Whatever his faults, no one can accuse Boris Johnson of a lack of enthusiasm when it comes to eye-catching projects and targets.

‘We believe that in ten years’ time, offshore wind will be powering every home in the country, with our target rising from 30 gigawatts to 40 gigawatts,’ the Prime Minister cried to the (virtual) Tory party conference yesterday.

Speaking as a committed environmentalist, I applaud in principle the shift away from fossil fuels to cleaner energy sources. But the wholly unrealistic pledge to power every home in Britain with wind energy within a decade was, quite frankly, entirely typical of this Government’s muddled thinking when it comes to future-proofing our energy supplies.

Even if Britain cranked up its wind power provision to the level the Prime Minister proposes, this amount would power only about half the homes in Britain – or 7 per cent of the total national energy demand. And that would only be when the turbines are turning.

Data company Aurora Energy Research has calculated that to reach 40 gigawatts by 2030, one new wind turbine will have to be installed around Britain every weekday for the entire 2020s – at a cost of some £50billion in capital investment.

I do not oppose wind power altogether: it has an important part to play in meeting some of the world’s energy demands.

Yet over time, like many environmentalists, I have come to realise that while renewable energy can and should be part of the mix, the idea that offshore windfarms can power huge parts of Britain’s national grid is simply not realistic. 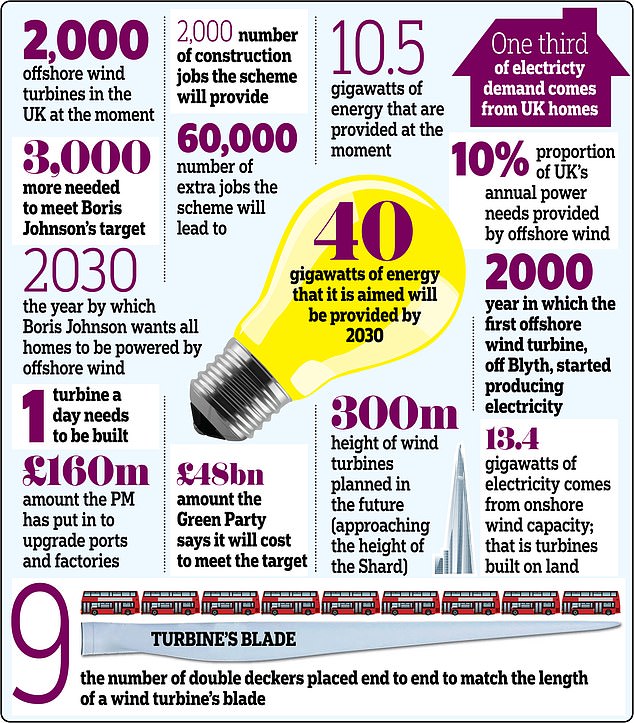 There is currently just under 10.5GW of wind in the seas around the UK, generating around 10 per cent of our electricity

Wind power is widely viewed as the safest, cleanest energy option – and it’s certainly safer and cleaner than gas, coal or oil. The problem is that it is nowhere near as reliable as they are.

In this year’s summer heatwave, for example, the UK went from sourcing 20 per cent of its energy from wind to sourcing just 4 per cent, a gap we plugged with imported, polluting coal.

On one especially windless day in October 2015, Britain’s wind turbines produced almost no electricity at all. The Government was forced to resort to using diesel generators to provide back-up power: hardly the ‘green industrial revolution’ of which Boris now speaks.

Anyone can understand that a piece of coal is stored energy. Wind power must be harnessed by a turbine and fed into the grid – or lost forever.

Batteries are an option to store the electricity generated from wind turbines – but they are hugely expensive (one big enough to store Britain’s electricity for a single day would cost an estimated £300billion) and themselves rely on polluting mining processes, rare minerals and must eventually be disposed of safely, so are hardly ‘green’.

Many experts believe that a big shift to wind power would see Britain’s energy bills soar.

We only need to look to the continent to see that a shift to wind power, whatever the fine intentions, can cause new problems.

Germany has spent billions of euros building more than 30,000 wind turbines but frequently on windless days, it has had to turn to high-emissions fossil fuels to make up shortfalls.

Meanwhile, a modern wind turbine is unlikely to last much longer than 20 years.

Though much of its components can be resold or recycled, the blades are a challenge: Most end up buried in giant landfill sites. Altogether: Not quite the cheap, clean, green answer to our problems that Boris seems to think it is.

So, given that it is paramount that we wean ourselves off polluting fossil fuels, what should the Government be doing? The truth is that we have only one hope of safeguarding our future energy supply. 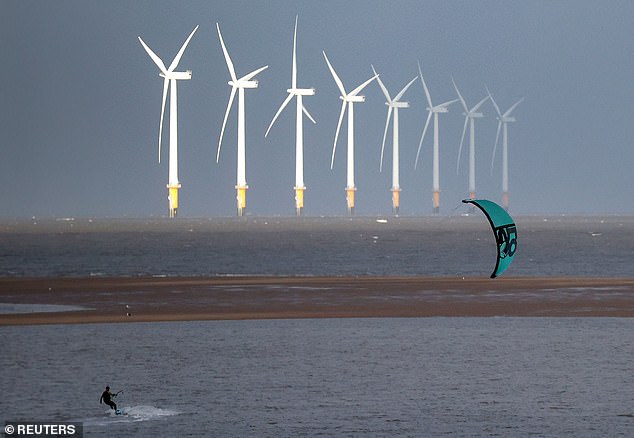 Wind power is widely viewed as the safest, cleanest energy option – and it’s certainly safer and cleaner than gas, coal or oil

Only this summer the Government announced that it was investing £40million to develop the next generation of nuclear energy technology in Britain. Yet the plans have stalled.

In Britain, reliable energy stands on a precipice. Seventies-style energy caps and rations, something none of us want, are inevitable unless ministers urgently prioritise this vital issue.

Everyone wants a safer, cleaner world for their children – and, for that, Government needs to make bold decisions. The shift to wind might look like that – but to me it all too closely seems like hot air.