Ukrainian President Volodymyr Zelensky and his wife Olena Zelenska have raised eyebrows after appearing in a glossy photoshoot for US Vogue.

The pair were pictured together for the piece by renowned photographer Annie Leibowitz – although the article primarily focused on Zelenska, 44.

Following the publication of the piece, conservative pundits and politicians seized upon the photo shoot as evidence that the United States should not have sent $40 billion in aid to Ukraine to help its war effort against Russia.

Republican Congresswoman Lauren Boebert tweeted an image of Zelensky and Zelenska together while saying: ‘While we send Ukraine $60 billion in aid Zelensky is doing photoshoots for Vogue Magazine. These people think we are nothing but a bunch of suckers.’

The article was written by Paris-based journalist Rachel Donadio. On Twitter, Donadio referred to the piece as: ‘One of the most moving and memorable assignments of my career.’

In the piece, Zelensky and his wife are shown together inside of their compound in Mariinsky Palace on the outskirts of Kyiv.

Volodymyr Zelensky and his wife, Olena Zelenska, have graced the cover of Vogue amid the ongoing war in their home country 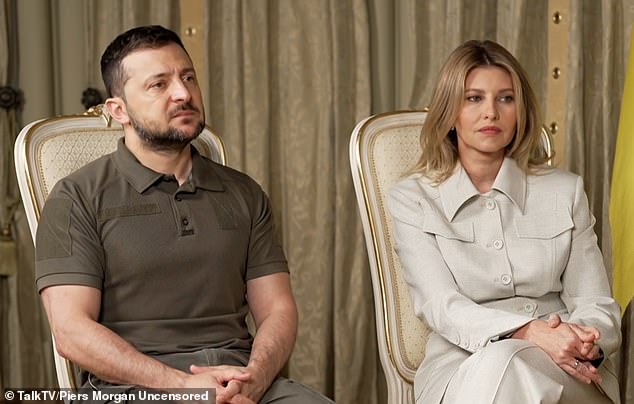 Zelenska told Vogue: ‘These have been the most horrible months of my life, and the lives of every Ukrainian’

In one photo, Zelenska is pictured beside the downed remains of the world’s largest plane, the Antonov AN-225. The cargo aircraft was sabotaged at an airfield in Kyiv by Russian operatives in February.

Zelenska told Vogue: ‘These have been the most horrible months of my life, and the lives of every Ukrainian.’

She went on: ‘Frankly I don’t think anyone is aware of how we have managed emotionally. We’re looking forward to victory. We have no doubt we will prevail. And this is what keeps us going.’

The former comedy writer also said: ‘I like being backstage—it suited me. Moving into the limelight was quite difficult for me.’

Conservative activist Scott Presler tweeted: ‘Why did we send $54 billion to Ukraine, so Zelensky & his wife could pose for Vogue? You’re at war & you’ve got time for photo shoots?’

Texas Congresswoman Mayra Flores tweeted: ‘Biden: Let’s continue to send billions of dollars in foreign aid to Ukraine, they need it!’ She added: ‘Reality: The Zelensky family graces us with a photo shoot to be on the cover of Vogue magazine.’

There is no evidence that suggests any of the $60 billion given to Ukraine by the Biden administration was used to pay for the photoshoot.

On the other side of the debate, Verizon executive Tami Erwin tweeted support for the piece.

Erwin said: ‘An outstanding profile. Olena Zelenska has done an incredible job representing her people, ensuring the world knows the story of women and children of Ukraine – and continuing to give voice to the many in need.’ 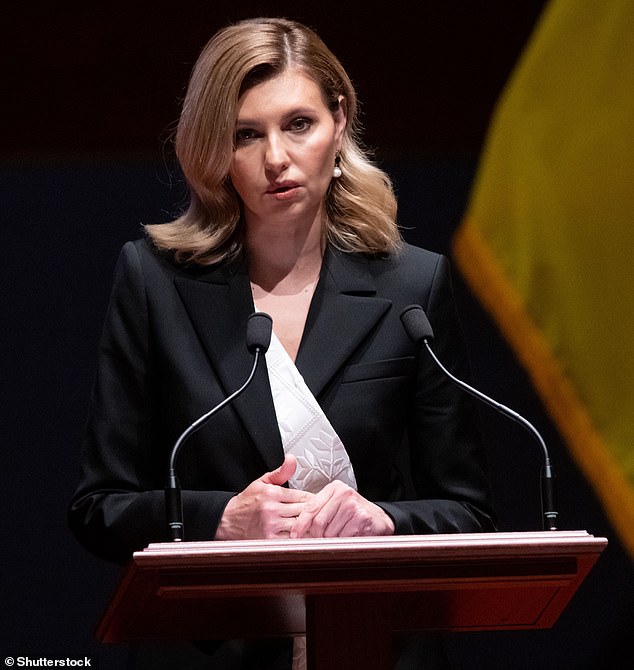 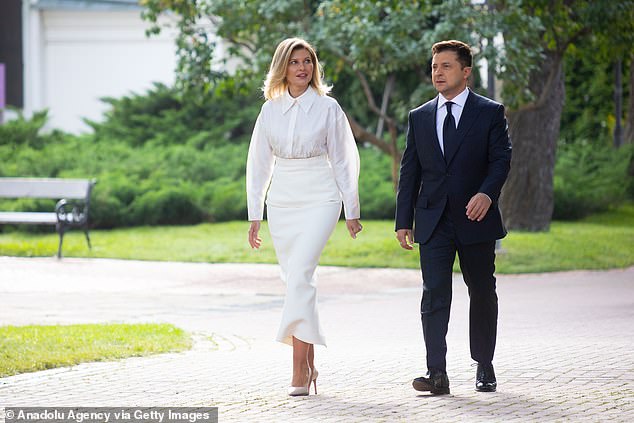 Ukrainian President Volodymyr Zelensky and his wife Olena Zelenska attended a Military parade held as part of the 30th anniversary of Ukraine’s independence celebrations in Kiev, Ukraine, on August 24, 2021 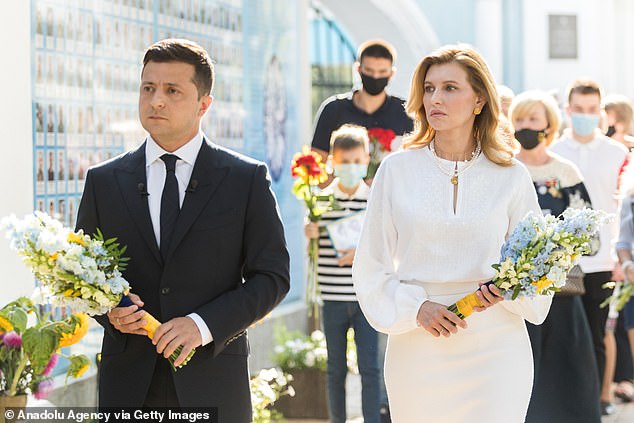 Pro Ukrainian activist Val Voschevska posted an analysis of the photoshoot on Instagram writing in part: ‘She is who she is and I love it. She looks like any of us after a long day at the office – the only difference is that her job is protecting her country from war.’

While a Ukrainian citizen wrote in the comments section under a picture of the the couple on Vogue’s official Instagram: ‘Thank you Vogue for bringing awareness about Ukraine from the voices of actual Ukrainians.’

Amid the row, Zelensky has also appeared on the cover of Wired magazine for their September/October issue.

He spoke to the magazine about the importance of being a good communicator, saying: ‘We are all in a social network. It is no longer about whether it is good or not; most of our lives are already online. People study online, get information; people read, people use it. This is our world now. It is divided.

‘The internet is a reality. It is not another world, but rather a modern reality. So if you want people to perceive you as you are, you must use what people use.’

‘The value of life has changed. So let’s say that my attitude has changed, as I do not pay attention to trivialities anymore, and there are clear aspects on which I am focused.

‘The question of the price of freedom, which we learned from books in school, has now become a reality. You know this price. You have seen the number of people who died.’ 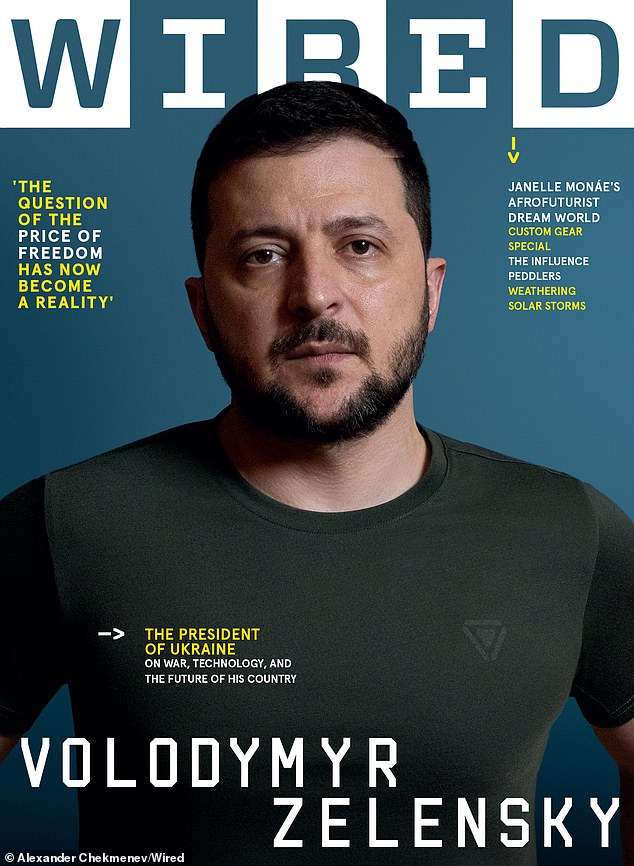 Amid the row, Zelensky has also appeared on the cover of Wired magazine for their September/October issue

Rep. Lauren Boebert was among those who was severely critical of the piece

According to the UN High Commissioner for Human Rights, more than 12,000 people have been killed in Ukraine since the start of the invasion. Millions more have been displaced.

When asked what it was like to know that her family’s movement are being watched by Russia, Zelenska said: ‘I can’t think about it too seriously, because otherwise I would become paranoid.’

In the piece, Zelenska explained what she did in the early weeks of the war, attempting to keep her mind off of the conflict by helping her children with their online schooling and rereading George Orwell’s dystopian novel ‘1984.’

She said of the book: ‘It’s a horrible coincidence. It’s a picture of what is happening in Russia these days.’

Speaking about his wife in the interview, the Ukrainian president said: ‘Of course she is my love. But she is my greatest friend. She is also a patriot and she deeply loves Ukraine. It’s true. And she is an excellent mother.’

The couple also recently sat down for an interview with Piers Morgan.

The Ukrainian president told his wife: ‘When you are talking, your opinion has priority. What I would say is I don’t have any other experience. I’ve got only one wife and I am happy. I have one wife, one love and one family. I never got any feeling there was anything wrong with us in or in our relationship. Or maybe do you feel unhappy with me sometimes?,’ according to the Daily Telegraph.

Zelensky continued: ‘The war is making our relationship stronger, that’s for sure.’ 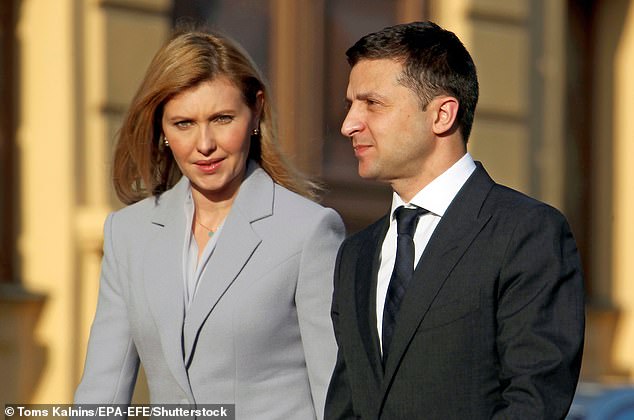 Zelensky and his wife First Lady Olena Zelenska have been married for 20 years. Pictured attending a wedding in 2019 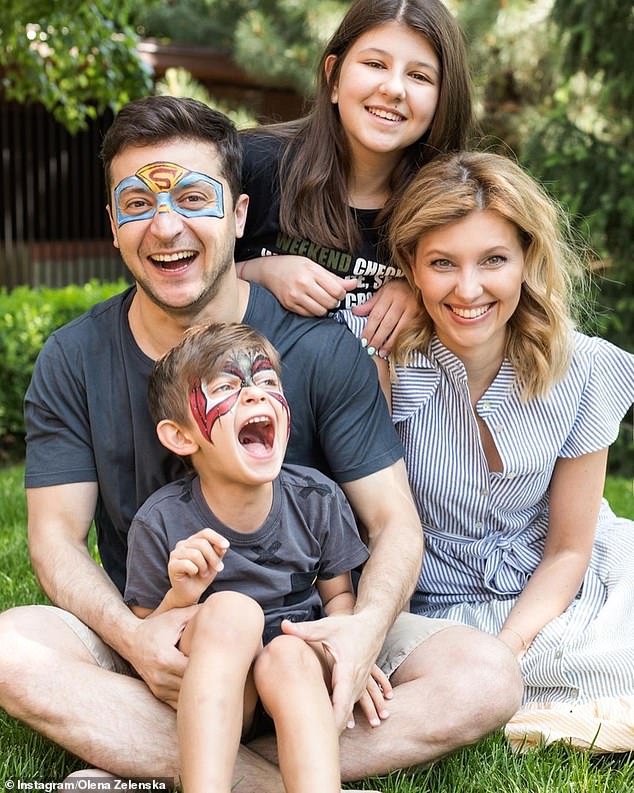 President Zelensky has been separated from his two children for security reasons since the war in Ukraine began early this year. Pictured here before war broke out in their home country