Inditex, which also owns Massimo Dutti, saw net revenues jump by €1.8billion to €6.7billion (£5.4billion) between February and the end of April, compared to €5.9billion during the same period three years ago.

It noted strong demand for its spring and summer collections, but the group has also raised prices more than rivals.

According to recent research from Swiss bank UBS, Zara has lifted its starting prices by at least 10 per cent year-on-year in each month since January, with prices rising by 18.5 per cent in April alone.

By comparison, average retail prices across European fashion brands, such as H&M and German online retailer Zalando, only hiked the cost of their goods by 4.2 per cent in the same month.

Higher prices helped Inditex’s gross margins climb to their highest level in a decade and net income surge by 80 per cent to £646 million.

Profits were limited by a one-off charge of £184million related to pausing operations in Russia and Ukraine.

Following the full-scale invasion of Ukraine on 24 February, the company shut all 79 stores and halted online trading in the country before doing the same nine days later in Russia, where it had more than 500 outlets.

The two territories were responsible for 5 per cent of the firm’s sales growth between the start of February and 13 March, while the latter was its second-biggest store market.

Inditex’s trading was further affected in markets where there had been tough Covid-19 restrictions, particularly in China, where the government has implemented one of the world’s harshest lockdown policies. 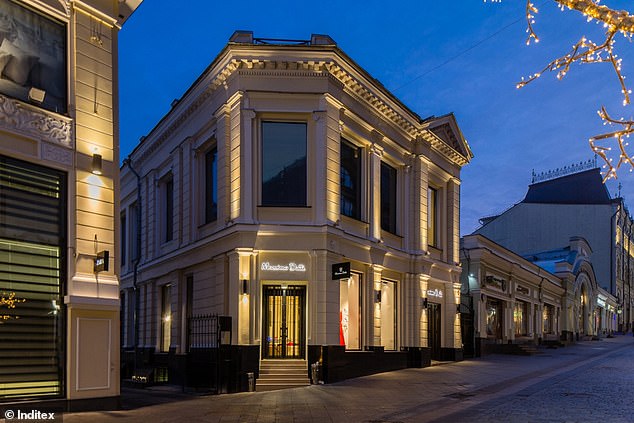 Close down: When it decided to halt operations in Russia in early March, Inditex ran more than 500 outlets in the country. (Pictured: Massimo Dutti store in Moscow, Russia)

Nonetheless, the group’s total sales have remained healthy since the beginning of May, with store and online revenues up to 5 June growing 17 per cent year-on-year against the record amount scored in 2021.

To try and manage supply chain problems and keep product availability levels stable, Inditex has followed other clothing and retail businesses and bulked up its inventory by around €750million.

Laura Hoy, an equity analyst at Hargreaves Lansdown, called the move by Inditex ‘unsurprising’ given that ‘stock availability is a key challenge in the retail world right now.’

Yet she warned: ‘This inventory-stocking has the potential to backfire if economic conditions continue to worsen and customers eventually close their wallets.

‘For now, that doesn’t appear to be an issue for Inditex, whose trendy clothes continue to earn it a spot on dwindling budgets. But it’s something to be mindful of moving forward.’