Zara McDermott and Sam Thompson broke Tier 4 travel regulations by jetting off to the Maldives for a romantic New Year’s break.

The reality TV pair were spotted flying out of London last Sunday on December 27 – a week after rules came into place banning travel from Tier 4 areas on December 20.

Former Love Island star Zara, 24, has continued to share photos on her Instagram, marking her location as London, United Kingdom.

Fans have accused the Made In Chelsea couple of disguising the fact they were abroad by altering timestamps and sharing pre-recorded content on social media.

Rule breakers: Zara McDermott and Sam Thompson broke Tier 4 travel regulations by jetting off to the Maldives to spend a romantic New Year’s together (Zara in the Maldives in Dec 2019)

A source told MailOnline Zara and Sam, who live together in west London, stayed at luxury resort Ayada Maldives, where they previously visited in December 2019.

On Monday night, Zara uploaded a photo of her to promote her new edit with fashion brand Missguided, tagging the location of the Instagram post, ‘London, United Kingdom.’

Last week she posted an image taken in London, again tagging the capital as her location, despite being in the Maldives.

Zara’s boyfriend Sam, 28, has refrained from posting at all on social media since flying out of the country. 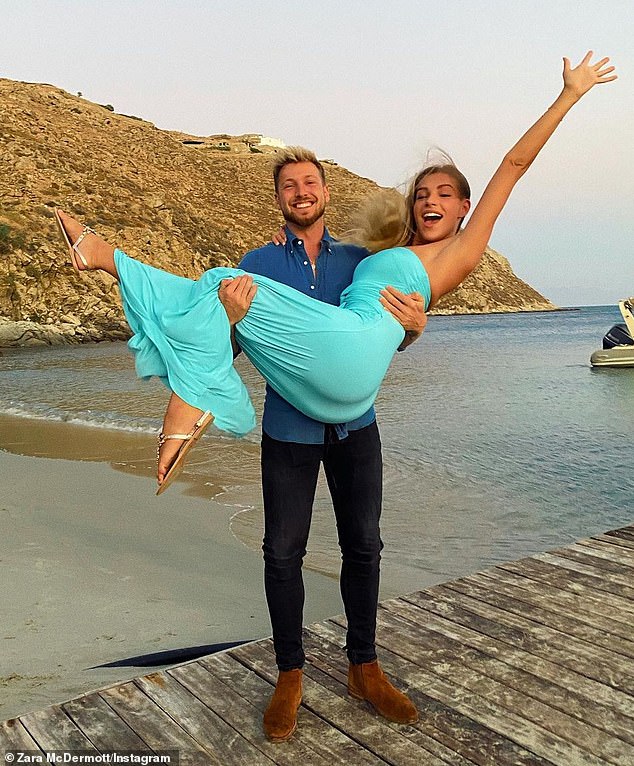 Jet off: The reality TV pair, who reconciled in December, were said to have been spotted flying out of London last Sunday on December 27 (Zara and Sam in Mykonos in July 2020) 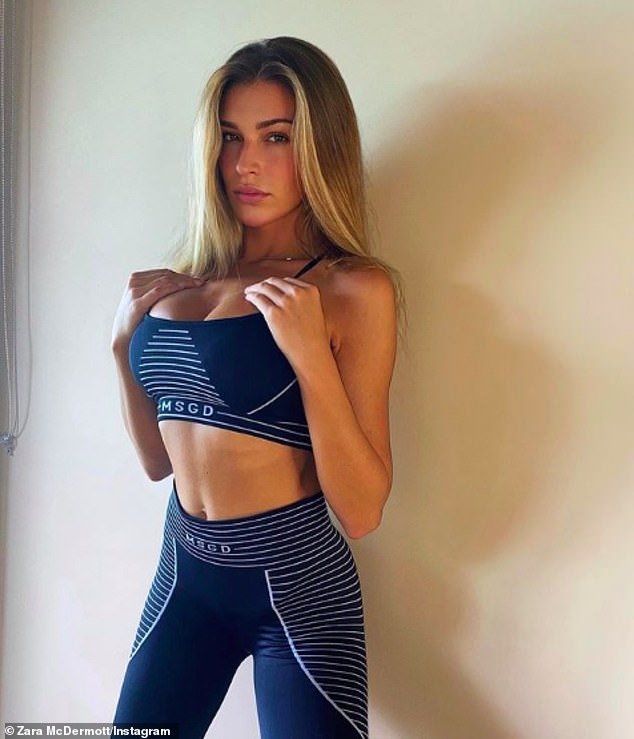 ‘So excited’: On Monday, Zara uploaded a photo of her to promote her new edit with fashion brand Missguided, tagging the location of the Instagram post, ‘London, United Kingdom’

Fans of the couple became suspicious of their whereabouts last week, when eagle-eyed followers spotted something was off with Zara’s Instagram Stories.

Last Tuesday, Zara shared an old video of her watching Sam on the PlayStation, urging other girlfriends of ‘gamers’ to respond with ways of irritating their partners as they compete.

Zara then started to share screenshots of comments sent by her fans on her Instagram Stories – with one showing her local time to be 11:14pm, instead of just gone 7pm as it was in the UK.

In a swiftly-deleted Instagram story, Zara posted a response from a fan, which read: ‘Accidentally unplug the TV whilst plugging the hoover in or just hoover in front of the TV’ alongside the comment: ‘This is a good one. “Babe I’m cleaning? Why are you complaining?”‘

After viewers spotted her local time, the next interaction reflected the correct time in London. 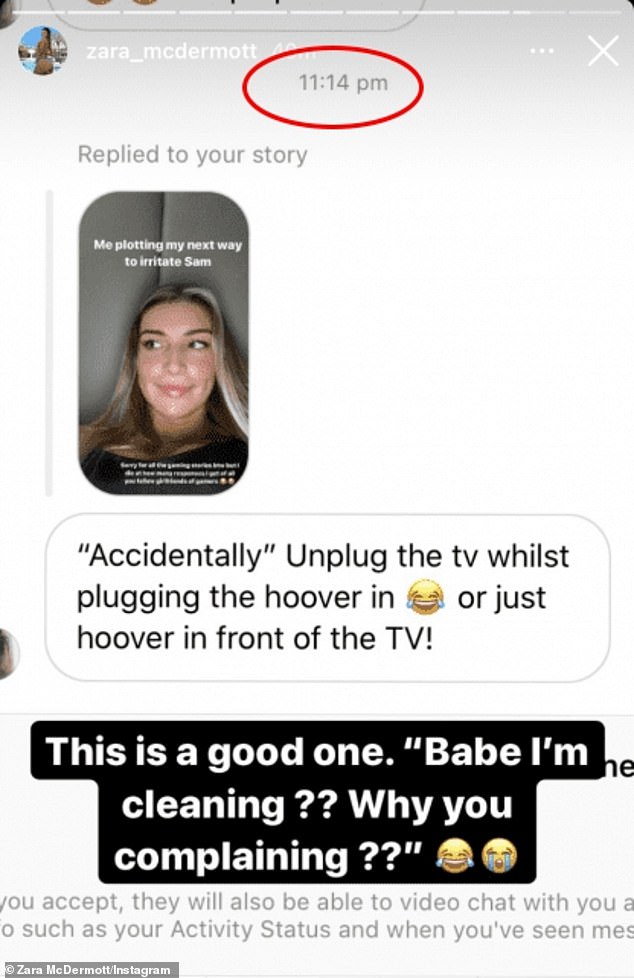 Caught out?: Fans have accused the Made In Chelsea couple of trying to disguise the fact they’re abroad by altering timestamps and sharing prerecorded content on social media 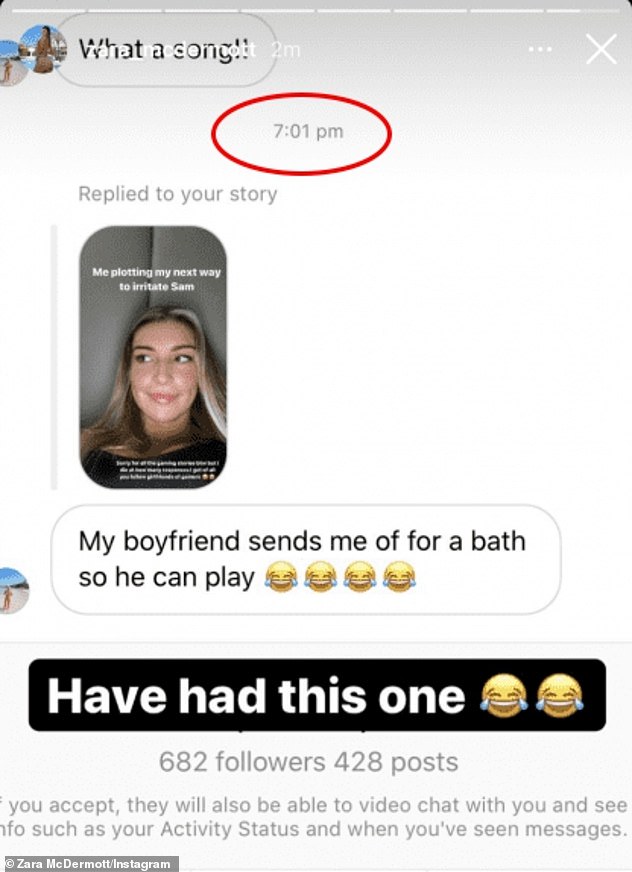 Slip up?: Last Tuesday, Zara shared screenshots of messages she had received to her Instagram Stories, showing a different time zone before they changed to reflect the time in London 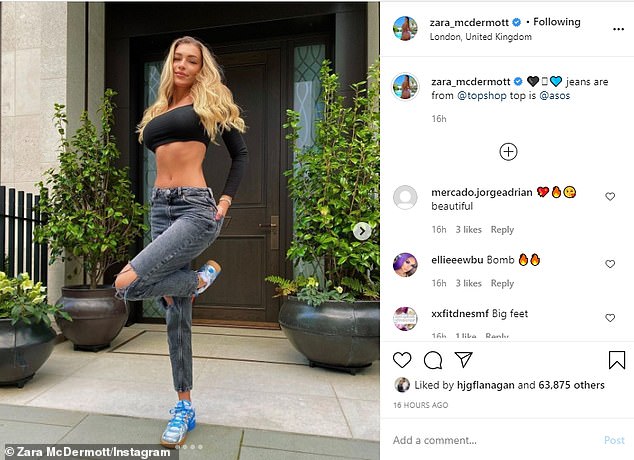 ‘Rumbled’: Last Tuesday, Zara posted a picture of her on Instagram and tagged ‘London, United Kingdom’ as her location despite fans claiming she is in fact holidaying in the Maldives

A source told MailOnline: ‘Zara has been posting pre-recorded content – but she messed up.

‘She posted screenshots of messages she had received to her Instagram Stories showing a time zone, which is hours ahead of the UK.

‘As soon as followers started commenting, she quickly deleted the stories.’

A second source added: ‘Zara has been rumbled. Once her followers pulled her up, she quickly deleted all the evidence.

‘Sam has gone silent on his Instagram, which is probably the more sensible thing to do.’ 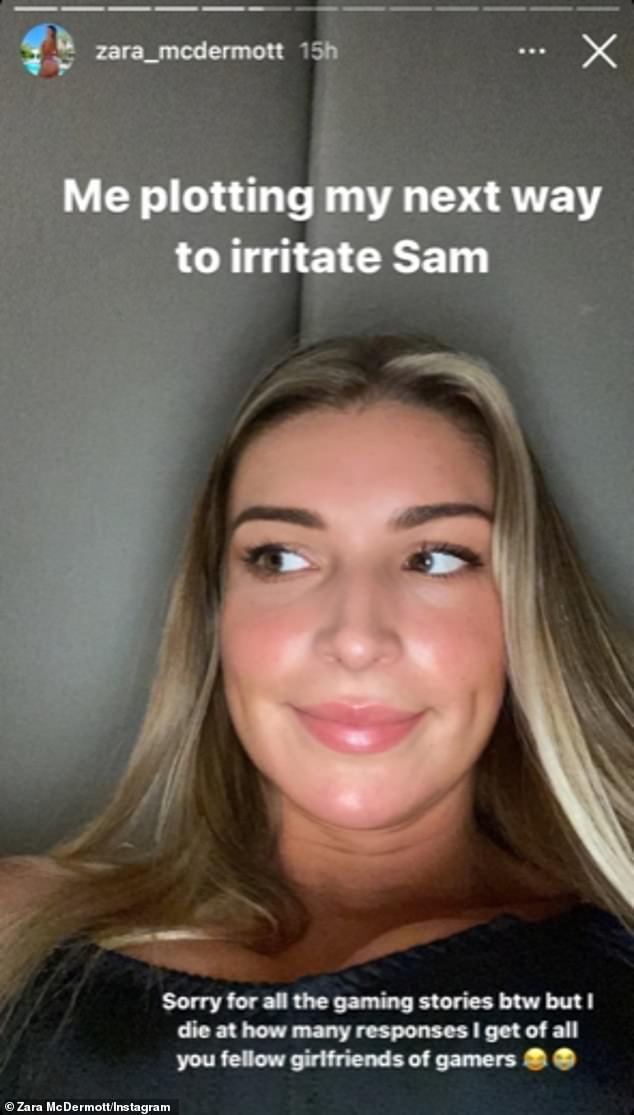 ‘Plotting my next way to irritate Sam’: Zara urged her followers to comment on ways they annoy their gamer boyfriends, seemingly showing her and Sam to be at their home in London 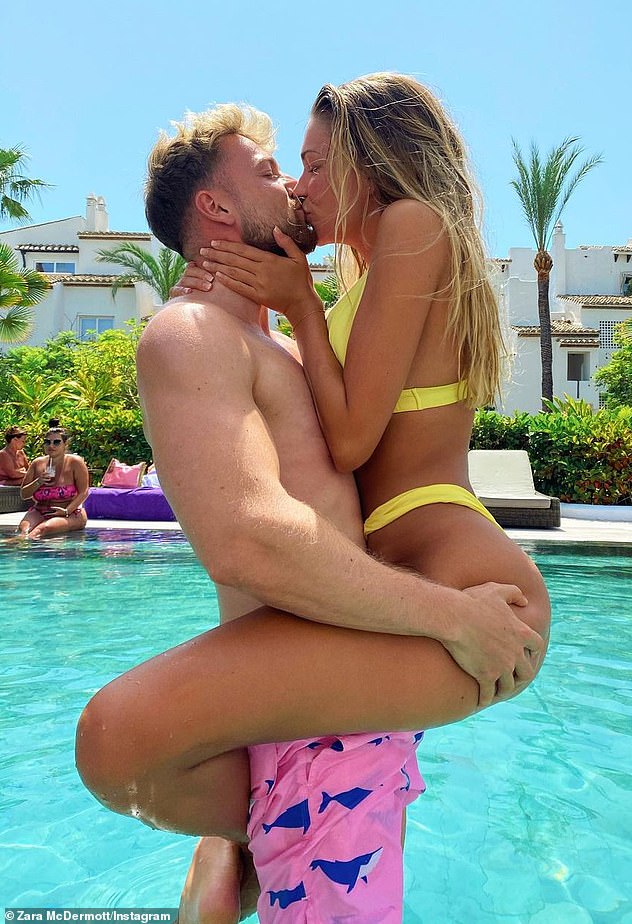 Loved up: Zara and Sam, previously pictured on holiday in Marbella last July, have been ‘outed’ by their Instagram fans who claim the couple celebrated the New Year in the Maldives

Prior to their break-up, Zara and Sam had planned a luxurious trip to the Maldives in November alongside Sam’s sister Louise Thompson, 30, and her fiancé Ryan Libbey, 30.

The couple, who rekindled their relationship in December, missed out on the holiday, with Zara sharing a post longing to be on the idyllic getaway.

She captioned one image of her in a neon bikini: ‘Meant to be in the Maldives right now but whatever.’

Sam and Zara last jetted off to the Maldives together in December 2019.

They previously shared a number of Instagram posts from their break – while this time round have refrained from posting any loved up photos.

Representatives for both Sam and Zara have not responded to numerous requests for comment. 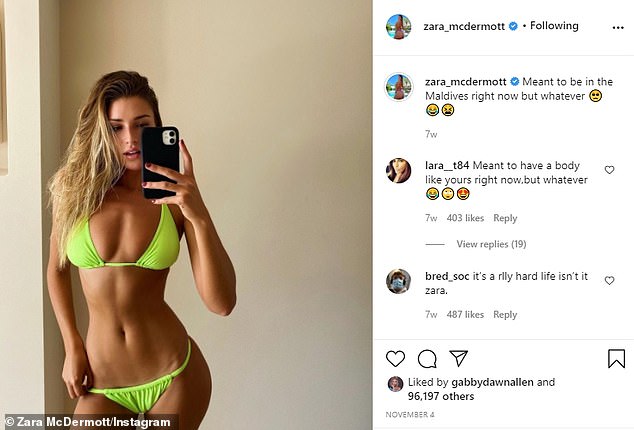 ‘Meant to be in the Maldives right now but whatever’: Prior to their breakup, Zara and Sam had planned a trip to the Maldives in November alongside Louise Thompson and Ryan Libbey

TIER 4 RESTRICTIONS – WHAT ARE THE RULES?

In Tier 4, no household mixing is allowed, though one person can meet one other person outside in a public space

You cannot meet other people indoors, including over the Christmas and New Year period, unless you live with them, or they are part of your support bubble

Outdoors, you can only meet one person from another household

All hospitality is closed, except for takeaways and deliveries, and accommodation and entertainment venues must shut

Travel exceptions are only allowed for reasons such as work, education and childcare. Leisure travel abroad is not permitted

At the point of Zara and Sam’s flight to the Maldives, London was under Tier 4 restrictions.

Travel abroad for leisure is banned under Tier 4 guidelines with exceptions only allowing reasons such as work, education and childcare.

The Foreign and Commonwealth Office advises against all but essential travel to the Maldives.

All travellers over the age of 11 must undertake an obligatory test for COVID-19 within 96 hours before departure. The traveller must show proof of a negative result before embarking.

In Tier 4, no household mixing is allowed, though one person can meet one other person outside in a public space, while all non-essential shops and businesses must close, including personal care and indoor entertainment.

Nobody can enter or leave Tier 4 areas and residents must not stay overnight away from home.

While enjoying their holiday, the country has been plunged into a third lockdown, with Prime Minister Boris Johnson confirming the message from the government is to now ‘stay home, protect the NHS and save lives.’ 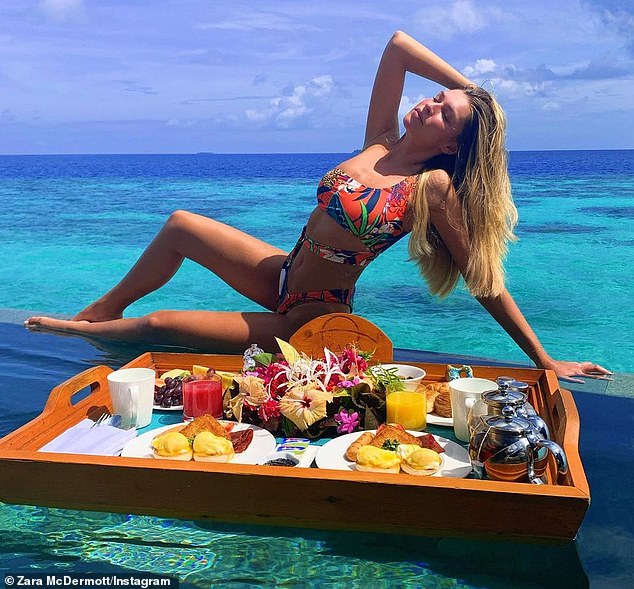 Zara and Sam are the latest reality stars in a long list to be accused of breaking rules by flying overseas.

Last week, Vogue Williams, 35, was photographed in St. Barts despite having expressed upset at being unable to visit her native Ireland due to the current travel restrictions.

Former Islanders Demi Jones, 22, Georgia Steel, 22, Amber Gill, 23, and Joanna Chimonides, 24, are also in Dubai, while model Abbey Clancy, 34, and her footballer husband Peter Crouch, 39, have recently returned from a festive trip to the UAE. 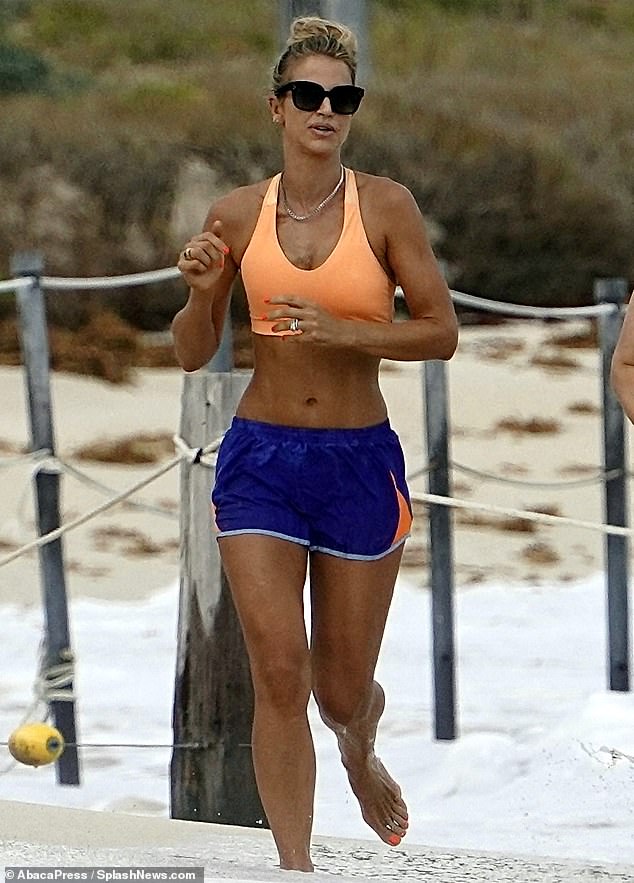 Rule break: On Tuesday, Vogue Williams was photographed in St. Barts despite having expressed upset at being unable to visit her native Ireland due to the current travel restrictions

Sam’s sister Louise was accused of breaking Tier 4 travel restrictions last week when she posted a photo of her that fans recognised as being in Devon, while tagging her location as London.

One fan commented: ‘Have you travelled out of Tier 4?’ while another said: ‘You are so not in London.’

Zara and Sam’s holiday is their first since they rekindled their romance last month.

The pair split in September after Sam learned Zara cheated on him at the beginning of their romance while she competed on X Factor: Celebrity.

Their break-up was filmed for Made In Chelsea – as well as their reconciliation, with Sam agreeing to give Zara a second chance at being his girlfriend.