Dragons centre Zac Lomax might have won the match for his team but has earned the ire of the NRL community for his ‘rubbish’ celebrations with former teammate and Newcastle forward Tyson Frizell.

It was a tough encounter between the Dragons and Knights but Lomax had a brain fade when he decided to leap all over Frizell in celebration when the Dragons scored a crucial try.

Lomax leaps on his former teammate Frizell after Jack Bird of the Dragons scored a crucial try in their clash against Newcastle on Sunday. 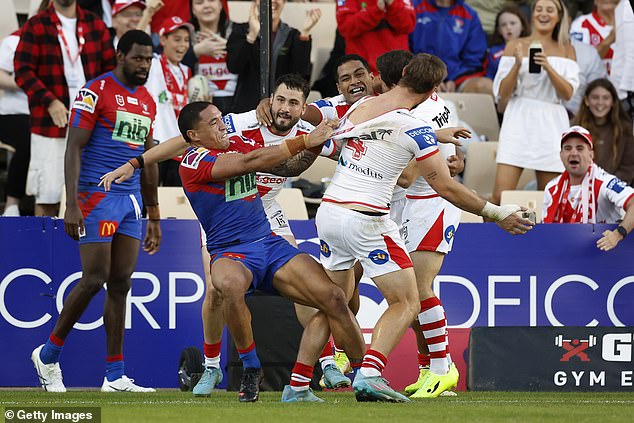 His antics were not well received on or off the field. Frizell, a former Dragon, slammed Lomax to the ground and Knights enforcer David Klemmer delivered a verbal spray after the siren.

Lomax might have had the last laugh with a match-winning performance including the one-on-one strip and consequent field goal that secured victory, but he has copped a torrent of criticism for his celebrations with Frizell – in addition to being hit with a grade one contrary conduct charge by the NRL.

Only difference between Zac Lomax and God. God doesn’t get around thinking he’s Zac Lomax! #EasterJokes

Phil Gould led the outrage while commentating on Channel Nine.

‘You could injure someone’s knee or back or anything like that.

‘He’s not your teammate.’ 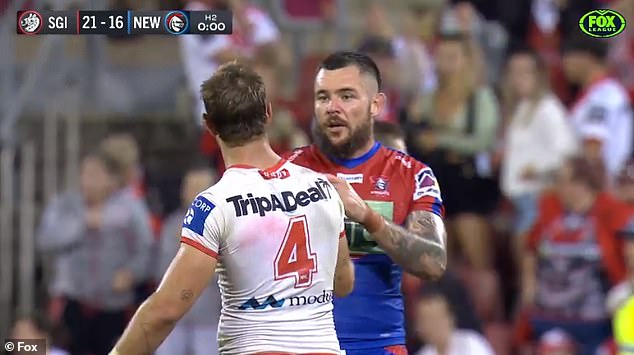 Newcastle forward Klemmer had a few choice words to say to Lomax after the thrilling contest that Lomax sealed with a late field goal.

Over on Fox Sports, commentators Andrew Voss and Greg Alexander were equally unimpressed.

‘That’s ordinary from Zac Lomax… and then he’s thrown down. It’s (got) a touch of Lachlan Lewis about it,’ Voss said.

Surely it’s time for the @NRL to introduce an anti-taunting rule like in the NFL and NBA? What is this rubbish that’s creeping into the sport like Zac Lomax today and Stephen Crichton last year? @FOXNRL #nrl360 @awebster1975

‘Zac Lomax has gone in and hopped on the back of Tyson Frizell and then Tyson has thrown Zac Lomax down.

‘That’s just ordinary. No apologies, Zac Lomax you are kidding yourself… you deserve that and more.’

Alexander added:  ‘He might have been a teammate but you’re not doing that in the heat of the battle,’ Alexander said.

‘It was stupidity… That is rubbish.’

While Frizell was upset in the heat of the moment, the fiery second-rower has been guilty of a similar brain snap in the past.

While celebrating James Tedesco’s match-winning try in game three of the 2020 State of Origin series, Frizell collected Queensland player Will Chambers and knocked him out of the way – much to the Maroons player’s disgust.

Lomax tried to laugh it off after the game, but admitted he got scared when Frizell fired up over the celebration.

‘Old friends and I just sort of thought he’s too good of a player so I just thought whatever I could do to put him off his game,’ Lomax said after the match.

‘He’s so hard to handle and you’ve seen how damaging he is. He’s obviously been missed here at the Dragons but it was all friendly banter, that’s for sure.

‘I’m not trying to get on his bad side, but I sort of did. I was a bit scared there at one point.’

The Zac Lomax incident on Frizell comes from stupid try celebrations. An absolute clown. NRL Players act like you have scored or witnessed a try before. Some absolute carry on jumping on top and over each other regardless of score. #NRL #NRLDragonsKnights

Lomax’s actions were not received well by his coach and captain, either.

‘I will (have a word to him), Dragons coach Anthony Griffin said.

‘It was something that wasn’t needed.

‘We are learning – it was a big play, the steal he came up with and then the field goal.

‘He came up with some really big plays tonight and ran a lot of metres.’

Bring Amone and Sloane back in, sit Zac Lomax down for a few weeks. He’s getting a bit big for his boots. He’s not Mark Gasnier yet.

Captain Ben Hunt said  Lomax did well to shake off the incident and deliver the match-winning plays, but said the centre needed to focus on his footy.

‘I wouldn’t say he was rattled – he came up with some pretty good plays for us,’ Hunt said.

‘Zac has got to let his footy do the talking – we know he has got a lot of talent.’