EXPRESS INFORMER > News & Politics > You’ve GOT to get a goat! Devotee KATE HUMBLE reveals why

There’s no creature quite like a goat. Fantastically naughty, equipped with the escapology skills of Houdini, tough yet capable of being out-and-out divas.

They have character in spades and an ability to charm even the hardest heart. They may have just munched their way through your favourite fruit tree, but with a look and a nudge, all is forgiven.

So I can quite understand why Penny Lancaster this week declared she has fallen in love with her three new pygmy goats, Rupert, Biscuit and Hazel.

And she is not the only celebrity to have become a mad goat lady.

There’s no creature quite like a goat. Fantastically naughty, equipped with the escapology skills of Houdini, tough yet capable of being out-and-out divas, writes Kate Humble (pictured) 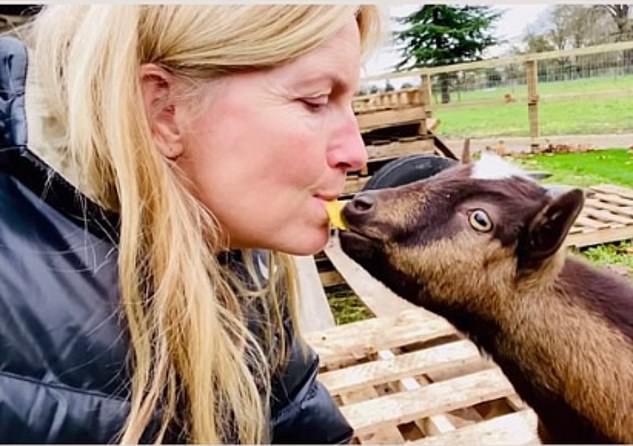 So I can quite understand why Penny Lancaster (pictured) this week declared she has fallen in love with her three new pygmy goats, Rupert, Biscuit and Hazel

The Marchioness of Bath, Emma Thynn, and singer Leona Lewis love kidding about with their goaty pals, too.

I’m sure Penny will have fleets of them in all colours and sizes in a couple of years because — take my word for it — once you take on a goat (or three) you never look back.

I’ve always had a bit of a thing for them.

It’s not just their incredible eyes like television screens, with the rectangular pupils that seem to be able to look everywhere — they are just generally brilliant animals.

Incredibly adaptable, they can (even if they shouldn’t) eat anything. I think this is probably the root of my goat admiration.

When I was about nine years old, I went on a school trip to the Cotswold Farm Park, which was run by Joe Henson, the father of my friend and fellow presenter Adam Henson. 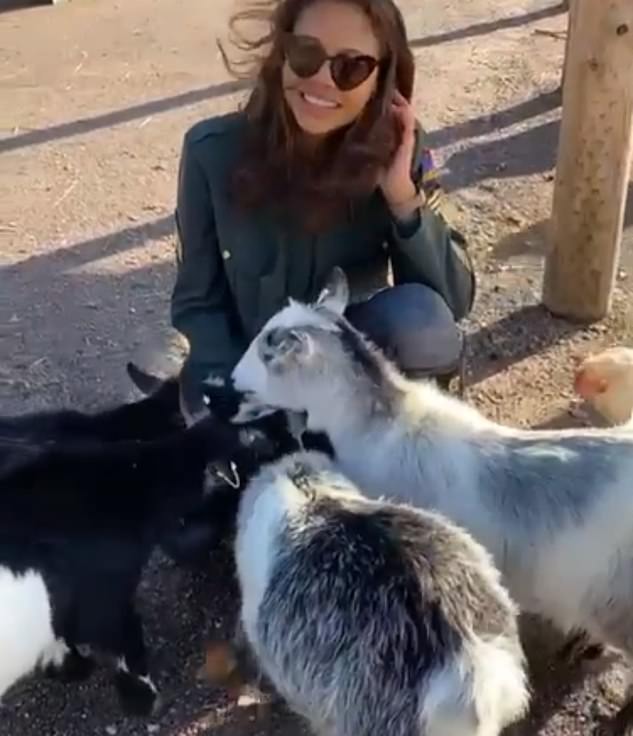 The Marchioness of Bath, Emma Thynn, (pictured) loves kidding about with their goaty pals, too 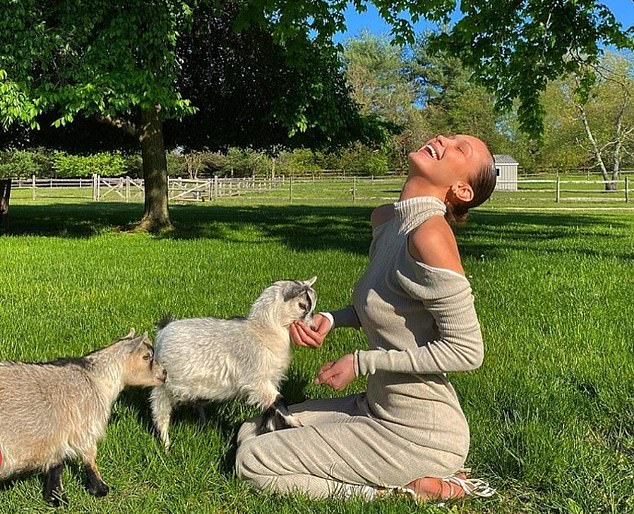 Penny Lancaster is not the only celebrity to have become a mad goat lady (Bella Hadid, pictured)

We were tasked with finding answers to a sheet of questions given to us by our teacher, which we were supposed to complete and hand in at the end of the day.

I can’t recall who was holding the paper, but a goat quite cheerfully took it, leaving us to return to our teacher and say, in all honesty: ‘Sorry miss, the goat ate our homework.’

So in 2007, when my husband Ludo and I decided to swap London for a smallholding in rural Wales, it was only a matter of time before goats arrived in our lives.

That moment came when we took on a 117-acre farm in 2011, where we teamed up with tenant farmers Tim and Sarah Stephens and set up a rural skills centre and farm.

Ludo and Tim, my farming mentor, did give me a bit of a look when I announced we must have goats.

But it was easy enough to get my way after I phoned a friend for advice and discovered that he just happened to have two goats, Honey and Biscuit (my Biscuit came first, Penny), who had been hand-reared by his children and were in need of a home. 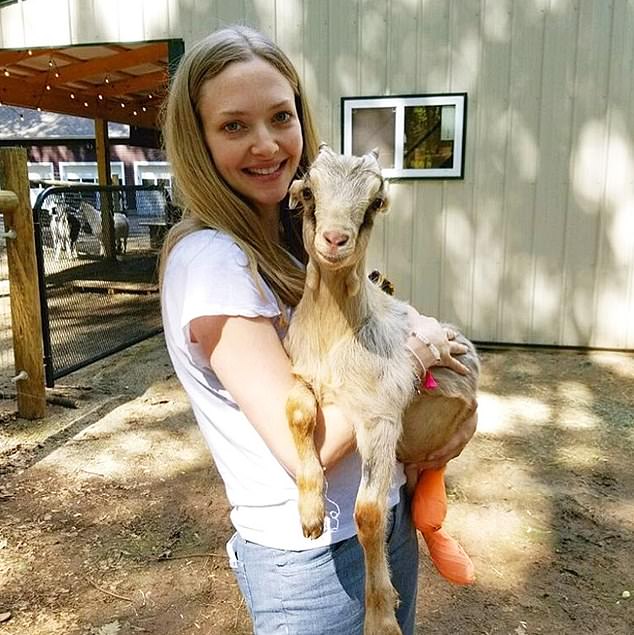 I’m sure Penny will have fleets of them in all colours and sizes in a couple of years because  once you take on a goat (or three) you never look back (Amanda Seyfriend with a goat, pictured)

So enter Honey and Biscuit, who were irresistibly mischievous from the start.

We discovered very quickly that a wall is a climbing frame — not a barrier — to a goat.

During the first heavy downpour after their arrival, the sound of frantic bleating drew us outside where we found the pair, not in their wall-enclosed field, but roaming around the yard.

This was my second lesson: goats do not like rain. It means, however, they make the most brilliant weather forecasters.

After that first escape we started to notice that every now and then they would crowd up to the gate and bleat like the world was about to end.

Then a pattern emerged: two hours later it would start to rain, at which point they would melt down. 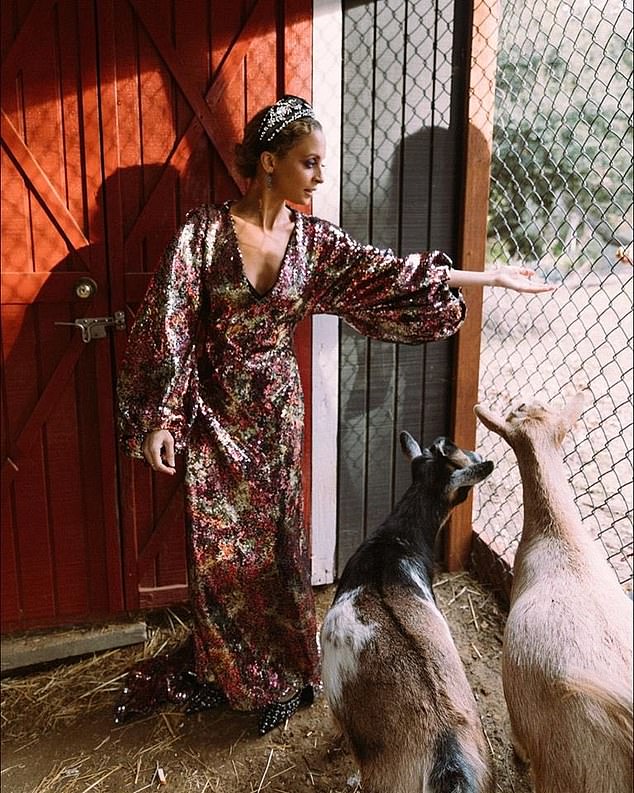 Incredibly adaptable, they can (even if they shouldn’t) eat anything. I think this is probably the root of my goat admiration (Nicole Richie pictured with goats)

Because while goats are tough in some ways — popping out kids without blinking, for example — they, like any self-respecting diva, cannot get their hair wet. It is literally the worst thing that can happen to a goat.

At that stage we had them in a field because we thought they were basically like sheep, only not as woolly; sheep will happily roam around outside all year. Not goats.

At vast expense we had to build a field shelter so they have somewhere to go when it rains, which it does fairly frequently around these parts.

Sometimes they hang out with Dilys and Dora, our donkeys, and they will go in with the sheep — but at this time of year they just want to be inside.

Other than shelter they need hay and some hard feed, access to lots of clean water and things to climb on. 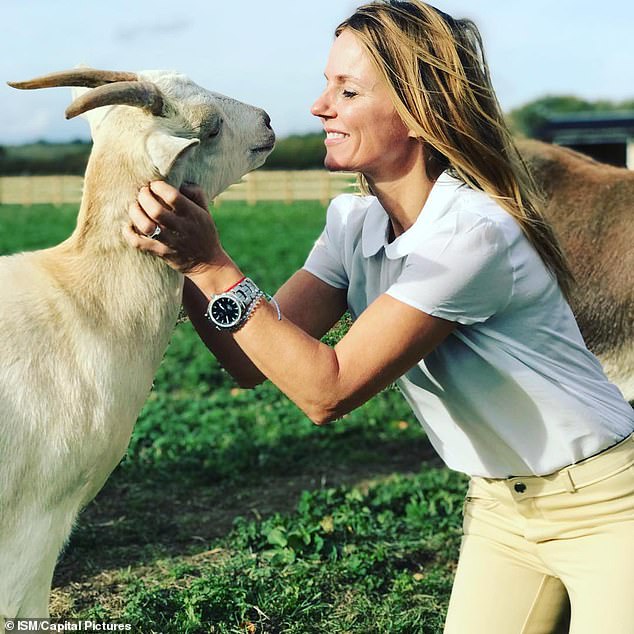 While goats are tough in some ways — popping out kids without blinking, for example — they, like any self-respecting diva, cannot get their hair wet (Geri Halliwell, pictured)

This week I have been working with Tim on building a new barn — a goat hotel, if you like. It’s frankly ludicrous how pampered they are.

But things have expanded somewhat since 2011, and more goat space is required now that we have 12 of them.

It’s a mix of Honey and Biscuit’s progeny — they have been very good mums and must have had ten kids each — and others we have bought in.

Our original two must be about 200 in goat years and are remarkably robust, though they haven’t had kids for a couple of years and have become the matriarchs of the gang.

These days, they tend to leave the acrobatics to the younger ones.

Apart from the billies, who we bring in when it’s breeding time, Honey and Biscuit are the only goats with names.

They are Golden Guernseys crossed with a Boer — a South African goat, principally a meat breed — and don’t say it in front of Honey and Biscuit, but they are bloody delicious. 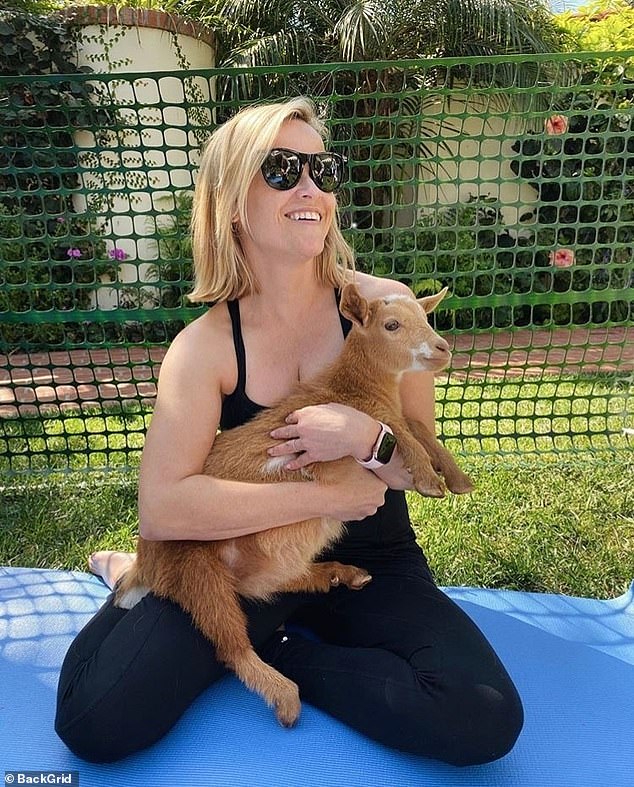 But the goats? They are like girlfriends, the ones you drink and dance to Abba with, even when you know you shouldn’t (Reese Witherspoon, pictured)

Because, yes, shocking as it may sound, I admit that one reason for keeping goats is the meat they produce.

The goats we breed are either sold to people who want to raise goats, or we eat them.

I can’t be building goat hotels in the torrential rain if I’m not getting something back, and a slow roasted shoulder of goat is reward enough.

We have it for Christmas quite often. Goat meat is very lean and lower in cholesterol than chicken, so to fully appreciate its flavour — which is not dissimilar to lamb, only not as rich — it needs long, slow cooking.

I use lots of herbs and wine and cook it for about four hours so it is meltingly soft and delicious.

I’m never going to eat Honey and Biscuit, that’s not going to happen, but we are a farm, not a petting zoo.

And I do aim to be responsible for the food I eat. I like to know how the animal has been cared for and where it has come from, and in the case of our own animals, I have visited the small, local slaughterhouse that we use.

All our goats get the best care, not just those with names. They are hardy so don’t need much intervention, but — like sheep — they do need regular pedicures. 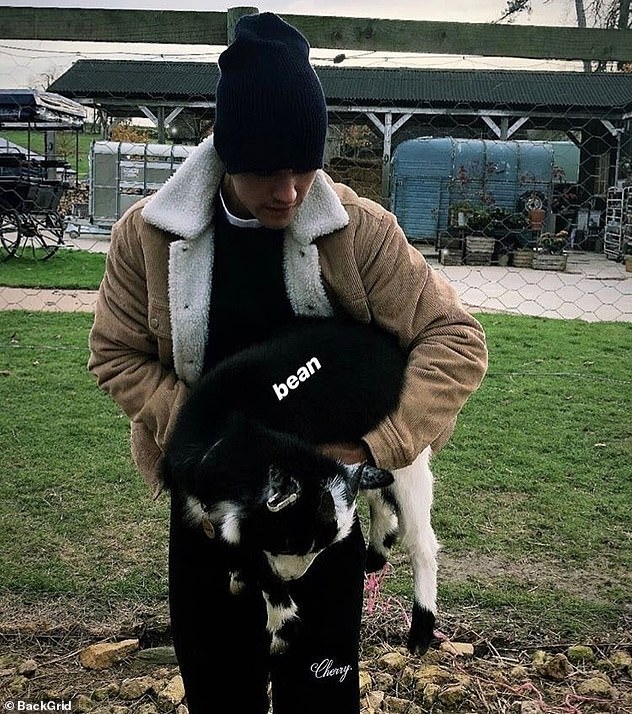 Incredibly adaptable, they can (even if they shouldn’t) eat anything. I think this is probably the root of my goat admiration (pictured, Justin Bieber)

Sheep, however, don’t mind having their feet seen to. Goats? They scream the place down. It’s the same when we have to tag them.

Sheep look a bit affronted, but goats will be massive drama queens.

Speaking of drama, I was persuaded a few years ago to do a photoshoot for Hello! magazine, with all the fuss a glossy magazine shoot entails.

Honey, who was to be my co-star, was unsettled from the start. She had clearly decided that the whole thing was ludicrous and that I looked ridiculous.

Every time they tried to take a photograph, she would come up behind me, rise up on her back legs and give me a massive head butt, as if to say: ‘Do you know how stupid you look?’

Funnily enough, they have never asked me to do a shoot again. Drama aside, I like to think Honey and Biscuit are as fond of me as I am of them.

We were recently taking some photographs for the Christmas special of Escape To The Farm, which will be on Channel 5, and the lovely cameraman, who is also a brilliant photographer, caught a picture in which they both look pleased to see me.

Of course, in reality they were fighting over my cup of tea (recent discovery: goats love tea).

So how do I sum up what goats bring to my life?

Well, you go to a pig for comfort — if you are feeling a little glum then a piggy hug is a fantastic way to cheer yourself up. It’s like going to see your mum.

But the goats? They are like girlfriends, the ones you drink and dance to Abba with, even when you know you shouldn’t.

Basically, they’re a little bit like me; sometimes cantankerous and occasionally bitchy, but great fun.