Jawed Karim, one of the three founders of YouTube, has slammed the platform’s decision to remove dislike counts on videos, which he said will turn YouTube into a place ‘where everything is mediocre’ and lead to its decline.

YouTube’s decision, made earlier this month, hides the number of times other users have clicked the ‘thumbs down’ icon under videos to indicate their displeasure.

YouTube said the change will prevent groups of malicious YouTube users from deliberately going after other users by bumping up the dislike count on their videos – what it called ‘coordinated dislike attacks’.

But according to Karim, the ability to easily and quickly identify bad content is ‘an essential feature’ on YouTube, and taking this away could lead to the site’s decline.

Karim made his displeasure known by editing the description of the first ever video uploaded to YouTube – entitled ‘Me at the zoo’ – in which he stars as a 25-year-old.

Jawed Karim, one of the three founders of YouTube, appeared in the first video ever uploaded to YouTube, on April 23, 2005. Pictured is a still from the video, which is entitled ‘Me at the zoo’

On November 10, YouTube said it is hiding dislike counts on videos.

Users can still hit the dislike button on videos.

But they can’t see how many dislikes each video has, unless they uploaded the video.

Creators can find the dislike count ‘on the back-end’ inside Studio Analytics, under the Engagement tab.

YouTube had tested hiding dislikes earlier in 2021 and found the change was successful at reducing ‘coordinated dislike attacks’.

The change started rolling out the same day, November 10.

Karim, now 42, founded YouTube with Chad Hurley and Steve Chen in February 2005, but it was sold to Google less than two years later.

‘Why would YouTube make this universally disliked change?’ says Karim in the updated description. ‘There is a reason, but it’s not a good one, and not one that will be publicly disclosed.

YouTube’s decision to hide dislike counts from the public was announced on November 10 in a blog post.

Matt Koval, ‘creator liaison’ at YouTube, also goes through the decision in a video.

As Koval explains, the dislike button is staying where it is, so users can still hit the thumbs down if they don’t like a video, but how many dislikes a video has is only visible to the video’s creator.

Videos that are seen to have higher dislike counts could negatively and unfairly impact YouTube creators, many of whom rely on their videos for income.

‘Unfortunately, research teams at YouTube has found there’s this whole other use for disliking a video that I had never experienced,’ Koval says. 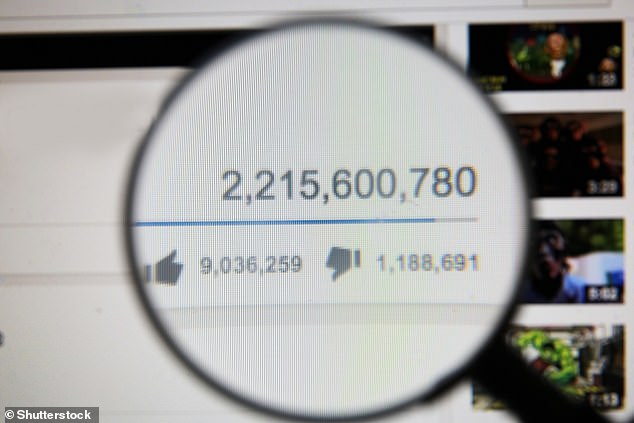 On November 10, YouTube said it is hiding dislike counts on videos on the basis that groups of users can use it to harm creators

‘Apparently groups of viewers are targeting a video’s dislike button to drive up the [dislike] count, turning it into something like a game with a visible scoreboard, and it’s usually because they just don’t like the creator or what they stand for.’

But Koval seems to address the decision without much passion, prompting Karim to say in his post: ‘I have never seen a less enthusiastic, more reluctant announcement of something that is supposed to be great.’

Karim compared Koval’s announcement to footage of US soldier and prisoner of war Jeremiah Denton, who famously blinked the word ‘torture’ using Morse code in a Vietnamese propaganda video in 1966.

‘The spoken words did not match the eyes,’ Karim writes.

Karim never actually had a formal role at YouTube, according to the New York Times, before it was sold to Google in October 2006 for $1.65 billion.

After the platform was bought out, Karim perused a master’s degree in computer science at Stanford University.

Despite this, he has one of the most famous faces in YouTube history, thanks to his appearance in the first ever video uploaded to the platform.

The video shows Karim standing in front of an elephant exhibit at the San Diego Zoo telling the camera that the animals have ‘really long trunks’.

Thankfully, more exciting videos have since been uploaded to YouTube in the platform’s 16-year-history.

‘Watching Matt Koval’s announcement about the removal of dislikes, I thought something was off.

The spoken words did not match the eyes. The video reminded me of an interview Admiral Jeremiah Denton gave in 1966. I have never seen a less enthusiastic, more reluctant announcement of something that is supposed to be great.

Calling the removal of dislikes a good thing for creators cannot be done without conflict by someone holding the title of “YouTube’s Creator Liaison”. We know this because there exists not a single YouTube Creator who thinks removing dislikes is a good idea – for YouTube or for Creators.

Why would YouTube make this universally disliked change? There is a reason, but it’s not a good one, and not one that will be publicly disclosed. Instead, there will be references to various studies. Studies that apparently contradict the common sense of every YouTuber.

The ability to easily and quickly identify bad content is an essential feature of a user-generated content platform. Why? Because not all user-generated content is good. It can’t be. In fact, most of it is not good. And that’s OK. The idea was never that all content is good. The idea WAS, however, that among the flood of content, there are great creations waiting to be exposed. And for that to happen, the stuff that’s not great has to fall by the side as quickly as possible.

The process works, and there’s a name for it: the wisdom of the crowds. The process breaks when the platform interferes with it. Then, the platform invariably declines. Does YouTube want to become a place where everything is mediocre? Because nothing can be great if nothing is bad.

In business, there’s only one thing more important than “Make it better”. And that’s “Don’t f**k it up”.’