A young Australian woman has taken to social media to express her shock at receiving a $500 fine for disobeying a much-misunderstood road rule.

Melbourne’s Lucinda McGarrity copped the fine for driving through a yellow light on Rathdowne Street, in Carlton North.

She candidly admitted she didn’t know her action was against the law.

‘So you learn something new every day and today I learned that it is illegal to drive through an amber light unless it is 100 per cent necessary to do so,’ she said in a TikTok video.

To add to Ms McGarrity’s embarrassment, cops pulled her over with a blaring sirens at 8.30am on a busy road, then tested her for drink and drug driving.

In the ultimate indignity for a Melburnian, it all happened right outside one of North Melbourne’s trendiest eateries, Florian.

‘So that was embarrassing,’ she said.

‘Everyone’s eating their salmon gravlax and tomato tartine while getting the show of their life, which is me getting drug tested and breath tested while bawling my eyes out.

Some of Ms McGarrity’s followers were impressed at how she accepted the punishment.

But one urged her ‘fight the fine… try to get out of it’. 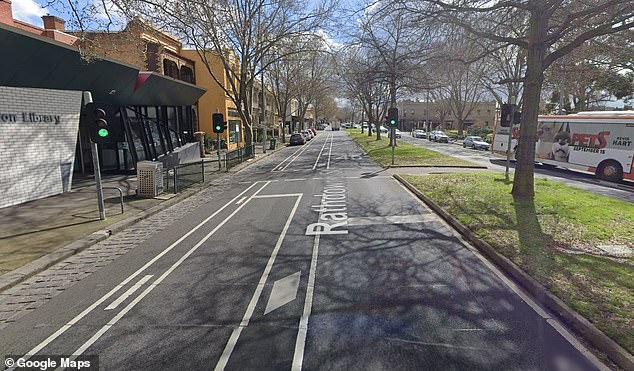 Melbourne’s Lucinda McGarrity copped the fine for driving through a yellow light on Rathdowne Street, in Carlton North

She responded: ‘I won’t fight it, I did the wrong thing. Good to know for the future though.’

Others were surprised it is an offence at all, and one that attracts a $500 fine.

‘How do they justify such a high fine for such a small offence?’ one woman said.

‘It gets treated the same as a red light,’ said Ms McGarrity.

Others were not so empathetic towards her.

‘The comments [here] are scaring me, how does no one know this? That’s the whole purpose of the amber light (to slow down),’ a woman said.

According to the RACV, many drivers mistakenly think of the amber (or yellow) ‘as an extension of the green’.

‘A better way to think of the yellow is that it is at the start of the red, not at the end of the green.

‘A yellow light is not a signal to travel faster through the intersection to beat the red light.’

The RACV said drivers ‘must not’ go through a yellow if it is possible to safely brake before crossing the line.

‘If you can’t safely stop before the stop line, you must stop before entering the intersection itself.’

It added that motorists should still stop even if they go slightly over the stop line.

‘At this point, our recommendation would be that you stop.’

If you’ve already entered the intersection when the light goes yellow or red, you must get out as soon as you can safely.