Australian tradies as young as 25 are falling desperately ill with lung diseases, many from working with a popular stone used in swanky kitchen renovations.

People developing asbestos-related conditions such as mesothelioma from working in trades, or even from doing their own renovations, in later life is a tragic but not new trend.

Now incurable lung diseases are also being diagnosed in much younger people, sometimes as quickly as five years after starting a career in trades such as stonemasonry, bricklaying and demolition.

Daily Mail Australia spoke with two men who should be in the prime of their lives, but each face a frightening future after falling ill because of exposure to silica dust while doing construction jobs.

Both Hak Kim, 27, and Joshua Suwa, 34, are certain to see their lives cut short because of breathing in the dust at work.

Australian tradies in their 20s and 30s are falling desperately ill with lung diseases, many from working with a popular stone used in swanky kitchen renovations (Pictured, silicosis sufferer Joshua Suwa, 34, with his wife Erin and children Hudson and Lenny) 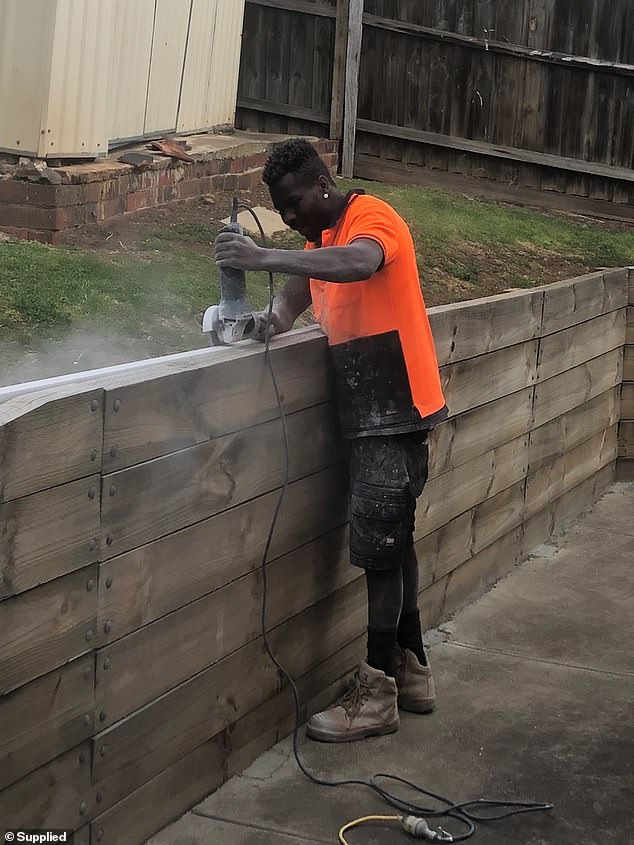 Joshua Suwa can no longer work as a stonemason due to his silicosis diagnosis. (Pictured, Mr Suwa uses a timber fence to stabilize an engineered stone shelf he is cutting, without wearing a mask) 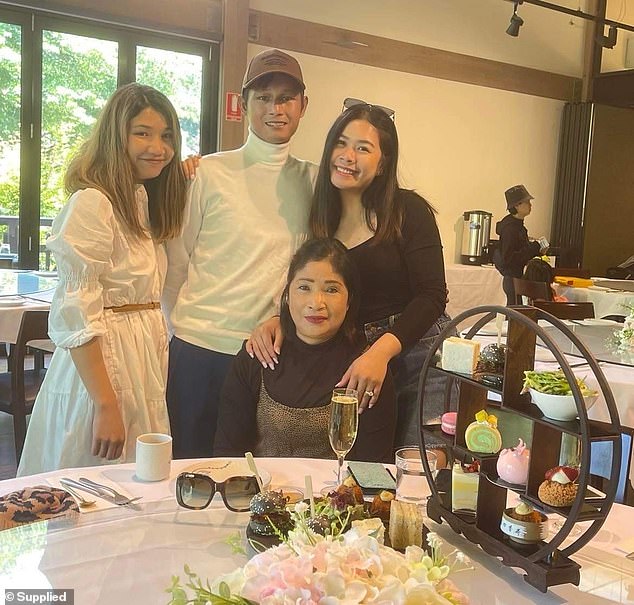 Hak Kim (pictured centre, in baseball cap) is fighting for his life and on the waiting list for a lung transplant, after inhaling dust every day while working on Melbourne demolition sites between the ages of 20 and 24.

Mr Kim is fighting for his life and on the waiting list for a lung transplant, after inhaling dust every day while working on Melbourne demolition sites between the ages of 20 and 24.

‘I cried when they told me I’d need a transplant,’ Mr Kim said, especially as the operation is a last resort, and even after surgery the patient has a high risk of infection and organ rejection.

Mr Kim loved playing soccer and went fishing every weekend, but now he cannot walk far, or grip a fishing rod. He needs oxygen to deal with constant breathing difficulties. 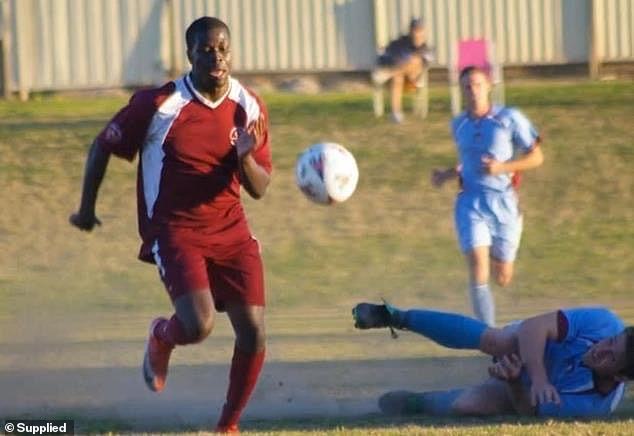 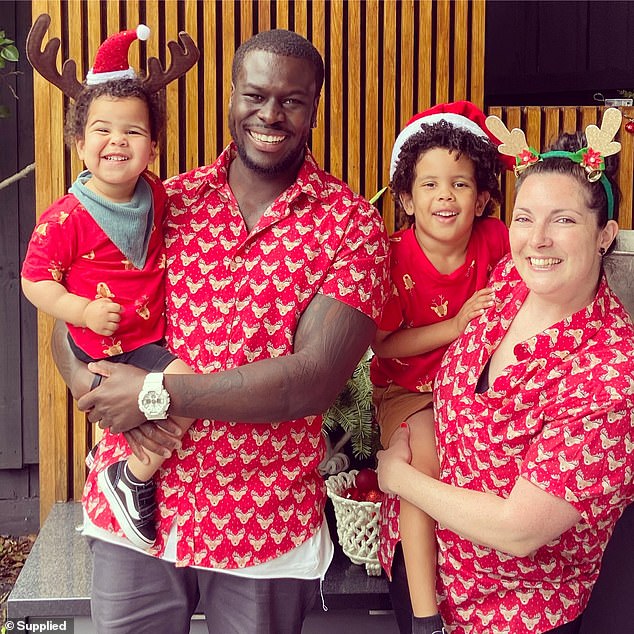 Mr Suwa is desperate to stick around as long as possible to see the two boys he and partner Erin have – Hudson, 5, and Lenny, 2 – grow up (Pictured, Mr Suwa and his partner Erin and their boys) 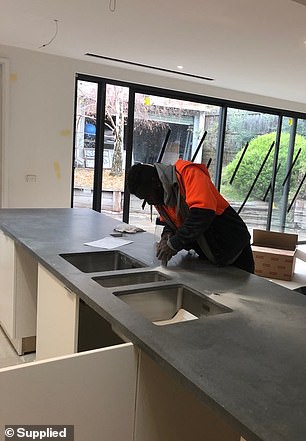 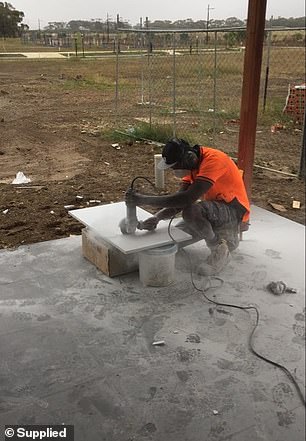 Mr Suwa (pictured) developed silicosis and scleroderma after working as a stonemason for nine years, five of them in Sydney and four in Melbourne

‘I used to be an athlete and play a lot of sports like soccer and badminton. I was very healthy, I never even drank or smoked.

‘Now I feel tired all the time, sometimes like I’m about to die, it’s frightening.

‘Most of the time now me and my missus just drive around, and maybe go to visit my nephews.’

The $1.6million he’s received in compensation, because he was never given breathing protection, means little.

‘I didn’t want it. I could have made more anyway.’ 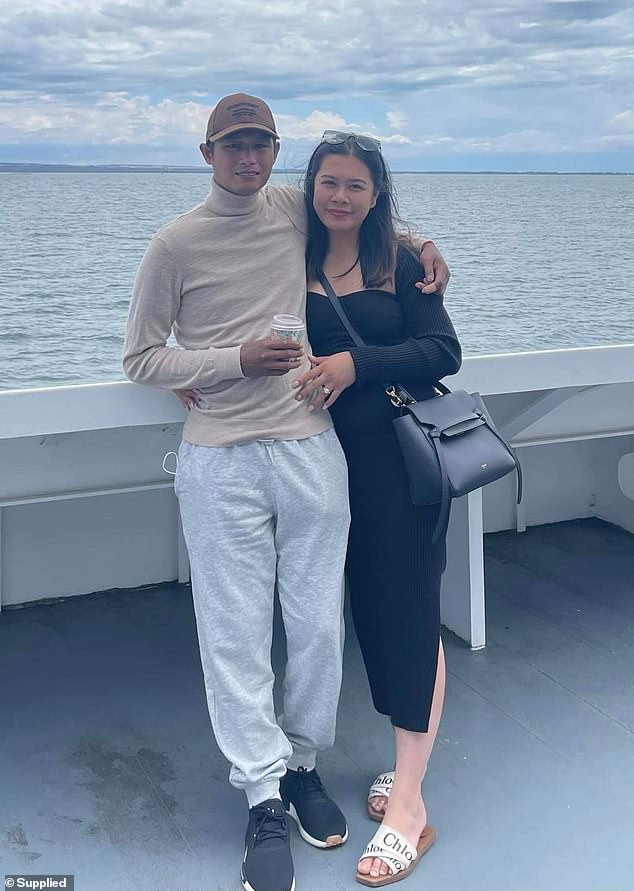 The $1.6million Mr Kim received in compensation, because he was never given breathing protection, means little 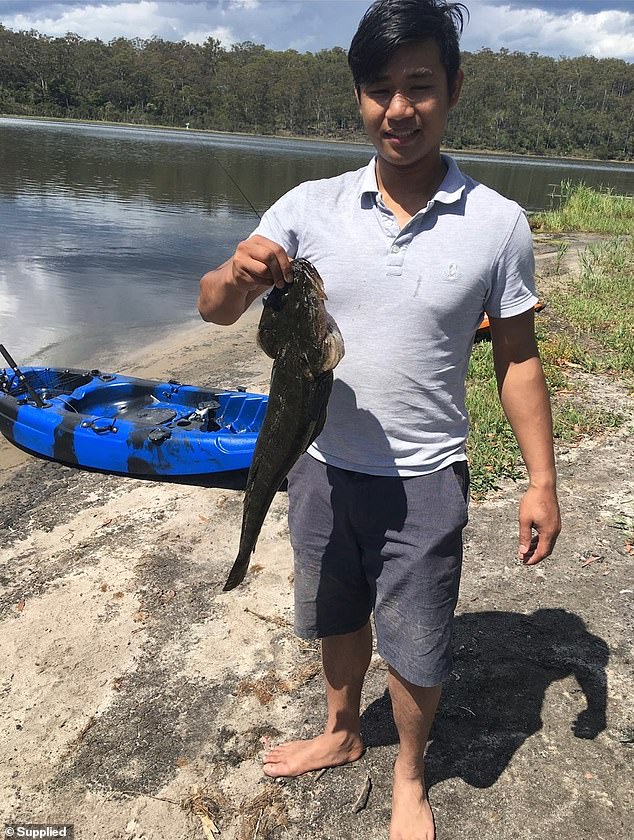 Meanwhile, Mr Suwa developed silicosis and scleroderma after working as a stonemason for nine years, five of them in Sydney and four in Melbourne.

He is desperate to stick around to see the two boys he and partner Erin have – Hudson, 5, and Lenny, 2 – grow up.

But he is worried his silicosis will worsen as that is what happens with most lung diseases over time.

‘It’s tough, I don’t know how I’m going to progress with it. I’m an extremely positive person so I’ll keep believing and hoping and praying.

‘I have to be around as long as possible for my two kids.’

Mr Suwa played soccer to a high level in western Sydney and developed the disease after working as a stonemason producing and cutting engineered stone for kitchen renovations between 2015 and 2019.

‘Breathing is difficult, even as I’m talking now, I have to be sitting down. I cant walk and talk at the same time. 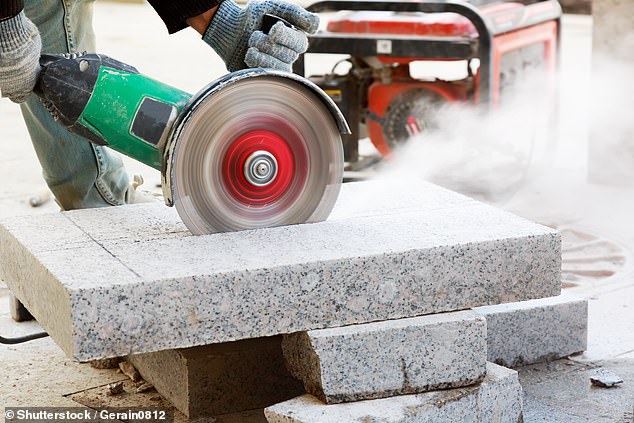 Silica dust from engineered stone has been identified as a major culprit in lung disease diagnoses, especially silicosis 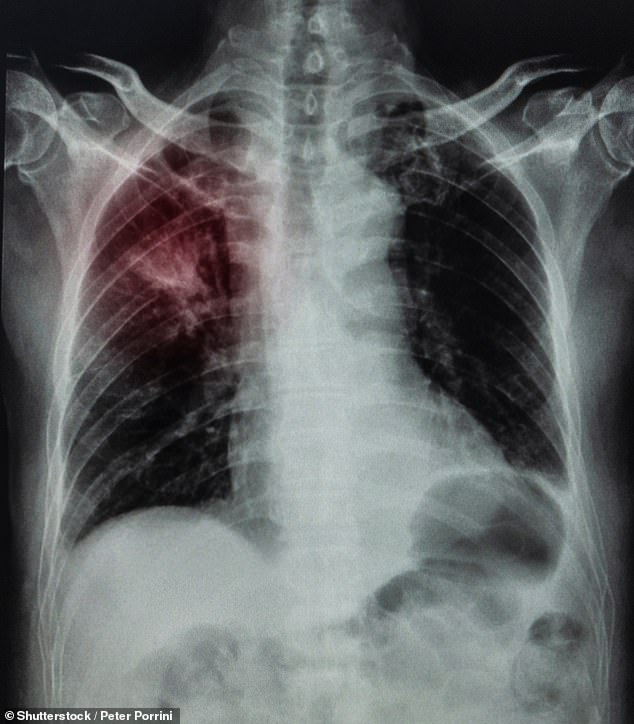 Silicosis is caused when materials such as artificial stone bench tops are dry cut and workers inhale tiny particles of silica dust. Pictured: A chest x-ray image demonstrating the impact silicosis has on the lungs in red)

The risks of exposure to silica dust on Australian building sites

Silica dust is seen as so insidiously dangerous today that some safety requirements say that masks won’t  protect the wearer if they have a beard.

In order to work, the mask needs to seal tightly. That’s how fine silica dust grains are –  100 times smaller than sand.

Once they get into the lungs, they block pores, leading to a disease called silicosis.

The Cancer Council told Daily Mail Australia that 600,000 Australians are exposed to silica dust in the workplace every year.

New computer modelling done by Curtin University reveals 10,000 people are predicted to develop lung cancer in their lifetime from being exposed to silica dust and that 103,000 will develop silicosis.

Perhaps the major requirement on sites today when cutting stone and brick is that a wet saw must be used.

But like all safety requirements, they only work if rigidly applied.

Some sites, some foremen and even some workers still don’t take them seriously enough.

‘I have real bad joint pains and hands get real sore when it’s cold, I get constant headaches too.

Engineered stone is a type of man-made or composite stone made from quartz and resin that is a cheaper alternative to granite and marble.

It is commonly used in new kitchen renovations in Australia and was included in a federal task force report last year which said says health and safety regulations aren’t properly protecting workers from dust exposure.

Its final report stopped short of recommending an immediate ban on imports.

But the task force said Australia should get ready to ban some or all product imports from July 2024 in the absence of significant industry changes.

One change that occurred in recent years is that it is now compulsory to cut stone with a wet masonry saw to minimise the dust created.

But it’s sometimes not done, usually because of the belief that following all safety procedures slows down a site, or because equipment isn’t properly maintained.

Mr Suwa was given a paper mask to wear on sites but his boss didn’t want employees to use more than one mask a week – no matter how caked in dust they got.

‘In the factory I’d cut the stone probably once a day, but when I started installing it I’d be cutting it at least two or three times a day,’ he said.

‘I watch shows with Erin and I’ll say ‘he’s not wearing a mask and he’s cutting tiles’, I’ve even seen it on big TV shows like The Block.

‘They shouldn’t be cutting tiles without a mask, even outside.’

While the safety measures were strict for handling asbestos, they were almost non-existent for the demolition work.

‘We were only given gloves and safety glasses, we had no mask at all.’ 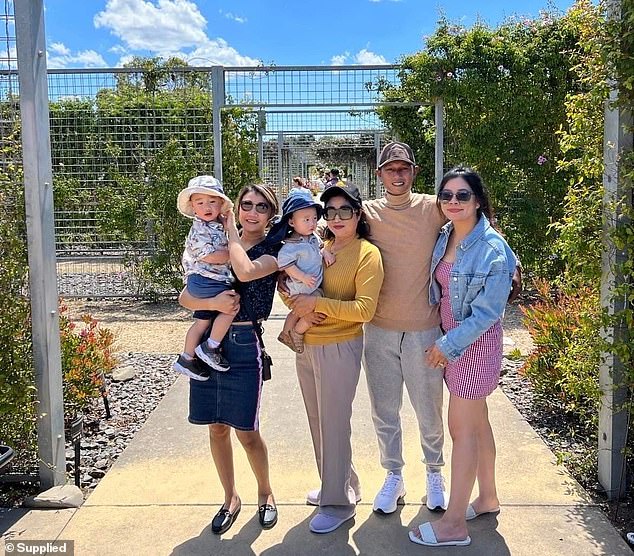 Mr Kim (pictured second from right) was highly active before he developed a lung condition while working in demolition. Now he needs a lung transplant 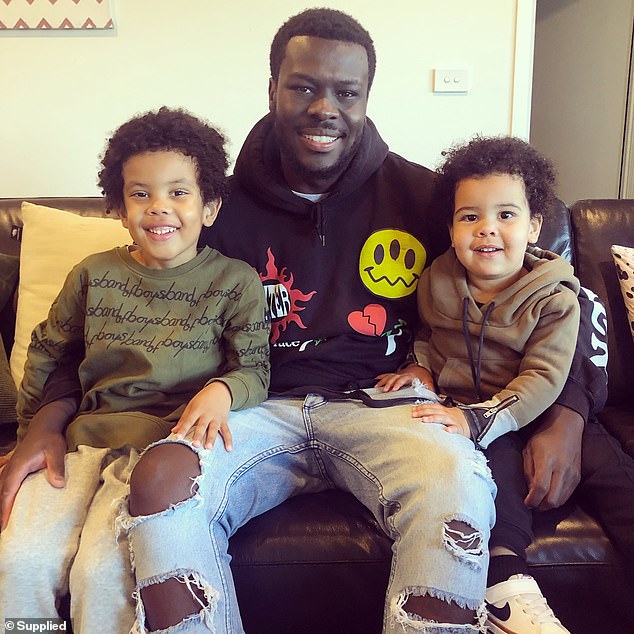 Mr Suwa is worried about his lung disease, silicosis, will worsen as that is what happens with most lung diseases over time

Mr Suwa said he felt angry for a year after his diagnosis, but eventually that gave way.

‘I had to let it go. I’ve always been happy-go-lucky guy and it knocked me down a bit. I try to find positive but I struggled to find a positive here.

‘I guess it’s that I get to spend a lot of time with my kids now.’

He was offered a job in the office of the company he used to work for but felt a strong opposition to it.

‘They asked me to go back to the office and measure, I said ‘no thanks’.

‘I don’t want to help with a product that I don’t believe is any good.’

Instead he’s about to start a nine-month course training as a barber and would love to run his own small barber shop.

Part of the appeal is getting to talk to tradies who might come in so he can warn them about the dangers of ignoring safety.

‘You never know who might walk in and sit down in that chair,’ he said.

Anger wasn’t the emotion Mr Kim, who also hopes to one day be a father, felt.

‘I just feel sad about it really,’ he said.

‘A young person like me, a young person with no idea what’s going on and one day I got sick and then my life is broken.’

He is supported by his partner, Sreyneang, who has to help him to dress and shower.

While around half of lung transplant recipients don’t survive for more than five years, age is a major factor in his favour.

He and Sreyneang hope to have and raise their own family and are undergoing IVF treatment. 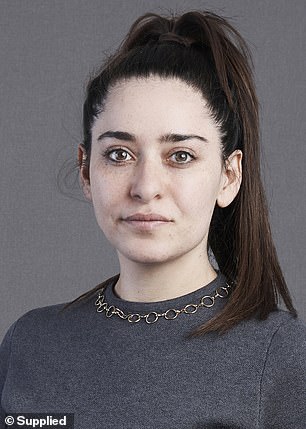 Anita Arian from Maurice Blackburn lawyers, who deals with claims for those who have suffered workplace injuries, has noticed an influx of younger workers being diagnosed with lung diseases after working with silica dust.

‘There’s an influx of people in their 20s and 30s in the last couple of years in occupations related to stonemasonry, but also construction, demolition and in quarries with these illnesses,’ said Anita Arian, a lawyer with Maurice Blackburn.

‘They are debilitating and can lead to lung transplant or death. I think its shocking, definitely.’

Silica dust from engineered stone has been identified as a major culprit in the diagnoses, especially silicosis.

Ms Arian said silicosis has a much shorter latency period than mesothelioma, ‘between five and 15 years’.

Last year a government report recommended engineered stone, a major source of silica dust, could be banned from 2024.

‘Far more could have been done in terms of safety, I think more rigid safety measure should be in place, I can’t stress enough there’s no cure for these illnesses; prevention is the key,’ said Ms Arian.