Xfinity 500 racecar driver pulls inspiration from NASCAR 2005 video game to travel around the outside wall at 130mph – moving from 10th to 5th place, and earning himself in a spot in the championship

A race car driver in peril of being eliminated from Sunday’s Xfinity 500 race attempted a bizarre maneuver he learned in a racing videogame that blasted him from 10th up to 5th place, and earning a spot in the championship race this weekend.

Ross Chastain, 29, pulled a Hail Mary pass when he recalled the ‘wall ride’ move he from NASCAR 2005 on Nintendo GameCube.

The Chevrolet driver grabbed fifth gear and blasted off at 130 miles per hour, riding along the outer wall and passing the five cars ahead of him, specifically driver Denny Hamlin who was holding on to fifth place.

Chastain told reporters in a post-race interview that he was not sure the move would work, but his brother had used the sneak attack to beat him when they played the game together as children and he took a chance that paid off.

In an attempt to avoid being eliminated from moving on to the championship race, a driver used a move from the NASCAR 2005 videogame

The Xfinity 500 race kicked off at Martinsville Speedway in Ridgeway, Virginia – a half-mile track built in 1947.

Sunday’s race marked the 75th anniversary of the season, which drew in a massive crowd to the stands.

With all eyes watching, Chastain was not about to miss an opportunity to carry on to the Championship race set for November 6.

He was in 10th place on the last lap and figured the move was worth trying – since he was already in a losing spot.

Chastain kept the racecar in fifth gear, which provides the least pulling power to allow the greatest range of speed, and drove as close as possible to the wall. 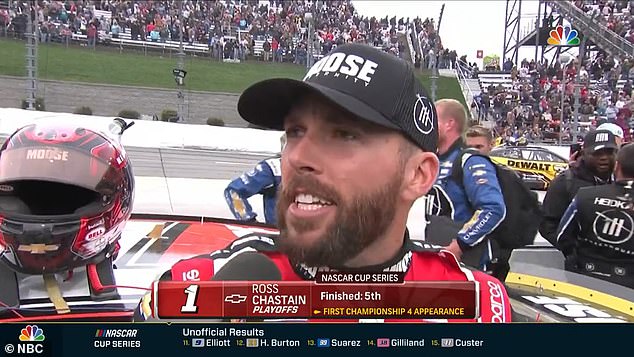 Ross Chastain, 29, pulled a Hail Mary pass when he recalled the ‘wall ride’ move he from NASCAR 2005 on Nintendo GameCube 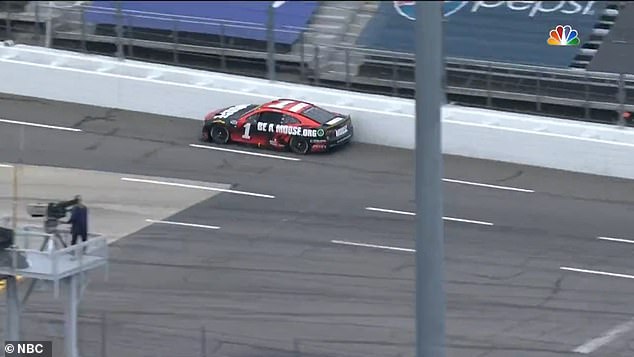 The Chevrolet driver grabbed fifth gear and blasted off at 130 miles per hour, riding along the outer wall 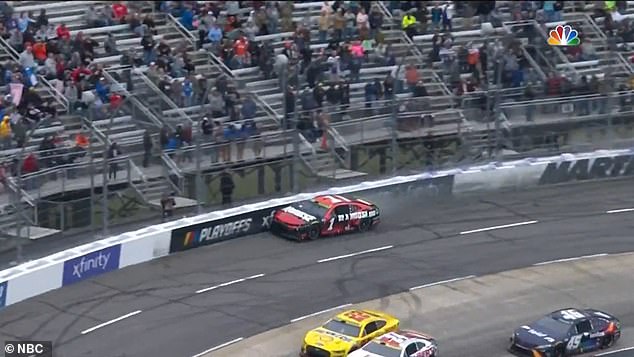 He blasted past cars ahead of him. Passing them one by one

Hugging the outer wall, Chastain let go of the wheel and trusted the wall would hold steady the car around the track – and to his and everyone’s surprise, it did just that.

In a post-race interview with NBC Sports, Chastain said, ‘I played a lot of NASCAR 2005 on the GameCube with Chad [Chastain’s brother] growing up, and you can get away with it, and I never knew if it would actually work. I did that when I was 8 years old.’

Chastain and Hamlin have been feuding prior to Sunday’s race. It began on June 5 when Chastain ran into the back bumper of Hamlin.

Hamlin spun out of control and his car sustained some damage.

However, 15 laps later Hamlin took revenge by slowing down in front of his opponent.

NASCAR intervened and told Hamlin that, ‘[Hamlin] had made his point.’ 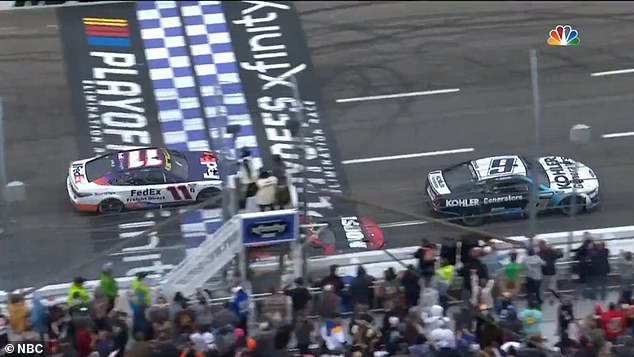 Chastain went from 10th place up to 5th place in what seemed like less than a second. This image shows his red car traveling over the finish line

But it seems Chastain got the last word in by surpassing his nemesis at the Virginia race.

However, it was not without consequence.

His vehicle was damaged from scrapping the wall, but there was also  the chance of a deadly crash if he had hit an obstacle on the structure.

‘Once I got against the wall, I basically let go of the wheel and just hoped I didn’t catch the turn four access gate or something crazy,’ Chastain said. ‘But I was willing to do it.’

Chastin will not race at Phoenix Raceway for the Championship 4 where he will face three other races and although he is not the favor to win, he will go down history for the video game move in the Xifinity 500 race.