Gamers will be able to get their hands on the next-generation Xbox consoles from November 10, Microsoft has confirmed.

The flagship Xbox Series X is priced at £449, while the compact version, the Xbox Series S, will retail at £249.

Pre-orders for both consoles, which are both part of Microsoft’s ultra-powerful fourth-generation range, will begin on September 22.

The devices will also be made available through its Xbox All Access programme, allowing players to split the cost across 24 months from £20.99 a month.

A new partnership with video game-maker Electronic Arts will also bring more than 60 of the firm’s ‘biggest and best console and PC games’ to Xbox Game Pass, streaming service known as ‘the Netflix of games’, at no additional cost.

Microsoft rushed to officially reveal the first images of the Series S yesterday, after it leaked on several US websites.

Both the Xbox Series X (left) and Series S (right) will be available on November 10. The release date was already rumoured but unconfirmed until now. Pre-orders for both begin September 22

‘Gaming has evolved in the last decade to make it easier, simpler and more affordable for any player to make that first connection with a new world, a new story, or a new friend,’ Phil Spencer, head of Xbox, said in a blog post on Wednesday.

‘On November 10, a new generation of console gaming begins.

‘That’s when our vision becomes reality with the most performant, immersive and compatible next-generation console gaming experiences, and the freedom to play your games with your friends, anytime, anywhere.

‘With a family of next-gen Xbox consoles, even greater variety and value with Xbox Game Pass, and an expansion to Xbox All Access, we invite everyone to join us for this next generation of gaming.’

Microsoft has said the Series X is the most powerful console it has ever made – featuring processing power twice that of the current generation Xbox One X.

Series S is cheaper, smaller and less powerful than its bigger sibling, the Series X.

Both consoles are have very distinctive designs – the Series X, which the public first got a glimpse of back in December, looks like a black tower block with an air vent at the top and the Xbox logo in the corner.

The Series S, which is 60 per cent smaller than the Series X, looks a bit like a hi-fi or an intercom with its circular black vent on a white body.

Unlike the Series X, Series S will not feature a disk drive, with users instead downloading content for the system digitally.

As previously announced, the fourth generation Xbox consoles have backwards compatibility, which allows them to play games from older consoles.

The ability to play all the old favourites across four generations of Xbox ‘was a key tenet’ in the next generation of console gaming, Microsoft previously said.

Backwards compatibility means gamers will have access to thousands of titles across four generations of content – from the original Xbox, released in 2001, to 2005’s Xbox 360 and 2013’s Xbox One. 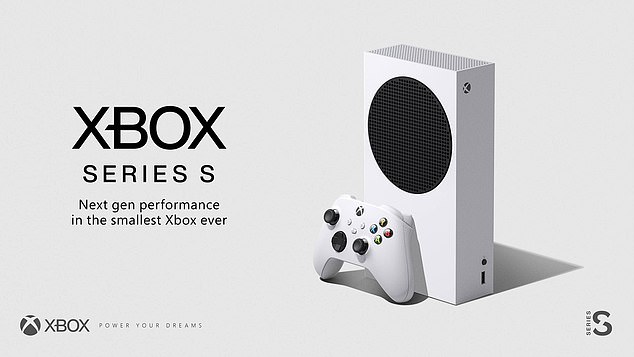 Microsoft’s official image of the new Series S, which will enter the market along with Microsoft’s main event and next-gen Xbox console, the Series X 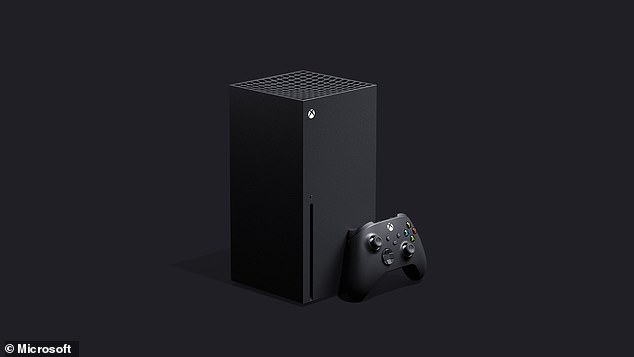 The Xbox Series X console, to be released this November. The design of the new console is different from previous Xbox generations, with a more upright ‘tower block’ appearance

Xbox has also given more details on its All Access option, which provides an Xbox Series X, or Series S, along with 24 months of the full Xbox Game Pass Ultimate.

All Access lets gamers spread the cost of an Xbox console and access to games over the course of two years.

They will also receive an EA Play membership, letting them play more than 60 of EA-made console and PC games, like FIFA 20, Titanfall 2 and Need for Speed Heat.

There are 50 new games already planned to coincide with the consoles’ launch, including Assassin’s Creed Valhalla, Gears Tactics, and Watch Dogs: Legion.

However, the release of the new console’s flagship game, Halo Infinite, is being delayed until 2021, giving Microsoft more time ‘to finish critical work’.

Microsoft previously said its vision is ‘to deliver the most ambitious Halo game ever’ while ‘balancing the team’s well-being’.

‘To do that, we will need some more time to finish the critical work necessary to launch Halo Infinite, which will come in 2021,’ it said in August.

Microsoft revealed a glimpse of Halo Infinite game play footage in July, although the gameplay was criticised for its overall ‘art style and visual fidelity’, the developers admitted, and the extra time will allow for much-needed tweaks.

The US gaming giant has already partnered Samsung for the release of its new Galaxy Note 20 range, which has built-in support for game streaming via Xbox Game Pass.

Like the video games version of Netflix, Xbox Game Pass delivers a library of content across console and PC, including all games from Xbox Game Studios the day they launch.

The Xbox Series X release will coincide with the arrival of Sony’s new console, the PlayStation 5, which is expected to launch in the last three months of the year.