Wyoming has introduced state legislation to ban the sale of new electric vehicles by 2035 to ‘ensure the stability’ of its oil and gas industry.

The announcement comes as several states, including New York, California and Oregon, move to phase out the sale of new gas-powered vehicles to combat climate change.

Wyoming officials argue that the oil and gas production has created ‘countless jobs’ and contributed ‘revenues to the state of Wyoming throughout its history.’

The bill also notes that Wyoming lacks charging stations and that ‘the critical minerals used in electric batteries are not easily recyclable or disposable.’

The proposed legislation, introduced Friday, comes from a group of lawmakers led by Senator Jim Anderson.

In 2021, Wyoming placed as the eighth top oil producer in the US, producing 85.43 million barrels.

Today, approximately 100 companies are operating 30,000 miles of pipelines in Wyoming, not including all gathering systems or all inactive or abandoned pipelines.

And there are more than 68,000 jobs in the state’s oil and gas industry.

The bill praises gas-powered vehicles as enabling the state’s industries and businesses to ship goods and resources across the US.

On the other hand, the shift to electric vehicles would ‘have deleterious impacts on Wyoming’s communities and will be detrimental to Wyoming’s economy and the ability for the country to efficiently engage in commerce.’

The bill encourages Wyoming residents to limit the sale and purchase of new EVs and aim to phase them out entirely by 2035.

‘One might even say tongue-in-cheek, but obviously it’s a very serious issue that deserves some public discussion,’ Boner told the Cowboy State Daily.

‘I’m interested in making sure that the solutions that some folks want to the so-called climate crisis are actually practical  in real life.

‘I just don’t appreciate when other states try to force technology that isn’t ready.’

California first announced the ban on gas-powered cars in 2020, but the legislation went into effect in August 2022. 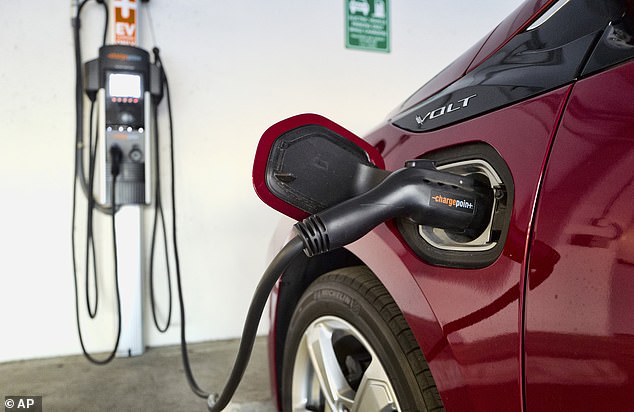 The announcement comes as several states, including New York, California and Oregon, move to phase out the sale of new gas-powered vehicles to combat climate change

The state requires that 35 percent of new passenger vehicles sold by 2026 produce zero emissions, then 68 percent by 2030 and 100 percent five years after.

New York was the second state to announce the same ban in October 2022, and Massachusetts, Oregon and Washington recently followed.

However, nearly a dozen more could join the ranks in the coming months.

The other states that follow the emission standards but have not yet committed to the ban are Connecticut, Delaware, Maine, Maryland, New Jersey, New Mexico, District of Columbia and Rhode Island.