Wynonna Judd is looking back at the last time she sang on a stage with her mother Naomi Judd; Naomi shocked the world when she died by suicide at age 76 on April 30, 2022 in Tennessee.

Wynonna shared on the Today show’s podcast Making Space With Hoda Kotb that she could see warning signs that her mom was not doing that well when they sang together in April 2022 at the CMT Awards in Nashville.

‘She was very fragile,’ the 58-year-old crooner said of her mother’s demeanor that night, adding that she was a little ‘off’ when she wore that unusual wig on stage. Wynonna also shared that her mother was late, which was very unlike her.

Last song: Wynonna Judd is looking back at the last time she sang on a stage with her mother Naomi Judd in April 2022 (pictured). She told Hda Kotb during a podcast that her mom was ‘nervous’ 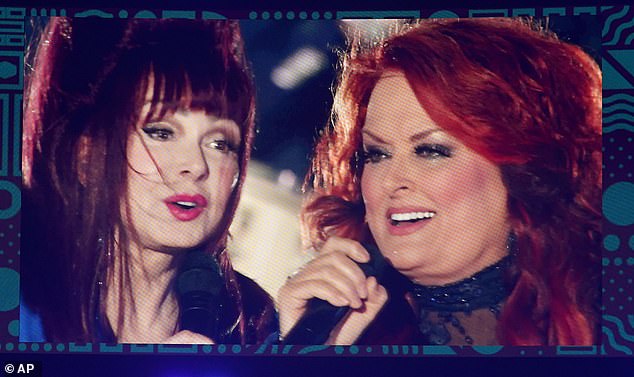 She was not herself: ‘She was very fragile,’ the 58-year-old crooner said of her mother’s demeanor that night, adding that she was a little ‘off’

The famous mother/daughter team belted out their 1990 single Love Can Build A Bridge at the CMT Awards.

But as they harmonized, Wynonna saw worry in her mother’s eyes. ‘I think it’s because she hadn’t sung in a long time,’ she explained.

‘And I think when our parents get older, their world gets smaller. And she was late (that night), and she is never late. I think she was nervous.

‘And I think it was so much of an expectation to do it for CMT Awards, and I just think it was, like, imagine being that nervous and having to go out.’ 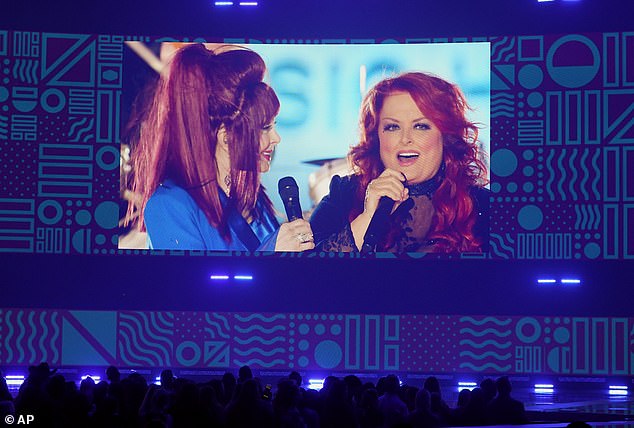 It was too much: But as they harmonized, Wynonna saw worry in her mother’s eyes. ‘I think it’s because she hadn’t sung in a long time,’ she explained

Wynonna was also taken aback by her mother’s colorful wig. ‘The first thought in my head was, no, I don’t want to hug her or comfort her. I want to pull her wig off,’ she recalled.

‘Because that was the dynamics of our relationship. It was tough and tender.’

The relationship between Wynonna and Naomi was complicated. They were both ‘alpha and determined’ and they struggled to be warm toward each other. 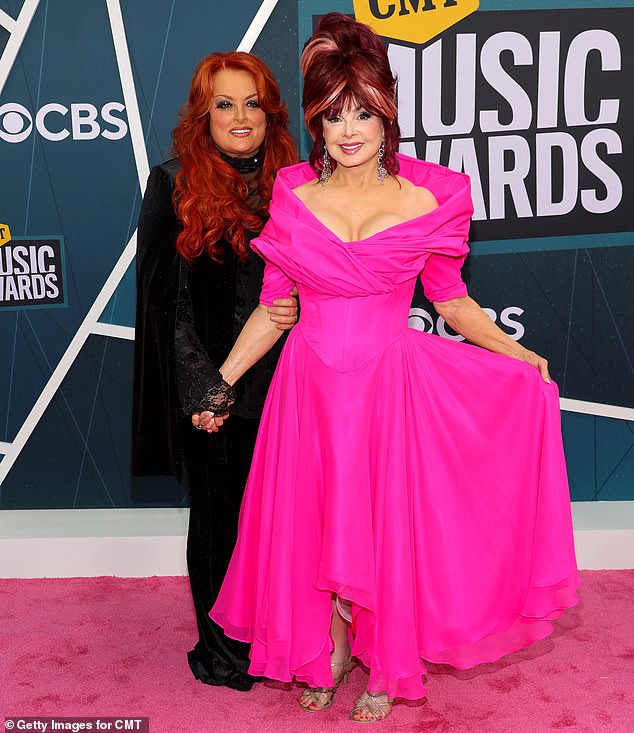 Odd, overall: Wynonna also said that when her mother showed up in that wig, she didn’t like it and wanted to pull it off; seen on the carpet on April 11 at the CMT Awards

‘It was sometimes hard for me to be tender with mom, because I’m the lead singer, and I’m on my own version of life, on my own journey,’ Judd shared.

‘And I think it occurred to me, though. All of a sudden, she looked at me and blinked, and I knew then that something wasn’t right in terms of her being off a little bit, like, nervous. I softened, which I think is God’s grace. I just kind of reached out and touched her hand, like, “I’m here. I got you. It’s OK.”‘

She added, ‘I’m glad I did that, because that was the last time we performed together. I’m glad I didn’t stay stuck in my perfectionism is my point, I guess.’ 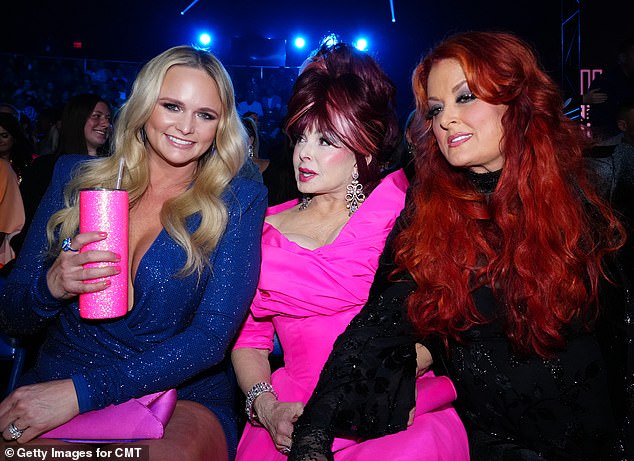 The night was just different: Here Wynonna, far right, held her mom’s hand as they spoke to Miranda Lambert, far left, at the Nashville Municipal Auditorium in Nashville, Tennessee

The last thing Wynonna told her mother before she died was ‘I love you.’

And she has not stopped talking to her, even in death, added Wynonna.

‘I had a lot of conversations with her. I’m constantly talking to her about, “Well, what the hell am I supposed to do about wardrobe?” Because she was always the wardrobe (person).’

And the conversations get heavy at times. 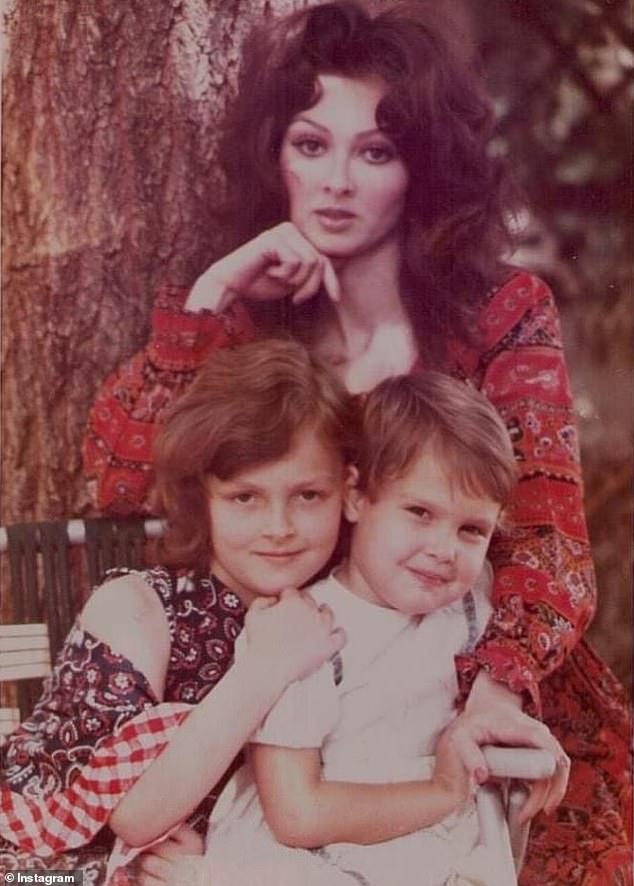 The early days of showbiz: Naomi with her daughters Wynonna , left, and Ashley, right, in the early 1970s 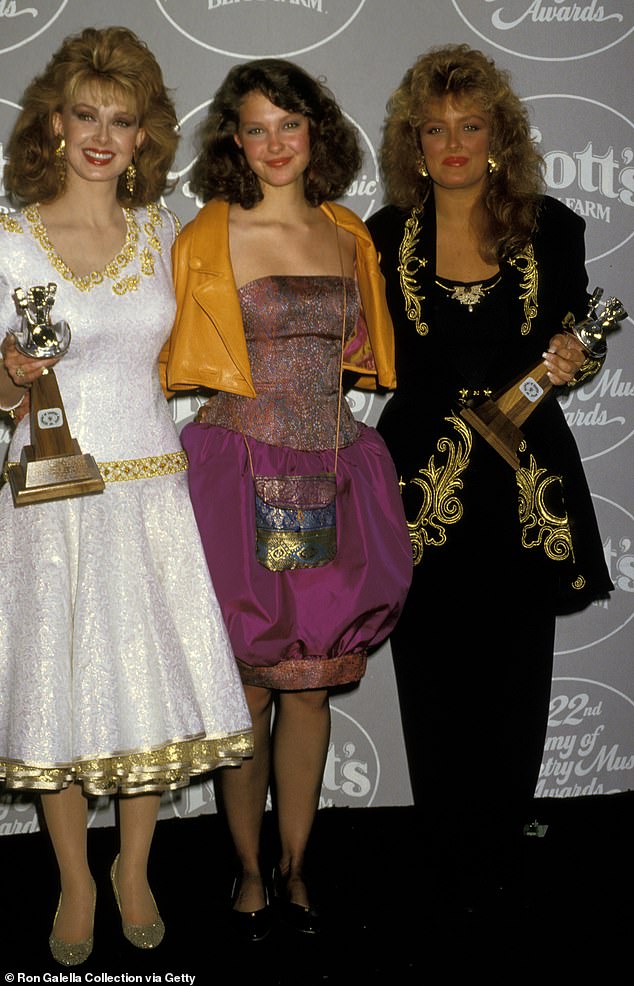 Awards time: Naomi, Ashley and Wynonna at the 22nd annual Academy Of Country Music Awards in 1987

Then Wynonna touched on her mother’s kindness.

‘My mother was very kind,’ the ‘singer said. ‘(She) always made people feel, whether it was a limo driver or the maid in the hallway, she always spoke to everyone. She will be remembered for that, the kindness. And the ones that didn’t know her, I would say give her a break, because they’re going to judge her based on what they know about the suicide.’

And she wants her mother to be reminded as a ‘great songwriter.’

The singer added, ‘She is still my queen.’

If you or someone you know is in crisis, call 988 to reach the Suicide and Crisis Lifeline. You can also call the network, previously known as the National Suicide Prevention Lifeline, at 800-273-8255, text HOME to 741741 or visit SpeakingOfSuicide.com/resources for additional resources.