The wreck of HMS Gloucester, a royal warship that sank 340 years ago while carrying the future king James Stuart, has finally been found off the coast of Norfolk.

The ‘outstanding’ ship, which sank on May 6, 1682 after hitting the Norfolk sandbanks in the southern North Sea, was uncovered 28 miles off the coast of Great Yarmouth half-buried on the seabed.

Plans are underway to exhibit artefacts on board the ship that have been brought to land, including clothes, wine bottles and the ship’s bell, used to conclusively confirm the wreck was the Gloucester.

The exhibition – jointly curated by the University of East Anglia and Norfolk Museums Service – will be staged for five months at Norwich Castle Museum & Art Gallery from spring next year.

The ship itself is fragmented and still on the seafloor, and authorities say there are currently no plans to bring any part of the remains to land.

HMS Gloucester represents an ‘almost’ moment in British political history, as it nearly caused the death of the Catholic heir to the Protestant throne at a time of great political and religious tension.

James Stuart, later James II of England, survived the sinking but up to around 250 sailors and passengers lost their lives, largely due to his actions.

James barely survived, having delayed abandoning ship until the last minute, needlessly costing the lives of many who, because of protocol, could not abandon the ship before royalty.

The wreck of a royal warship which sank in 1682 while carrying the future King of England James Stuart has been discovered off the coast of Norfolk. Photo issued by Norfolk Historic Shipwrecks shows divers Julian and Lincoln Barnwell measuring a canon that was found with the wreck 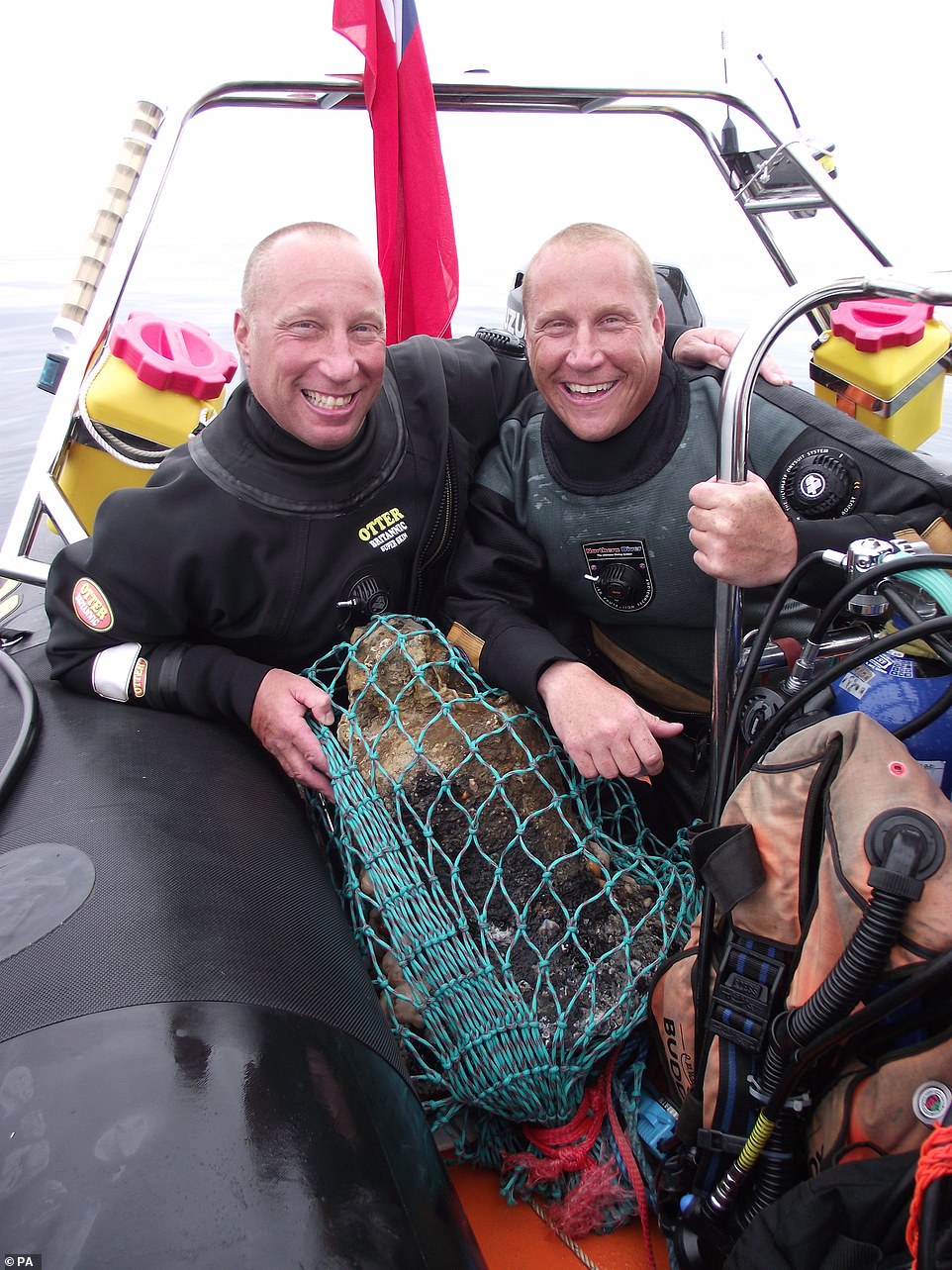 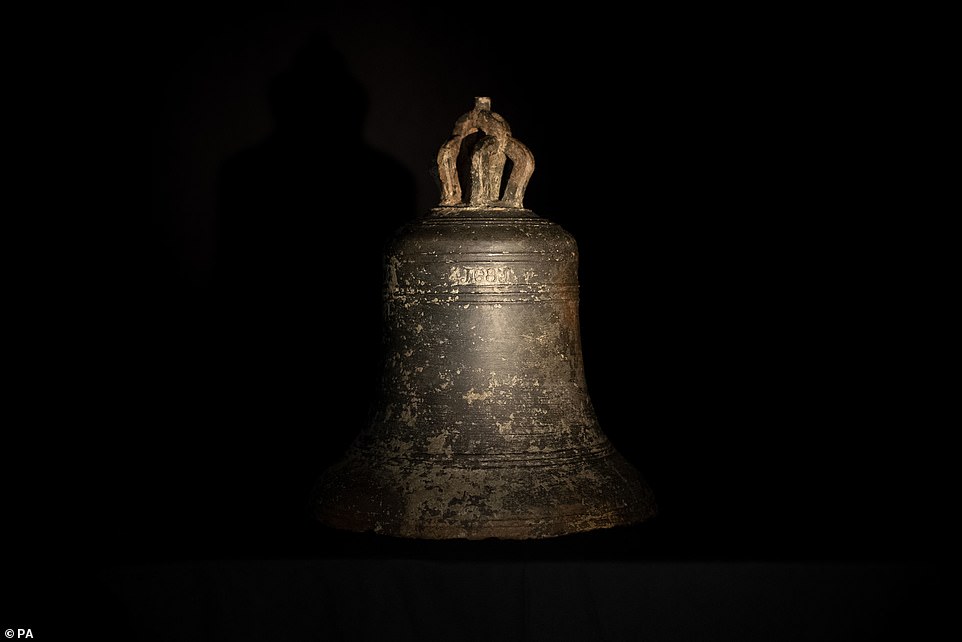 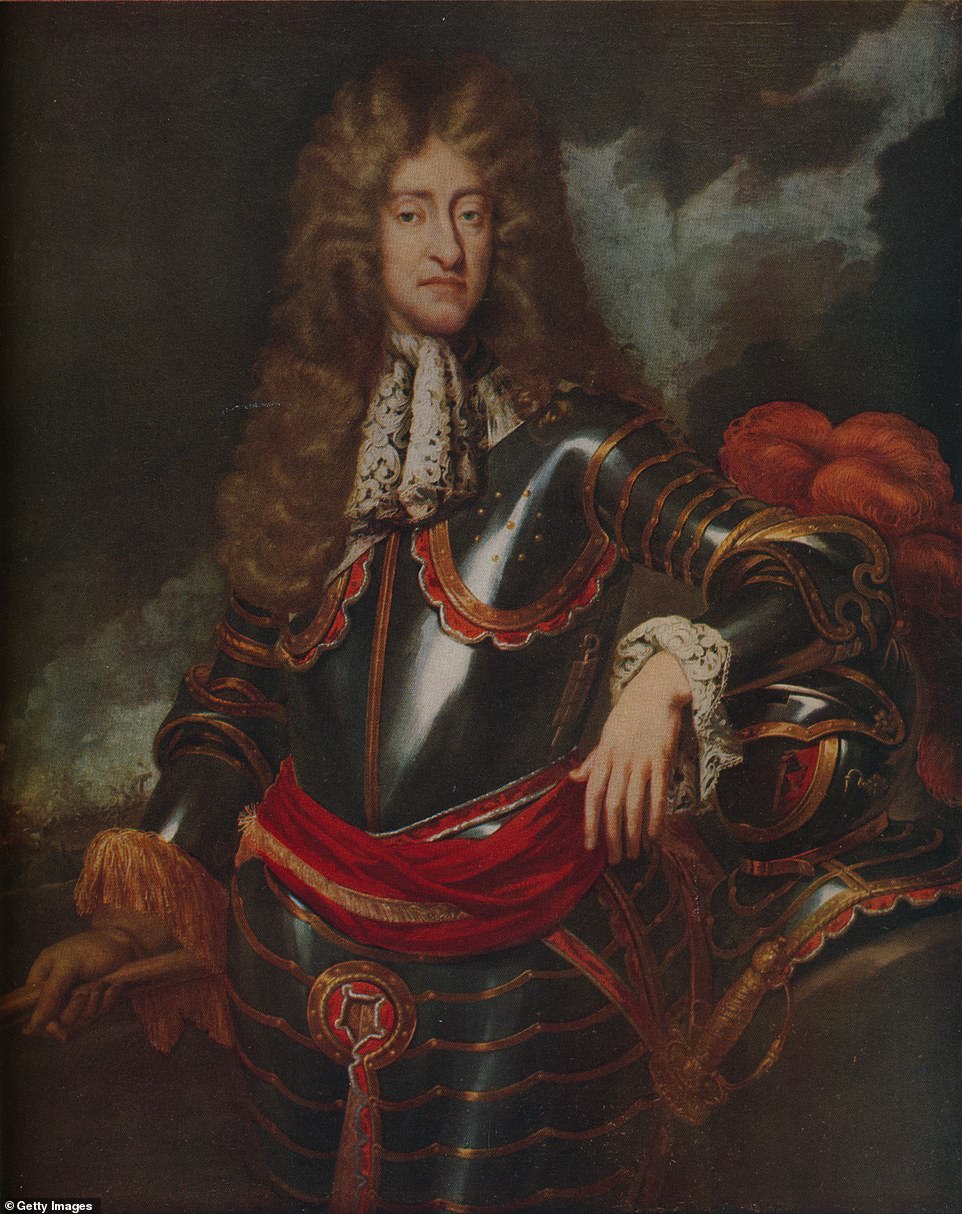 James Stuart, later James II of England (depicted here), survived the sinking but up to around 200 sailors and passengers lost their lives, largely due to the future king’s actions

Professor Claire Jowitt, a maritime history expert at the University of East Anglia, has called it the most important maritime discovery since the Mary Rose, the warship from the Tudor navy of King Henry VIII.

The Mary Rose sank in battle in the Solent in 1545, and was raised in 1982, later being put on display in Portsmouth.

‘It is an outstanding example of underwater cultural heritage of national and international importance.’

The explorers discovered the wreck in June 2007 after a four-year search covering 5000 nautical miles.

In 2012 one of the rescued finds – the ship’s bell, manufactured in 1681 – was used by the Receiver of Wreck and Ministry of Defence to conclusively confirm the wreck was the Gloucester.

It is only now, 10 years on, that the ship’s discovery can be made public, largely due to the need to protect an ‘at risk’ site, which lies in international waters.

However, the exact location of the wreck is protected and still cannot be disclosed.

HMS Gloucester was commissioned in 1652, built at Limehouse in London, and launched in 1654.

In 1682 it was selected to carry James to Edinburgh to collect his heavily pregnant wife and their households.

The aim was to bring them back to King Charles II’s court in London in time, it was hoped, for the birth of a legitimate male heir.

The ship set sail from Portsmouth, with James and his entourage joining it off Margate in Kent, having travelled by yacht from London. In all there were around 330 people on board.

At 5.30am on May 6, HMS Gloucester hit the treacherous Norfolk sandbanks some 28 miles (45km) off Great Yarmouth following a dispute between James, then the Duke of York, and the ship’s pilot James Ayres about how to navigate them.

The Duke, a former Lord High Admiral, had quarrelled with the pilot James Ayres the previous night about what course to follow to avoid the treacherous Norfolk sandbanks. 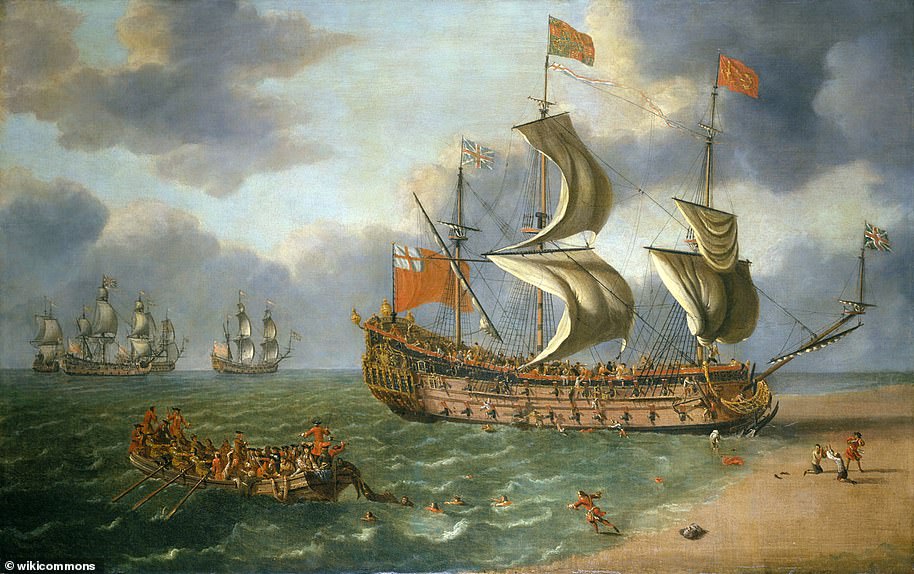 Wreck of the ‘Gloucester’ off Yarmouth, May 6, 1682. Since running aground on a sandbank on May 6, 1682, the wreck of the warship the Gloucester has lain half-buried on the seabed

It sank within an hour of the strike, killing roughly around 150 to 200 crew and passengers.

James barely survived, having delayed abandoning ship until the last minute, needlessly costing the lives of many who, because of protocol, could not abandon the ship before royalty.

Shortly before the ship sank, James escaped into one of the Gloucester’s small boats with his close friend the courtier John Churchill (later 1st Duke of Marlborough).

The boat had been hoisted into the sea and the Duke finally consented to be taken to the safety of one of the accompanying yachts, the Mary, which was part of the fleet. He then hurried to Edinburgh, arriving on May 7 about 8pm.

James clearly influenced the choice of the HMS Gloucester’s route but accepted no responsibility when disaster struck and solely blamed the pilot, wishing him to be hanged immediately (though he was in fact court martialled and imprisoned).

James went on to reign as King James II of England and Ireland and James VII of Scotland from 1685 until 1688, when he was deposed by the Glorious Revolution.

Diarist and naval administrator Samuel Pepys, who witnessed events from another ship in the fleet, wrote his own account of the tragic sinking.

Pepys described the harrowing experience for victims and survivors, some of whom were picked up ‘half dead’ from the water.

He also commented on how much more serious the disaster might have been: ‘Had this fallen out but two hours sooner in the morning, or the yachts at the usual distance they had all the time before been, the Duke himself and every soul had perished.’

‘It was our fourth dive season looking for Gloucester,’ said Lincoln Barnwell, who led efforts along with his brother Julian.

‘We were starting to believe that we were not going to find her, we’d dived so much and just found sand.

‘On my descent to the seabed, the first thing I spotted were large cannon laying on white sand, it was awe-inspiring and really beautiful.

‘It instantly felt like a privilege to be there, it was so exciting.

‘We were the only people in the world at that moment in time who knew where the wreck lay. That was special and I’ll never forget it.

‘Our next job was to identify the site as the Gloucester.’

The Barnwell brothers found the wreck site with their late father Michael and two friends including James Little, a former Royal Navy submariner and diver.

The ship was found split down the keel with the remains of the hull submerged in the sand. 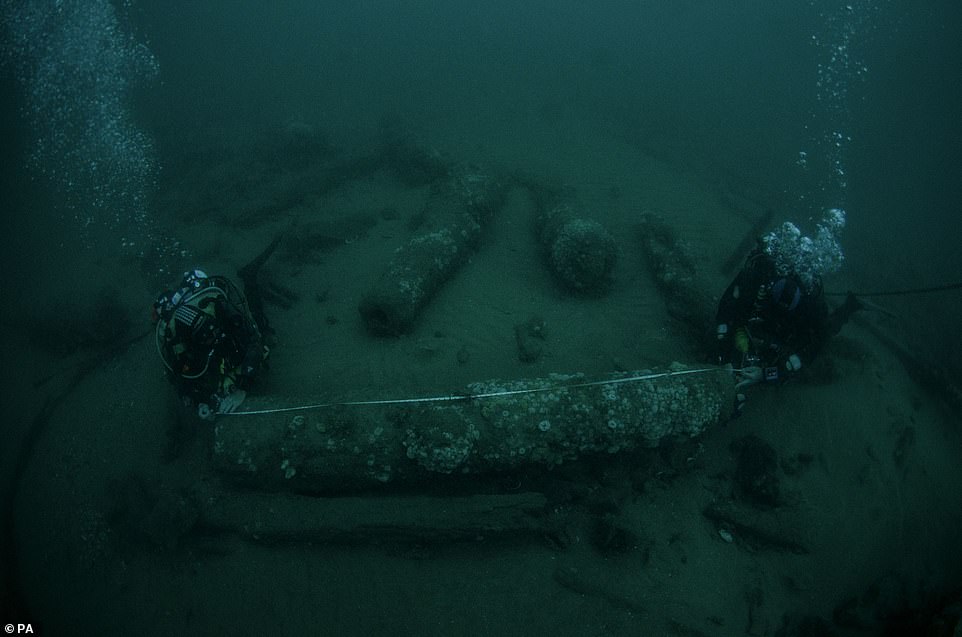 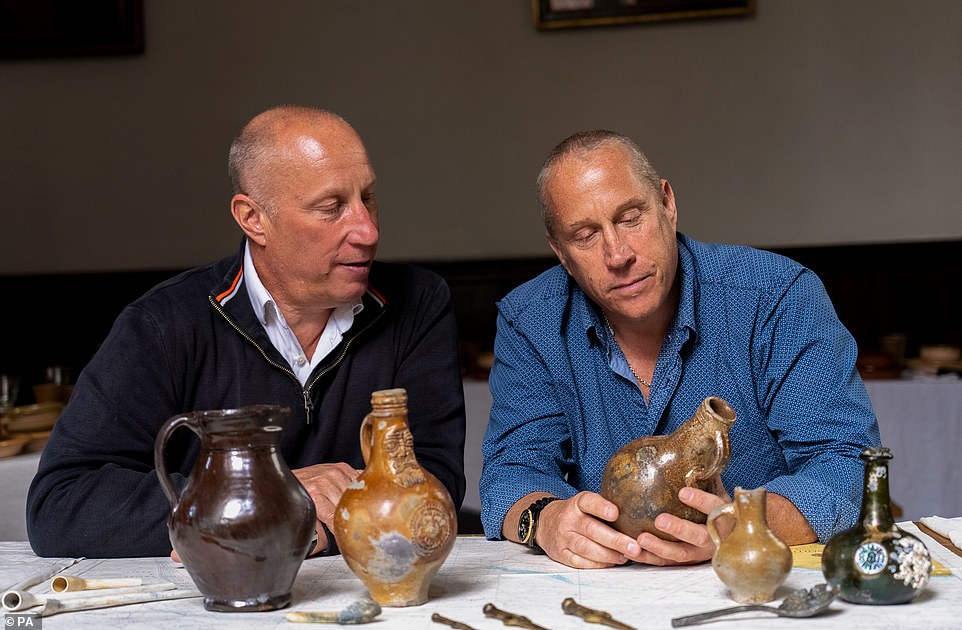 The Barnwell brothers are Norfolk-based printers, licensed divers and Honorary Fellows in the School of History at UEA. Lincoln said he was partly inspired to search for the wreck after watching the lifting of the Mary Rose on television as a child

As well as the Receiver of Wreck and Ministry of Defence, the wreck has been declared to Historic England.

Artefacts rescued and conserved from the wreck include clothes and shoes, navigational and other professional naval equipment, personal possessions, and many wine bottles.

One of the bottles bears a glass seal with the crest of the Legge family – ancestors of George Washington, the first US President.

The Legge family crest was a forerunner to the Stars and Stripes flag.

There were also some unopened bottles, with wine still inside, offering opportunities for future research. 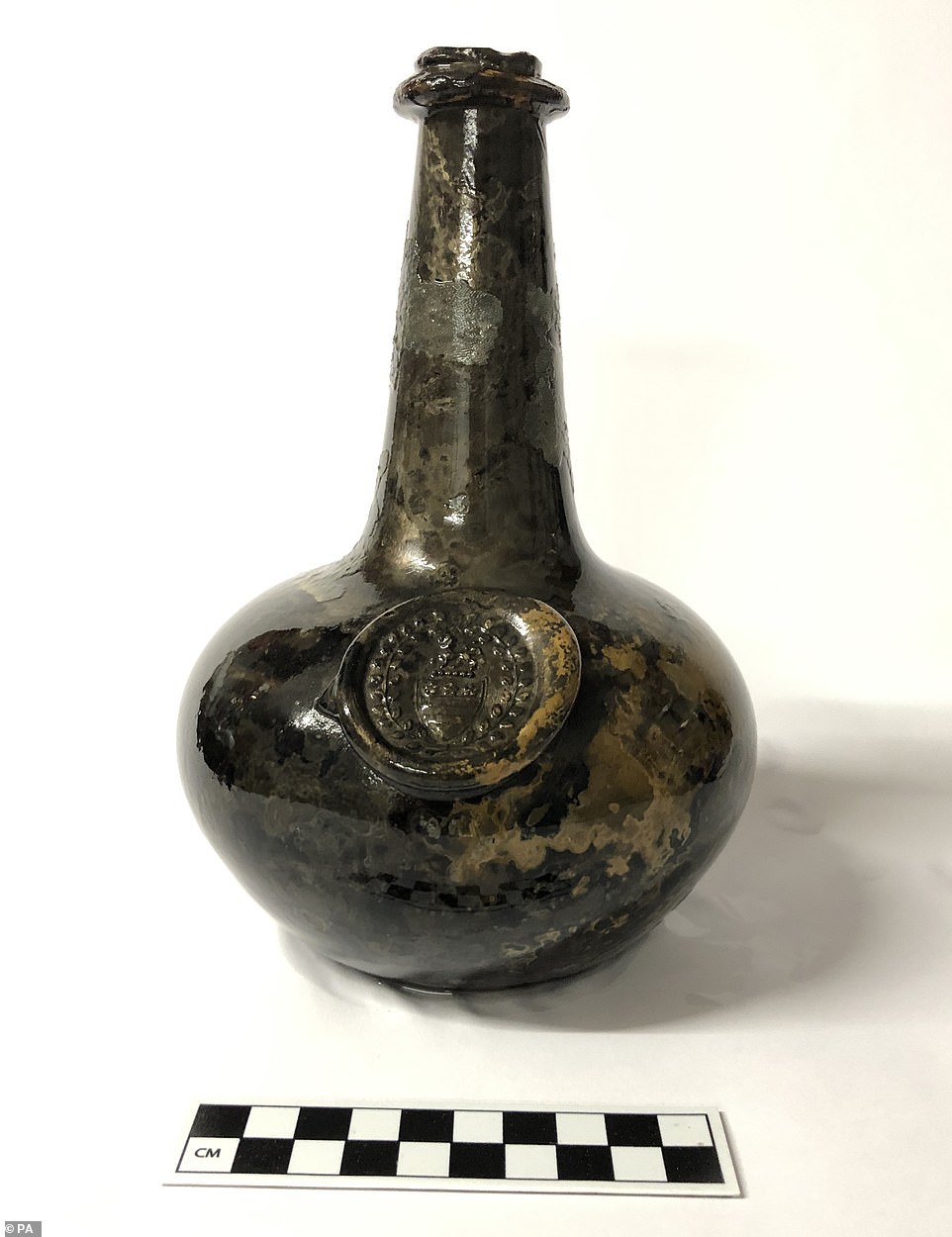 Pictured, one of the glass bottles found with the wreck, which also bears a seal with the crest of the Legge family, ancestors of George Washington, the first US President 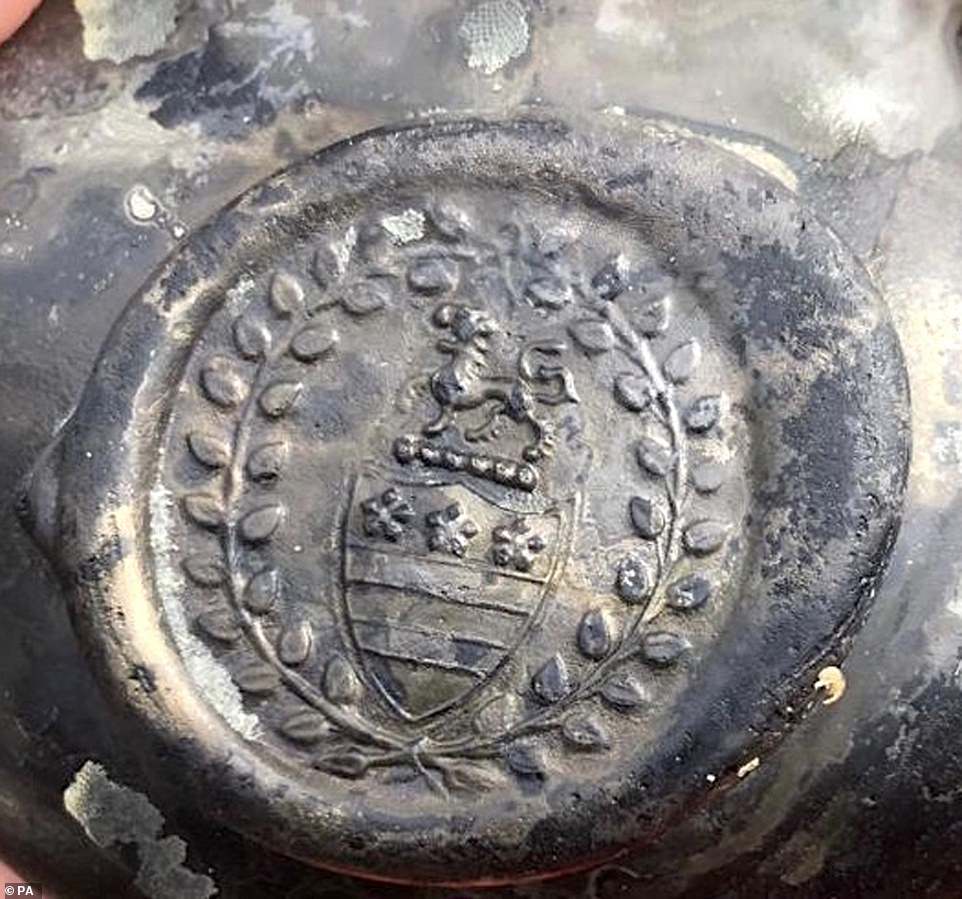 Photo issued by Norfolk Historic Shipwrecks shows a close-up of the crest of the Legge family. The Legge family crest was a forerunner to the Stars and Stripes flag

Next year’s exhibition, entitled ‘The Last Voyage of the Gloucester: Norfolk’s Royal Shipwreck’, will display finds from the wreck and share ongoing historical, scientific and archaeological research.

Ultimately, researchers want to shed more light on the identity and lives of those who sadly lost their lives.

‘A tragedy of considerable proportions in terms of loss of life, both privileged and ordinary, the full story of the Gloucester’s last voyage and the impact of its aftermath needs re-telling, including its cultural and political importance, and legacy,’ Professor Jowitt said.

‘We will also try to establish who else died and tell their stories, as the identities of a fraction of the victims are currently known.’

HOW COULD BRITISH HISTORY HAVE BEEN DIFFERENT IF JAMES HAD DIED ON HMS GLOUCESTER?

At the time of the sinking of HMS Gloucester, Charles II was on the throne. His brother James, Duke of York, was next in line for the throne.

If James had drowned in 1682, British history would probably have looked very different. Charles II’s illegitimate son – James Scott, the Duke of Monmouth – may very well have inherited the throne on his father’s death in 1685.

The Glorious Revolution of November 1688, which created a new type of state and contributed greatly to the modern world, would not have happened.

Or perhaps in 1685 another civil war might have ensued between those who supported the claim of King Charles’s illegitimate Protestant son, Monmouth, against the claims of the Duke of York’s legitimate Protestant daughter Mary and her foreign husband William of Orange (a difficult choice for patriotic Protestant Englishmen since William controlled his wife politically).

At the time of the disaster in 1682, there were political and religious tensions surrounding James.

James’ Catholicism became widely known after the introduction of the Test Act in February 1673, where those refusing to take an oath denouncing the Catholic belief in transubstantiation were debarred from holding public office.

In June, James was forced to resign his position as Lord High Admiral, and his marriage in September 1673 to the Catholic Princess Mary of Modena indicated to his Protestant countrymen his enduring commitment to the Roman faith.

Protestants suspected that Mary was determined to affect the conversion of England, making her and her husband unpopular.

James’ Catholicism provoked a major constitutional crisis between 1678-81 when a group of English Protestants called the Country Party, later termed the Whigs, attempted to exclude James from inheriting the throne, fearing that a Catholic king would be the puppet of the French Catholic king, Louis XIV.

There were a number of conspiracies, where it was widely believed that there were plots to murder Charles II and replace him with his Catholic brother.

Most prominently the so-called Popish Plot (1678) provoked mass hysteria. As a result, James was increasingly vilified and, fearing the overthrow of his own rule, Charles II ordered James and his family to reside first in the Hague and then Scotland, where he mainly remained from 1679-82.

James II, thought as largely responsible for the sinking of HMS Gloucester and resulting loss of life, has also been condemned in the modern day for his links with the slave trade.