The boss of advertising giant WPP has said England’s victory at the Euro 2022 football tournament will ‘attract new sponsors’ to women’s sport.

Mark Read expects ‘a lot of brands’ will want to try to associate themselves with the Lionesses, who beat Germany 2-1 last Sunday.

‘I think it’s definitely going to put women’s football on the map,’ Read said. ‘It was a good final played by a great team and I think a lot of brands will look at that and think they want to be associated with it.’

Roaring success: England celebrate their victory over Germany after the Euro 2022 final

WPP has its own sports marketing business and has worked with clients including world football’s governing body FIFA and the Premier League, and could be eyeing up its own opportunities for expansion following the final.

The chief executive’s comments came as WPP upgraded guidance after reporting higher half-year profits amid strong demand for its services, which include public relations and creative agencies.

It reported a profit of £419m for the first six months of 2022, up 6 per cent year-on-year, while revenues climbed 10 per cent to £6.8billion. Major client wins in the second quarter included Audi, Nationwide and food group Danone. 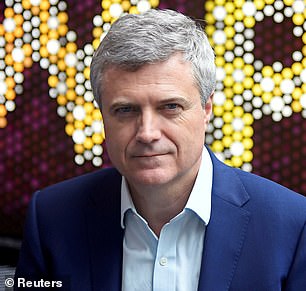 WPP predicts revenue growth of 6 per cent to 7 per cent, up 0.5 percentage points on previous forecasts.

AJ Bell director Russ Mould said: ‘Clearly there is a belief that recent momentum, which helped it lift its annual sales outlook, can’t last in the long-term.’

Advertising giants such as WPP are often seen as bellwethers for the wider economy, as when companies are feeling confident in their prospects they tend to boost spending on adverts and marketing, and cut back during downturns.