A would-be supermarket queue-jumper was tackled to the ground by police and arrested after reportedly abusing Tesco staff and customers.

Dramatic footage captures the man as he is pinned to the ground by four police officers at the store in Middleton, Greater Manchester.

Police had been called to the supermarket amid reports of the man ‘behaving aggressively’ towards staff and customers.

The man, 21, was arrested on suspicion of theft in connection with an earlier incident at a Co-Op store.

He was then further arrested once in custody on suspicion of possession of Class A and Class B drugs.

Police were called to reports of someone ‘behaving aggressively’ at Tesco in Middleton, Manchester

Terrified witnesses said the man began raising his voice after attempting to cut the line as shoppers observed social distancing measures outside the store.

Robert Comnoiu, 23, was with his girlfriend Deena Potter, 30, outside the shop.

He said: ‘We had just finished our weekly shop. Then we heard screaming.

‘This man came running from the store and knocked my girlfriend over as he pushed her trying to run away.

‘A security guard tried to get hold of him, but he was getting away. A second guard then came and they got him on the ground.’

Mr Comnoiu said the security guards let the man stand up but after he started to be aggressive again, they kept him on the ground until police arrived. 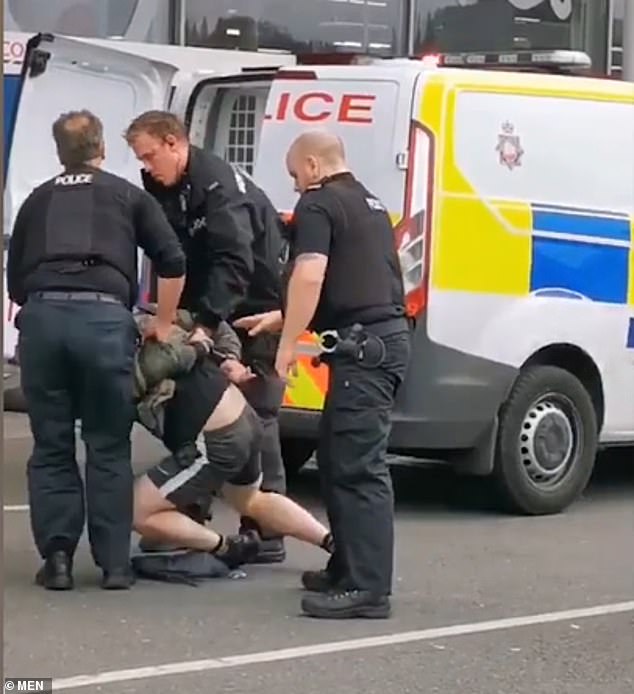 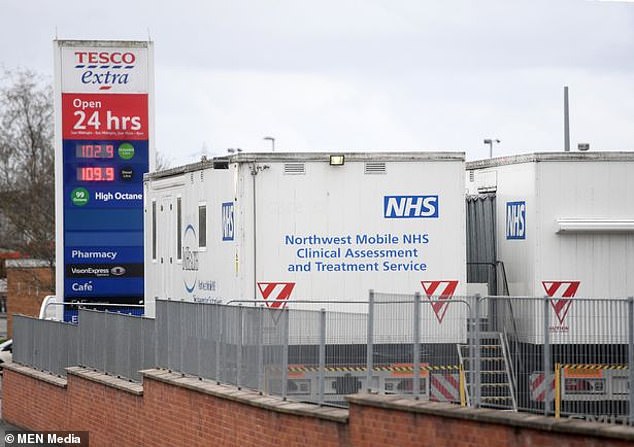 A coronavirus assessment centre has been set up at Tesco in Middleton. There are currently five NHS clinical assessment pods

He said Ms Potter was shocked but not hurt and added: ‘I think he had tried to get into the shop without queuing like everyone else.’

A spokesperson for Greater Manchester Police said: ‘Shortly before 1.25pm today (April 26), police were called to reports of a man behaving aggressively towards customers and staff at Tesco on Barton Road, Middleton.

‘Once in custody, the man was further arrested for possession of Class A and Class B drugs. He has been taken to hospital for treatment. There are no reported injuries.’

A coronavirus assessment centre has been set up in the car park at the store, providing appointments for people believed to be carrying the virus.