Some animals are genetically predisposed to die before reaching old age to benefit the rest of the colony, according to a new British study.

Caenorhabditis elegans, a roundworm that shares genetic traits with humans, is programmed to die early to reduce its colony’s demand for food, scientists say.

These organisms possess a genetic ‘self-destruct programme’, preventing them from living beyond a certain age to benefit younger worms.

Mutations to these C. elegans genes can massively increase their lifespan, most likely by switching off their life-shortening programme.

The new study is said to be the first evidence of programmed, adaptive death in an animal that has evolved for the benefits to its wider community.

C. elegans has been extensively used as a model organism to understand biological phenomena like ageing. UCL researchers investigated the specifics of the C. elegans life cycle to understand why programmed death may work for them, by devising computer models of a C. elegans colony growing on a limited food supply

‘Our findings are consistent with the old theory that ageing is beneficial in one way, as they show how increasing food availability for your relatives by dying early can be a winning strategy, which we call consumer sacrifice.’

The UCL researchers hypothesised that colonies of closely-related individuals – such as C. elegans – evolved to develop a programmed death mechanism.

To test their theory, the University College London (UCL) devised computer models of a C. elegans colony growing on a limited food supply.

The researchers also looked at the impact of shorter lifespans on the overall capacity of reproductive yields – in this case ‘Dauer larva’, which is an alternative developmental stage of nematode worms. 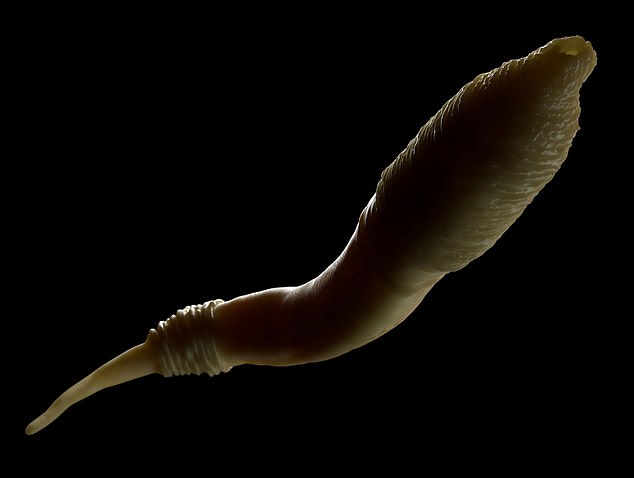 Caenorhabditis elegans (pictured here as a 3D render) is a free-living, transparent nematode, or roundworm, about 0.03 inches (1mm) in length

‘This is because other individuals who live longer would consume resources left behind by altruistic comrades and outcompete them, in what’s called a tragedy of the commons.

‘But it was recently discovered that wild C. elegans roundworms live in colonies of identical worms, which would prevent long-living worms with different genes from taking over.’

C. elegans is a non-parasitic species of worm of the nematoda phylum, about 0.03-inches in length.

But what’s special about the species is it’s commonly used by scientists in ageing research.

This is because it actually shares many of its genes with humans due to both species sharing a common ancestor.

This similarity allows scientists to assess the effects of genetic and environmental interventions in the worms to research how to extend lifespans.

Cycles depicted of the reproductive fitness of C. elegans, both for the individual worm and its colony. In the wild, C. elegans populations experience cycles of boom and bust. When dauer larva encounters a new food patch, such as a rotting plant stem, it forms a colony

Despite the similarity, it’s unlikely that humans have a similar genetic ‘self destruct capacity’.

‘So this is not predicted to apply to humans, but it seems to happen a lot in colonial microorganisms.’

Adaptive death could also happen in some types of salmon, which spawn and die in huge numbers in the upper reaches of rivers.

‘It’s been shown that the rotting, dead salmon nourish the salmon fry,’ he said. ‘We call this form of adaptive death biomass sacrifice.’

The next stage in this area of research is to study real C. elegans colonies to test for behaviours predicted by the model, and then build more realistic models to understand adaptive death.

The study has been published in the journal Aging Cell.

WHY DO SCIENTISTS USE C.ELEGANS TO STUDY HUMAN DISEASE?

C. elegans is a small soil worm or nematode.

It shares a common ancestor with humans – known as the urbilaterian ancestor.

This ancestor, which lived 500-600 million years ago, is the relative of all bilaterally symmetric, multicellular organisms, including mammals.

Most genes involved in human development and disease were present in the urbilaterian ancestor.

Evolution is a process by which existing genetic mechanisms are conserved but changed slightly to result in distinct species.

As a result, C. elegans have neurons, skin, gut, muscles, and other tissues that are very similar in form and function to humans.

Two cellular pathways – ISS (insulin signalling) and TOR (controller of cell growth and aging) – in the roundworm are ‘conserved’, meaning that they have been passed down to humans through evolution.

Source: The University of Kansas