The world’s whitest paint is now thin enough to use on cars, trains and aeroplanes to keep them cool, a new study says.

The ultra-white coating, developed at Purdue University in Indiana, is 0.005-inch thick and reflects up to 97.9 per cent of sunlight.

Currently, paints on the market that are designed to reject heat only reflect somewhere between 80 and 90 per cent of sunlight.

The researchers created an earlier version of the paint – which was revealed last year and appears in this year’s edition of Guinness World Records – but this new version is thinner and lighter.

Purdue University researchers have created a new formula for the world’s whitest paint, making it thinner and lighter. Pictured is the previous iteration of the paint from last year (left) next to this new version, showing the difference in thickness 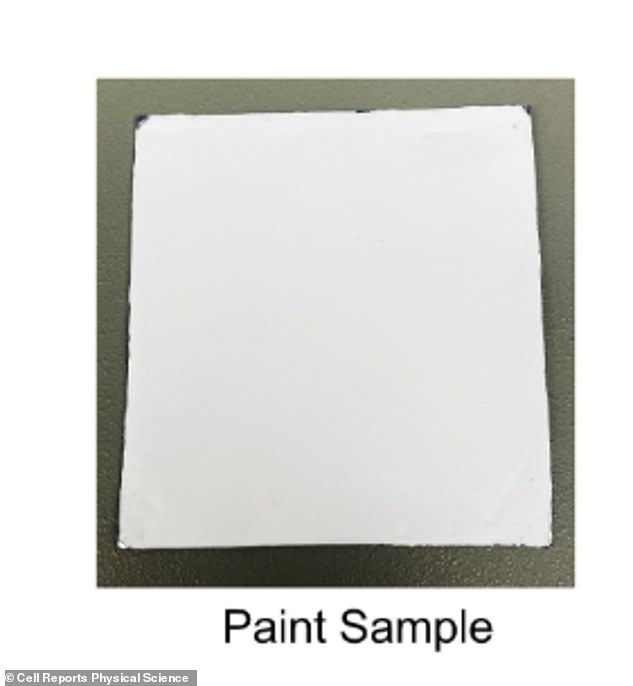 The ultra-white coating, developed at Purdue University in Indiana , is 0.005-inch thick and reflects up to 97.9 per cent of sunlight while sending away infrared heat 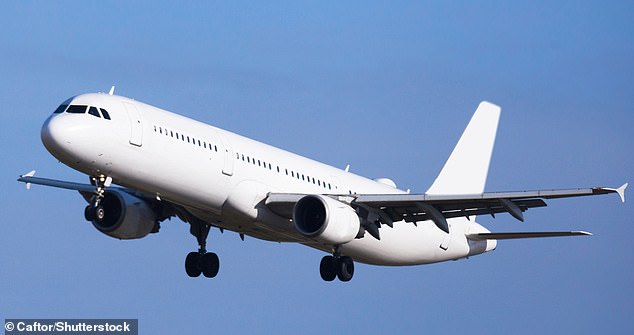 Only now is the team’s paint thin enough to coat vehicles such as planes, which have precise weight requirements (file photo)

Heat and light are both different types of energy. Light energy can be converted into heat energy.

A black object absorbs all wavelengths of light and converts them into heat, so the object gets warm.

A white object reflects all wavelengths of light, so the light is not converted into heat and the temperature of the object does not increase noticeably.

The amount of heat absorbed is also affected by how light or dark an object is.

This new version is thin enough to coat vehicles such as planes, which have precise weight requirements.

‘To achieve this level of radiative cooling below the ambient temperature, we had to apply a layer of paint at least 400 microns [0.4mm] thick,’ said study author Professor Xiulin Ruan at Purdue University.

‘That’s fine if you’re painting a robust stationary structure, like the roof of a building, but in applications that have precise size and weight requirements, the paint needs to be thinner and lighter.’

Professor Ruan and colleagues believe their paint will help the fight against climate change, as it can keep the surfaces of buildings cool enough to reduce the need for air conditioning.

‘This not only saves money, but it reduces energy usage, which in turn reduces greenhouse gas emissions,’ he said.

‘And unlike other cooling methods, this paint radiates all the heat into deep space, which also directly cools down our planet.’

According to the team, an aeroplane with the new coating wouldn’t have to run its air conditioning as hard on a summer’s day to cool the inside, which would save large amounts of energy.

The new paint incorporates hexagonal boron nitride as the pigment, a substance mostly used in lubricants.

On the microscale, the particles of this material also have a unique morphology, which the researchers call nanoplatelets.

Pictured, scanning electron microscope (SEM) images of the new paint, showing the nanoplatelets. The paint also incorporates voids of air, so on a nanoscale it appears highly porous 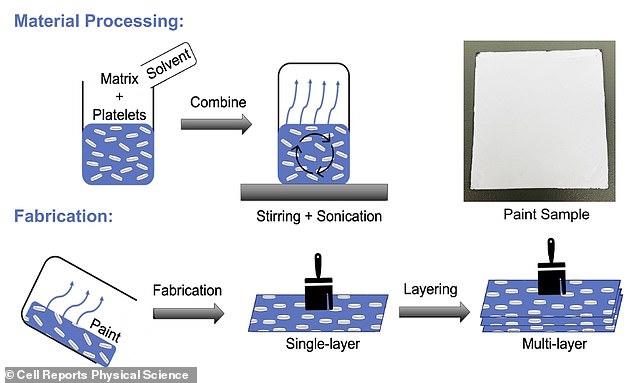 Computer simulations showed the nanoplatelets are more effective in bouncing back the solar radiation than spherical nanoparticles used in previous cooling paints.

The paint also incorporates voids of air, so on a nanoscale it appears highly porous and gives it a lower density, which, together with the thinness, reduces its weight.

The new paint, which has been detailed in Cell Reports Physical Science, is patented and could even appear in shops soon.

‘We are in discussions right now to commercialise it,’ Professor Ruan said. ‘There are still a few issues that need to be addressed, but progress is being made.’

The researchers believe that this white may be the closest equivalent to some of the blackest blacks ever developed. 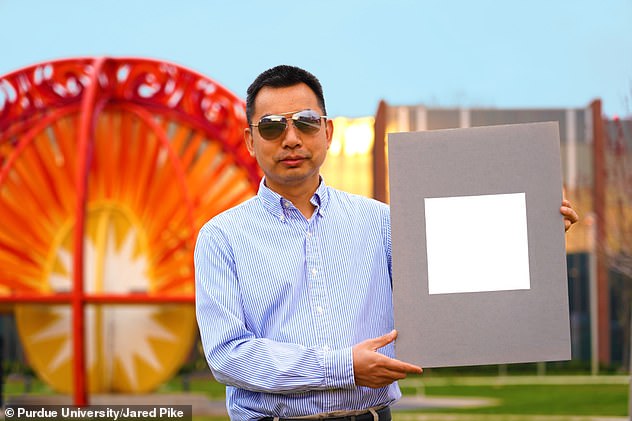 Xiulin Ruan, a Purdue University professor of mechanical engineering, holds up his lab’s sample of last year’s iteration of the ‘whitest paint on record’

A product called Vantablack, developed by Surrey NanoSystems, absorbs up to 99.965 per cent of visible light.

However, in 2019, Vantablack was bettered by a team at MIT, who pushed this to absorption rate to 99.995 per cent.

MIT covered a £1.6 million diamond with the substance in a bid to prove its blackness – and it promptly appeared to vanish.

The MIT material was made from vertically aligned carbon nanotubes – microscopic filaments of carbon – grown on a surface of chlorine-etched aluminium foil.