For 600 years it has steadfastly refused to give up its secrets and has beaten some of the world’s most brilliant brains including Alan Turing.

Eventually most agreed that it was either impossible to solve or else written in gibberish as an elaborate practical joke.

But a linguistics expert from Bristol University has now cracked it – and it took him just two weeks.

Doctor Gerard Cheshire worked out that it was written in a dead language – proto-Romance – and then by studying symbols and their descriptions he deciphered the meaning of the letters and words.

He discovered that the manuscript contains information on herbal remedies, therapeutic bathing and astrological readings about sex, matters of the female mind and parenting. 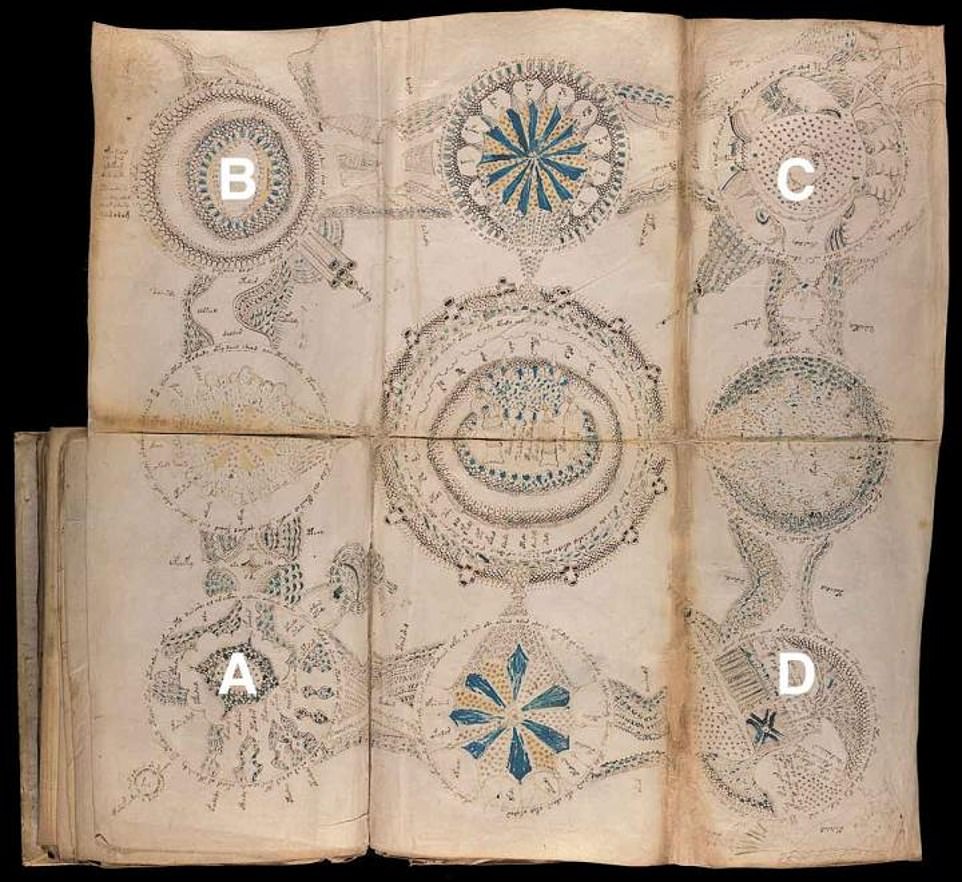 Within the manuscript there is a foldout illustrative map, provided here, that provides the necessary information to date and locate the origin of the manuscript. Vignette A illustrates the erupting volcano; B, depicts the volcano of Ischia; C shows the hows the islet of Castello Aragonese and D, represents the island of Lipari

It was written in accordance with the Catholic and Roman pagan religious beliefs of the time and has been carbon-dated to around the mid-15th century.

Dr Cheshire discovered that it was compiled by Dominican nuns as a source of reference for Maria of Castile, Queen of Aragon, who is the great aunt to Catherine of Aragon.

There are also images of Queen Maria (1401–58) and her court conducting trade negotiations whilst bathing as well s many other images of naked women bathing.

It demonstrates that the spa lifestyle was highly regarded as a form of physical cleansing and spiritual communion, as well as a general means of relaxation and leisure.

Also within the manuscript is a foldout illustrative map that helped Dr Cheshire to date and locate the origin of the manuscript.

The map tells the story of a rescue mission, led by the Queen of Aragon, to save the victims of a volcanic eruption in the Tyrrhenian Sea in 1444 off the western coast of Italy. 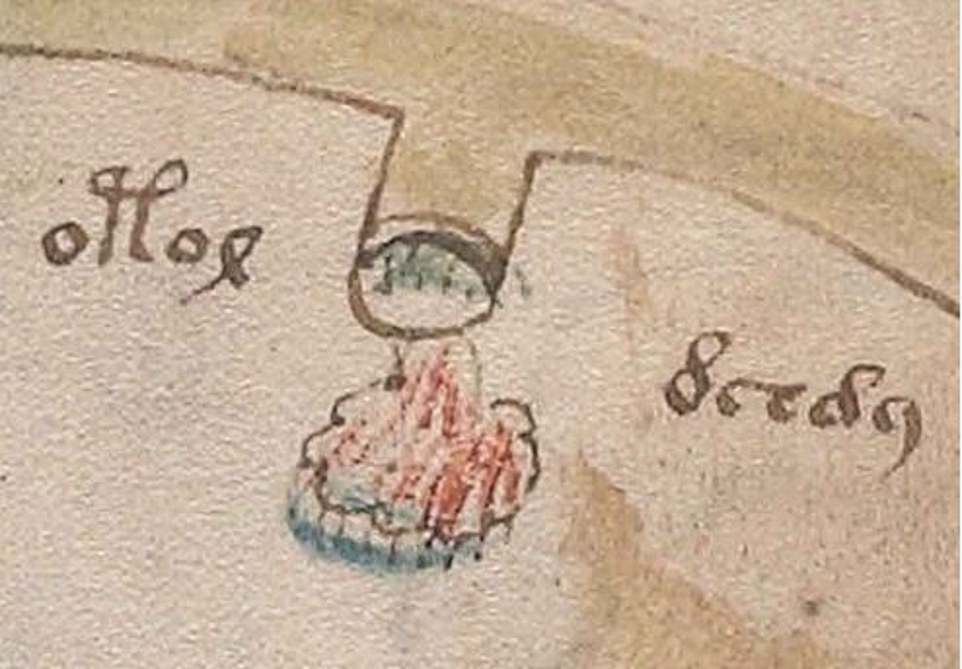 The figure shows a diagrammatic representation of a miscarriage or abortion, as a baby swaddled in bandages and a mass of blood exiting a tube, accompanied by the words ‘omor néna’ (killed/dead baby). The word ‘omor’ survives in Romanian, where it means ‘to murder’. The word ‘néna’ survives in Spanish, where it now means ‘female baby’ [‘néne’ is male baby]

This figure shows the word ‘palina’ which is a rod for measuring the depth of water, sometimes called a stadia rod or ruler. The letter ‘p’ has been extended and marked with the triple calibrations seen on a palina. The author has also added a whimsical eye because it reminds one of a snake. The word palina survives in modern Italian. The illustration shows a woman using a palina to gauge the depth of a bath

Furthermore, some of the manuscript text uses standard Latin phrasing and abbreviations, only adding more difficulty in deciphering it. 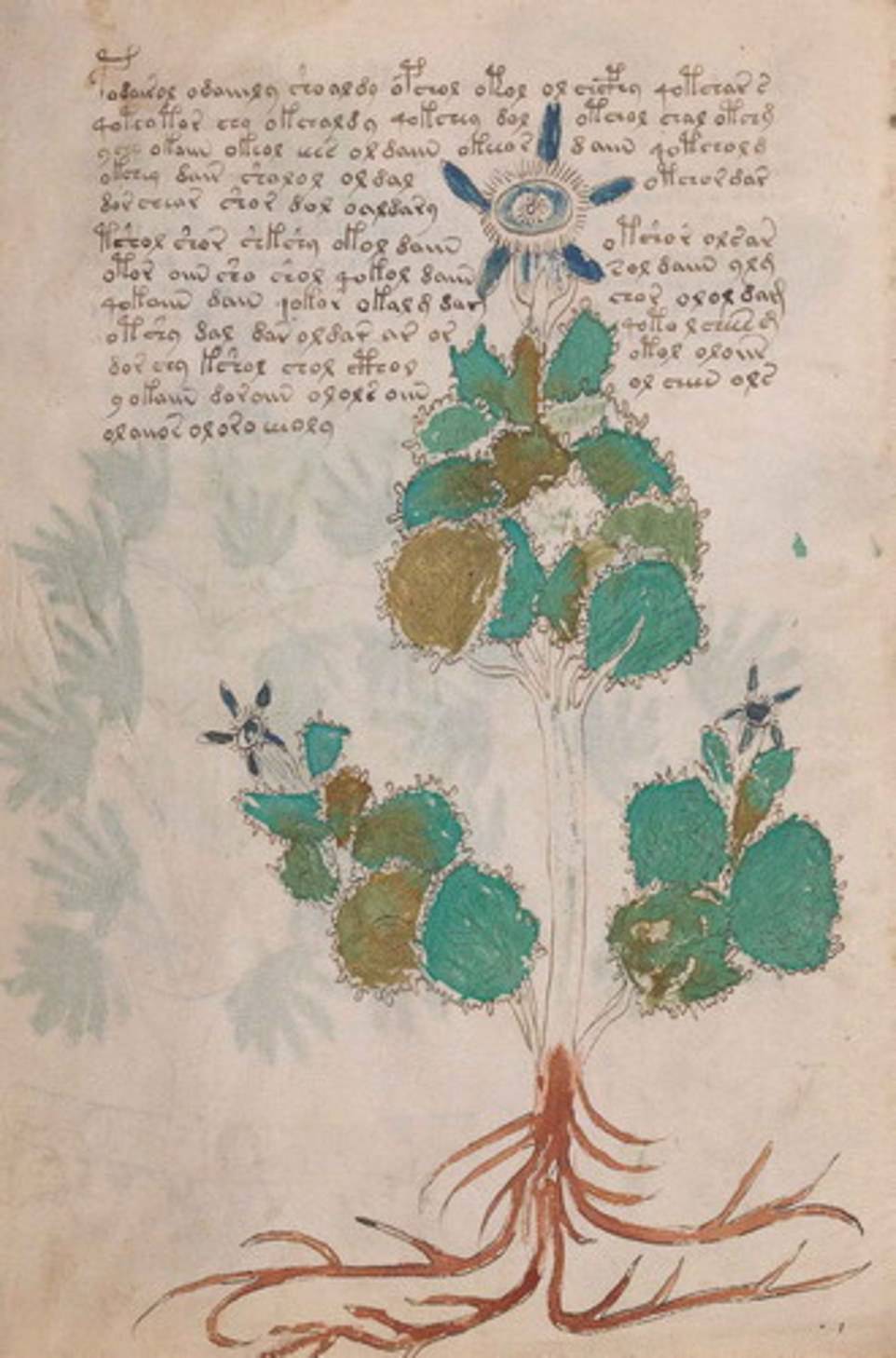 This figure shows Folio 19 left: Borage (Borago officinalis). The first line of the accompanying text reads: ‘panais-or o nauira æo arna o péor omor or é’epe a doméas t’ (the narrow golden taproot, its bark has the potency to kill the domestic/family belly). Borage oil has a long history as a toxic uterine stimulant for inducing miscarriage and abortion, which was commonly practised to deal with unwanted pregnancies as a form of birth control 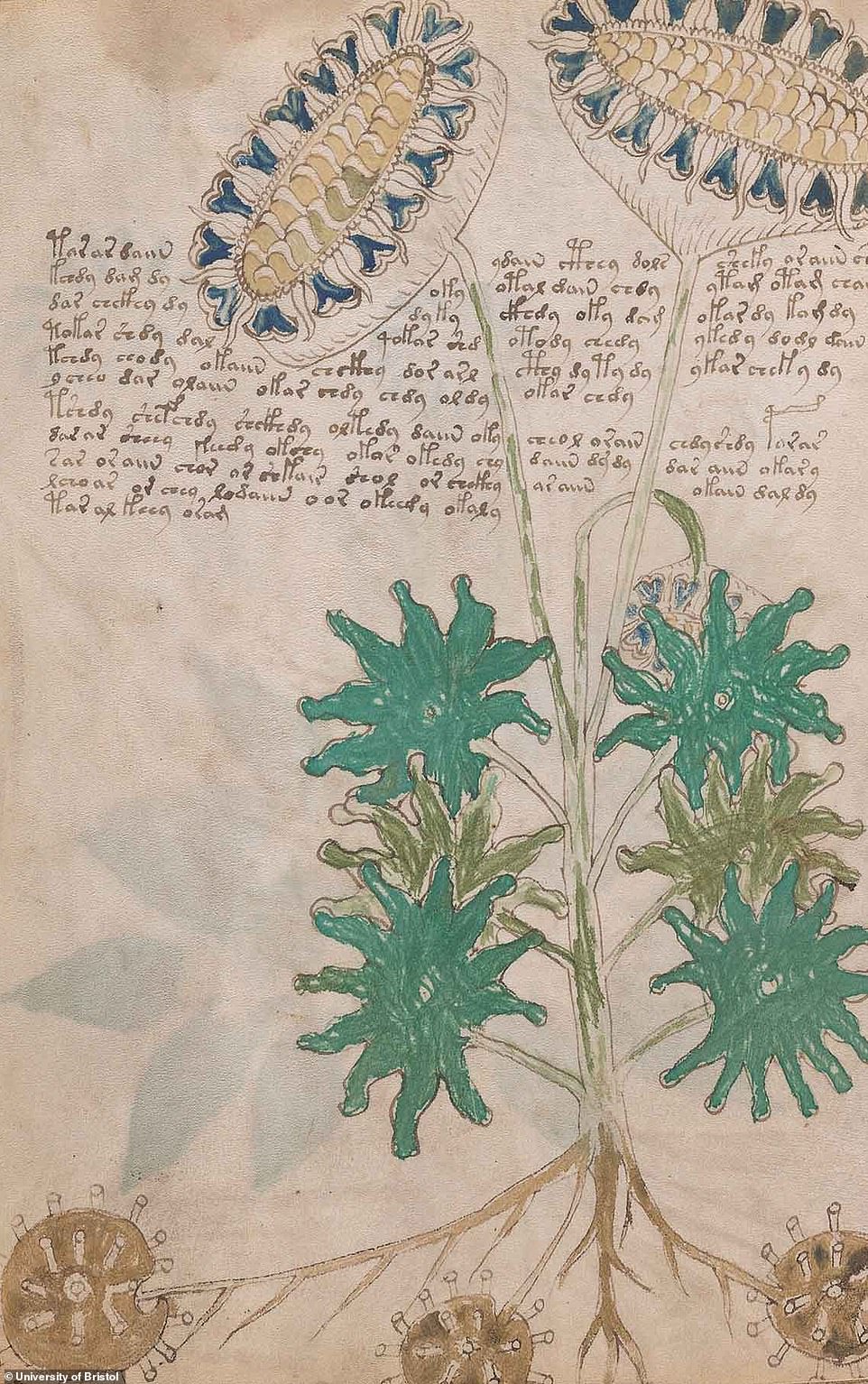 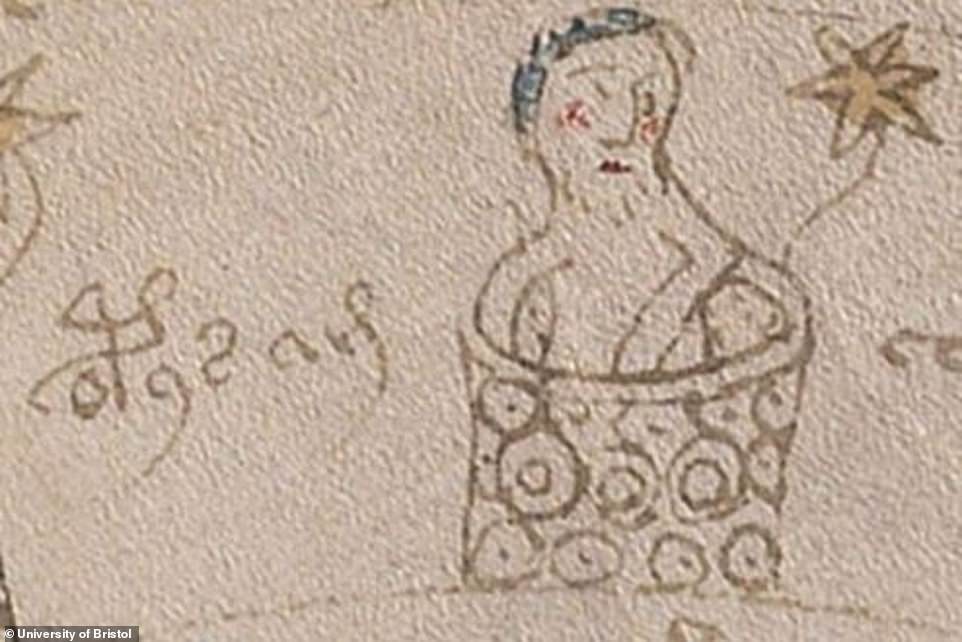 This figure shows an illustration of a bearded monk in his washtub, from the monastery where the manuscript was created. The words read: opat a sa (it is abbot). His is one of very few male faces seen in the manuscript. 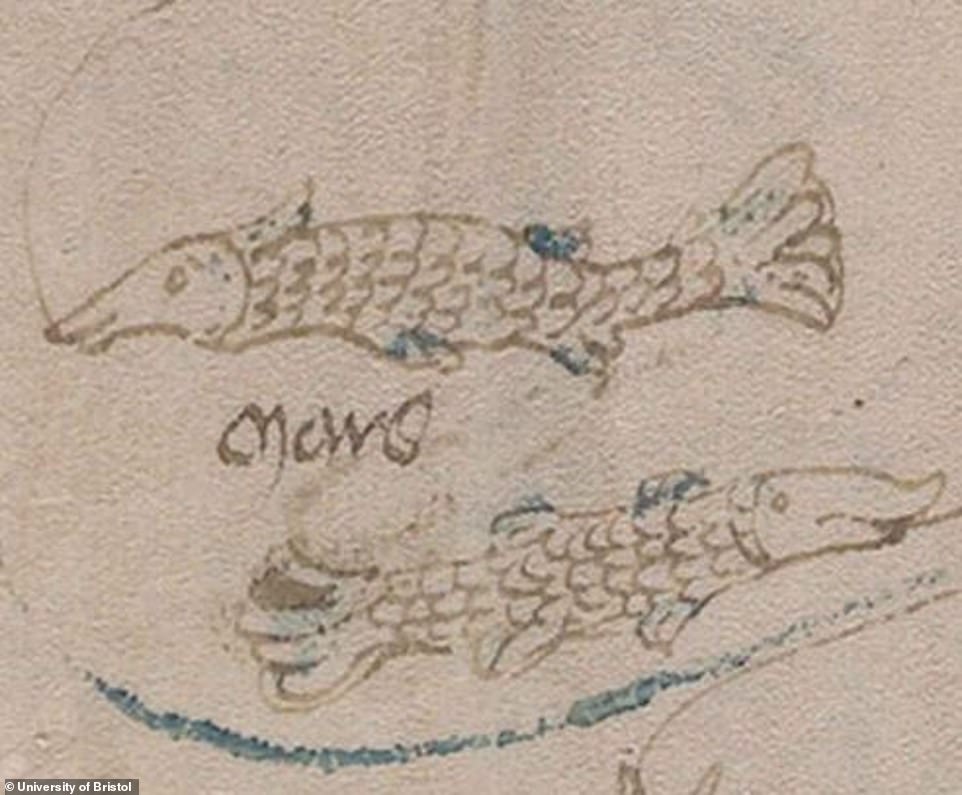 This shows the central disc from Folio 70 (right), portraying the Zodiac sign Pisces — two fishes. The word between the fish is ‘mars’, written in conventional Italics, which survives to mean the month of ‘March’ in French

The Voynich manuscript, named after Wilfrid M Voynich, a Polish book dealer who bought the manuscript in 1912, was written in Central Europe in around the 15th century, according to academics.

Its date, origin and language have been debated as vigorously as its puzzling drawings and undeciphered text featuring botanical and scientific drawings.

Among those who have famously attempted to crack the code are Alan Turing and his colleagues at Bletchley Park and the FBI during the Cold War.

The peer-reviewed study now says Dr Cheshire has revealed the its proto-Romance language, or vulgar latin, a ‘combination of unfamiliar and more familiar symbols’ in its alphabet.

This shows the central discs from Folio 71 (left and right), portraying the Zodiac sign ‘Aries’ — ram. Both images include the word ‘abril’ written in conventional Italics, which survives to mean the month of ‘April’ in Catalan, Galician, Occitan, Portuguese, Spanish, Turkish 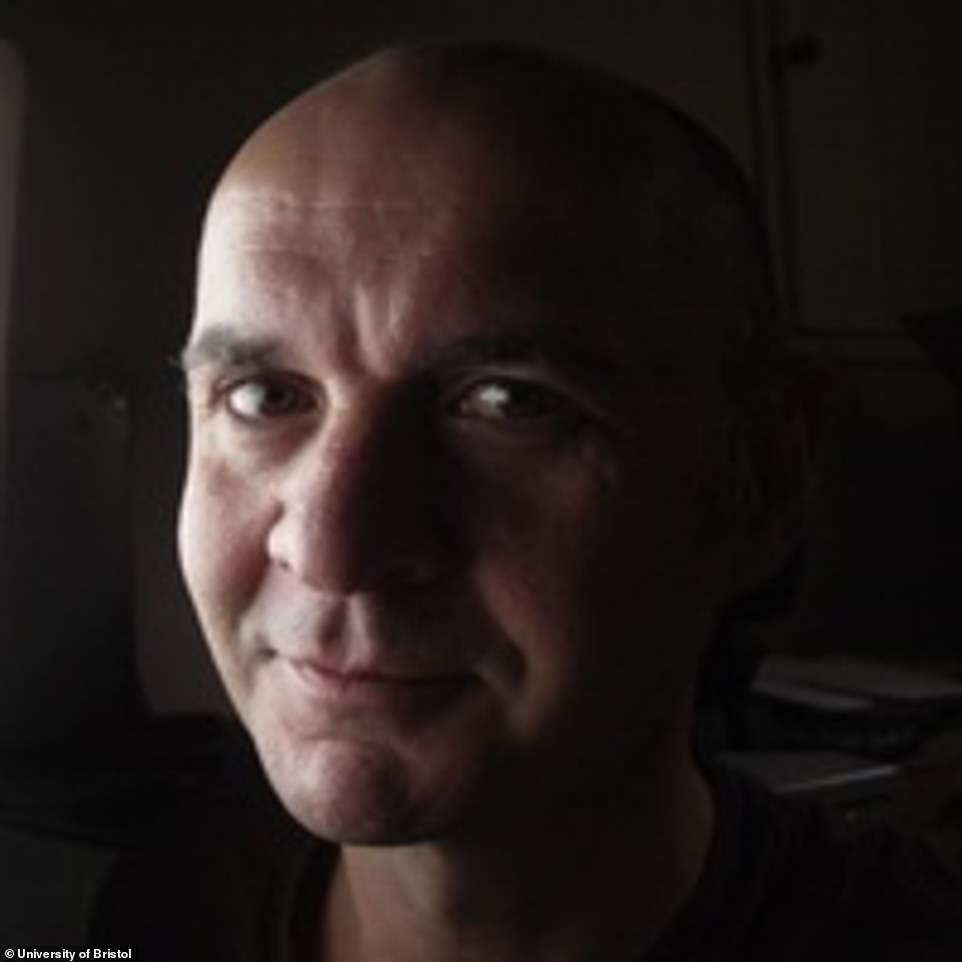 Some symbols are unfamiliar because they have different graphic origins or because they are variants which indicate particular uses and phonetic accents.

The language used was ubiquitous in the Mediterranean during the Medieval period, but it was seldom written in official or important documents because Latin was the language of royalty, church and government.

‘I experienced a series of ‘eureka’ moments whilst deciphering the code, said Dr Cheshire.

This, he said, was followed by a sense of ‘disbelief and excitement’ when he realised the magnitude of the achievement, both in terms of its linguistic importance and the revelations about the origin and content of the manuscript.

‘What it reveals is even more amazing than the myths and fantasies it has generated. 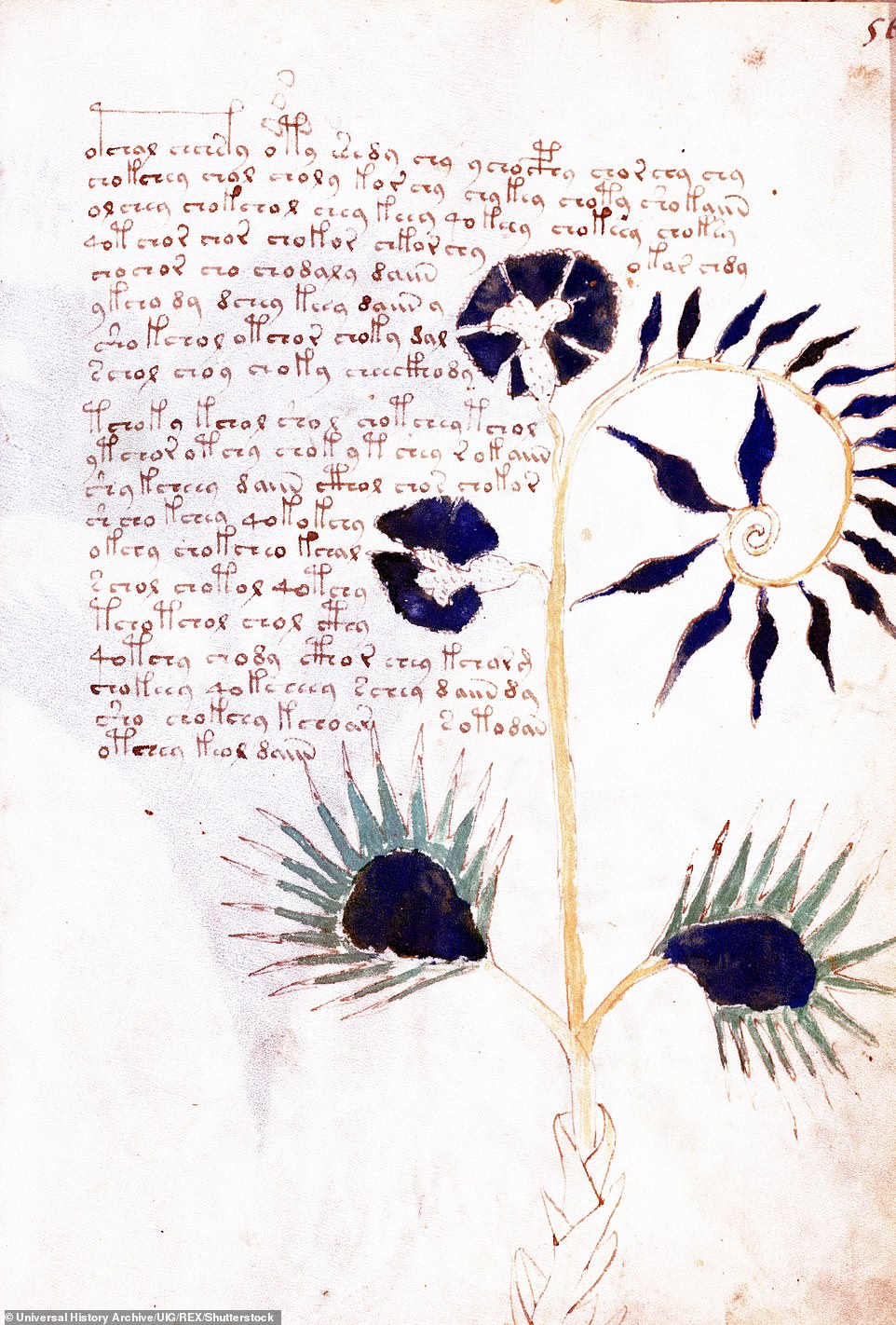 The eruption of Vulcanello, in Figure 39, is seen in both plan-elevation and in side-elevation cross-section, with a surprising level of detail and annotation that must have come from firsthand observation. In addition, there is the diagram of a nautical inclinometer over the water

The alphabet of the ’Proto-Romance’ language used in the Voynich manuscript runs from A to Z just like our modern Italic alphabet does.

It has no dedicated punctuation marks – but some of the letters have symbol variants to indicate punctuation.

And some of the symbol variants indicate phonetic accents.

All of the letters are in lower case and there are no double consonants.

There are instances where Latin stock-phrases are used and abbreviated by initial letters. 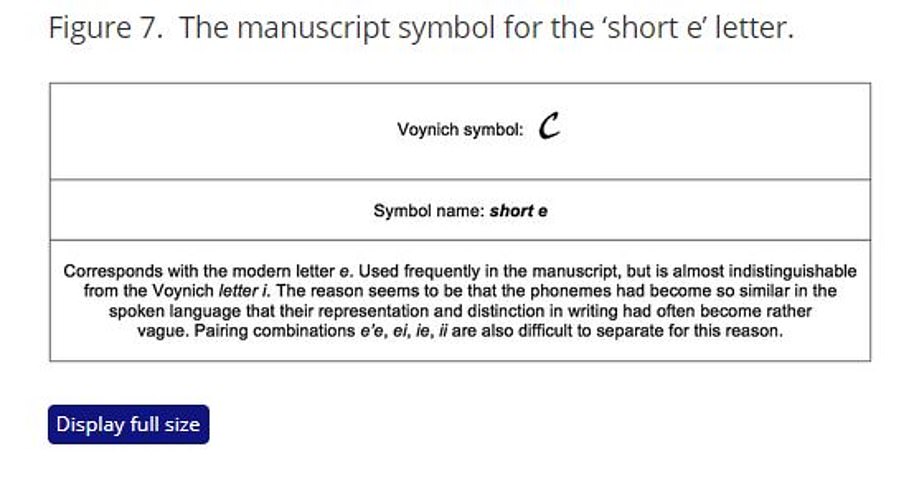 ‘It is also no exaggeration to say this work represents one of the most important developments to date in Romance linguistics.

‘The manuscript is written in proto-Romance – ancestral to today’s Romance languages including Portuguese, Spanish, French, Italian, Romanian, Catalan and Galician.

‘The language used was ubiquitous in the Mediterranean during the Medieval period, but it was seldom written in official or important documents because Latin was the language of royalty, church and government.

‘As a result, proto-Romance was lost from the record, until now.’ 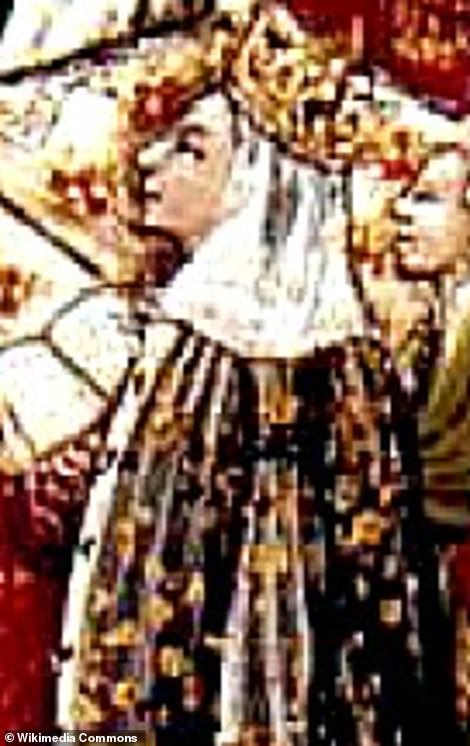 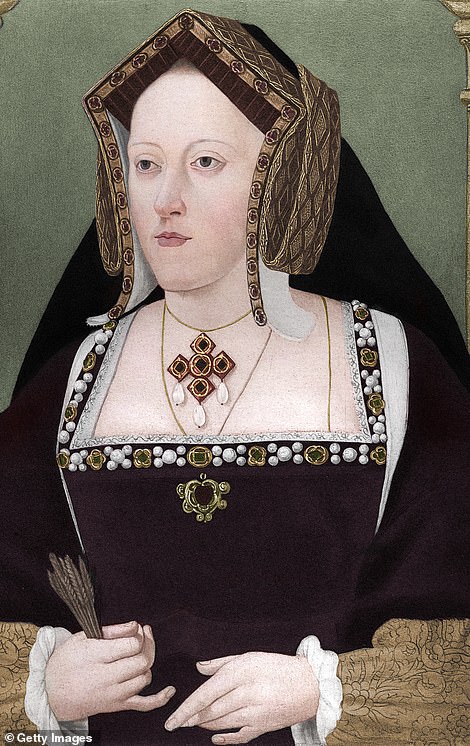 The text was compiled by Dominican nuns as a source of reference for Maria of Castile, Queen of Aragon, the great aunt to Catherine of Aragon. Although the purpose and meaning of the manuscript had eluded scholars, including Alan Turing, for over a century, it took only two weeks to identify the language and writing system

The next step is to use this knowledge to translate the entire manuscript and compile a lexicon, which Dr Cheshire acknowledged will take some time and funding, as it comprises more than 200 pages.

‘Now the language and writing system have been explained, the pages of the manuscript have been laid open for scholars to explore and reveal, for the first time, its true linguistic and informative content,’ he added.

The peer-reviewed paper, The Language and Writing System of MS408 (Voynich) Explained, is published in the journal Romance Studies.