Stand down, beanstalks and giant vegetables – the world’s largest plant has been discovered.

An Australian seagrass meadow has been announced as the biggest plant in the world, and is at least as old as Egypt’s great pyramids.

The aquatic ribbon weed covers about 77 square miles (200 square kilometres) of Shark Bay in Western Australia and has been hiding in plain sight.

It was long believed to be a collection of genetically varied individuals, but tests have revealed that, genetically speaking, it is all one entity.

The humongous plant, Posidonia australis, began life about 4,500 years ago when the ancient Egyptians were building the pyramids at Giza.

There are older seagrasses and terrestrial plants elsewhere in the world, but none are believed to be as large as this. 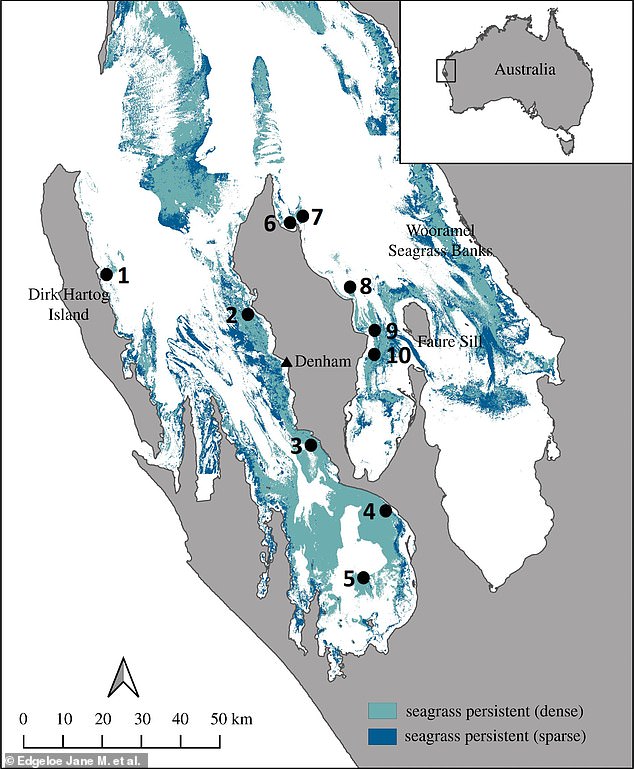 Shark Bay is buffered from ocean swells that could break the plant apart, and help it tolerate a wide range of temperatures and salinities

The meadows also grow in lines parallel to prevailing currents

Twelve of the world’s 60 species of seagrass are found in Shark Bay, with wireweed and ribbonweed being the two most common

Many species depend on seagrass, including a large dugong population that moves between different meadows during the year 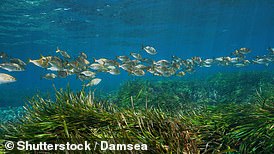 ‘It’s like someone’s lawn. It grows through rhizomes, these underground suckers, and then it pops up and green shoots appear,’ he said.

‘What we’ve observed in Shark Bay is essentially an extremely large lawn that has expanded and grown across a very large area.

‘There are some parts of the lawn that have died but there’s lots of parts that are still alive.’

The study’s senior author, University of Western Australia (UWA) evolutionary biologist Dr Elizabeth Sinclair, said the ribbon weed is a polyploid, meaning it has twice as many chromosomes as its oceanic relatives.

And that could explain its durability.

‘Polyploid plants often reside in places with extreme environmental conditions, are often sterile, but can continue to grow if left undisturbed, and this giant seagrass has done just that,’ she said.

‘Even without successful flowering and seed production, it appears to be really resilient, experiencing a wide range of temperatures and salinities plus extreme high light conditions, which together would typically be highly stressful for most plants.’

The flowers of Ribbonweed are bisexual and self-pollinating.

Floating fruits eventually split open and release seeds which sink and germinate in the sand.

She said they were blown away to realise the huge expanse was just one plant – the largest known to exist on earth.

‘The existing 200 square kilometres of ribbon weed meadows appear to have expanded from a single, colonising seedling,’ she said.

Researchers have now set up a series of experiments in Shark Bay to understand how the plant survives and thrives under such variable conditions.

Dr Breed said the plant, which provides vital habitat for dolphins, dugongs and fish, took a big hit in 2010 and 2011 when a marine heatwave struck, pushing water temperatures 39.2°F (4°C) above average.

But it has bounced back, and that is cause for optimism in the face of increasing stresses caused by climate change. 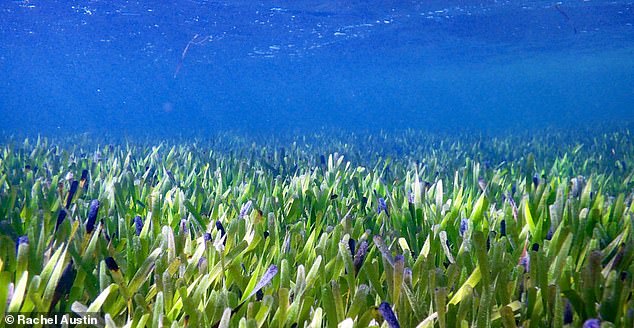 The Shark Bay ribbon weed  was long believed to be a collection of genetically varied individuals, but tests have revealed today that, genetically speaking, it is all one entity

‘It seems to have a way to hunker down and have the genetic toolkit to survive, no matter what conditions have been thrown at it so far,’ he said.

The research has been published today in the journal Proceedings of the Royal Society B.

The Australian Bureau of Meteorology says the country has warmed on average by 34.5⁰F (1.4⁰C) since 1910 as a result of climate change, increasing the risk of extreme weather events.

From 2010 to 2011, Western Australia experienced a marine heatwave that saw temperatures rise by up to 41⁰F (5⁰C) in some coastal waters, according to UWA.

In Shark Bay, around 36 per cent of the seagrass was damaged by this heatwave, with the ecosystem still recovering today.

Through its destruction it likely released some of its “locked in” carbon, affecting the animals it supports like dugongs, turtles and dolphins as well as thousands of fish species.

The UWA research team have been working with the indigenous rangers of Shark Bay, the Malgana, to figure out how best to restore seagrass in the areas that were most affected.

WHY IS SEAGRASS SO RESILIENT?

Seagrass is a polyploid, meaning it has twice as many chromosomes as its oceanic relatives

Polyploid plants very resilient, and can experience a wide range of temperatures and salinities plus extremely high light conditions

They are often sterile, but can continue to grow if left undisturbed 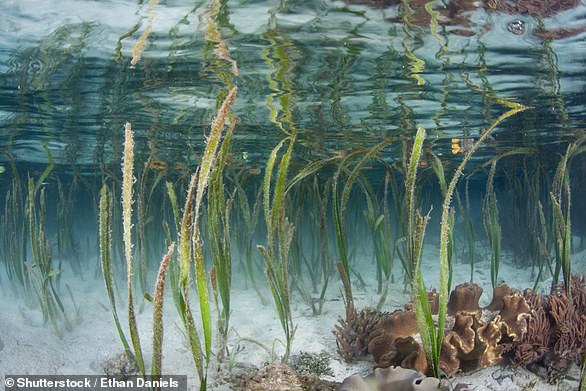 Ribbonweed seagrass flowers are bisexual and self-pollinating. Floating fruits eventually split open and release seeds which sink and germinate in the sand