Stratolaunch Systems Corp. chief executive Jean Floyd said Saturday the aircraft made a “spectacular” landing that was on the mark. Stratolaunch, which was founded by Allen, is vying to be a contender in the market for air-launching small satellites. He died in October.

“It was an emotional moment for me, to personally watch this majestic bird take flight, to see Paul Allen’s dream come to life in front of my very eyes,” Floyd told a teleconference briefing.

Floyd said that as the plane lifted off, “I did whisper a ‘thank you’ to Paul for allowing me to be part of this remarkable achievement.”

The behemoth, twin-fuselage Stratolaunch jet lifted off from Mojave Air and Space Port shortly before 7 a.m. PT Saturday and climbed into the desert sky 112 kilometres north of Los Angeles. The jet flew 2½ hours, achieving a maximum speed of 304 kilometres/hour (189 mph) and altitudes up to 5,181 metres (17,000 feet), the company said.

Test pilot Evan Thomas of Scaled Composites LLC, which built the aircraft, said the flight overall was “fantastic” and for the most part the plane flew as predicted.

“The airplane very nicely, smoothly rotated and really just lifted off the ground,” he said. “It definitely was ready to fly and wanted to fly and climbed out quickly.” 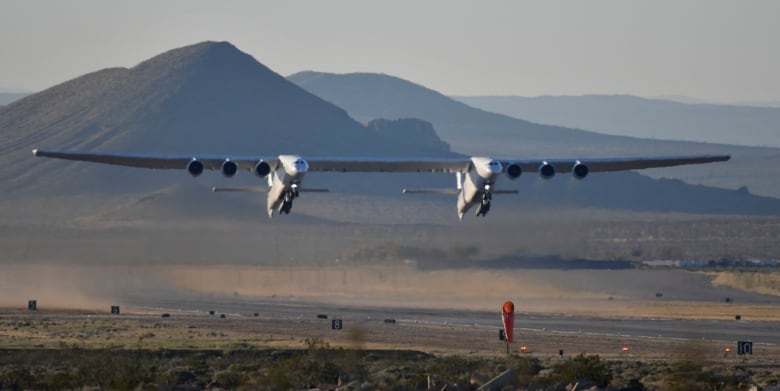 Thomas said there were “a few little things that were off-nominal but really for a first flight it was spot-on.” He did not specify what those things were, and briefing participants did not take questions.

Carries up to 3 rockets

The aircraft is designed to carry as many as three satellite-laden rockets at a time under the centre of its enormous wing, which stretches 117 metres — a longer wingspan than any other aircraft.

The advantages of such air-launch systems include being able to use numerous airports and avoid the limitations of fixed launch sites which can be impacted by weather, air traffic and ship traffic on ocean ranges.

Allen, the co-founder of Microsoft, founded Stratolaunch Systems Corp. in 2011 after emerging in aerospace by funding the development of the experimental air-launched SpaceShipOne, which in 2004 became the first privately built manned rocket to reach space. 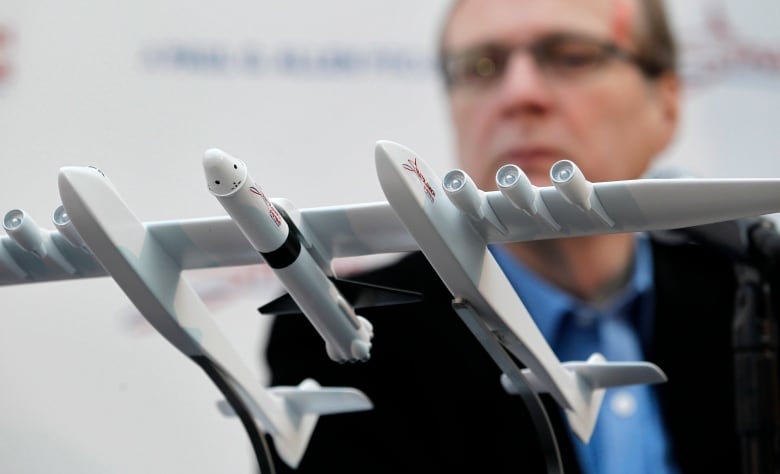 After Allen’s death in October 2018, Stratolaunch dropped plans to develop its own type of rocket engine and a family of launch vehicles, focusing instead on getting the giant plane airborne and launching Northrop Grumman’s proven Pegasus XL.

The Stratolaunch aircraft emerged from its Mojave hangar for the first time in May 2017 and proceeded through ground tests, including taxiing and rolling down a runway at near-takeoff speeds.

Powered by the same type of engines used by Boeing 747s, the aircraft is designed to take off at a maximum weight of 589,676 kilograms. Its twin fuselages — sort of the airplane equivalent of a catamaran — are 72.5 metres long. 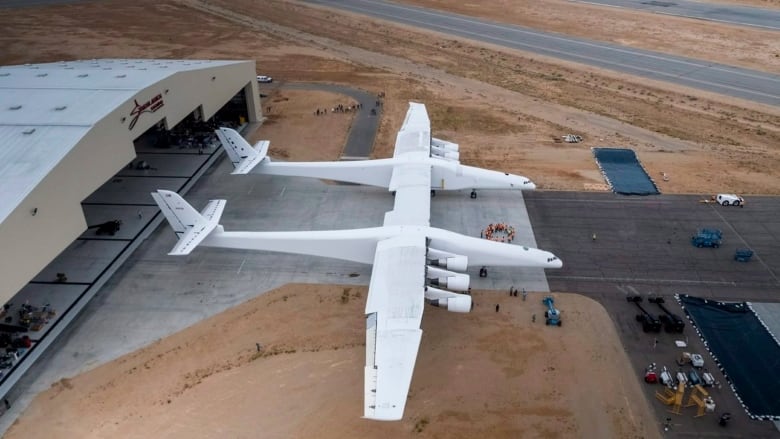 The previous wingspan leader was Howard Hughes’ World War II-era eight-engine H-4 Hercules flying boat — nicknamed the Spruce Goose. Surviving in an aviation museum, it has an approximately 97.5-metre wingspan but is just under 67 metres long.

While Stratolaunch calls its aircraft the world’s largest, other airplanes exceed it in length from nose to tail. They include the six-engine Antonov AN 225 cargo plane, which is 84 metres long, and the Boeing 747-8, which is just over 76.3 metres long.