The world’s biggest carbon-sucking machine, billed as a tool to reduce climate change, has been switched on in Iceland.

Called Orca, it will capture 4,000 metric tons of carbon dioxide (CO2) per year as part of efforts to reduce levels of the greenhouse gas in the atmosphere – equivalent to the annual emissions from about 790 cars.

However, this total is a mere fraction of global CO2 emissions, which totalled 34.7 billion tons last year, according to the International Energy Agency.

Orca consists of a stack of metal ‘air scrubbers’ that suck in CO2 from surrounding ambient air using fans, before extracting it using a chemical filter.

The CO2 is then stored underground, reducing the amount of the greenhouse gas that reaches the atmosphere.

The gas can be permanently stored in deep geological formations, or used to make fuels, chemicals, building materials and other products. 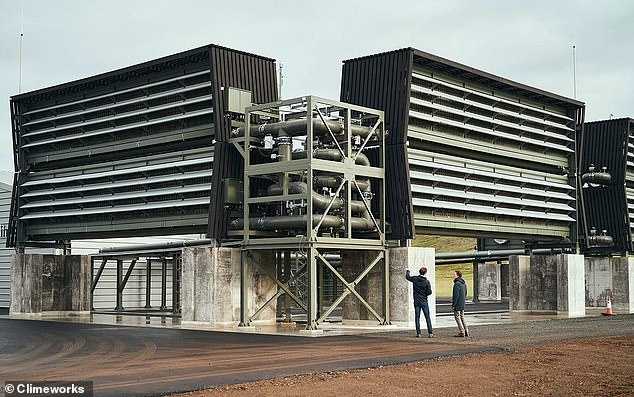 The other side, meanwhile, releases the clean CO2-free air. The CO2 is stored within the collector units, ready to be treated

Giant fans draw ambient air into contact with an aqueous solution that picks out and traps carbon dioxide.

Through heating and a handful of familiar chemical reactions, that same carbon dioxide is re-extracted and ready for further use -as a carbon source for making valuable chemicals like fuels, or for storage via a sequestration strategy of choice.

The resulting fuels, including gasoline, diesel, and jet fuel, are compatible with existing fuel distribution and transportation infrastructure.

‘Orca, as a milestone in the direct air capture industry, has provided a scalable, flexible and replicable blueprint for Climeworks’ future expansion,’ said Jan Wurzbacher, co-CEO and co-founder of Climeworks.

‘Achieving global net-zero emissions is still a long way to go, but with Orca, we believe that Climeworks has taken one significant step closer to achieving that goal.’

Wurzbacher told Bloomberg that Orca cost somewhere between $10 million and $15 million (7.2 million and £10.8 million) to build, including construction, site development and storage.

‘The cost per ton of Orca is perhaps less important than what we will learn, to get quicker to the large scale and ultimately lower prices,’ he said.

Climeworks commissioned the opening of the the world’s first commercial-scale DAC plant in its home country of Switzerland back in 2017, based on working prototypes from labs at research university ETH Zurich.

Iceland has also previously used the technology, but Orca at Hellisheidi is the largest DAC device yet.

Its stark design is meant to embody an ‘interconnection between nature and technology’ in the Icelandic landscape, according to Climeworks.

Orca, which started construction in May last year, is formed of eight large ‘powerful and compact’ container-size collector units, stacked in twos. Each of these double stacks is more than 20 feet long.

These collector units capture CO2 by drawing in air using a fan. Inside the collectors is the chemical filter material that collects CO2, while letting the air flow out the other side. 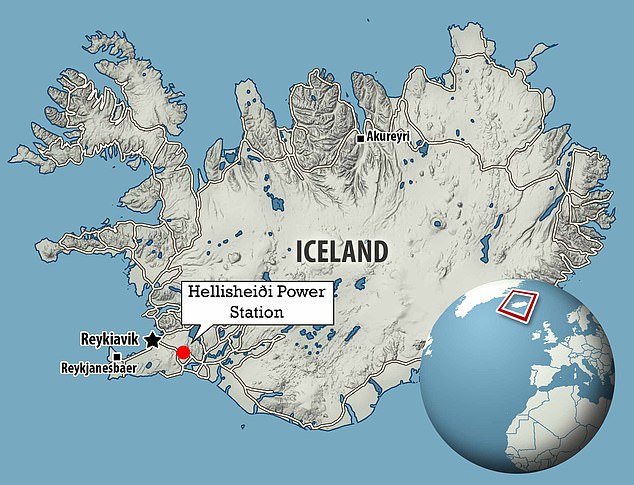 The machine launched on Wednesday at the Hellisheiði Power Station, Iceland, which is south-east of the country’s capital Reykjavík 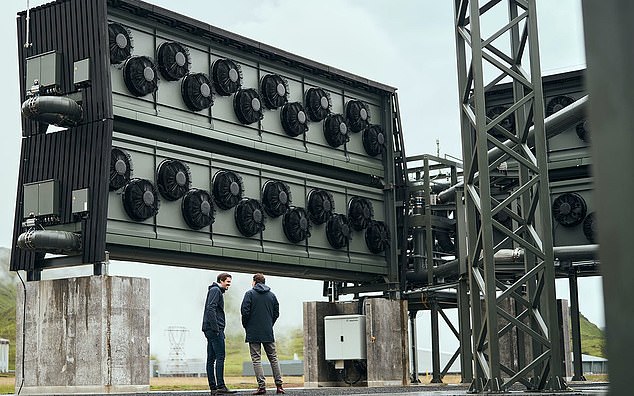 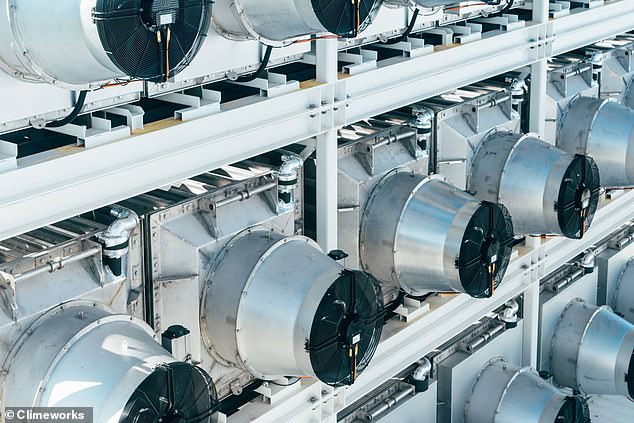 Orca will capture 4,000 metric tons of CO2 per year as part of efforts to reduce levels of the greenhouse gas in the atmosphere

Once this filter is saturated with CO2, the collector is closed so no more air can get in.

Next, the inside of the collector – and the captured CO2 – is heated up using power from the Hellisheiði geothermal power plant. This releases CO2 from the filter and extracts it in a concentrated form.

Another company, Carbfix, then mixes the CO2 with water and pumps it deep underground.

Climeworks explains: ‘Through natural mineralisation, the CO2 reacts with the basalt rock and turns into stone within a few years.

‘The CO2 is thus removed from the air and returned to Earth permanently and safely.’ 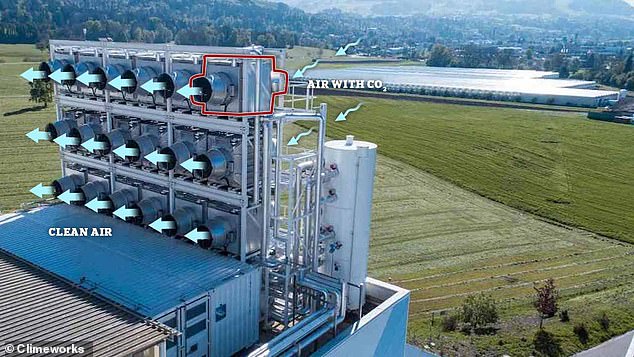 Pictured is a Climeworks carbon sucking plant in Switzerland. DAC grids like this one are made up of individual, stackable filters known as ‘collectors’ 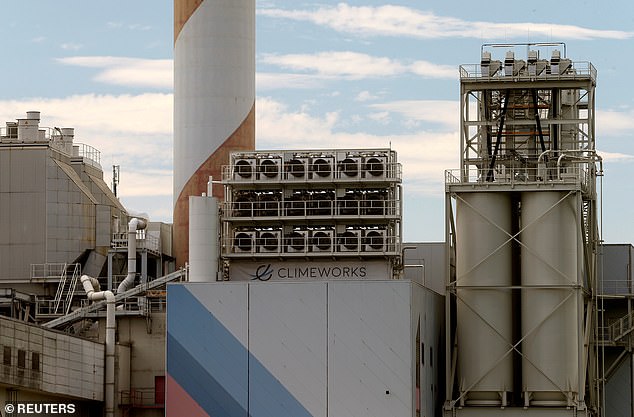 A facility for capturing CO2 from air of Swiss Climeworks AG is placed on the roof of a waste incinerating plant in Hinwil, Switzerland July 18, 2017

Climeworks said the technology can easily be replicated at different locations worldwide and on ever larger scales, to scale up the amount of CO2 being captured.

The company stressed the importance of climate capture following ‘unprecedented extreme weather events’ that have dominated the news headlines this year.

It referred to the recent UN climate panel report – dubbed ‘a code red for humanity’ – which said global warming had caused an unparalleled melting of glaciers and was close to spiralling out of control.

‘The report further confirms that it is crucial to reduce our emissions drastically and remove unavoidable and historic carbon dioxide emissions from the air permanently,’ said Climeworks.

– It is ‘unequivocal’ that human activity has warmed the atmosphere, ocean and land – with widespread and rapid changes across the world.

– Many of the changes are unprecedented over many centuries to many thousands of years, with the world warming at a rate unprecedented in at least 2,000 years.

– Global average temperatures were nearly 2F (1.1C) higher in the last decade than in pre-industrial times, or the period 1850-1900, driven by emissions caused by human activities such as burning fossil fuels and deforestation.

– Human-caused climate change is already affecting many weather and climate extremes in every region around the world, with stronger evidence of more frequent or intense heatwaves, heavy rain, droughts and tropical cyclones and the role humans play in driving the changes.

– Humans are very likely the main driver of the global retreat of glaciers, decline in sea ice, warming oceans and rising sea levels. The rate of sea level rise is speeding up.

– Global surface temperatures will continue to increase until at least mid-century, and the world will reach or exceed 1.5C of warming over the next 20 years.

– Global warming of 2.7F and 3.6 F (1.5C and 2C) – limits countries have committed to in order to avoid the most dangerous impacts of climate change – will be exceeded in the 21st century unless deep reductions in carbon dioxide and other greenhouse gas emissions occur in the coming decades.

– Continued warming will drive increases in the frequency and intensity of hot extremes, marine heatwaves, heavy rain, droughts in some regions, the proportion of intense tropical cyclones, and reductions in Arctic sea ice, snow cover and permafrost.

– Every additional increment of warming causes larger changes in extremes, with every extra 0.5C temperature rises leading to clear increases in the intensity of heatwaves, heavy rain that can cause flooding, and droughts.

– Under scenarios for the future with increasing carbon dioxide emissions, the ocean and land carbon sinks such as forests are projected to be less effective at slowing the accumulation of the greenhouse gas in the atmosphere.

– Changes to oceans, sea levels and melting permafrost and glaciers are irreversible for decades, centuries or even millennia as a result of past and future warming.

– Strong, rapid and sustained reductions in emissions of methane would help curb warming, and would also improve air quality