The World Snooker Championship is interrupted by a PIGEON during Friday’s second round fixtures at the Crucible, with players and spectators left in stitches as the bird lands on a table before flying away

The World Snooker Championship was incredibly brought to a halt by a pigeon on Friday by finding its way into Sheffield’s Crucible Theatre and landing on a table.

The hilarious moment occurred during second-round fixtures in the auditorium, where Mark Selby was taking on Yan Bingtao and Zhao Xintong was competing against Stephen Maguire.

Bingtao flinched slightly as the pigeon first flew down into the Crucible, before it perched itself on the edge of the table.

Commentator Rob Walker then said: ‘We have seen some things at the Crucible before but we have never seen that. Well I never.

‘How on earth are they going to get it out?’

The bird then took a casual stroll down the table and flew away, drawing a mixture of laughs and cheers from the crowd.

After waiting for the green light, Bingtao and Selby – who both appeared taken aback by the bizarre incident – then resumed play in their second-round match. 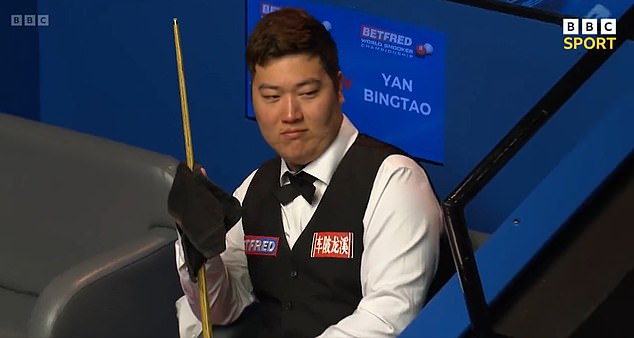 ? There is a pigeon on the snooker table ?

You read that right. Think it wants a game.#BBCSnooker

Staff at the Crucible eventually got the situation under control and got the pigeon out of the arena before taking it through the player’s entrance.

Fans were clearly amused by the pigeon interruption, taking to social media to make light of the situation.

One wrote: ‘You could call that a bird’s eye view…I’ll get me coat.’

Another quipped: ‘I heard there was a prize for the highest beak’. 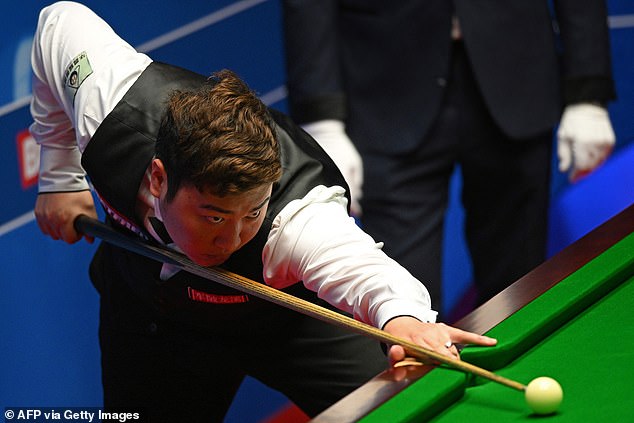 You could call that a bird’s eye view…I’ll get me coat.

Going for the Coo ball.

This is why the snooker has to stay in Sheffield!

A third put: ‘Going for the Coo ball.’

While another insisted: ‘This is why the snooker has to stay in Sheffield!’

After play got back up and running, Bingtao stormed into a 4-2 lead in his second-round clash with Selby.

Meanwhile, Maguire is currently leading Xintong 11-5 in the other second-round fixture.