Anthony Albanese was forced to wear a bright blue badge at the world leaders’ summit in Tokyo just in case no one recognised him.

He was noticeably the only leader sporting the colourful accessory.

ABC’s Stephen Dziedzic reported that the badge is a Japan government ‘seal which denotes his seniority as a Prime Minister – just in case somebody at the venue doesn’t recognise him’.

He added that this ‘is obviously not a problem for Modi, Biden or Kishida’.

‘The imperial seat of Japan is know as the Chrysanthemum throne. It is in keeping with Japanese politeness.

‘They are ensuring that no one is embarrassed by a failure to recognise Anthony’s status.’

While other leaders may have been left red faced wearing the badge, Mr Albanese appeared unbothered – after all it was only his second day in office.

He was sworn in on Monday morning following his election win on Saturday before jumping on a jet headed for Tokyo.

Mr Albanese used his second day in office to signal Australia’s ambitions on cutting emissions and reinforce its commitment to a free and open Indo-Pacific region.

He met with Mr Biden, Mr Kishida and Mr Modi on Tuesday for the second in-person Quad leaders’ meeting, where discussions included countering China’s increasing assertiveness in the region.

‘The Solomons was discussed in the meeting, including the issue in which China is seeking to exert more influence in the Pacific,’ he told reporters in Tokyo after the meeting.

‘We know that’s the case. Australia is responding to that, along with the US.’ 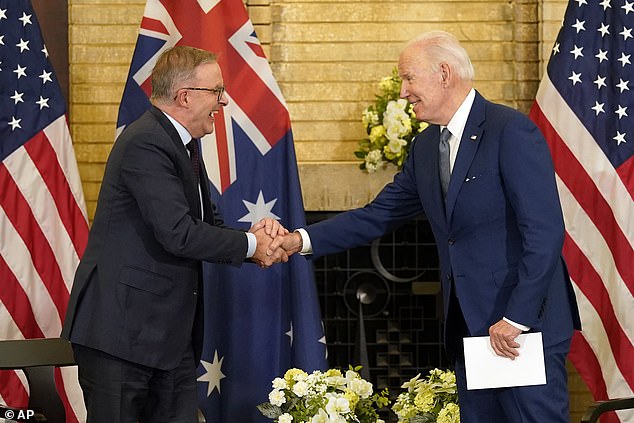 He also sought to differentiate from his predecessor Scott Morrison on climate action, citing his government’s target of reducing emissions by 43 per cent by 2030.

‘We know that China is seeking to exert more influence in the Pacific and we know that climate change is such an important issue,’ he said.

Speaking before the meeting, Mr Biden said the Quad partnership was about democracy against autocracy. 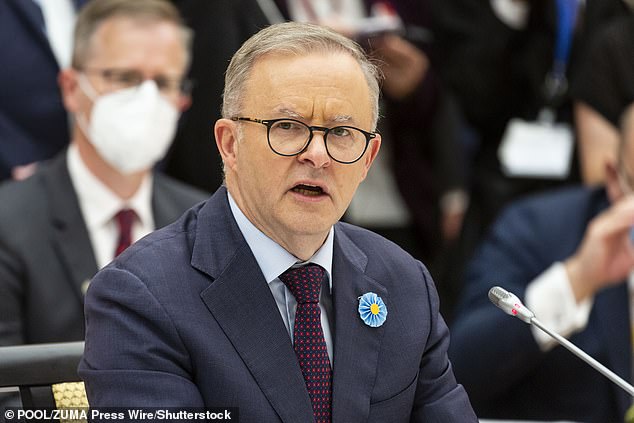 Australian Prime Minister Anthony Albanese is pictured with his prominent bright blue badge at the Quad leaders’ summit on May 24, 2022 in Tokyo, Japan. The badge is a chrysanthemum, and is designed to mark him out as an important person, in case he is not recognised

‘We’re navigating a dark hour in our shared history. The Russian brutal war against Ukraine has triggered a humanitarian catastrophe,’ he said.

‘The fundamental principles of international order, territorial integrity and sovereignty, international law, human rights, must always be defended, regardless where they’re violated in the world.’

Mr Kishida also expressed dismay at the war in eastern Europe, saying the invasion of Ukraine was ‘a grave incident which has fundamentally shaken the rule of law’.

‘We cannot let the same thing happen in the Indo-Pacific region,’ he said.