Scientists have debunked a popular theory of how the woodpecker can repeatedly hit its beak against a tree at high speed without doing itself brain damage.

They found their skulls don’t act like shock-absorbing helmets as previously thought, but more like stiff metal hammers.

In fact, their calculations show that any shock absorbance would hinder the woodpeckers’ pecking abilities.

Woodpeckers rapidly drill into trees to extract insects deep within the wood with their long tongues. 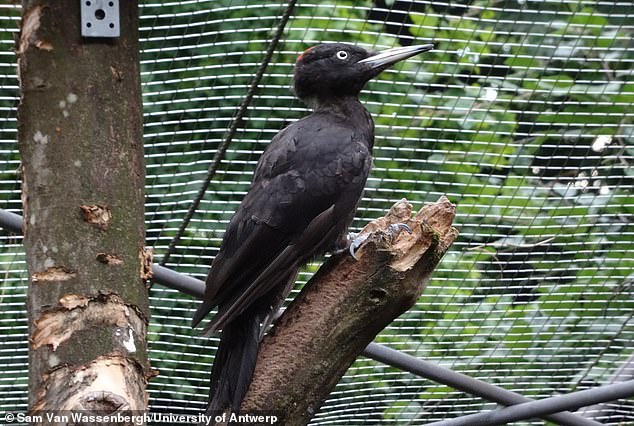 Photo of a black woodpecker (Dryocopus martius) that was filmed in the study at Alpenzoo Innbruck, Austria

Scientists had long wondered how woodpeckers can repeatedly pound their beaks against tree trunks without harming their brains.

This led to the notion that their skulls must act like shock-absorbing helmets.

But the researchers have refuted this notion, saying that their heads act more like stiff hammers.

Even though their skulls don’t act as shock absorbers, the furious pecking does not put their brains at risk, the researchers have said.

‘By analysing high-speed videos of three species of woodpeckers, we found that woodpeckers do not absorb the shock of the impact with the tree,’ said study author Sam Van Wassenbergh at the University of Antwerp, Belgium.

When a moving head strikes a stationary object, the sudden deceleration of the head (an ‘impact deceleration’) will cause compressions at the impact site of the brain and expansions at the back side, which can damage neurons and cause dysfunction.

Woodpeckers have a spongy bone in their skull, just in front of their beak, that has previously been identified as a shock absorber.

Engineers of shock-absorbing materials and tools, such as helmets, have even used the morphology of woodpeckers as a source of inspiration.

However, the shock absorber theory is ‘controversial’, Van Wassenbergh and his colleagues say, because of an ‘apparent paradox of absorbing the shock the woodpecker wants to impart on the tree’.

‘If the beak absorbed much of its own impact the unfortunate bird would have to pound even harder,’ they say in their paper.

‘Consequently, as a strong selective pressure has probably improved hammering performance through the evolution of woodpeckers, how can a trait that reduces this performance have evolved as well?’

The well-developed zone of spongy bone at the frontal region of the skull, which is hypothesized to absorb shocks, is highlighted in green

Van Wassenbergh and colleagues looked at impact decelerations during pecking in the three woodpecker species, by filming them and watching the footage back.

They used the data to build biomechanical models, which led them to a conclusion that any shock absorbance of the skull would be disadvantageous for them.

Also, even though their skulls don’t act as shock absorbers, the furious pecking does not put their brains at risk, the researchers say.

While the deceleration shock with each peck exceeds the known threshold for a concussion in monkeys and humans, the woodpeckers’ smaller brains can withstand it, they claim.

Van Wassenbergh said woodpeckers could risk brain damage if they were to peck on metal at full power.

But their usual pecking on tree trunks is generally well below the threshold to cause a concussion, even without their skulls acting as protective helmets.

This contrasts the findings of a 2018 study, which found woodpecker brains show high-levels of an Alzheimer-causing protein called tau, associated with neurodegenerative illnesses such as dementia. 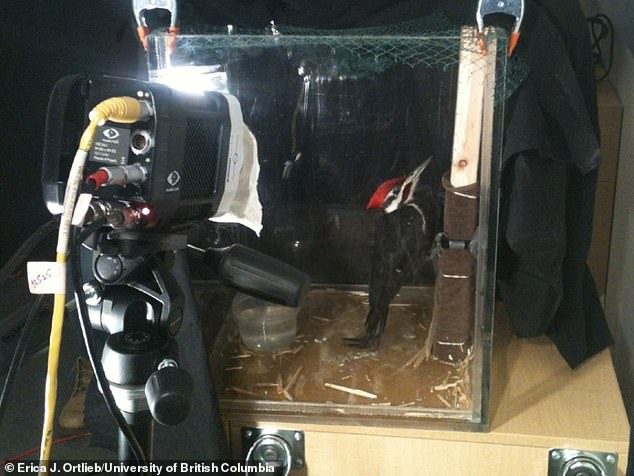 According to Van Wassenbergh, the absence of shock absorption does not mean their brains are in danger during the ‘seemingly violent impacts’.

‘Even the strongest shocks from the over 100 pecks that were analysed should still be safe for the woodpeckers’ brains as our calculations showed brain loadings that are lower than that of humans suffering a concussion,’ he said.

The findings refute the long-held theory of shock absorption, which has been popularized in the media, books, zoos and more.

‘While filming the woodpeckers in zoos, I have witnessed parents explaining to their kids that woodpeckers don’t get headaches because they have shock absorber built into their head,’ he said.

‘This myth of shock absorption in woodpeckers is now busted by our findings.’

The new study has been published today in the journal Current Biology.