Two fast food shops are engaged in a bitter dispute in what some locals are calling ‘the fish and chip wars’ as the businesses clash over a single word in their names.

The two shops, located in the outer Perth suburb of Cooloongup, both have the word Woodbridge in their name – with Woodbridge Deli filing an application on July 19 this year to trademark Woodbridge Deli Fish and Chips.

Four years ago, the almost identically named Woodbridge Fish and Chips was taken over by local mum Anny Liu and since then, the shop has become a hit with locals.

Due to the name similarity to Woodbridge Deli’s fish and chip shop next door, Ms Liu said she decided to slightly alter the name of her restaurant to Woodbridge Emily’s Fish and Chips, after her daughter.

Woodbridge Deli Fish and Chips has been around for more than 15 years and is located next to Emily’s, with both at the front of the Woodbridge shopping complex. 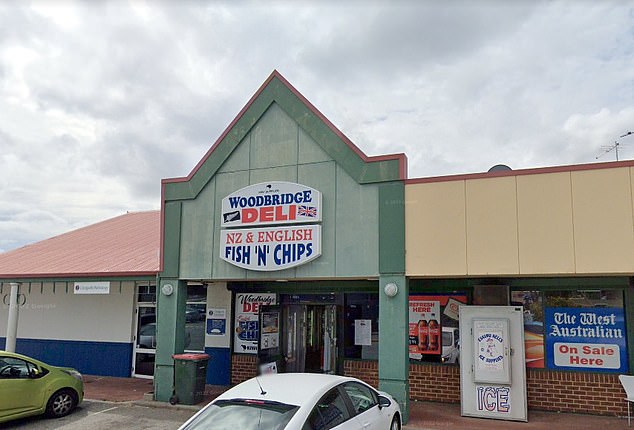 However in a twist that has now forced Ms Liu to involve lawyers, Woodbridge Deli Fish and Chips announced in July it was moving to trademark its name.

The similarities of the two names has left Ms Liu in legal limbo with lawyers for the neighbouring business sending a cease and desist letter to her on September 15. 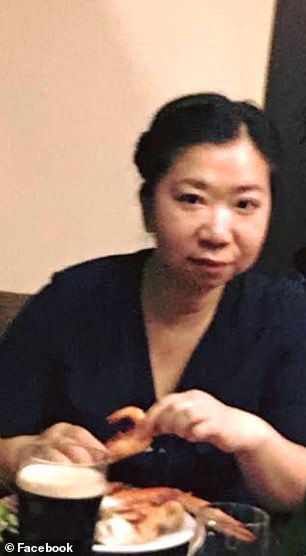 The deli’s application to trademark its shop name led to Ms Liu starting a GoFundMe to raise funds for a legal challenge.

‘I only found out (about the trademark) when their lawyer sent me a letter of infringement,’ Ms Liu said.

‘They purposely registered “Woodbridge Fish and Chips” in July as their trading name.

‘If they believe having the name Woodbridge will increase their trade, we are happy to remove the location name in front of our business name. But we will not compensate on their loss of trades or loss of goodwill.’

While both Woodbridge Deli and Emily’s are popular spots for locals to get their fried food fix, Emily’s appears to be slightly more popular with 276 reviewers giving the restaurant an average 4.7 stars on Google. 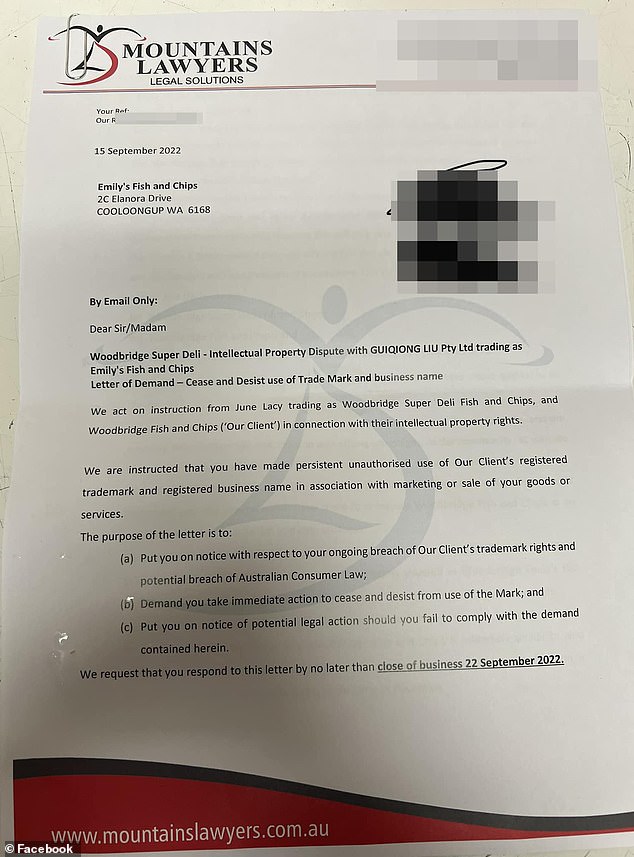 On their Woodbridge Deli Fish and Chips website, the business claims to be the ‘original Woodbridge fish and chips’.

‘We’re a family-owned restaurant and have been established for over 15 years. Think about your grandma’s best recipe that she says she spent years perfecting. These are the kinds of flavours you can expect from our food.’

According to a Western Australian patent and trade mark attorney, there are two ways to get trademark rights.

One is through registration and the other is through unregistered trademark rights, which relates to reputation and goodwill.

However, a letter, any legal claim or a cease and desist letter is not legal for an unregistered trade mark and therefore would only be allowed in the case of a legally registered trademark.

‘What is clear is if they only have a pending application they don’t have any registered trademark, and therefore an unjustified threat could actually be turned against them.

‘There are provisions in place where unjust threats of a trademark infringement can cause legal proceedings against them and if there is a pending trademark they have no grounds and they cannot threaten the other business.’

The trademark lawyer suggested Mountains Lawyers filing a legal letter could land itself in some hot water.

The 1995 trademark act under ‘groundless threats of legal proceedings’ states, ‘If a person threatens to bring an action against another person (threatened person) on the ground that the threatened person has infringed: a registered trade mark; or a trade mark alleged by the person to be registered; any person aggrieved by the threat (plaintiff) may bring an action (either in a prescribed court or in any other court having jurisdiction) against the person making the threat (defendant).’

Ms Liu said she hoped the matter would be settled soon.

‘We are happy to remove Woodbridge from Google and Facebook once this matter is settled,’ she said.

‘Woodbridge is the name of the complex where our shop is located. Even though our shop had a similar name before we changed to Emily’s Fish and Chips, I don’t see any reason why we have to fight for what my neighbour is so eager to have. 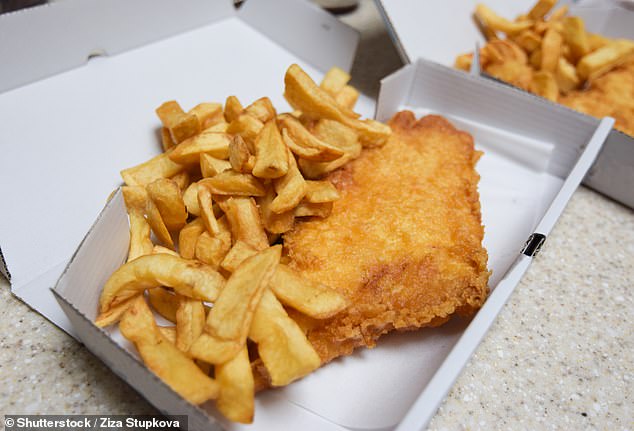 Tony Sandy, one of the GoFundMe’s donors, said: ‘Victorious warriors win first and then go to war, while defeated warriors go to war first and then seek to win. Sun Tzu. You won first through excellent food, hard work and great customer service, you’ve got this!!!’ 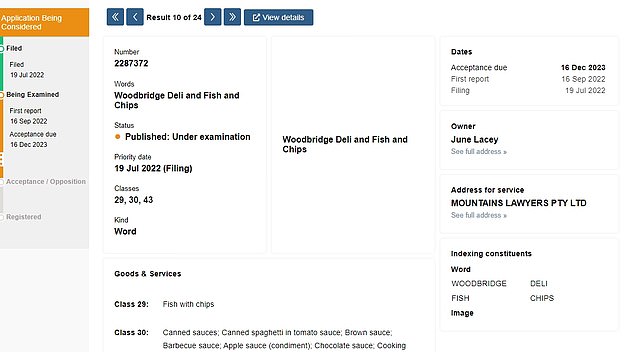 On July 19, 2022, owner of Woodbridge Super Deli June Lacey engaged the legal services of Mountains Lawyers Legal Solutions to attempt to trademark the words, ‘Woodbridge Deli and Fish and Chips’

The trademark application has been filed and is being reviewed with a decision yet to be made.

Once a trademark application is filed, it takes at least seven months to become registered, allowing time for opposition and for all the checks and balances to be met.

Woodbridge Super Deli and Mountains Lawyers Legal Solutions have been contacted for comment. 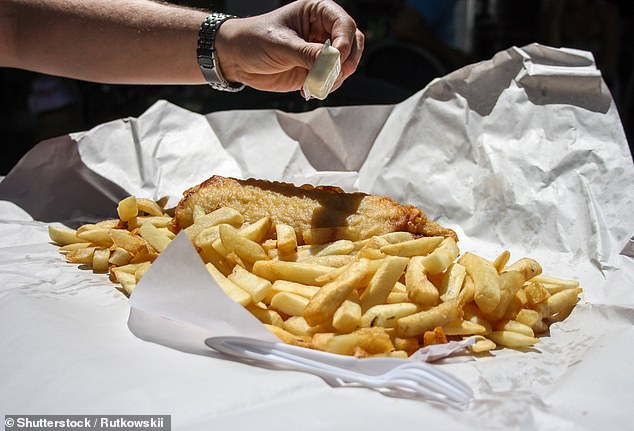