Driver furious after traffic camera snapped a photo of his wife’s underwear – and sent them a $1,078 seatbelt fine because she reached over to adjust the car’s sun visor

A driver hit with a $1,078 fine because his wife momentarily reached over and adjusted her sun visor has also complained the traffic camera snapped a photo of her underwear.

Anh Nyugen was in the passenger seat while her partner Richard Arnold was driving when she pulled the sun visor down and her arm slipped out of the seatbelt.

Mr Arnold, as the driver, was shocked when he got sent a fine, but the couple was even more distressed – and is demanding an apology – for the ‘indecent photograph’ up Ms Nyugen’s skirt.

He got set two photos taken by a fixed cameras on the M1 in Coomera, Gold Coast, at 5.21pm on December 19.

A Queensland couple is furious after being fined $1,078 for the passenger (pictured) adjusting the sun visor after her arm had slipped out of the seatbelt 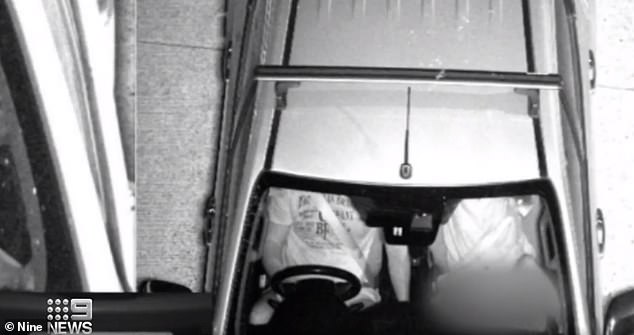 The traffic camera also snapped a photo of her Anh Nyugen’s underwear (pictured, blurred on the right)

Ms Nyugen, who is a petite 152cm tall, had a foot up on the Mitsubishi Triton ute’s dashboard at the time the photo was taken.

Mr Arnold, who is a retired aviation worker on a fixed income, was stunned to get such a large fine over the incident he said lasted no more than two or three seconds.

‘I don’t think it’s reasonable,’ he told the Courier Mail. ‘If you’re driving your car you can’t be checking your passengers all the time to see if their seatbelt is correctly adjusted.’

He also wants the Queensland government to say sorry for the intrusive photograph.

‘You don’t expect to be sent pictures of your wife’s underwear, I have to say,’ he said.

‘It’s actually illegal I think to photograph up a skirt. Covert photographic surveillance should not be used in such an insensitive and disrespectful manner.’

Mr Arnold is fighting the fine in court, despite fearing he may be hit with even more costs. 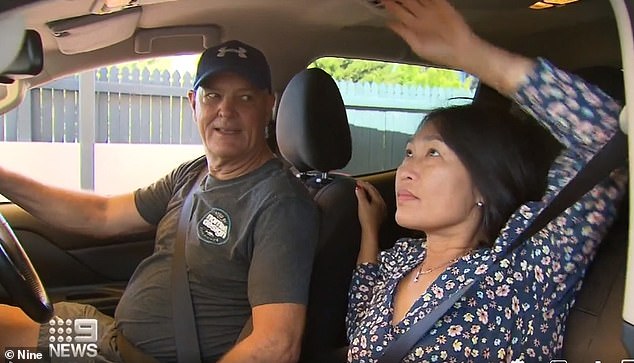 Mr Arnold (pictured left with his partner Anh Nyugen) is fighting the fine in court, despite fearing he may be hit with even more costs

He said being on a fixed income, the $1,078 fine is a very big amount to him, after being forced into early retirement due to the pandemic.

Queensland’s Department of Transport and Main Roads said photographs taken by traffic cameras are ‘securely encrypted and stored’ and used ‘only for enforcement purposes’.

When fines are issued, images are not altered before they are included on the infringement notice.

An average of 70 fines a day for seatbelt offences recorded on traffic cameras were issued in Queensland in the year to October 31, 2022.

Most of the fines were for seatbelt offences by passengers, not drivers.