This is the shocking moment a woman on a flight to Michigan appeared to have a meltdown in the air.

Video filmed by a fellow passenger shows the woman screaming as she climbs the seats – many of which are empty between rows of travelers.

The distressed passenger appears with her surgical face mask pulled down on her chin as she yells profanities at the top of her lungs and a cabin crew member asks her to take her seat but stands in shock after she’s ignored. 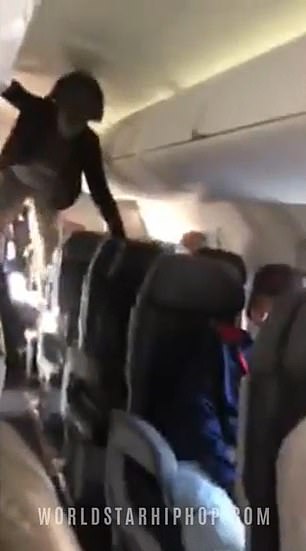 At one point, the woman wearing casual joggers and a jacket, clings onto the top of the overheard cabin bins containing hand luggage and shouts, ‘We’re going to f*** all night b***h,’ repeatedly.

She does not appear to be speaking to anyone in particular and she stands on the arm and neck rests to project her statements.

Throughout, the woman is seen using the tops of the overhead bins to gain leverage and thrust her hips forward.

At time she beats on the lockers, prompting the latches to come undone and the containers to open. Some items partially fall out.

At that point three men slowly move forward to usher her to the front, ‘Are you ready to go?’ one asks?

While she seems to calm initially, she begins to yell again as they move away from the camera and their actions are no longer clear.

She clings onto the top of the overheard cabin bins containing hand luggage and shouts, ‘We’re going to f*** all night b***h,’ repeatedly

It’s unclear if any fellow passengers were harmed during the apparent breakdown.

One passenger speaking from behind the camera speculated that the woman was under the influence of a drug.

Commenting that she was ‘fine’ about half an hour ago, the witness claimed she must have taken something in the bathroom.

The cabin crew member seen in the clip tells passengers she was trying to block her.

Some viewers of the video obtained by World Star Hip Hop compared the incident to an exorcism and joked that she was possessed by demons.

Information about the airline or other details were not provided. 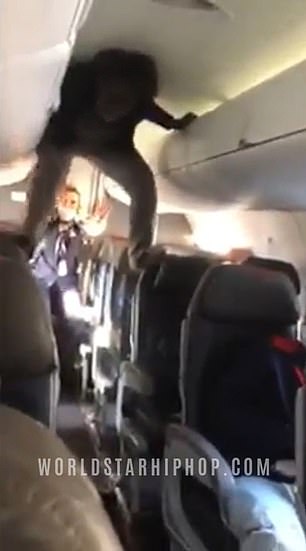 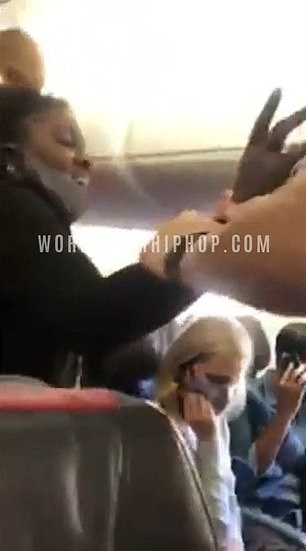