An Australian woman with tumours growing along her nerves had to learn to walk and talk again after the condition led to a rare brain cancer left her in a critical condition for months.

Emma Sinclair, from Forbes in NSW, was only meant to be in hospital recovering for 10 days after she had part of an aggressive tumour removed from her brain which was a result of her having a rare condition known as Neurofibromatosis or NF1.

The 34-year-old told FEMAIL she was ‘stubborn and determined’ to get back on her feet and regain some independence after the major surgery on her brain left her unable to walk, talk and use her dominant right hand.

At the age of just three, Emma received her NF1 diagnosis which has a range of symptoms including tumours growing in the brain, spinal cord and nerves.

‘(NF1) is when tumours grow on all your nerves and I’m lucky enough to be covered in them. They’re all on the inside so you can’t really tell I have it by looking me,’ she explained.

She said the NF1 didn’t affect her too much in her early childhood and teens but she had some learning difficulties and was never good at sport because of her ‘low muscle tone’.

Emma had her first of what would be 13 surgeries to remove a tumour when she was in Year 11. She would go on to have another 12 operations.

In 2020, doctors told her they found a unique form of cancer in her brain that is made up of two parts, one being at stage one and the other at stage three but she didn’t have much time to process the life-altering news.

‘I didn’t have much time to get used to it. I found out and the next day had surgery,’ Emma said. 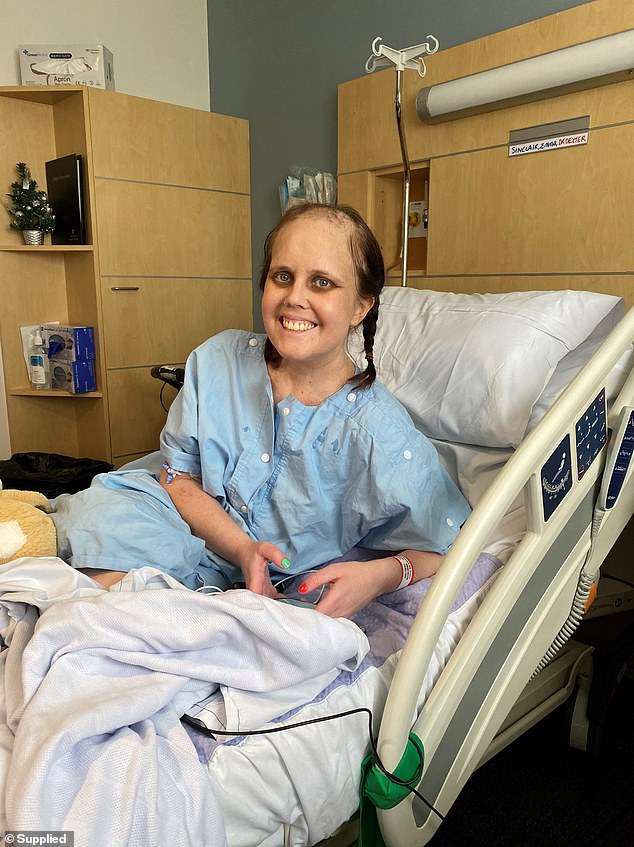 Surgeons were able to extract the stage one section but could not remove the more aggressive part.

Emma was meant to be in recovery from the major surgery for a little over a week but remained in hospital for 106 days and lost the ability to walk, talk and use her right hand.

‘I was lucky not to really remember much of that time,’ Emma said.

‘I had lots of infections in the brain and stomach, then I had to have a shunt put in brain although we tried to avoid it.’ 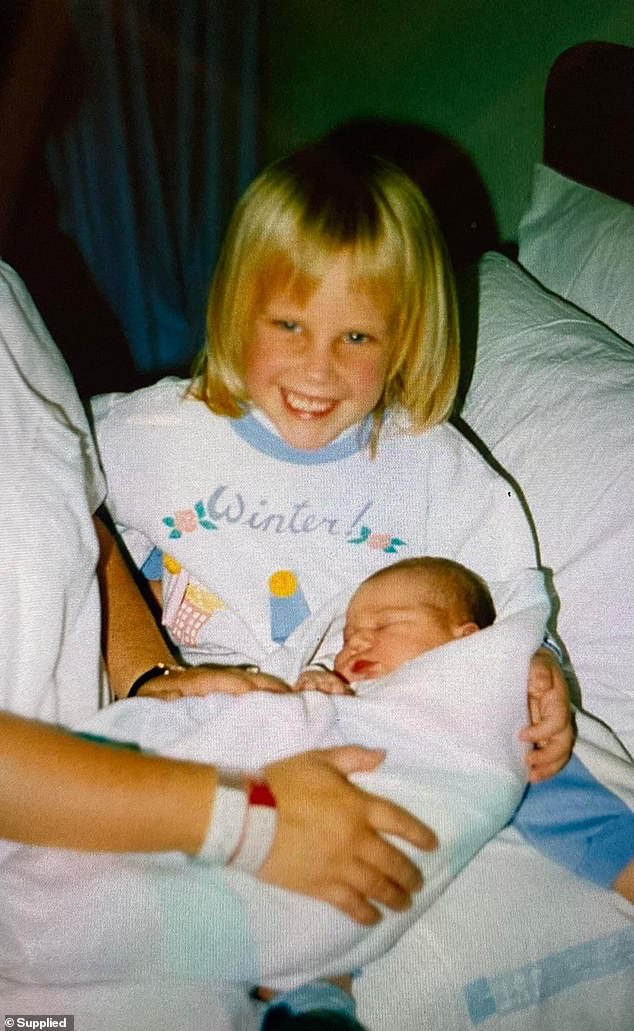 Emma received her NF1 diagnosis at three-years-old. She said it didn’t affect her much in her childhood but had her first surgery out of 13 to remove a tumour when she was aged 16

The shunt, which is tube that has to be surgically inserted to help drain fluid from the brain, did not work properly and Emma had to get a second put in.

‘Lots of stuff went wrong. My surgeon did not know what was causing it. It caused him a lot of stress,’ she said.

After more than 90 days in ICU, Emma was moved to a rehabilitation facility where she started to relearn how to walk and talk then was finally allowed home.

‘I have so much respect for children now because gosh it’s hard,’ she laughed.

Emma was given a walking frame which she was told she would need to use for the rest of her life.

‘I didn’t like it at first. You don’t see young people using them, you only see a lot of older people using it but I was stubborn and determined, mostly stubborn,’ she said.

‘Every day I did little walks. It was only to end of the street which was not even 100metres but I was determined to push past it and now I can walk over a kilometre in one go.’

Despite getting back on her feet, Emma’s ordeal was far from over. 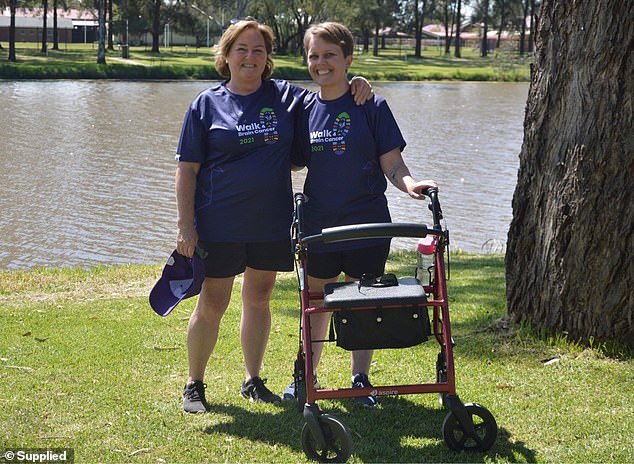 Because surgeons could not remove the aggressive section of her brain tumour, she underwent 12 months of chemotherapy to slow its growth during which she finished her teaching degree.

Emma had just one unit left in the course when she got her brain cancer diagnosis and even though she knew she would never be able to work as a teacher, she wanted to graduate.

‘My focus isn’t as good anymore. It was never brilliant and it got even worse after the brain surgery but I was determined to finish,’ she said.

After Emma completed both her studies and the year-long bout of chemo, she received another blow – the tumour did not respond to the treatment and had doubled in size. 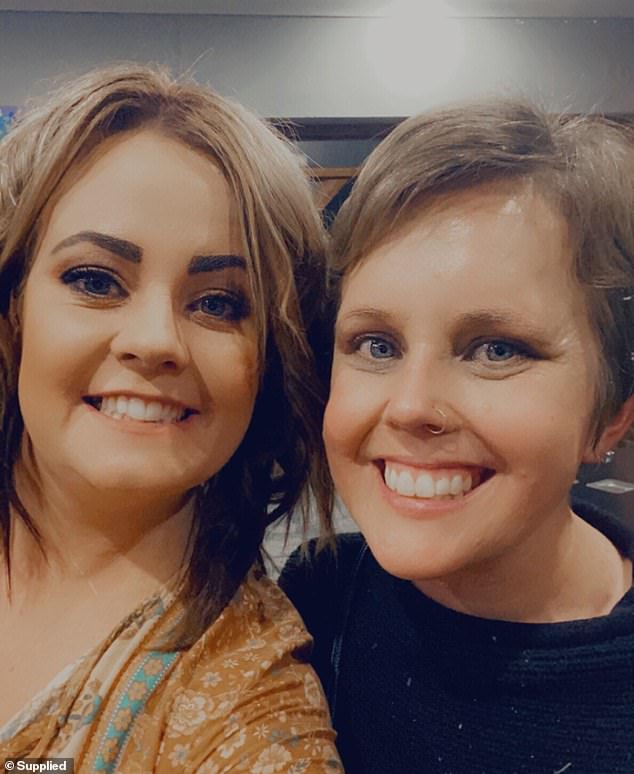 Emma may have to miss her university graduation but remains optimistic and refuses to let her illness ‘define’ her – a trait she attributes to her mum (pictured, right, with her best friend, Lane)

She is now travelling an hour and a half each way to a hospital in Orange to receive radiation treatment which she will have to do five days a week until Christmas.

Emma is disappointed to miss out on putting her walking skills to the test at the Children’s Tumour Foundation’s Conquer NF in Colour fun run which aims to raise vital funds to support those affected by the rare condition.

She also may have to miss her university graduation but remains optimistic and refuses to let her illness ‘define’ her – a trait she attributes to her mum.

‘She never lets things get in her way either so we never did. NF1 was never an excuse,’ Emma said.

‘It was always “you might have this but you can still do all these things” and I think that’s what I’ve adopted.’

To donate to the Children’s Tumour Foundation and support those living with Neurofibromatosis click here.

Neurofibromatosis (NF) is a set of three complex genetic conditions that cause tumours to form on nerve cells throughout the body, including the brain and spine.

NF can affect anyone regardless of age, ethnicity, gender or family history and causes tumours (known as neurofibromas) to grow around the body’s nerve cells, including the spine and brain, under the surface of the skin or deep in the body.

It is impossible to predict how mildly or severely someone with NF will be affected and roughly half of all cases arise in families with no history of NF.

Approximately 20 per cent of children with NF1 will develop an optic pathway glioma (brain tumour).

Around 50-80 per cent of children with NF1 will experience learning or behavioural difficulties.

Incidence of breast cancer increase significantly in women with NF1.

Anxiety, depression and social isolation is common amongst those living with NF, with the risk of suicide for people in their twenties being four times higher compared to the general population.