A woman who was sexually abused by a family friend has revealed how a 16th birthday bouquet he sent her helped to jail him nearly a decade later.

Jodie Canner, now 25, from Wirral, was 13 when her neighbour, Paul Britton, began abusing her.

She’d go to his home after school to be looked after by his family while her mum worked and regarded him as a father figure and someone she could trust.

As his abuse escalated he’d buy her gifts, including a bouquet of flowers for her 16th birthday, and when Jodie eventually broke down and told her mother about the abuse, they handed a photo she’d taken of the teenager with the flowers to the police as they built a case.

Jodie Canner, 25, (pictured) from Wirral, who was sexually abused by Paul Britton at the age of 13, is urging victims to report their abuser

As his abuse escalated he told her to keep it to themselves and he’d buy her gifts, including a bouquet for her 16th.

Her mum – who had no idea what was going on – took a photo of Jodie with it, but was confused when she saw the accompanying card which read: ‘Love from Paul,’ and not the rest of his family.

When Jodie came to realise what he’d done to her she tried to bury it but was plagued by her past and ended up hitting rock bottom.

Following a trial in January this year Paul Britton, now aged 56, of Norfolk, was found guilty of eight counts of sexual activity with a child under 16, four involving penetration. He was sentenced to nine years.

Jodie, who has waived her right to anonymity in a bid to encourage other victims of sexual abuse to report it told Femail: ‘I got so low I even contemplated ending my life but then I thought where would the justice be in that? When jury found him guilty I cried with relief. Afterwards I stood up in court and looking him in the eye I told him: ‘I will not let you rob me of having a life.’

Jodie was 12 when her parents split and her mum was juggling different jobs to keep a roof over their heads. 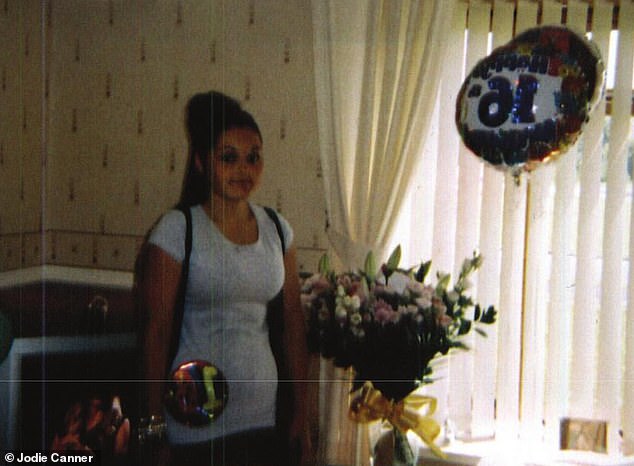 Jodie said she grew up without a dad at home and viewed her neighbor Paul as a father figure. Pictured: Jodie on her 16th birthday with the bouquet from Paul

She was grateful when their next door neighbours Paul Britton and his family said Jodie could go to theirs any time and they’d look after her.

Regarded as family friends, Jodie would often pop over there after school and play with their little ones until her Mum got home.

Said Jodie: ‘Mum was so thankful, she didn’t know what we’d have done without them and I was grateful too.

‘I felt like we’d gained a new family and I never thought twice about going there.’

Meanwhile every time she left Paul would give her a big hug.

‘He made me feel special and I looked up to him and with no Dad at home I regarded him as a father figure,’ she recalled.

One day Paul saw her to the door as usual and this time asked her to give him a kiss.

She said: ‘It was just a peck so I thought nothing of it and from then he’d always give me a kiss goodbye.’ 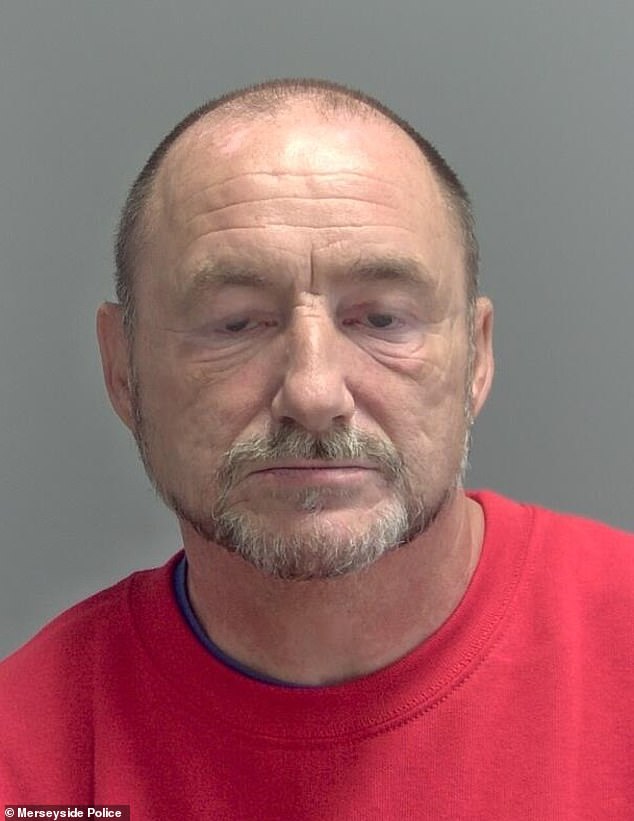 Jodie said she ignored when Paul stroked her chest while they talked about her scar in November 2007. Pictured: Paul Britton

Then in November 2007 she was at the Brittons’ when Paul touched the scar on the front of her neck.

‘He asked me how I got it and I told him I’d had open heart surgery when I was a baby.

‘He replied, ‘really?’, then his hand stroked me all the way down my chest.

‘I didn’t know how to react, so I ignored it and afterwards we carried on chatting.’

Soon after it was coming up to Christmas and Paul asked her to help him fetch the tree and fairy lights down from the loft.

But while they were stood on the top landing she says a strange look spread across Paul’s face:

‘He asked me if I was pure but I didn’t understand.

‘He then asked if I was a virgin, saying that for me to carry on coming to the house he’d need to check that I was pure. 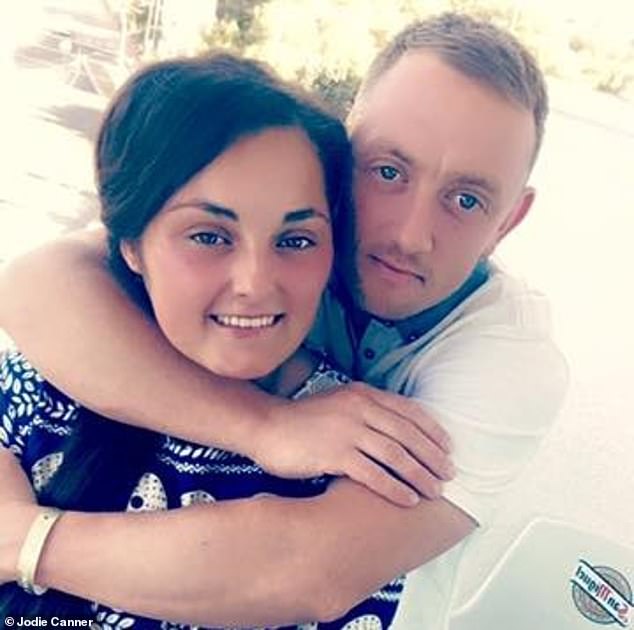 Jodie who once had to stay at the Brittons while her mother worked nights, said Paul told her he couldn’t wait until she turned 16. Pictured: Jodie Canner and her partner Ryan who has been an incredible support to her

‘I was an innocent 13-year-old and didn’t understand.

‘But next, Paul’s hand reached into my trousers, then my knickers as he penetrated me with his fingers.

‘Afterwards he smiled and said “you’re ok”, and carried on like nothing had happened.

‘But from then on he liked to check if I was pure, whenever his wife wasn’t around.’

One evening Jodie’s Mum had to work a late shift so she stayed over at the Brittons, sleeping on the sofa.

But as she was dozing off Paul came in and began stroking her hair.

Said Jodie: ‘He told me I was beautiful, then suddenly he climbed on top of me and began grinding his body over my nightclothes. As he did he said, “I can’t wait until you’re 16.”

‘My head was spinning, I’d no idea how to handle it, or what he was planning. I didn’t realise it was sexual abuse, Paul would always smile and act so casually.’ 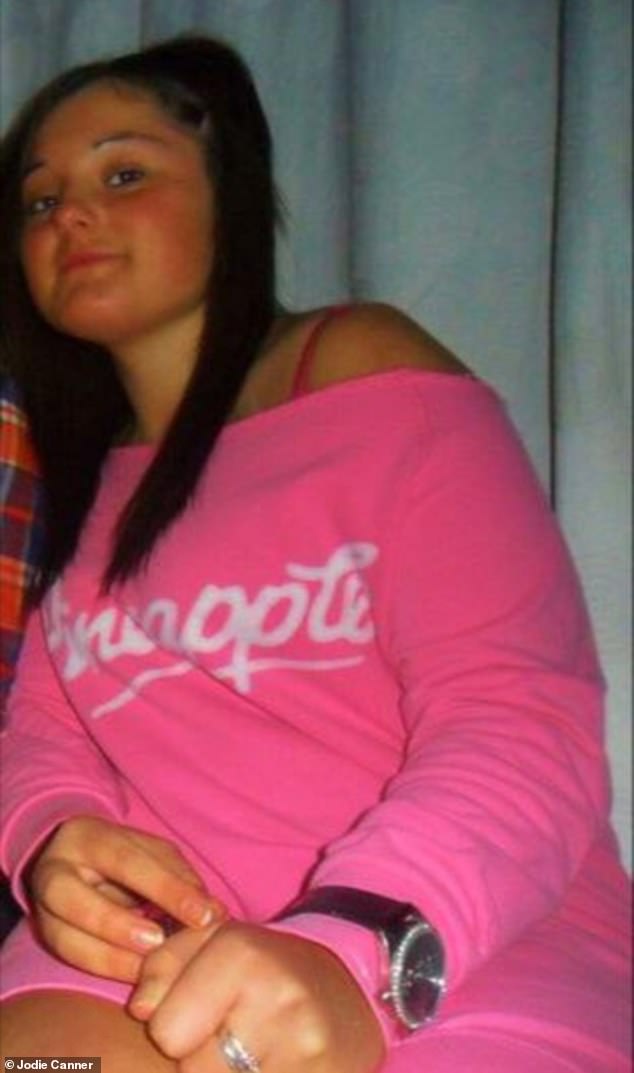 Jodie said Paul pretended she was his daughter, when booking her into a B&B two weeks before her 16th birthday. Pictured: Jodie during the time of the abuse

He’d also seek out any opportunity to abuse Jodie and he’d give her cash and gifts too.

Recalled Jodie: ‘He’d say to me, ‘keep this between us,’ but who could I tell? I didn’t even know what ‘this’ was. I couldn’t describe it. As time went by I even began to wonder if I was in love with Paul.’

Then around two weeks before her 16th birthday he said he had a surprise for her.

She said: ‘He told me to pack a bag and tell Mum that I was going to a friend’s. Then he picked me up from around the corner and drove me to Llandudno, in Wales.

‘He booked us into a B&B as father and daughter and when the receptionist asked if he’d rather have two rooms he quickly replied no, insisting that the family room would be fine.

‘But that night was worse than anything before, my fear and confusion was unbearable.’

Two weeks later on the morning of her 16th birthday a large bouquet arrived.

Jodie’s mum thought the flowers were lovely and she asked her who they were from. 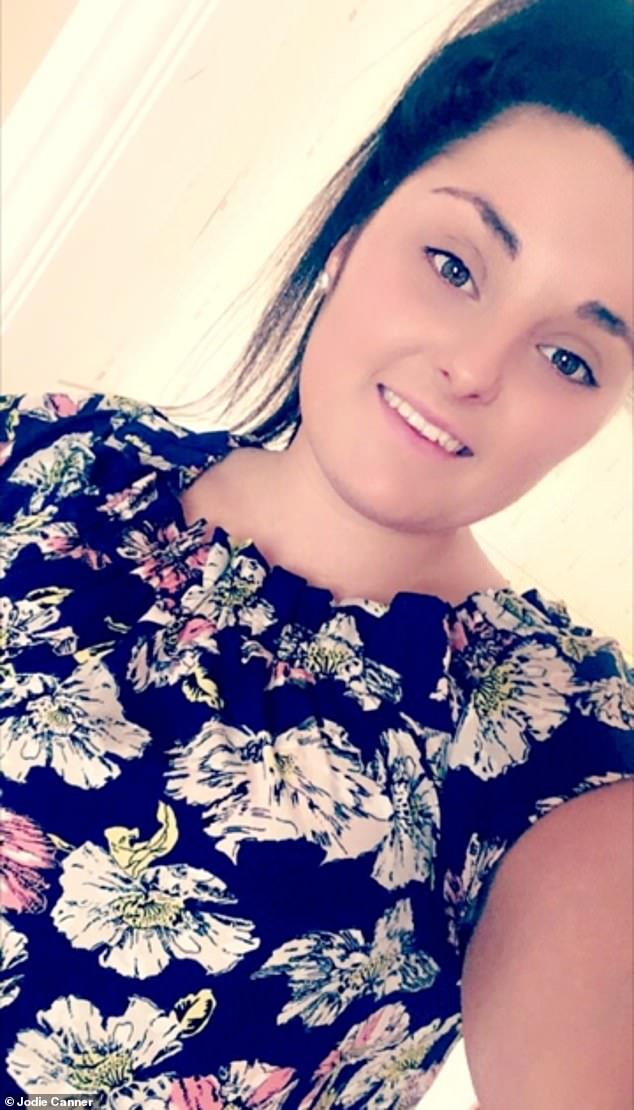 Then she read the card that came with them which read: ‘Happy 16th Birthday love from Paul.’

Said Jodie: ‘Mum was confused, she asked why they weren’t from the rest of family too, but I just shrugged.

‘Afterwards as she took a photo of me with the flowers I forced a smile. Then her attention was diverted elsewhere and that was it, but I was in turmoil.’

Then not long after Paul and his family moved away and Jodie didn’t hear from him.

‘I didn’t miss him. Instead I felt an overwhelming sense of freedom, now that I could go out and socialise with people my own age.

‘I ended up meeting someone and at 18 I fell pregnant with a little boy.

‘I vowed to be the best Mum to him, thinking I could bury my past with Paul.

‘Only I began to get flashbacks of hugs from Paul. Increasingly I’d see his face in my mind’s eye, smell the whiff of his aftershave… feel him like a dead weight on top of me.

‘As I played it all back in my mind, now older and wiser I knew it now for what it had been – grooming, mind games and sexual abuse. 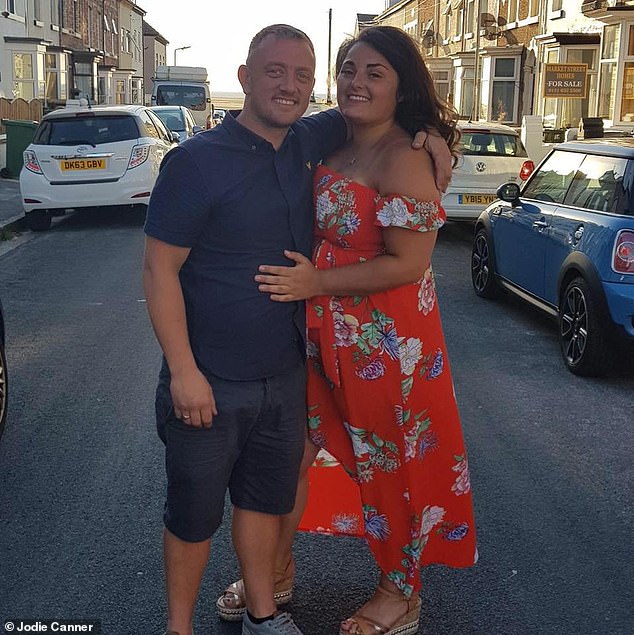 Jodie admits she held back on telling her current partner Ryan, 28, about the abuse she experienced. Pictured: Jodie and Ryan

‘I felt angry and stupid to ever think what he’d done was normal.’

As she struggled, Jodie’s relationship with her son’s dad broke down and she moved back in with her Mum, who remained in the dark.

A year or so later she met her current partner, Ryan, 28.

Said Jodie: ‘He was so patient and kind but at first I held back on telling him. But it built up like a volcano until one day I couldn’t hold it in any longer.

Ryan was horrified for me and when I mentioned about going to the police he said he’d support me whatever I decided.’

Plucking up courage Jodie rang them. Afterwards she knew, however hard it was, that the time had come for her to tell her Mum.

She said: ‘I was still living with her and as soon as she came back from shopping I seized the moment.

‘I need to talk to you,’ I told her. ‘I’ve called the police over something. She was confused and replied, ‘what about?’

‘And as she sat next to Ryan on the sofa I told her about Paul’s abuse. 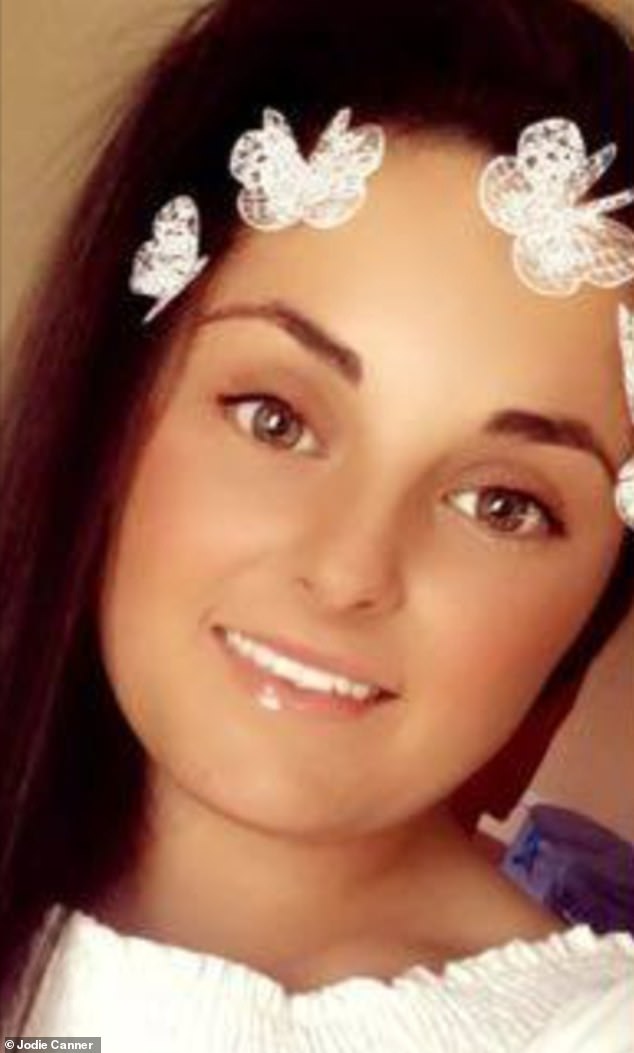 Jodie (pictured) said in the time leading up to Paul going to court for trial, she contemplated ending her life

‘Her hand flew to her mouth and I saw the colour drain from her face. ‘It’s all my fault!’ she said choking back tears. ‘No it’s not Mum, it’s Paul’s,’ I told her.’

Britton was arrested and charged with 11 counts of sexual activity with a child under the age of 16, some of which involved penetration.

But in court he denied everything, meaning it would now be Jodie’s word against his.

As the prosecution began to build the case her mum remembered something – the photo she’d taken of Jodie holding the flowers Paul had sent.

Said Jodie: ‘She found the picture of the bouquet and we handed it to the police. But leading up to the court case there were times when it almost got too much and I even contemplated ending my life.

‘I don’t know what I’d have done without Ryan, he was there for me day and night. He’d say to me,’ don’t let him win,’ and I knew he was right,’ she said.

By the time the trial started in January this year at Liverpool Crown Court Jodie was determined to see justice.

She gave her evidence from behind a screen and during the case the photo of the bouquet was also shown to the jury.

When they retired to consider their verdict Jodie says she panicked he’d get let off. 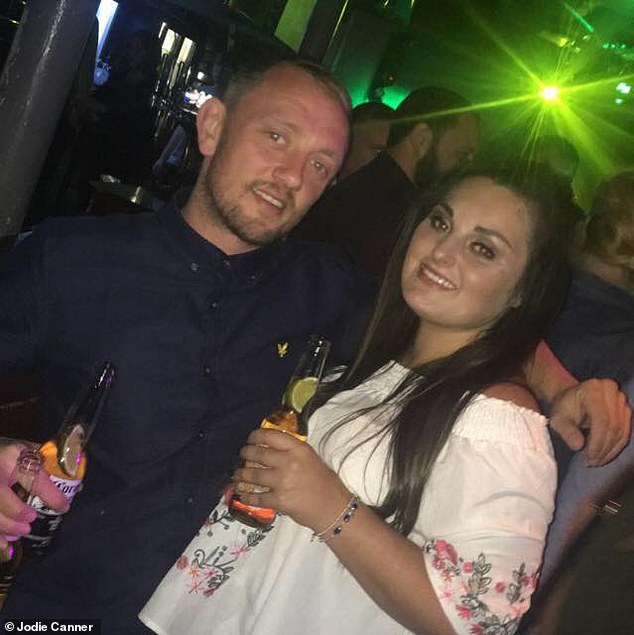 Jodie said knowing her abuser is behind bars for night years is like having a weight lifted. Pictured: Jodie and Ryan

But Paul Britton, now aged 56, was found guilty of 8 out of the 11 counts, 4 involving penetration.

Next day at the sentencing, Jodie refused a screen and instead faced him head on.

‘I said to him how he’d robbed me of my childhood and how I’d hit rock bottom. Then adamantly I told him: ‘But you won’t take my future.’

Said Jodie: ‘Afterwards as we stepped outside the court Ryan hugged me and told me how proud he was of me and Mum said how brave I’d been.

‘Knowing I was believed and that my abuser’s behind bars it’s like a weight’s lifted.

‘I still carry the mental scars but I meant what I said, I won’t let Paul ruin my future.

‘I also want to raise awareness of abuse and grooming. Paul manipulated me into thinking what he was doing was normal, while his gifts were all part of his control over me.

‘But he didn’t realise how a birthday bouquet would help to catch him out.’