A woman who was told by doctors told her to ‘lose weight’ to fix her chronic fatigue has revealed her illness was actually caused by a melon-sized cancerous tumour in her ovaries.

Hannah Catton, 24, from Faversham, Kent, visited a doctor after suffering from stomach bloating and repeated urinary infections, but was told she was ‘fine’ and it was probably stress related and that she should slim down.

The veterinary nurse moved to Melbourne, Australia  in 2019 before becoming increasingly concerned about her health.

She  undergoing life-saving chemotherapy in Australia and is unable to be joined by her family because of Covid travel restrictions.

Hannah Catton, 24, (pictured), who lives in Melbourne, was diagnosed with ovarian cancer after initially being told by doctors that her symptoms were stress-related

After being told she was okay by doctors, events took a dramatic turn when she collapsed in severe pain while out horse riding in October last year.

She was later diagnosed with ovarian cancer after being taken to Melbourne’s Mercy Hospital for Women where surgeons removed a 20cm tumour from her ovaries.

‘I was so angry, because for well over two years, I had been suffering from recurrent urinary tract infections and having so many antibiotics thrown at me to fix it,’ she said.

‘For more than a year I’d been going to different doctors trying to find a GP who would listen when I was telling them my periods are irregular and something is wrong.

‘The response from them all was “you’re stressed, you’re fine, give it time, lose weight”.’

‘I was living with period pain, chronic fatigue, UTI-like symptoms and being bloated. I knew something was wrong but no doctors seemed concerned.’ 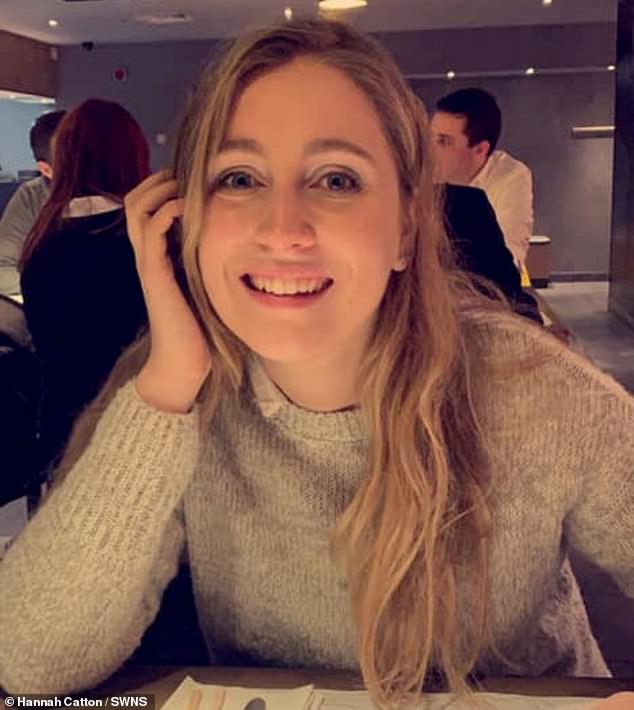 Hannah said doctors didn’t seem concerned that she was living with period pain, chronic fatigue, UTI-like symptoms and bloating. Pictured: Hannah before she was ill

Hannah, who studied veterinary science at Canterbury College, was planning a ‘new life’ in Australia, but wanted to come home every year to visit her family in Faversham.

What is ovarian cancer?

Ovarian cancer is a malignant tumour in one or both ovaries.

The ovaries are made up of three main kinds of cells – epithelial cells, stromal cells and germ cells. Each of these cells can develop into a different type of tumour.

The average age of women when they are diagnosed with ovarian cancer is age 64. It is mainly diagnosed in women over the age of 50; however, there are cases diagnosed in younger women.

‘Unfortunately, Covid threw a spanner in the works and then I got this horrific diagnosis in October last year,’ she said.

‘The last time I saw my parents and brother was when I said goodbye to them at the airport to travel to Australia almost three years ago so it’s been incredibly hard for all of us.’

Despite undergoing emergency surgery to remove the ruptured tumour, Hannah’s odds of recovering are high.

She said: ‘Due to the size of the tumour and the fact that it had ruptured I am now having chemotherapy.

‘But I’m lucky that my prognosis is good because many in my situation are not.’

Hannah hopes her story will help other women voice their concerns, even if their GP’s think otherwise.

She said: ‘I have had fantastic support from my friends here in Australia, including my boyfriend Kyall, as well as my many friends back home who have all been incredible.

‘It’s incredibly tough for them because all they want to do is jump on a plane to be with me but they’re not allowed.’

Her friends have rallied to help her raise funds for daily costs, as her medical insurance is covering the treatment. 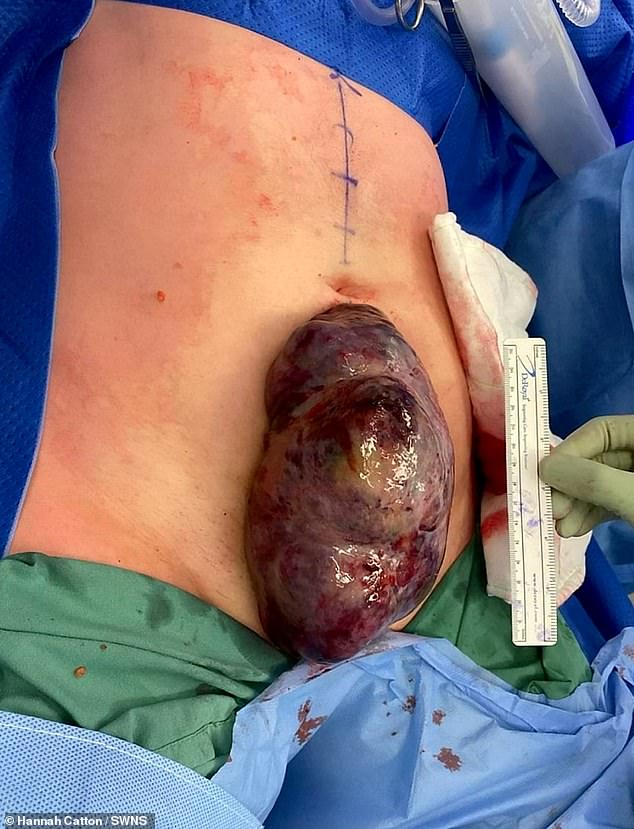 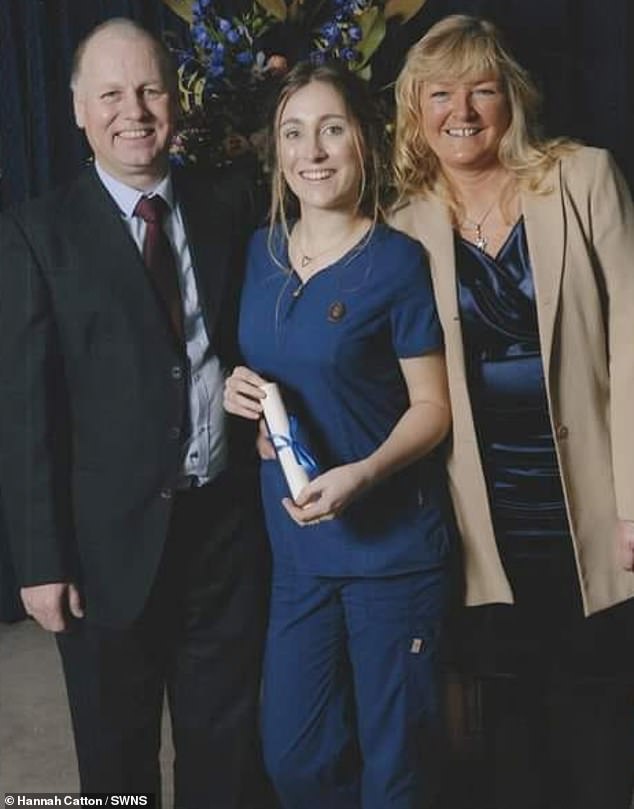 Hannah said her friends have been supportive, but it’s ‘incredibly tough’ for those back home in Faversham because they aren’t allowed to visit. Pictured: Hannah with her parents before she was ill 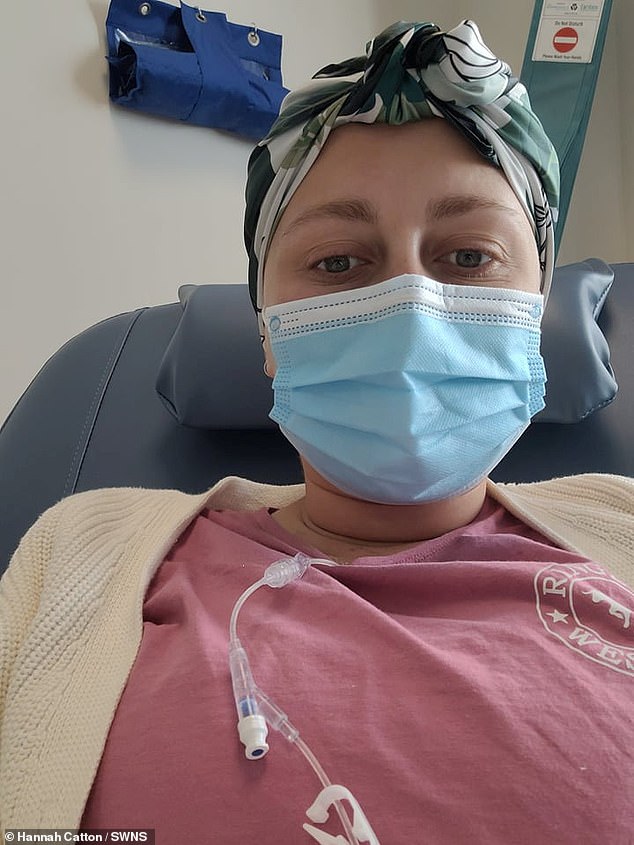 Hannah said she has plans for an ’emotional reunion’ back home once she’s well enough to travel. Pictured: Hannah undergoing chemotherapy

An online quiz night is being organised by one of her best friends, Hazel Frost, on Wednesday 26 January.

In Australia, friends have also set up a GoFundMe page which has already raised more than $3,000 (£1,589) from supporters.

Hannah added: ‘Everyone has been amazing in their support for me for which I am so grateful.

‘And as soon as I am well enough, I’ll be flying home for what will no doubt be a very emotional reunion.’