A woman is being mercilessly mocked online after claiming her husband contracted chlamydia from wearing a protective face mask on a business trip.

Twitter user @Jenwifonen shared a screenshot of the now-viral comment that was posted on WIS TV’s Facebook page on Thursday, writing: ‘Y’all… this just happened on our local news site… what is life.’

The woman, who is named Cheryl, was responding to a woman who alleged she had gotten an infection from wearing a mask when she wrote: ‘My husband had to where a mask on a business trip and now he has clamedia [sic].’ 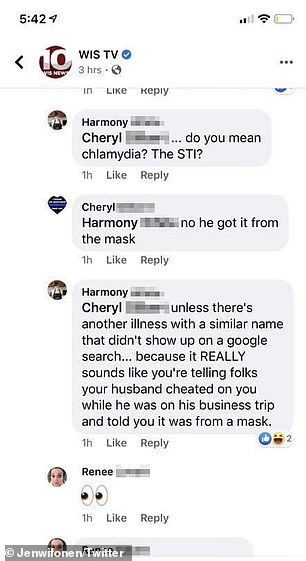 Yikes: A woman named Cheryl claimed her husband contracted chlamydia from wearing a protective face mask on a business trip while commenting on one of WIS TV’s Facebook posts 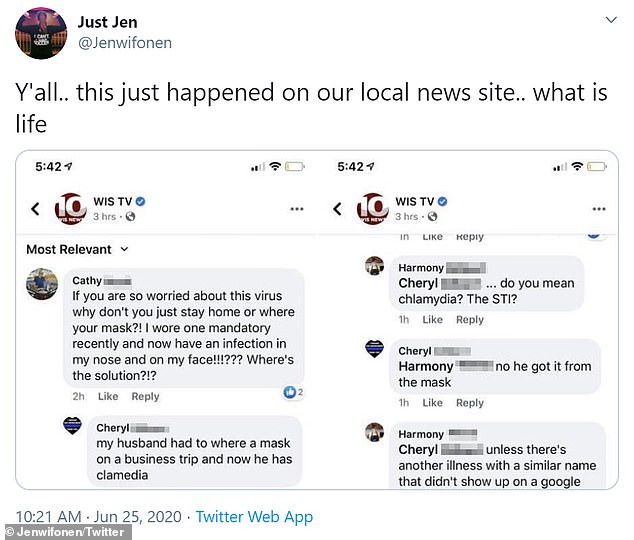 ‘…do you mean chlamydia? The STI?’ a Facebook user named Harmony asked.

‘No he got it from the mask,’ Cheryl replied, prompting Harmony to gently explain what she is implying with her claim.

‘Unless there’s another illness with a similar name that didn’t show up on a Google search… because it REALLY sounds like you’re telling folks your husband cheated on you while he was on his business trip and told you it was from a mask,’ she wrote. 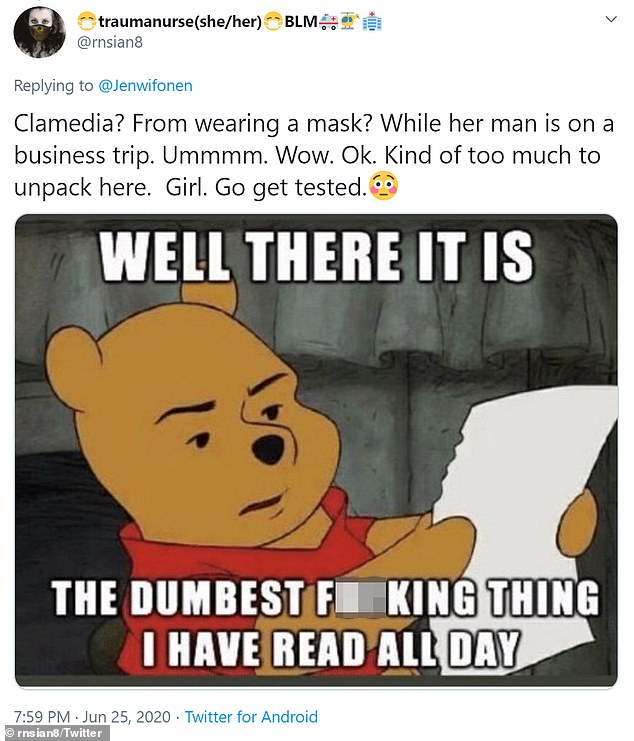 People have been taking to the comments to poke fun at Cheryl’s apparent confusion as well as her misspelling of the STI.

‘My coworker and I went on a business trip and she’s now carrying my child because we both wore masks. MY WIFE IS FURIOUS AT THE GOVERNOR!’ one person joked.

‘Clamedia? From wearing a mask? While her man is on a business trip. Ummmm. Wow. Ok. Kind of too much to unpack here. Girl. Go get tested,’ another commented.

Someone else chimed in: ‘He was covering the wrong head!’

Seinfeld fans couldn’t resist pointing out how Cheryl’s comment was similar to ‘the tractor story’ plot that appeared in the show’s ninth season. 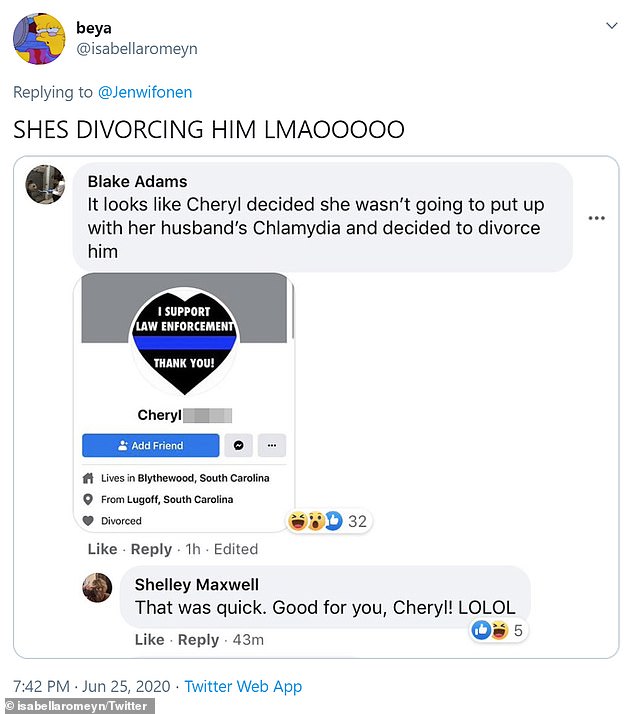 Assumption: Many people assumed she was referring to the sexually transmitted infection chlamydia, which implies her husband cheated on her and lied about it

In the episode, titled ‘The Burning,’ Jerry’s girlfriend Sophie claims she got gonorrhea from riding a tractor in her bathing suit.

Kramer explains that that’s impossible, insinuating her boyfriend told her that because he was the one who gave her gonorrhea.

A number of people insisted Cheryl had to be trolling them with her comment, though others pointed out she could have been referring to chlamydia pneumoniae, a type of bacteria that can cause respiratory tract infections such as pneumonia.

Wearing a face mask will not make you sick as Cheryl claimed, but research shows they don’t provide full protection. It’s possible her husband contracted chlamydia pneumoniae on his business trip despite wearing a mask.

‘There is a bacteria that causes pneumonia known as Chlamydia pneumoniae. But the chances that she knows the exact bacteria are low and the chances it was caused by mask wearing are even lower lol,’ one person tweeted. 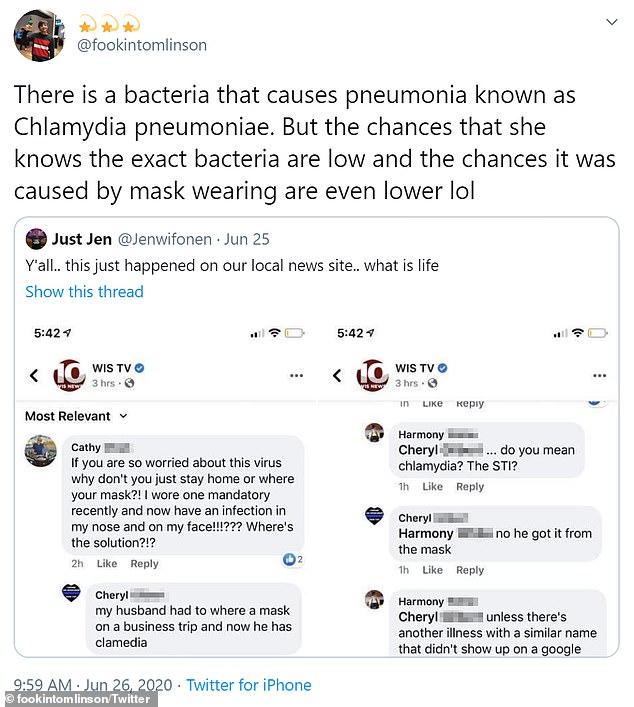 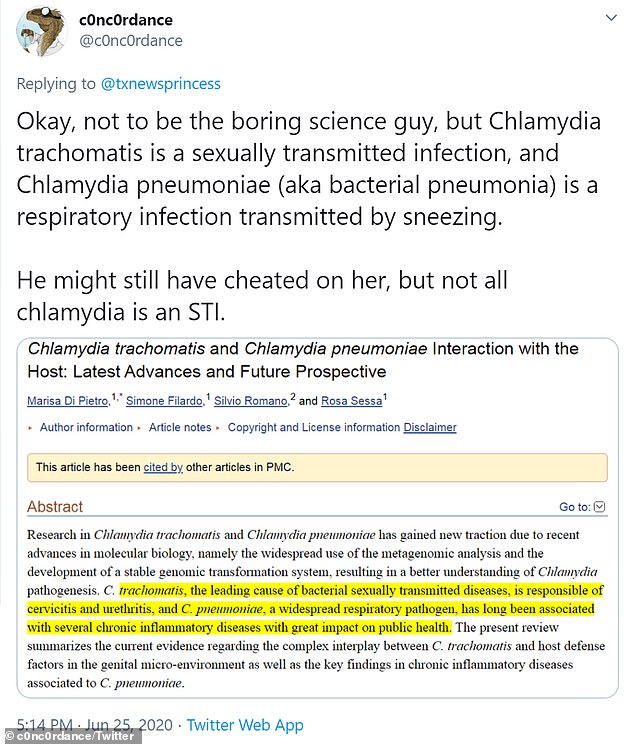 Hmm: A number of people insisted Cheryl had to be trolling them with her comment, though others pointed out she could have been referring to the bacteria chlamydia pneumoniae

A neuropsychiatrist, who known as Dr. Ben H. on Twitter, noted: ‘Could mean Chlamydia pneumoniae Possible for a business trip, if he was in contact with an infected person for a sig time. It’s not highly contagious. More likely spread between room mates & confines work environments than brief encounters.’

‘I think she is most likely just trolling though,’ he added.

‘The fact that they misspelled “wear” as “where” like the OP and then used “clamedia” seems to indicate it is formidable trolling,’ someone else shared. ‘I can already imagine them wearing a monocle and top hat while riding a penny-farthing to the sunset.’

People were fascinated by Cheryl and were eager to find out what happened between her and her husband.

A few Twitter users pointed out that her Facebook profile says she is divorced. Some gleefully hoped that meant she had left her cheating husband over the ‘clamedia’ debacle, while others saw it was another sign that she was trolling them.

Cheryl’s comments have since been deleted, but that hasn’t stopped people from taking to the post to ask what is going on with her.

‘We want to know what happened to Cheryl! Did she realize her husband cheated on her? Did she see a doctor? Has she filed for divorce yet?’ one person asked. ‘These are the important questions, people!!’

‘I am in Australia and am invested, the Aussies need to know how Cheryl is doing and what happened with her husband… we need closure,’ another agreed.