A woman revealed she was dress-coded by the ‘happiest place on Earth’ after she sported a backless top that Disney seemingly labeled ‘inappropriate.’

Jordyn Graime, from New Jersey, claimed she was given a ‘free T-shirt’ at Disney after flaunting around in a blue handkerchief top that too revealing for the theme park’s regulations.

In a viral clip, which has amassed over four million views, the University of Massachusetts student revealed she was flagged down for violating park policy at Disney World in Orlando.

‘When you get dress coded at Disney,’ read the caption of incident that saw Jordyn being given a free Disney T-shirt to cover up.

Jordyn Graime, from New Jersey, revealed she was dress-coded by the ‘happiest place on Earth’ after she sported a backless top that was ‘inappropriate’ 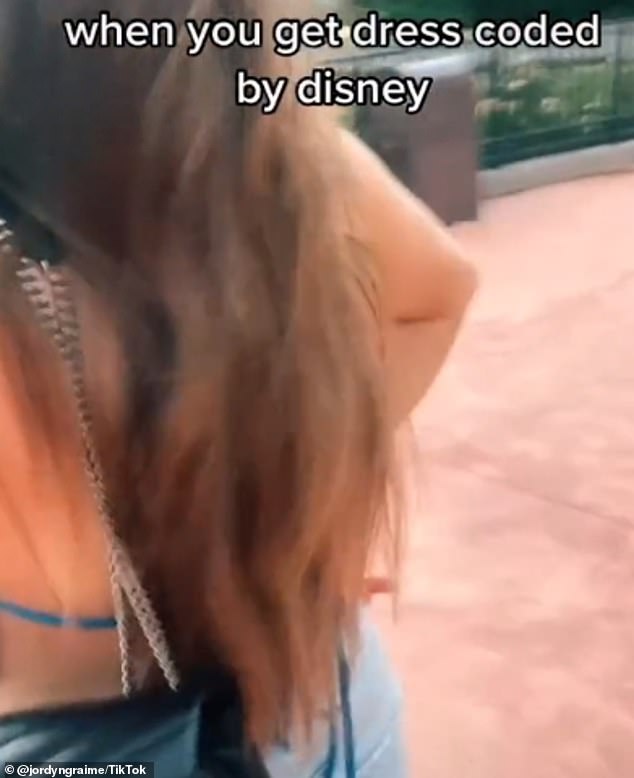 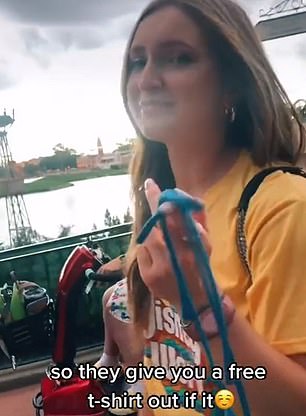 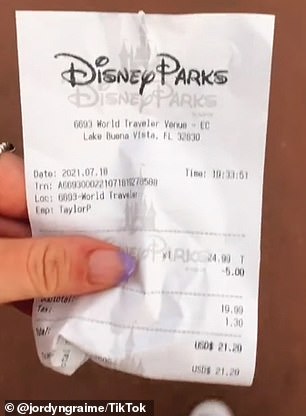 As she showed off her allegedly risqué outfit – which included a loose-fitting top, denim shorts and black purse – she said: ‘Disney doesn’t like backs I guess.’

The softball player didn’t reveal why she was dress-coded, however, in its guidelines, Disney World states, ‘We reserve the right to deny admission to or remove any person wearing attire that we consider inappropriate or attire that could detract from the experience of other guests.’

The regulations also note that the park has the right to deny or request those wearing dangerous clothing – such as ‘excessively torn clothing or loose fitting clothing which may drag on the ground and create a potential trip hazard – to change.

And while she didn’t get to parade around the park in her seemingly inappropriate outfit, she did receive a free T-shirt to change into – which retails for $20 according to the receipt Jordyn showed in the clip – which she said was the silver lining of it all.

In the past, a Florida woman also questioned what the ‘happiest place on Earth’ thought was suitable after she was dress-coded at the park. 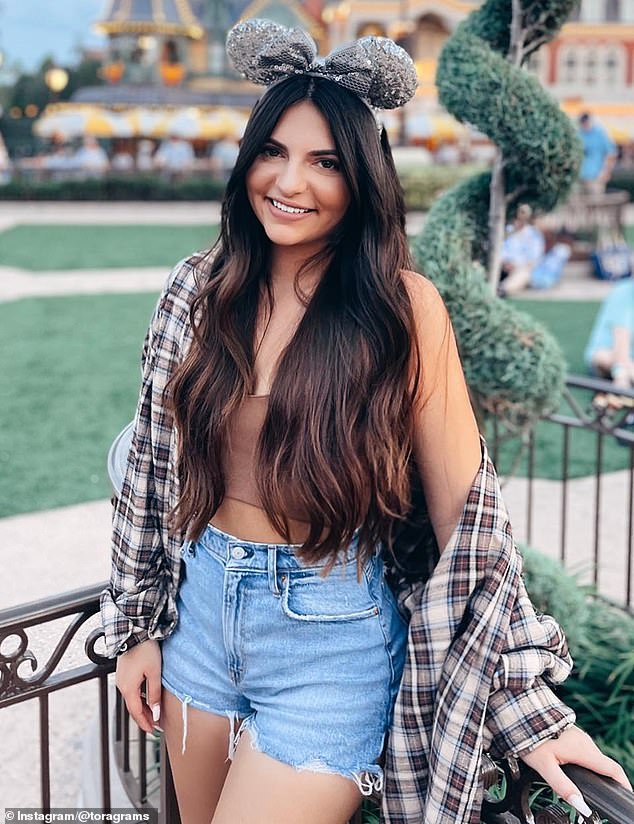 Tori Cannella, 23, was visiting the Magic Kingdom in denim cutoff shorts and a black top when an employee notified her that it was against the park’s dress code (pictured on a different visit)

Tori Cannella, 23, was visiting the Magic Kingdom in Orlando in a pair of denim cutoff shorts and a black crop top when an employee notified her that it was against the park’s dress code.

And similarly to Jordyn’s incident, the park employee brought Tori to the gift shop and gave her a free Walt Disney World tee to wear instead.

‘So yeah I just experienced getting dress coded at Disney,’ she wrote in her video, which has been viewed 6.6 million times in just three days.

‘I mean, I kinda agree w them looking back at this video,’ she added.

In the clip, she zooms in on her outfit, which consists of jean shorts with a silver-colored chain belt.

She’s wearing a long-sleeve black crop top, which falls at her waist and only closes by two ties at the front.

Although Tori admitted that her outfit may have not been the most appropriate attire for a theme park, she noted in the comments that the employee who flagged her crop top ‘was not very sweet about it’, suggesting that she could have been ‘in a bad mood’ or perhaps ‘had it out’ for her.

Users claimed there was nothing wrong with her top, while others questioned why the student wore the revealing top to a theme park

And while Tori conceded, Jordyn doesn’t seem to be backing down on her outfit choices as users agreed that there was nothing wrong with her top, while others couldn’t defend the student and explained that she shouldn’t of worn the top to begin with.

One user said: ‘I am on Disney’s side on this. Its a family park, wait to wear that for nightclubs. You did look pretty though.’

Another user added: ‘Bruh y’all are acting like Disney isn’t 5000 degrees In August her shirt was fine and appropriate for weather.’ [Sic]

‘Wear risque attire to Disney to acquire free shirt. Thanks babe! The back of your back is ridiculous, sorry they don’t allow you to do you,’ wrote one user.

‘Who wears that to a kids park though,’ questioned another user.

The most magical place on earth – IF you follow the dress code! Disney’s clothing regulations, revealed

Disney states on its website that it ‘reserves the right to deny admission to or remove any person wearing attire that is considered inappropriate or attire that could detract from the experience of other guests’.

The company lays out several guidelines for guest attire, however it notes that staff have the right to refuse admittance to anyone that they believe is wearing ‘inappropriate’ attire, even if that outfit is not banned within the list of rules, which prohibits: