A woman who was gang raped by five men was raped again by a police worker when she went to report the crime in India.

The woman revealed the horrific nature of the crimes on Thursday and a police chief has opened an investigation.

A woman who was gang raped by five men was raped again by a police worker when she went to report the crime in India. Pictured: Students protest following the gang rape and murder of a 19-year-old woman in Uttar Pradesh in October

The victim, 35, from a village served by the Jalalabad police station, said she was walking by foot when she was attacked.

She told reporters that five men in a car forcibly dragged her to a field where they raped her, according to The Times of India.

After the brutal attack, she went to the police station where she spoke with a police sub-inspector.

But he then took her to his room and raped her, she claims.

The woman said that her First Information Report (FIR) was not registered by the officer.

She then went to the additional director general of police to report the horrific assaults and he ordered an inquiry.

India is one of the world’s most dangerous places for women, with a rape occurring on average every 15 minutes based on federal data.

In early October, a six-year-old rape victim has died in hospital ten days after being attacked, sparking furious protests in India which saw her family lay the girl’s body in the street.

The girl was allegedly sexually assaulted by her cousin while she was at home in India’s northern Uttar Pradesh state. 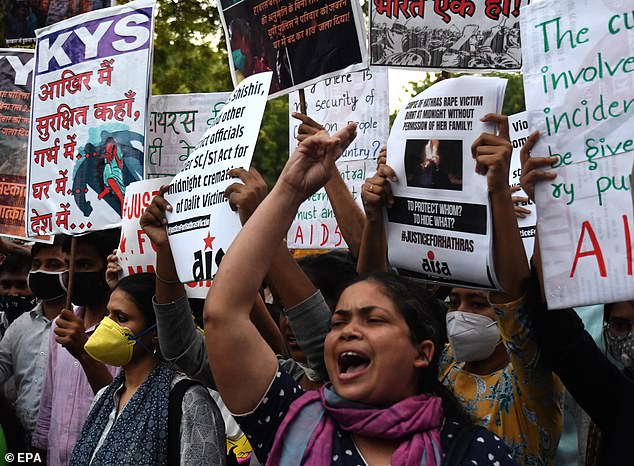 Protests were held across India following the alleged gang-rape of a 19-year-old Dalit woman in September. India is one of the world’s most dangerous places for women, with a rape occurring on average every 15 minutes based on federal data

She was being treated at a hospital in Delhi but succumbed to her injuries on October 6.

Her death followed widespread demonstrations over the death of a 19-year-old woman following an alleged gang-rape in September.

In December 2012, the gang-rape of a 23-year-old woman sparked nationwide outrage and led to a tough new anti-rape law.

An average of nearly 90 rapes were reported in India every day last year, according to data by the National Crime Records Bureau, but large numbers are thought to go unreported.