A woman claimed to have spotted her husband in an Indian restaurant’s promotional video — even though he died in 2014.

Spice Cottage in Westbourne, West Sussex, was flooded with social media comments on the footage, which it said was filmed earlier this month.

Diners at the venue can be seen tucking into meals as waiters attend to customers in the clip, which ends with a round of applause for the staff.

The video was posted to the restaurant’s Facebook page, where Lucy Watson commented: ‘How old is the footage? My late husband and his son are on the first shot and he died in 2014?’

A reply from the restaurant said: ‘Hi Lucy, sorry to hear this. This footage was recorded last week.’

An Indian restaurant is at the centre of a scandal after a woman claimed she spotted her husband – who has been dead for nine years – dining at the Indian restaurant. Spice Cottage in the village of Westbourne, near Chichester in West Sussex, was flooded with comments on its latest promotional video (above) – which it said was filmed a few weeks ago

The restaurant posted the video on January 16 with a caption that said: ‘New year, new mood!

‘For the last few weeks, we’ve been working hard to make our dining experience even more memorable.

‘Join us for a perfect blend of exquisite flavours, with classical and unique dishes inspired by ancient family recipes.’

The video was posted to the venue’s Facebook page, where Lucy Watson commented: ‘How old is the footage? My late husband and his son are on the first shot and he died in 2014??’ A reply from the restaurant said: ‘Hi Lucy, sorry to hear this. This footage was recorded last week’

But social media users flooded the post with more than 100 comments, swapping theories about the bizarre mystery.

As yet, there have been no updates on the drama.

Ms Watson and the venue did not respond to a request for comment. 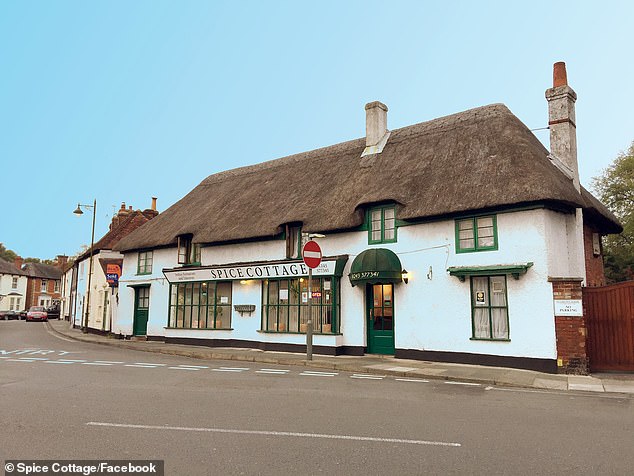 Spice Cottage in Westbourne, near Chichester in West Sussex, is popular with locals