‘She didn’t even like you’: Woman calls out a ‘fake b****’ at 18-year-old sister’s FUNERAL and demands she ‘leave the room’ in viral video (but she insists her sibling would have loved the drama)

A video of a young woman from California yelling at a ‘fake b****’ who came to her sister’s funeral has gone viral.

Jasmine (@jazzklassykushco) shared the clip on TikTok two days ago, capturing her standing at the podium in mourning clothes next to her late sister Ariyanna’s photo.

As the camera rolls, Jasmine can be heard angrily telling off another woman who is not seen on camera, insisting that Ariyanna ‘didn’t even like’ her before telling her to ‘leave the room.’

Not having it: Jasmine shared a video taken at her 18-year-old sister Ariyanna’s funeral in California, where she seemingly told off an attendee 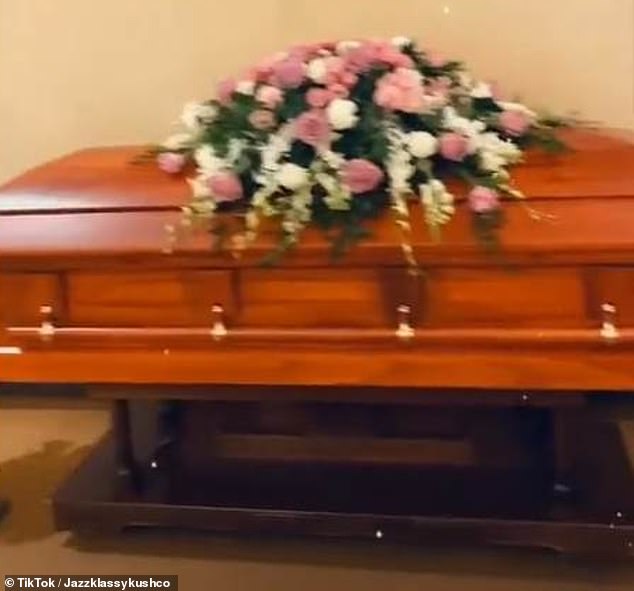 Still has her back: Jasmine calls out an unseen funeral attendee, saying her sister ‘didn’t even like you’ and ‘you owe her money’ before telling her to leave

In text written across the video, Jasmine wrote: ‘When the fake people show up to my sister’s funeral.’

The clip shows her at the front of the room, standing near a casket and an enlarged photo of her sister, who died at age 18 in a car accident.

Jasmine is dressed for mourning in a black dress and sunglasses, but her grief over the loss of her sister seems to have momentarily been taken over by anger on her sister’s behalf.

As the video begins, Jasmine can be seen seemingly addressing another woman off-camera.

‘You’re a fake b****,’ she says. ‘She didn’t even like you. You owe her money. And I didn’t even see you donate to my sister’s funeral, so you’re automatically disqualified.

‘You can leave the room. Yeah. Bye. Bye. Don’t be all surprised now,’ she says. 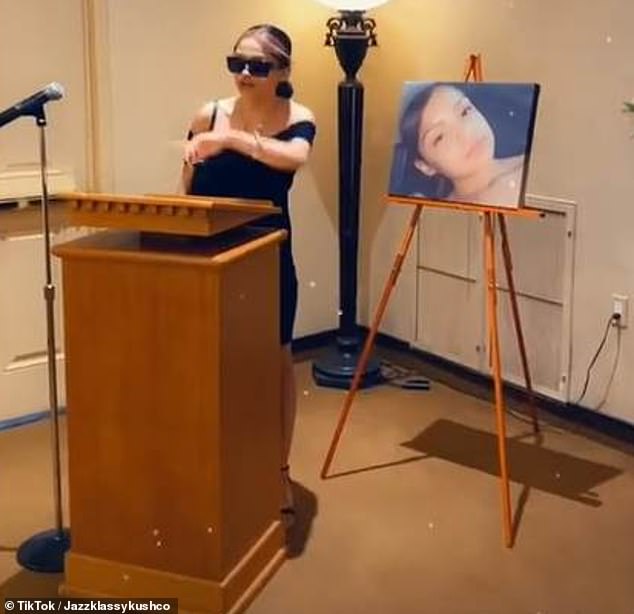 Viral: It’s unclear if the video was staged, as no one else is seen on camera, though it did at least take place in the room that Ariyanna’s funeral was held

The clip also makes use of a popular TikTok recording in which voices can be heard gasping is shock, which plays in the background as she speaks.

It’s unclear from the video whether it was recorded during the actual funeral, or just filmed in the room where it was held. It’s also unclear whether Jasmine was actually addressing another person.

However, she told the Daily Dot that she thinks her sister would have approved of her outburst.

She said that both she and Ariyanna loved the show Pretty Little Liars, which has several dramatic funeral moments — so Jasmine wanted to ‘give her funeral that touch.’

‘I hope I gave you the best funeral baby sis,’ she wrote on TikTok. ‘Fly high.’ 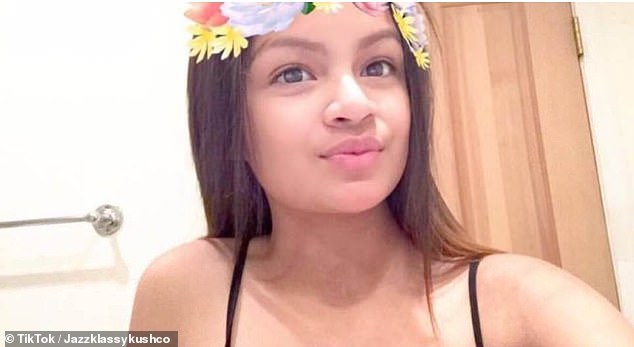 Making it interesting: Jasmine said her sister loved Pretty Little Liars, which had ‘several funerals with a dramatic flair, so she wanted to ‘give her funeral that touch’

On TikTok, the clip has earned 9.6 million views and two million likes, and many commenters approve of her behavior.

‘Idc what anybody say, we need to normalize calling ppl out bc all of a sudden when you dead every1 was your best friend,’ wrote one.’

‘No bc if my sister doesn’t do this for me… there gonna be a whole bunch of people saying they were my ‘friend’ & they weren’t,’ wrote another.

‘Your sister probably would’ve wanted you to say that,’ said a third commenter.

‘My siblings better come like this for me!’ wrote one more, while yet another insisted: ‘This is what I want.’

‘I just know your sister up in heaving laughing so hard,’ another commenter chimed in.