A Washington woman was stabbed, duct taped and buried in a shallow grave in the woods by her husband, before digging herself out and finding help.

Young Sook An, a 42-year-old woman from a suburb of Washington about 60 miles southwest of Seattle, was kidnapped by her husband on Sunday afternoon. The couple, who are divorcing, were fighting about money.

Her husband allegedly told her he would ‘rather kill her than give her his retirement money.’

Chae Kyong An, 53, who does not live with the woman, but would stop by to do laundry, according to the couple’s daughter, attacked his wife at the house he used to share with her at about 1.00pm on Sunday October 16.

An followed Young Sook into the bedroom where she had gone to change and attacked her.

He punched her and duct taped his wife’s hands behind her back and placed tape across her eyes, thighs and ankles.

Young Sook was able to call 911 with her Apple watch and sent an emergency notification before being dragged by her husband to the garage and having her watch smashed with a hammer.

She was then dragged to the garage and put in An’s 2006 Dodge Caravan.

Surveillance footage from a neighbor’s house shows the van parked at the family home and then speeding off a little while later.

Young Sook told police she was bound and taken somewhere in the van where she could hear her husband digging in the dirt.

The probable cause document reads that ‘a heavy tree’ was also ‘put on top of her.’

‘After being put in the ground she could hear her husband walking around the hole and dirt being put on top of her,’ it continues.

She said her husband told her she was going to die.

Police in Lacey, Washington responded to the woman’s home Sunday afternoon after hearing the screams of a woman who sounded ‘gagged’ over a 911 call.

The responding officers found the empty home with signs of a disturbance inside.

The garage door had been left open and the door to the house was unlocked.

Neither of the couple’s two children were initially present at the scene.

According to the probable cause report, the home ‘has a previous history of domestic and violence.’ 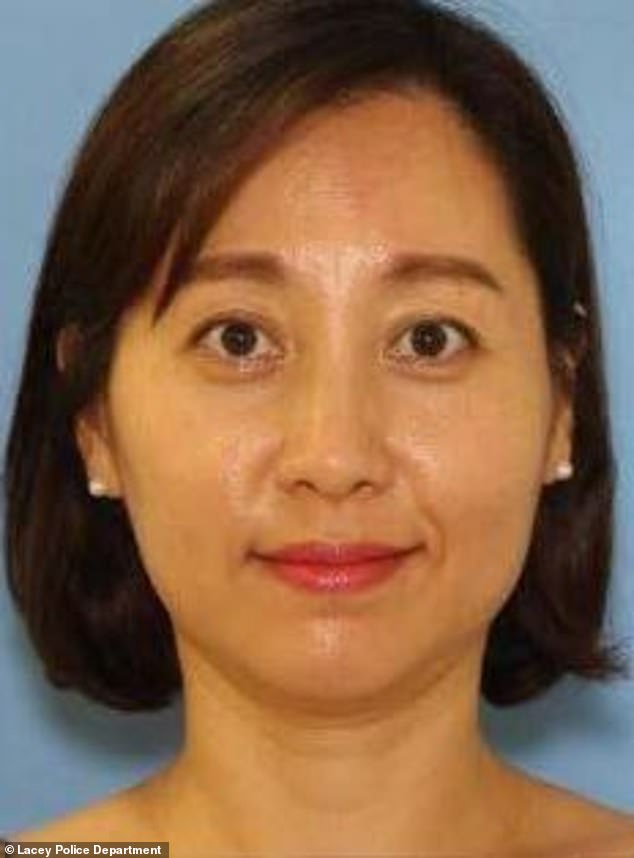 Young Sook An, 42, was allegedly beaten, duct taped, kidnapped and buried in a shallow grave by her estranged husband, with whom she is in the middle of a divorce 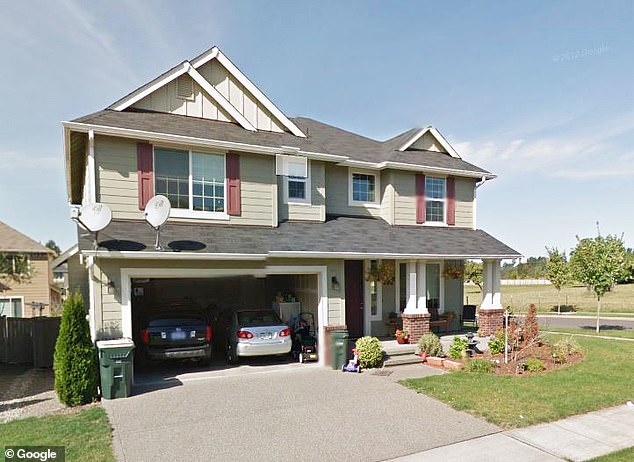 The couple previously shared a home together in the Washington suburb of Lacey, about 60 miles southwest of Seattle. An would still come by to do his laundry, according to the couple’s daughter 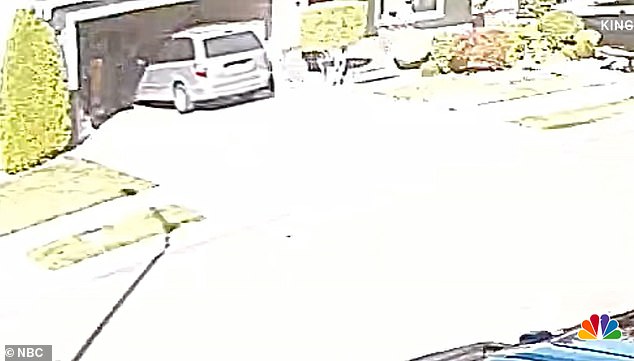 Young Sook recalled to authorities struggling to breathe while inside the shallow grave and managing to keep dirt off her face by continually squirming around.

She estimated she was inside the shallow grave for several hours.

As the day turned to night, Young Sook said she was able to free herself from the duct tape.

Once the tape was off her eyes, she saw the van’s window was steaming and a light was on inside.

She then got up and ran for about 30 minutes until she found a home.

According to court documents, she was found hiding behind the shed in the front yard of a property just before 1.00am on Monday October 17. The residents had called 911.

When police arrived and identified her as the missing female she exclaimed, ‘My husband is still out in the woods somewhere!’

Investigators were later able to find the shallow grave at the edge of a clearing.

‘The hole appeared to be freshly dug. Outside the hole was a piece of duct tape,’ the report said. 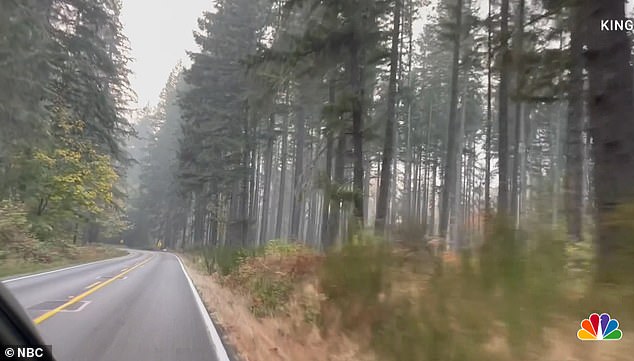 According to a Thurston County Superior Court filing, when Young Sook ultimately escaped and called the police, she ‘had duct tape still wrapped around her neck, lower face and ankles.’

‘There was also extensive bruising to her legs, arms and head and her clothing and hair were covered in dirt.’

Chae Kyong An is facing charges of first-degree attempted murder, first degree kidnapping and first-degree assault, though he has not yet been officially charged.

He was booked into county Jail Tuesday and has been held without bail since Wednesday.

Young Sook pleaded with the judge to keep her husband in jail.

According to a statement by Young Sook – delivered on her behalf by her attorney in court – she has requested he continue to be held without bail.

‘Please no bail. I am really afraid for my life. I just want to emphasize that I fear him so much and he will kill me again if he is out.’ 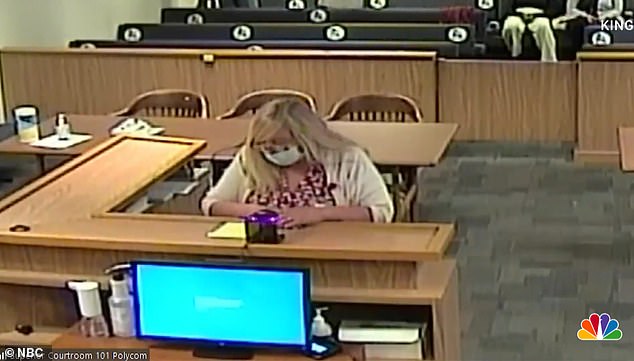 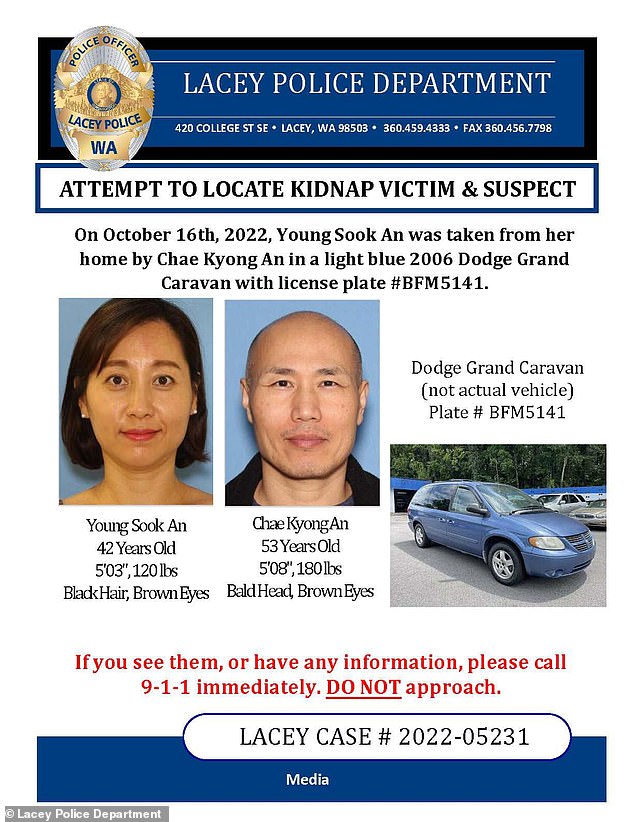 When Young Sook called the police with her Apple watch, they heard a woman ‘screaming’ who sounded like she had been ‘gagged’