By Darren Boyle and Rory Tingle For Mailonline

A woman was seen ‘crying and screaming’ next to the body of a fatally injured man moments after he fell six storeys to his death.

The man, who has not been named, was pronounced dead at the scene after plummeting six floors in North Finchley, north London, yesterday afternoon.

A woman in her 20s was arrested nearby on suspicion of murder and remains in custody. Police said she was known to the victim. 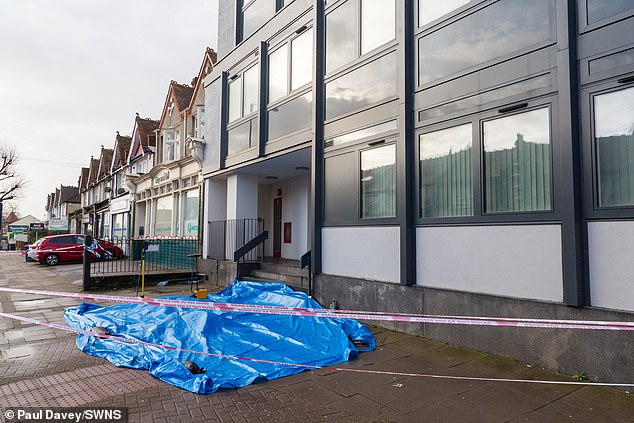 Bystanders saw eight or nine police cars at the scene along with two or three ambulances.

Naik Mohammad, 19, a barber who works at Star Professional Hair Stylist opposite the block of flats, said: ‘I didn’t see how he fell down, but I saw him on the floor.

‘I looked over and saw that he was on the ground and one of our customers went outside and I think he was the one who called the police.

‘After about one minute a woman came down and started crying and screaming, and someone took her to the corner to help her calm down.

‘I saw all the blood all over the pavement. I gave a towel to someone and they put it over the body.

‘I couldn’t sleep all last night. The whole night I was just too scared.’

Pointing towards a shape under a blue tarpaulin at the foot of the apartment block, he added: ‘That’s still the body there.

‘There were a lot of police yesterday. There were about eight or nine police cars and two or three ambulances.’

A police cordon remains in place with officers guarding the front door of the apartment block.

Other police, not wearing uniform, have been going in and out of the building. The window that the man fell from remains swung wide open and a light is on inside the flat.

The dead man, believed to be from Eastern Europe but living in the flat in North Finchley, north London, is yet to be formally identified.

His body remained on the pavement outside the nine-storey building under a blue tarpaulin until 1pm today when it was removed. 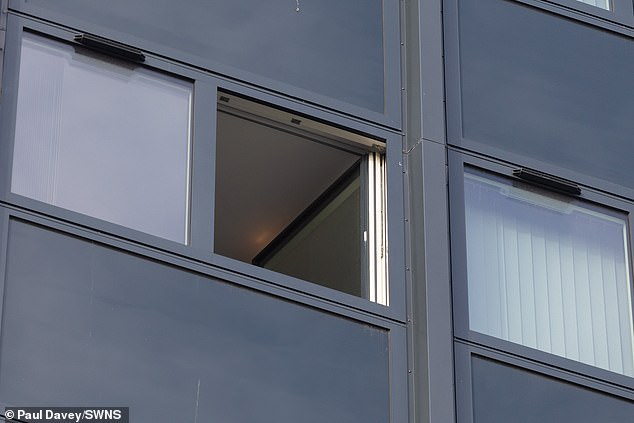 The open window on the six storey of the tower block in North Finchley, London

A Met Police spokesman said: ‘Officers were called by parameics at 3.20pm on Wednesday to reports of a critically injured man.

‘It was reported that the man had been injured after a fall from height; he was pronounced dead at the scene.

‘Formal identification awaits, but the deceased is believed to be a 33-year-old man, originally from Eastern Europe but living in Finchley.

‘Officers are working to inform his next of kin. A forensic scene is in place. A post-mortem examination will be arranged in due course.’

He added: ‘A 28-year-old woman was arrested at the scene on suspicion of murder.

‘It is believed that the parties were known to each other. Officers from the Specialist Crime Command have been consulted. At this stage of the inquiry, the death is being treated as unexplained.’

Anyone who witnessed the incident is asked to call police on 101 quoting CAD 4636/feb12. 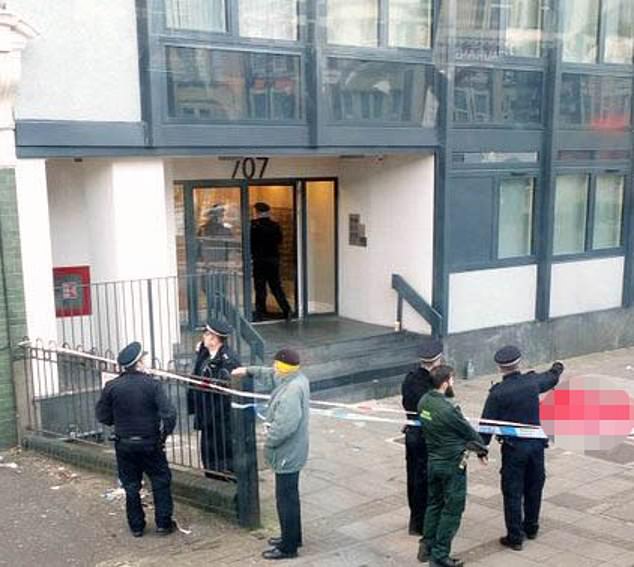 The scene yesterday, with police around the entrance to the tower block and the man’s body covered by a red blanket