A 60-year-old woman suffered ‘debilitating’ lesions on her tongue after receiving Pfizer’s Covid vaccine – with each shot making her symptoms worse.

Her side effects, which also included a dry mouth and inflammation, were so painful she was left unable to eat.

Doctors struggled to find the culprit for nine months, during which she lost 17 pounds (8kg).

By the time she was finally diagnosed, her swollen tongue had began to split open leaving deep, agonizing sores.

She was diagnosed with Sjögren’s syndrome, a condition that sees the immune system go haywire and damage healthy parts of the body.

Her symptoms were finally cured with a six-week course of topical steroids.

Doctors chronicled the rare side effect in a report published last month in the American Journal of Case Reports.

The unidentified patient, from Australia, received three vaccine doses in total – two of which formed the initial course, as well as a single booster.

Similar symptoms were also documented in patients infected with coronavirus, which led to the condition being dubbed ‘Covid tongue’. 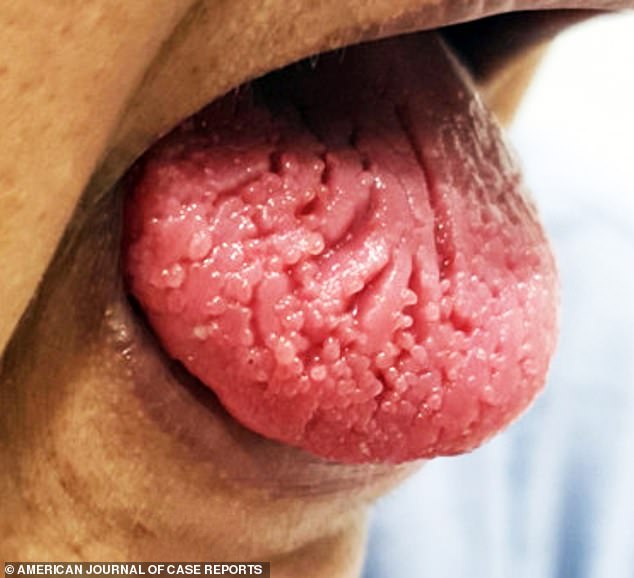 The woman experienced swelling of the tongue and extreme discomfort caused by lesions. She could barely eat, and lost 17 pounds as a result

Oral sores are not a new phenomenon after a vaccine and have been spotted in people following flu, hepatitis B and papillomavirus jabs.

But only a handful of cases have been reported after Covid vaccines, despite billions of doses being administered worldwide.

What is Sjögren’s syndrome, and how could a Covid vaccine trigger it?

Sjogren’s syndrome is an autoimmune condition that causes the body’s immune system to attack healthy cells that produce saliva and tears.

People of any age can develop Sjogren’s syndrome, but it is most often diagnosed in women over 40

The causes of Sjogren’s syndrome are unknown but research suggests some people are genetically more inclined to get it.

Symptoms include dry mouth and eyes, fatigue, and joint pain

While the Covid vaccines currently in use are highly safe and effective, there is always the risk that vaccination will trigger an autoimmune response.

The unnamed patient developed sores in her mouth about three days after receiving the first dose of the Pfizer-BioNTech vaccine.

Her symptoms had partially abated before she received the second dose, after which the symptoms returned still more severely.

She underwent a cadre of blood tests to rule out other diagnoses such as HPV and other infections.

She was referred to an outpatient rheumatology clinic with suspected Sjogren syndrome, an autoimmune disease which causes the immune system to attack glands that produce moisture in the eyes, mouth, and other parts of the body.

Doctors first prescribed a topical version of clonazepam, a benzodiazepine that when ingested orally, can treat burning mouth syndrome.

When that did little to alleviate her symptoms, doctors prescribed an oral steroid which caused symptoms to improve 60 per cent, but treatment stopped because it was causing the woman abdominal pain.

Doctors finally settled on a lower dose topical iteration of the steroids dissolved in water and taken consistently for about six weeks until symptoms abated.

The condition was not easily diagnosed and doctors were puzzled at first. While oral symptoms can be associated with the Pfizer vaccine, they are uncommon and likely under recognized by providers who do not specialize in oral healthcare.

Writing in the journal, the doctors said: ‘A subsequent review of the timeline of history and medications, including vaccinations, identified a clear relationship between the exacerbation of oral symptoms after each [Pfizer-BioNTech] vaccination.’

The Centers for Disease Control and Prevention’s (CDC) database for Covid vaccine side effects does not include oral symptoms.

A major caveat is that reporting the adverse effects is voluntary and therefore cases may be underreported.

‘This case demonstrates that oral symptoms can be associated with BNT162b2 vaccination, which is likely under-recognized by practitioners outside the field of oral health,’ the doctors said in the case study.

They advised the medical community to be on the lookout for similarly unusual effects of vaccination:

Roughly 68 per cent of the U.S. population – nearly 225 millions people – is fully vaccinated against Covid, meaning the have received the prescribed two doses of vaccines.

The most common side effects of receiving a COVID vaccine include pain at the injection site, headaches, fatigue, dizziness, nausea, chills, and fever.