A couple desperate to complete their family fear the coronavirus pandemic has decimated their chances after their privately-funded IVF treatment was cancelled.

Natalie Williams, 40, a midwife from Formby, is desperate to have a child with husband Shaun, 39, whom she married in December last year.

Already a mother to two children from her previous marriage, Natalie told how she was sterilised 11 years ago, after suffering two miscarriages – a decision she now regrets.

The couple are now paying for their treatment to enable them to have a child, and have taken out a loan as well as using their life savings to fund it.

Natalie Williams, 40, a midwife from Formby, is desperate to have a child with husband Shaun, 39

However, days before Natalie was due to start taking her hormonal medication to prepare her body for IVF, they received the devastating news that their treatment had been cancelled.

Natalie told FEMAIL she was ‘completely devastated’ and now fears their dream of having a baby is in jeopardy – and they’re losing money because they’d already started paying back installments of their loan.

‘We totally understand why they are doing it, but I believe couples should have been given the choice and a disclaimer given to sign with the risks on,’ she said.

‘Many women will get pregnant naturally over then next few months and no one is telling them they can’t or mustn’t do so. We don’t believe it’s fair. 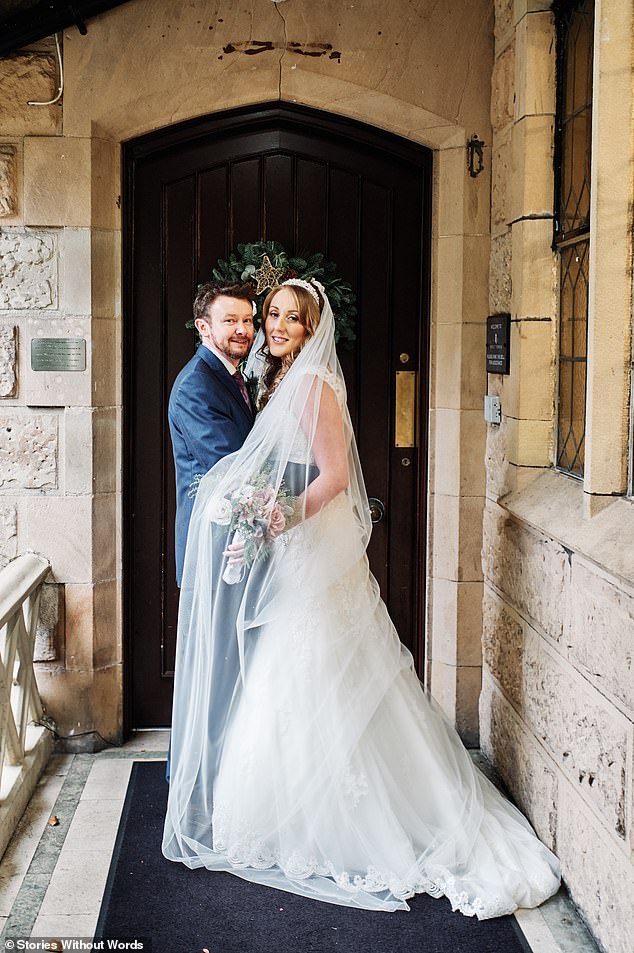 The couple, who married in December (pictured) are paying for their IVF treatment to enable them to have a child, and have taken out a loan as well as using their life savings to fund it

‘We just don’t have that money spare. It’s taken our life savings plus a small loan to get us this far.

Can a woman who has been sterilised become pregnant again?

Female sterilisation is an operation to permanently prevent pregnancy. The fallopian tubes are blocked or sealed to prevent the eggs reaching the sperm and becoming fertilised. It is more than 99 per cent effective at preventing pregnancy.

It does not affect your hormone levels or sex drive, and you’ll still have periods.

Female sterilisation can be reversed, but it’s a very difficult process that involves removing the blocked part of the fallopian tube and rejoining the ends.

There’s no guarantee that you’ll be fertile again (able to get pregnant) after a sterilisation reversal.

The success rates of female sterilisation reversal vary widely, and depend on factors like age and the method that was used in the original operation. For example, if your tubes were clipped rather than tied, a successful reversal is more likely.

Sterilisation reversal isn’t usually available on the NHS; having it done privately costs between £3,000 and £5,000.

‘We are paying the repayments every month but still haven’t started treatment.’

A statement issued by the European Society of Human Reproduction and Embryology last month said all couples considering fertility treatment ‘should avoid becoming pregnant at this time’.

It advised those who are already having IVF to consider freezing their eggs or the embryos they have created for a pregnancy until the pandemic is halted.

Natalie argued that time is ‘not on our side’ and waiting just a few months will ‘reduce our chances massively’.

Private clinics typically refuse to treat women aged 45 and over, while NHS clinical commissioning groups do not generally allow women a second round of IVF after they turn 40.

Natalie met Shaun, who works in education and has a son from a previous relationship, on dating website Zoosk in August 2018 and claims it was ‘love at first sight’.

‘We knew within months of meeting we were soulmates and really wanted a child together to complete our family and to bring us all together and bond us all as one,’ Natalie explained.

‘We’ve picked names, dreamed of gender revels and planned out how to tell our family and friends about our new addition. 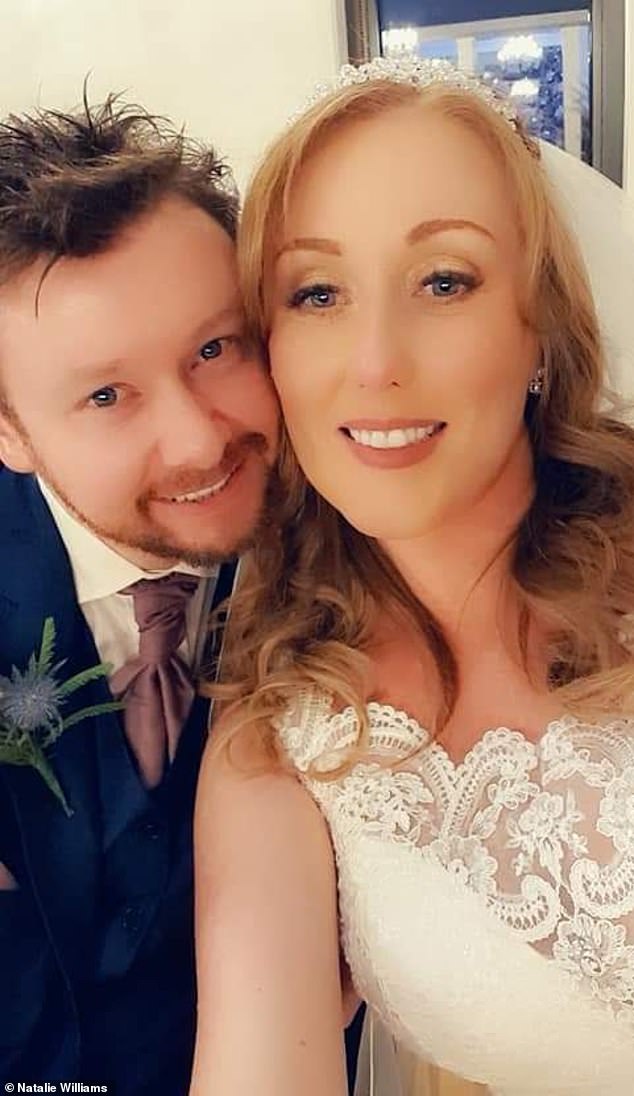 Already a mother to two children from her previous marriage, Natalie told how she was sterilised 11 years ago, after suffering two miscarriages – a decision she now regrets 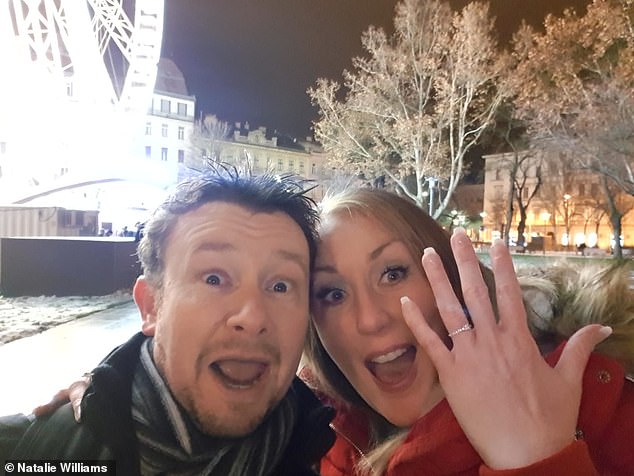 Natalie met Shaun, who works in education and has a son from a previous relationship, on dating website Zoosk in August 2018 and claims it was ‘love at first sight’. The couple enjoyed a whirlwind romance, becoming engaged in January 2019 and marrying 11 months later

‘Unfortunately I got sterilised 11 years ago as I know in that relationship I could never risk having any more children, and I’d also had two miscarriages in-between my two children.

‘Even though it was the right decision at the time, I don’t feel I was made aware of the full implications for the future and I received no councilling beforehand.

‘It’s something I now regret, especially now I’ve meet Shaun and we are so desperate to have a child of our own.’

The couple visited the Hewitt Centre in Liverpool in August 2019 and saw a consultant, which cost them £125.

‘Because we had our wedding coming up in December 2019 and a Caribbean cruise booked for our honeymoon, he advised us to wait because of the Zika virus risk,’ Natalie continued. 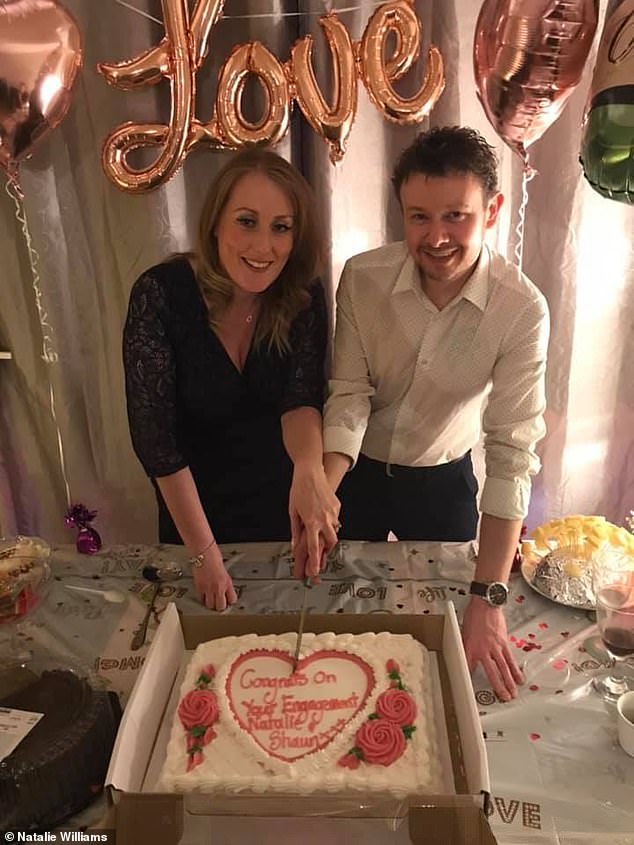 Shaun and Natalie, pictured at their engagement party, visited the Hewitt Centre in Liverpool in August 2019 and saw a consultant, which cost them £125

‘We were advised to wait three months post travel, so at the beginning of March we saw our consultant again, costing a further £115, and he advised blood tests and a semen analysis test.

‘All came back normal. My egg reserve was borderline, but there were no major issues and we could start on my next period.’

On March 16, Natalie called the clinic to inform them she had started her period and was told to collect her IVF medication on March 30.

Two days later she said she heard on the news that IVF had been cancelled, but claims she was told when she called not to worry as treatment for women over 40 was continuing.

‘A few days before our medication appointment the clinic rang and cancelled our treatment. I was completely devastated,’ Natalie said. 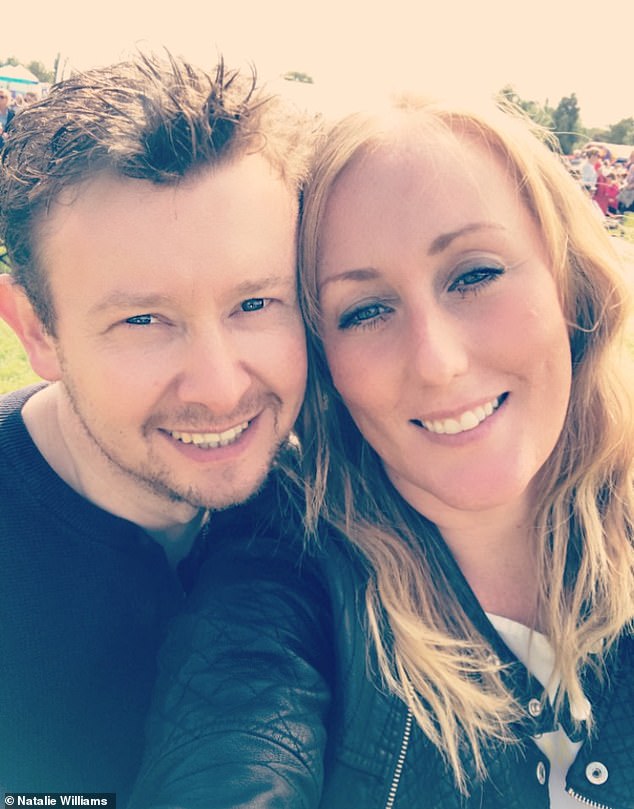 ‘We have heard nothing since from our clinic but were told as soon as they start again they will contact us and for us to watch the website for updates.

‘Other clinics have continued treatment and I’ve heard on Facebook pages that ladies have still had embryos implanted, even now in April. That’s upsetting to hear.’

However, while pregnancy can alter how the body handles severe viral infections in a small proportion of women, evidence gathered by the Royal College of Obstetricians and Gynaecologists suggests that expectant mothers are no more susceptible to the virus than the general population. 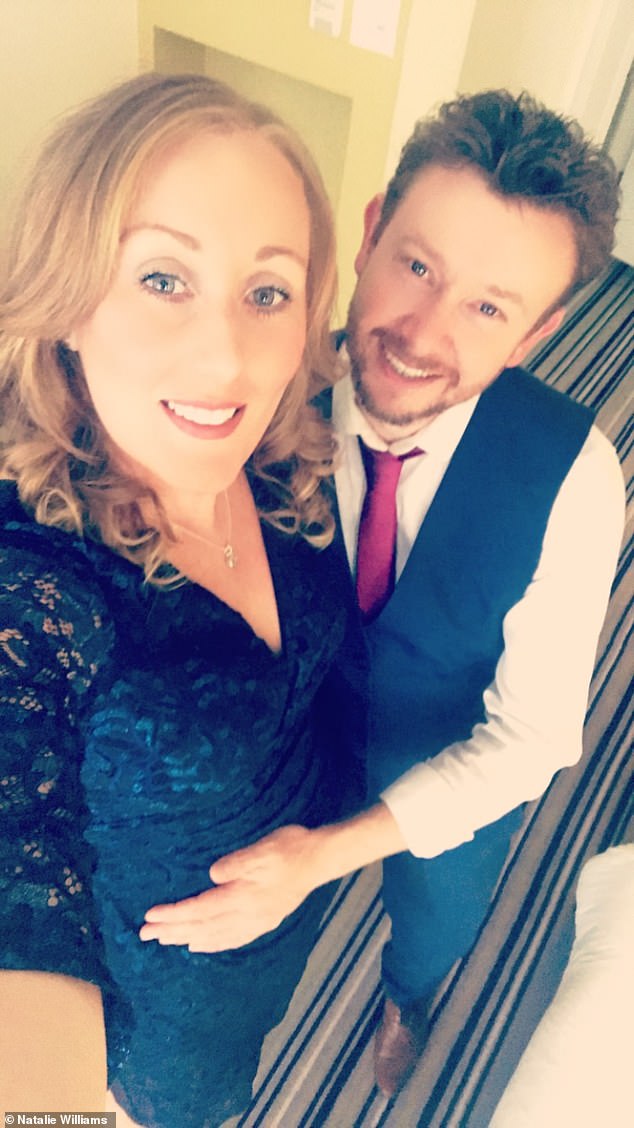 Natalie argued: ‘Many women will get pregnant naturally over then next few months and no one is telling them they can’t or mustn’t do so. We don’t believe it’s fair’

While clinics are able to complete fertility treatment for patients who are already mid-treatment, a large proportion, like Natalie, have been left heartbroken as their dreams of starting a family are left in limbo.

The decision to ban all treatments is likely to prevent the births of at least 20,000 desperately wanted babies should it remain in place for 12 months.

Calls to the charity Fertility Network UK’s counselling helpline have increased by 50 per cent in the past three weeks, and psychologists are warning that the shutdown is having a ‘devastating’ impact on the mental health of IVF patients and putting a substantial strain on the marriages of infertile couples, reports The Guardian.

What pregnant women need to know about coronavirus: Experts say there is no evidence an unborn baby can be infected during pregnancy

Pregnant women do not appear to be more susceptible to coronavirus than others and mothers are being advised to carry on breastfeeding, according to a new report.

The Royal College of Obstetricians and Gynaecologists have released new guidelines for pregnant women in relation to the coronavirus and have confirmed that there is no evidence the virus can be passed to an unborn baby.

As a precautionary approach, pregnant women with suspected or confirmed coronavirus when they go into labour are being advised to attend an obstetric unit – which has more doctors than a normal midwifery unit – for birth.

The world’s youngest coronavirus victim is a newborn baby in London, whose mother also tested positive for the disease after giving birth.

The mother was rushed to hospital with suspected pneumonia but her positive result was only known after the birth.

They were treated at separate hospitals – the baby at North Middlesex and the mother at a specialist infections hospital.

According to The Sun, the baby is now ‘out of danger’ and recovering well.

It is believed the baby was infected after the birth from coughs or sneezes and it was tested within minutes of its arrival.

The Royal College of Obstetricians and Gynaecologists has also advised that healthy babies should not be separated from infected mothers and can be breastfed.

Dr Edward Morris, President of the Royal College of Obstetricians and Gynaecologists, said: ‘As this is a very new virus we are just beginning to learn about it, so the guidance will be kept under regular review as new evidence emerges.

‘Over the coming weeks and months it is likely pregnant women in the UK will test positive for coronavirus. While the data is currently limited it is reassuring that there is no evidence that the virus can pass to a baby during pregnancy.’