EXPRESS INFORMER > News & Politics > Woman, 28, insists she should have the same flexibility as working parents for her DOG

Woman, 28, insists she should have the same flexibility as working parents for her DOG and claims owning a pet has made her realise ‘how hard mothers have it’

A woman has insisted employers should offer ‘dog mums’ the same flexibility as working mothers and says owning a pet has made her appreciate ‘how hard’ it is for parents in the workforce.

In a personal essay for News.Au, Mary – whose family owned dogs while she was growing up – admitted that she didn’t appreciate just how difficult having a pet of her own would be.

Just like parents leaving their children to go to the office, Mary says she also struggles with ‘mum guilt’ every time she leaves the house.

Mary Rose Madigan, 28, from Sydney, adopted her black chihuahua Frank last year. The writer says she can’t relax at work or during social events knowing that he’s probably missing her at home

Although she can technically leave Frank for several hours unattended, Mary says she can’t relax knowing that he’s probably pining after her at home.

As a result, the writer has enrolled him in a doggy daycare programme which costs $65 (£36) everyday.

However, the organisation issues an additional fee fines if owners are late for pick-up.

This has prompted Mary to call for employers to be give pet owners the ‘same flexibility and and understanding as mothers of human children.’ 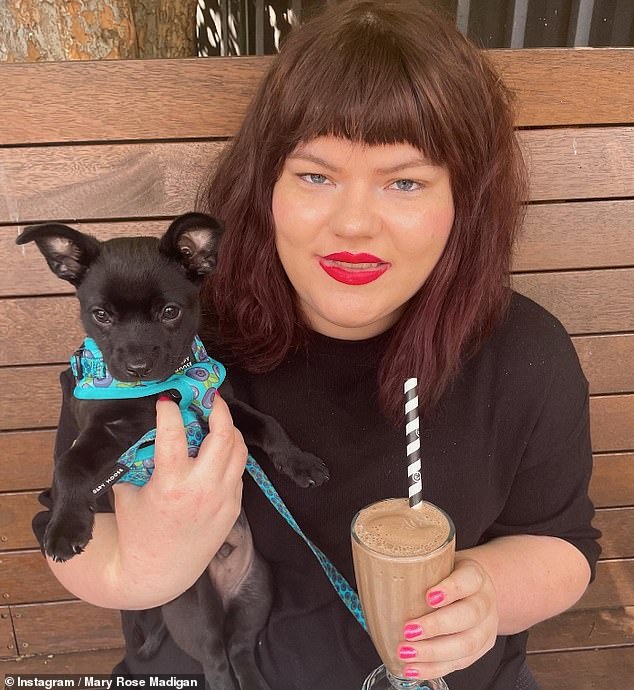 On top of this, Mary says she’s regularly started down social events if she can’t bring Frank because she ‘can’t bear to abandon him further’.

How long can you leave a dog alone?

According to the Blue Cross, dogs shouldn’t be left alone for more than four hours at a time.

However, young puppies shouldn’t be left for more than two hours.

Signs of separation anxiety in dogs include drinking excessively on your return from where they’ve been stress panting and following you from room-to-room.

She wrote: ‘I watch as working mums can head off early, introduce flexible hours or work from home more often with absolute envy.’

Despite being aware that she is in a very ‘privileged position’, Mary says she wants to push companies into extending these same rights for pet owners.

She added: ‘I know they aren’t children; I know I’m not a mum, and I can never understand the full extent of the burden, but I do love my dog more than I imagined was possible.’

Last year, the writer went viral when she opened up about her experience of dating while plus-size.

In an essay for MammaMia, Mary explained that there is a stigma surrounding plus-size women and dating, with people assuming they have greater difficulty finding a match than slimmer women.

However, she said she’s never had any problem finding a man, and her only issues is other people’s assumptions and expectations.

She said while discussing dating in her workplace a few years ago, it was never questioned why men were interested in the slim girls but her colleagues would make comments about her size.

The Mamamia writer claimed some women have been triggered by her confidence, saying: ‘I know it’s a tired trope but confidence is sexy, being yourself is always attractive and getting a date has nothing to do with your weight. I’m living, full- figured proof.’