Wolves 2-2 Tottenham (2-3 pens): Nuno Espirito Santo’s men squeeze through to Carabao Cup fourth round on penalties on his return to Molineux after visitors squandered a 2-0 lead

Harry Kane rediscovered his scoring touch ahead of the north London derby as Tottenham squeezed into round four of the Carabao Cup by beating Wolves on penalties.

Tanguy Ndombele and Kane put Spurs 2-0 up inside 24 minutes but Leander Dendoncker pulled one back before half-time and Daniel Podence equalised just before the hour mark.

Both sides wasted chances to win it and Ruben Neves hit the bar with a deflected strike with only two minutes remaining. Then Neves was one of three Wolves players to miss as Tottenham took the shoot-out 3-2, with Kane scoring their first kick as Nuno Espirito Santo made a second successful return to his former club after winning 1-0 here in the League last month. 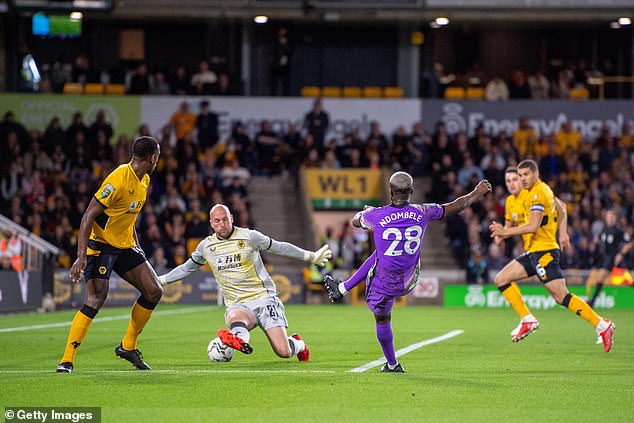 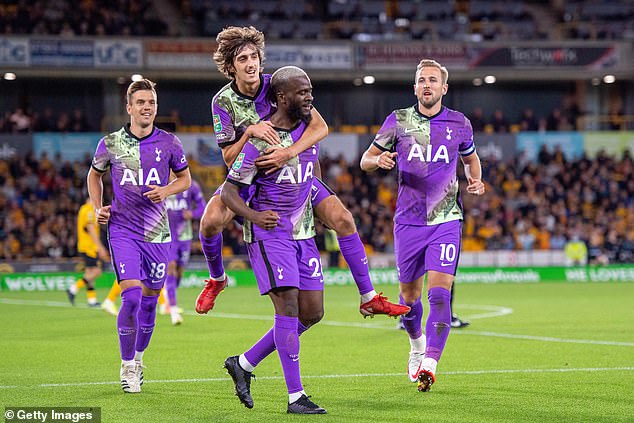 Feeling the pressure after three games without a win, Nuno picked a strong team including Kane, Dele Alli, Giovani Lo Celso and Cristian Romero, while his Wolves successor Bruno Lage retained only two players from the XI that started the 2-0 home defeat by Brentford.

The home side began brightly and Dendoncker’s clean strike from the edge of the box was headed away by Romero, before they suffered a setback when summer signing Yerson Mosquera was carried off on a stretcher in the ninth minute following a challenge with Kane.

Mosquera was replaced by Conor Coady and his slip helped give Spurs the lead. The Wolves captain’s attempted clearance rebounded off Ndombele, allowing the Frenchman to glide into the area and step inside Willy Boly before sliding the ball past John Ruddy. 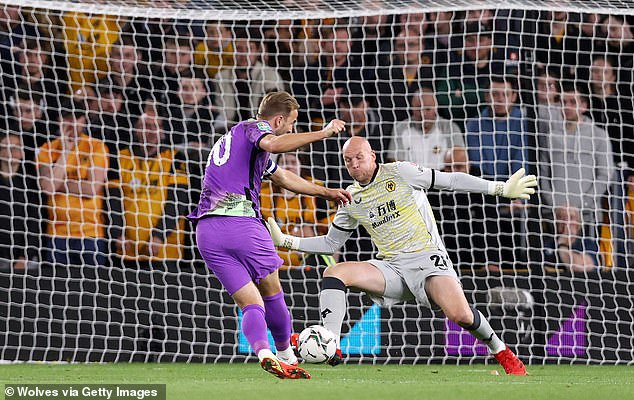 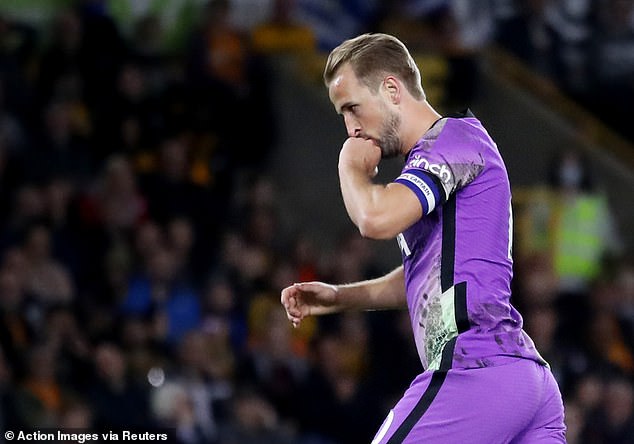 Kane had been targeted by Wolves fans and he found the perfect way to silence them in the 23rd minute. Racing on to Alli’s pass, Kane composed himself before driving the ball low into the bottom corner from 18 yards.

At this stage Wolves were in disarray and both Alli and Lo Celso could have increased Spurs’ advantage only for both to lose their balance when one-on-one with Ruddy.

Then Wolves rallied. Making his first start at Molineux, Hee Chan Hwang picked out Dendoncker with a left-wing corner and the Belgian sent a powerful header beyond reserve goalkeeper Pierluigi Gollini – their first home goal this season – and Fabio Silva might have equalised when Ki-Jana Hoever’s cross shot flew towards him but the Portuguese youngster could not adjust quickly enough to turn the ball in. 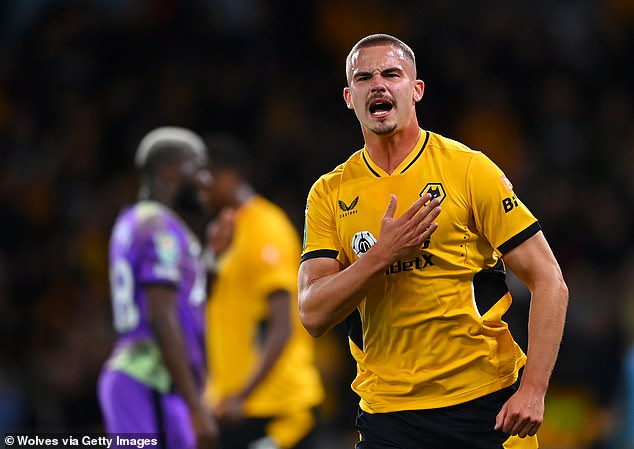 Wolves still looked frail at the back, however, and Japhet Tanganga lashed over the bar just before half-time after being played in by Kane. In first-half stoppage time, Hwang headed Dendoncker’s cross narrowly over.

Moments after the interval, Wolves were furious not to be given a penalty when Hwang tumbled under Romero’s challenge as he tried to convert Hoever’s low ball, and Ruben Neves was booked for protesting.

Ndombele nearly scored his second soon when his 30-yard effort produced a comical fumble from Ruddy, who was relieved to see the ball pass over the bar. 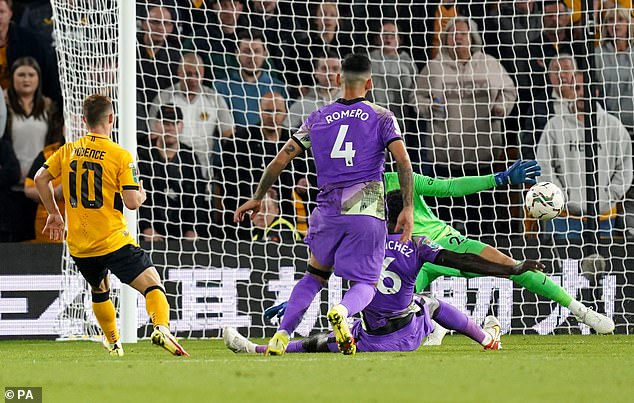 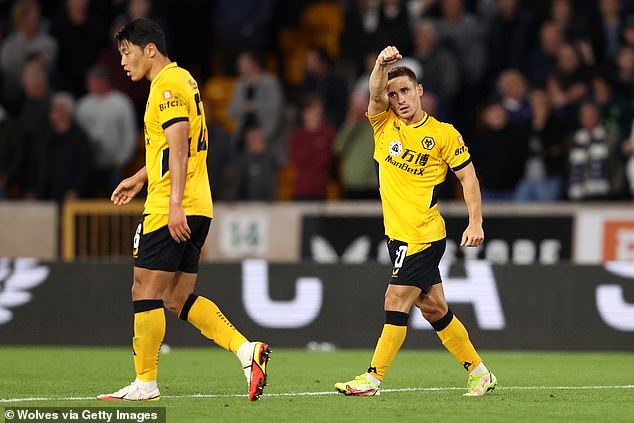 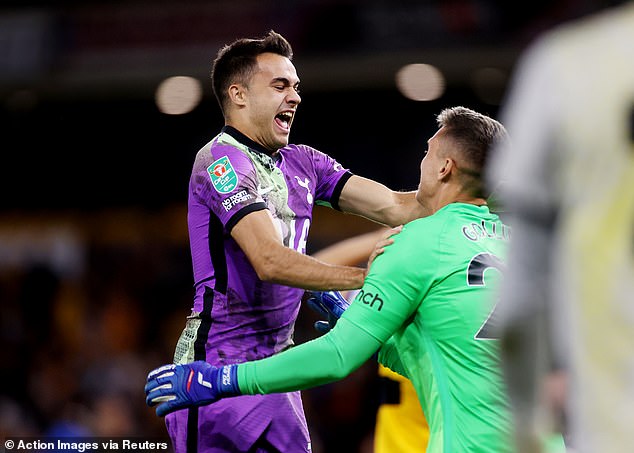 Wolves made the most of their escape to equalise just before the hour. Hwang robbed the dawdling Ndombele in midfield and Dendoncker collected the loose ball before finding Podence, who finished confidently across Gollini.

Both sides continued to create chances and Ruddy made an excellent save to stop the impressive Bryan Gil tapping in Kane’s cross. He did even better in the 67th minute, reacting brilliantly to push over Kane’s point-blank header from substitute Son Heung-min’s cross.

As both sides pushed for the winner, Neves’ deflected effort in the 88th minute clipped the top of the bar. Then Neves, Dendoncker and Coady all missed in the shoot-out for Wolves, with only Pierre-Emile Hojbjerg failing for Spurs.