Wizz Air expects to post a profit in the current quarter, despite warning that it will cut even more flights over the summer.

The budget air carrier anticipates terminating another 5 per cent of its planned flight schedule over the peak holiday period to try and avoid more cancellations, amid major disruption affecting airports across the UK.

This has largely been caused by staff shortages coming at the same time as the gradual loosening of international travel restrictions leading to a resurgence in demand for overseas travel.

Loss: Wizz Air reported today that it made a net loss of €450million (£381million) in the first quarter of the financial year covering the three months ending 30 June

Countless travellers have either seen their flights cancelled or faced long delays in getting through check-in, hampering the airline industry’s recovery from the devastation wrought by the coronavirus pandemic.

Wizz Air reported today that it made a net loss of €450million (£381million) in the first quarter of the financial year, covering the three months ending 30 June.

As well as the widespread disruption at airports, the Hungarian firm blamed the loss on cheaper ticket fares and a strengthening US dollar contributing €136million in foreign exchange losses.

It also attributed the loss to weaker fleet utilisation, which was around 10 per cent lower than historical levels, while surging oil prices meant the group’s fuel costs were far higher.

Following today’s trading update, Wizz Air Holdings shares had declined 3.2 per cent to 1,799.5p during the late morning on Monday, meaning their value has plummeted by over 61 per cent in the past six months.

The company said: ‘To be able to avoid cancellations and secure a more punctual operation to our customers, we have further improved the agility and resilience of our network, including adjusting schedules where we have seen a higher occurrence of issues. 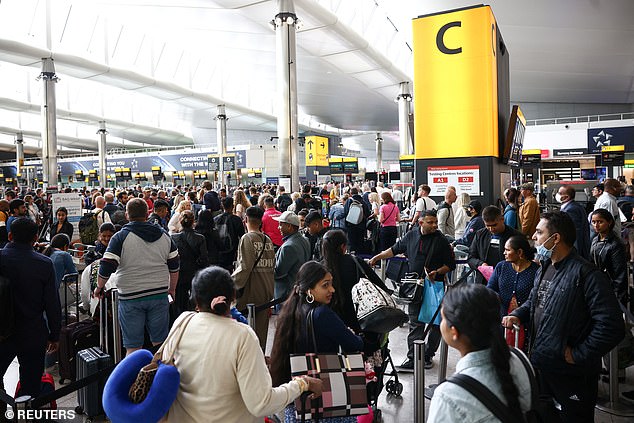 Disruption: Countless travellers have either seen their flights cancelled or faced long delays in getting through check-in, hampering the airline industry’s recovery

‘In total, for the peak summer period, we expect to reduce utilisation a further 5 per cent versus the plan outlined at the full-year results to reduce the impact of ongoing external disruptions.’

Yet the company forecasts bouncing back to a ‘material operational profit’ this quarter thanks to growing air fares and load factors – a measure of how much seating capacity is being used.

Amid escalating demand for flights and lower industry capacity, Wizz Air said load factors had surpassed 90 per cent as of this month, and it forecasts non-fuel costs per available seat kilometres to return to historical levels.

AJ Bell investment director Russ Mould said: ‘Ever the optimist, Wizz Air sees a much better second quarter, predicting that ticket prices will be higher, more people will be travelling, and non-fuel costs will ease back.

‘However, like many other airlines, Wizz Air is reducing its capacity this summer to ease pressures on airports.

‘There isn’t much else that Wizz Air can do beyond entering a price war to help fill its planes to maximum capacity. That seems unlikely given the trend across the sector is for air fares to go up.’

Heathrow warned separately on Monday that it would ask airlines to cancel more flights this summer if it does not believe previous schedule reductions will sufficiently reduce disruption.

Carriers were ordered by the Government and the Civil Aviation Authority last month to make sure their timetables were ‘deliverable’ after the sector was unable to cope with demand during the Platinum Jubilee half-term school holiday.

Heathrow admitted service levels have ‘not been acceptable’, with passengers suffering long check-in and security queues and problems with baggage handling on top of flight delays and cancellations.