EXPRESS INFORMER > News & Politics > Witnesses reveal battle to save life of boy, 13, after stabbing in Reading

Several people desperately tried to save the life of a 13-year-old boy murdered in playing field in Berkshire, witnesses said today as four boys and a girl were arrested.

The teenager was knifed in fields backing onto Reading Golf Club in the commuter suburb of Emmer Green yesterday and died at the scene after police were called.

One witnesses said they saw a boy on the ground with a number of people gathered around, trying to give him first aid – with the victim’s face looking ‘very white’.

Thames Valley Police said five teenagers aged between 13 and 14 were all being held on suspicion of conspiracy to commit murder. The victim has not yet been named.

Today, officers stood guard at police cordons erected at Bugs Bottom Fields, one blocking a road around it and another sealing off access to an open patch of grass.

One man said his wife was walking their dog through the park and saw a boy on the ground with several people gathered around, trying to give him first aid.

The man, who declined to give his name, said his wife said the boy’s face was ‘very white’. Today, some dog walkers had to turn back after seeing the police tape.

Another dog walker said she went through the fields at about 3.30pm yesterday and saw a group of youths standing near woods, describing it as ‘slightly unusual’.

She said the park area has been ‘heaving’ with joggers, walkers, metal detectorists and families in recent weeks. 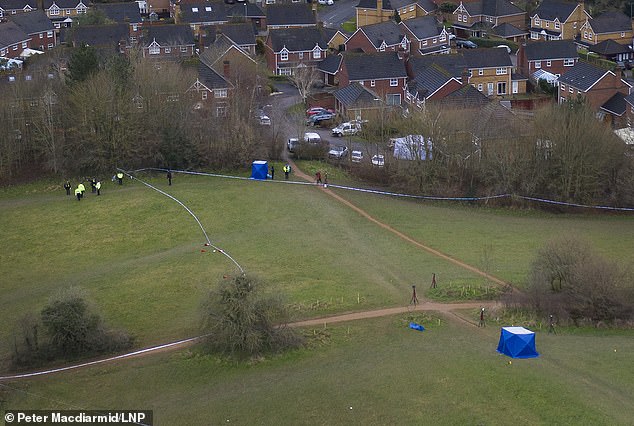 Local resident Sue Borton, 77, said today: ‘The first we saw of the murder was all the police cars going up and down.

‘The last year was such an awful year and now this has happened already – I can’t imagine what the victim’s family are feeling.

‘There are more young families now than there has ever been living in the area. I wouldn’t have walked for a while had they not made those five arrests this morning, I would have been very cautious.’

Another resident John Craggs, 73, whose home is yards from the cordon, said: ‘From my dining room window I could see lights up in the field yesterday afternoon. 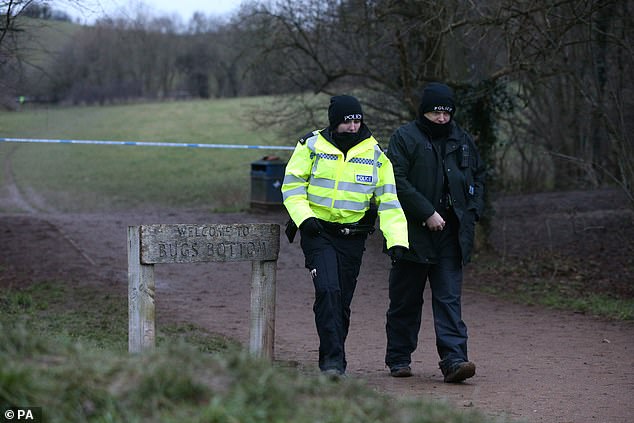 ‘I came out and there was a helicopter just sitting there. It is a shocking that it is on my doorstep, I have always thought of this as a respectable sort of area.

‘It is not the sort of thing you expect to see around here. Everybody around here goes for walks especially during lockdown, it is supposed to be a safe place to go.’

Father-of-three Igor Samoylenko added: ‘It is truly terribly, we normally take the dog for a walk around the area. I have three children of my own, my youngest is aged 12 years and it is quite upsetting and frightening.

‘My middle daughter is at Highdown School, they have heard through their own channels that something has happened.’ 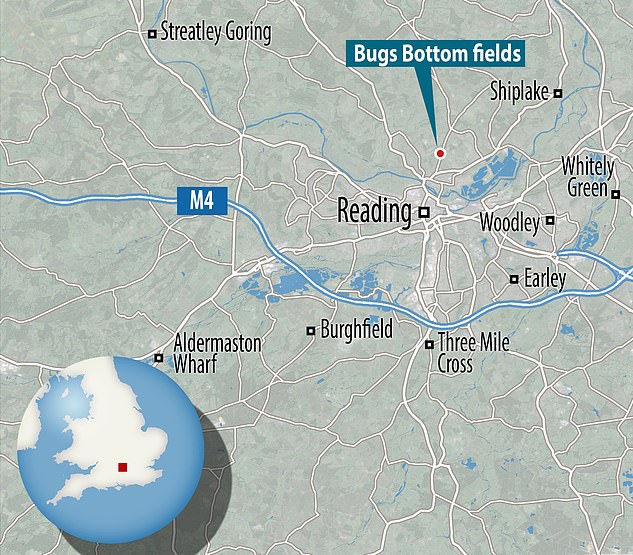 Overlooking the murder scene, university student Callum Hopcutt said: ‘I’m a bit shaken up about it. I’ve come back from university to my own area which is supposed to be safer, but seeing that is a bit shocking.’

Neighbours said that the schoolboy was a pupil at Highdown Secondary School, alongside his sister.

Rachel Cave, headteacher at the school, said today: ‘The Highdown community is reeling from the tragic news that a 13-year-old boy was stabbed in Emmer Green.

‘This student was part of our community and many students and staff knew him well. For a life to be ended at such a young age is a total tragedy. Our thoughts and prayers are with his family. 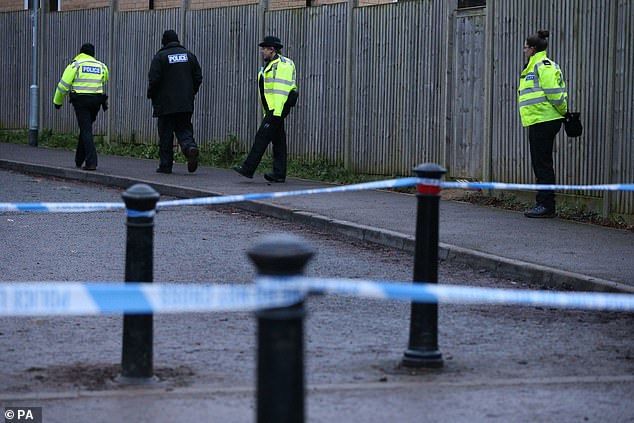 ‘Many have been deeply affected by this tragedy. In normal circumstances we would open the school and welcome in students for support before the start of the term.

‘We are currently unable to do this of course but are arranging counselling support and will be establishing an electronic book of condolence.

‘Highdown is a supportive and close-knit community, we will work together over the coming days and weeks. We are, of course, working closely with our police colleagues.’

Another local resident said: This is a really nice area, I have lived here nearly 30 years and nothing like this has ever happened before. 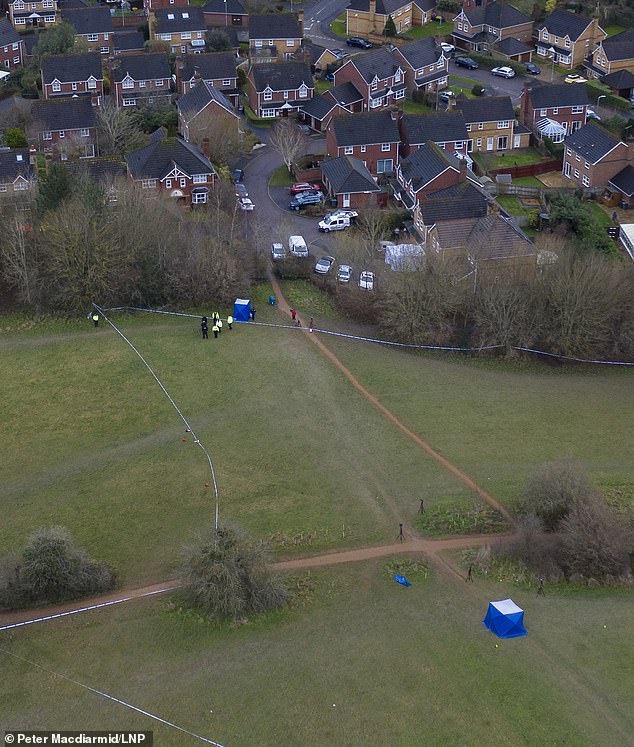 The teenager died at the scene after police were called. Bugs Bottom fields are pictured today

‘Bugs Bottom fields are an area we walk in frequently, as a lot of people around here do.’

And a local dog walker said: ‘My granddaughter knew the victim and his sister because she went to the same school, Highdown Secondary in Caversham.

‘I am absolutely horrified, I couldn’t sleep last night I just kept thinking about the parents of this poor boy.

‘I was down there with my dog 30 minutes before the attack, it is a lovely area.’

Police believe people may have witnessed the ‘dreadful incident’ or may have seen the attackers who they believe fled towards a housing estate. 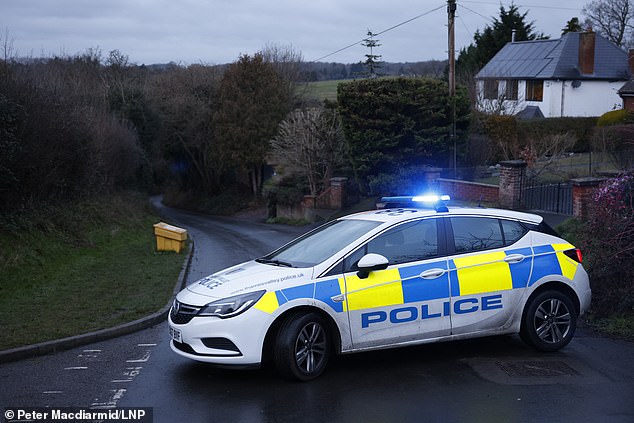 The fields flanked by housing estates are used extensively by dog walkers, who police have specifically appealed to for information.

Officers have also appealed to anybody driving or cycling in the area to check any dash-cam footage taken between 3pm and 4.30pm yesterday. 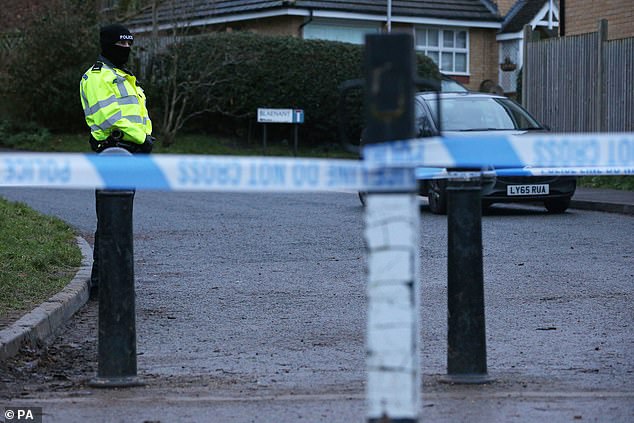 Reading East Labour MP Matt Rodda tweeted: ‘I would like to offer my deepest condolences to the family of the boy who was killed in an incident in Emmer Green yesterday. Please contact Thames Valley Police if you have any information.’

Residents were told to expect a very considerable police presence in the area for a ‘number of days’ as the investigation continues.

Emmer Green is a popular commuter village for people working in London. House prices average around £600,000.

Anyone with information is asked to call police on 101 or Crimestoppers anonymously on 0800 555111.