British stars Emma Raducanu and Andy Murray are among the British players kicking off their Wimbledon campaigns on Centre Court today, marking the first day of this year’s hotly-anticipated tennis Championships.

For any tennis player, a match on Centre Court is a highlight of the annual calendar – not only is it the biggest stage at the world’s most prestigious tennis tournament, but a chance to perform in front of distinguished guests, including the Royal family.

However, whether or not it’s the best place to secure a win for homegrown tennis stars is another matter.

Researchers at IBM, the official technology partner of The Championships, have trawled through 21 years of data to find the Wimbledon court with the best British win percentage so far this century.

The data covers all Gentlemen’s and Ladies’ singles matches on all Wimbledon courts going back to 2000, when IBM’s records start, captured using its IBM Watson AI software.

Court 8 and the now retired Court 19 were revealed as the ‘luckiest’ courts, because they have the highest win percentages from multiple British matches (60 per cent and 66 per cent, respectively).

However, Centre Court is not far behind, with a win percentage of 57.6 per cent.

Wimbledon scientists reveal the court with the best British win rate since 2000. The data covers all Gentlemen’s and Ladies’ singles matches on all Wimbledon courts going back to 2000, when IBM’s records start, including two retired courts (Court 13 and Court 19, locations marked in pink) 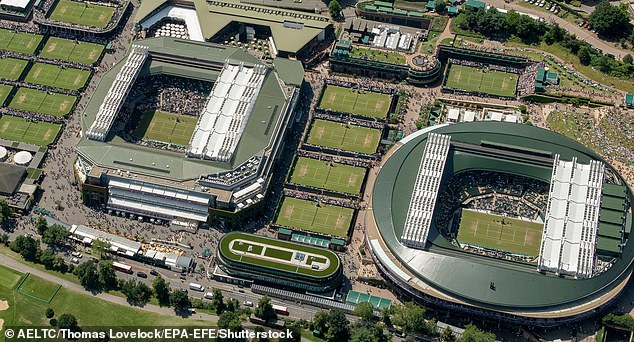 Is Centre Court really the best place for a British win? Scientists trawl through 21 years of Wimbledon data to find the luckiest court for homegrown players. Pictured is Centre Court (left) and Court 1 (right)

For a British tennis player, it’s possible that the pressure that comes from playing at Wimbledon’s Centre Court can adversely affect their performance.

On a smaller court meanwhile, such as Court 8, a player may be less distracted by the audience, and can better concentrate on their gameplay.

Conversely, British players in the past are thought to have benefited from a vociferously supportive home crowd, such as Andy Murray when he won The Championships in 2013 and 2016.

Jo Durie, former British No. 5 and a two-time semi-finalist at Wimbledon, told MailOnline that the court a British player plays on usually depends on if they’re seeded or a wildcard – someone invited to play even if their rank is not adequate.

‘Usually about six Brits get a wildcard and their ranking wouldn’t get them in, so whoever they play is meant to beat them,’ Durie said.

‘If they’re playing quite a high seed and they’ve never really experienced much at Wimbledon they’re usually put on Court 2 or 3.

‘That’s probably why those percentages are a little bit lower.’

WHICH WIMBLEDON COURT HAS THE GREATEST BRITISH WIN PERCENTAGE?

Durie also said she was surprised that the British win percentage on Centre Court is as high as it is (57.6 per cent) because British players don’t often get to the very sharp end of the tournament.

Dan Travis, a tennis data specialist based in Brighton, also said Brits who are having a good run will be put on Court 1 and Centre Court.

‘Playing on Centre Court creates great external pressure and can be used to a player’s advantage and can be a great “leveller”, but remember upsets are rare in tennis,’ he said.

‘[Tim] Henman also had a 76 per cent win rate at Wimbledon, where almost all his matches were played on Centre Court. Murray’s win rate is even better and he is exclusively Centre Court.’

Because Centre Court is usually prioritised for matches with British players, it has a far greater proportion of British results compared with the other courts, many of which are mostly used for practice although they do host competitive matches.

The results show Court 9 has a 100 per cent British win record; however, it’s only hosted one British match since the IBM records began, so it cannot be considered truly lucky quite yet.

This match on Court 9 was Aljaž Bedene (who played with a British nationality from 2015 to 2017) against Frenchman Corentin Moutet in the first round of 2021. 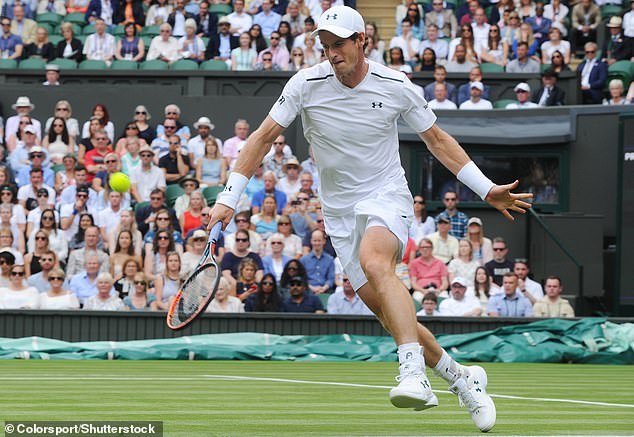 British stars Emma Raducanu and Andy Murray are among the tennis players set to kick off their Wimbledon campaigns at Centre Court on Monday. Pictured is Murray on Centre Court during his first round match versus Alexander Bublik (Kazakhstan) in 2017

Meanwhile, the unluckiest courts were found to be Court 5 and Court 15, both of which have a win percentage of zero.

Court 5 is the unluckiest overall – it has hosted nine matches involving British players since 2000, but all of them were British losses.

One of the high profile losses on Court 5 was Daniel Evans losing to German Florian Mayer in four sets back in 2011.

Interestingly, there’s only been one match between two British players since 2000 – Naomi Broady versus Anne Keothavong on Court 12 in the first round in 2011.

Both were included in the data but essentially cancelled each other out and so did not affect Court 12’s win percentage. 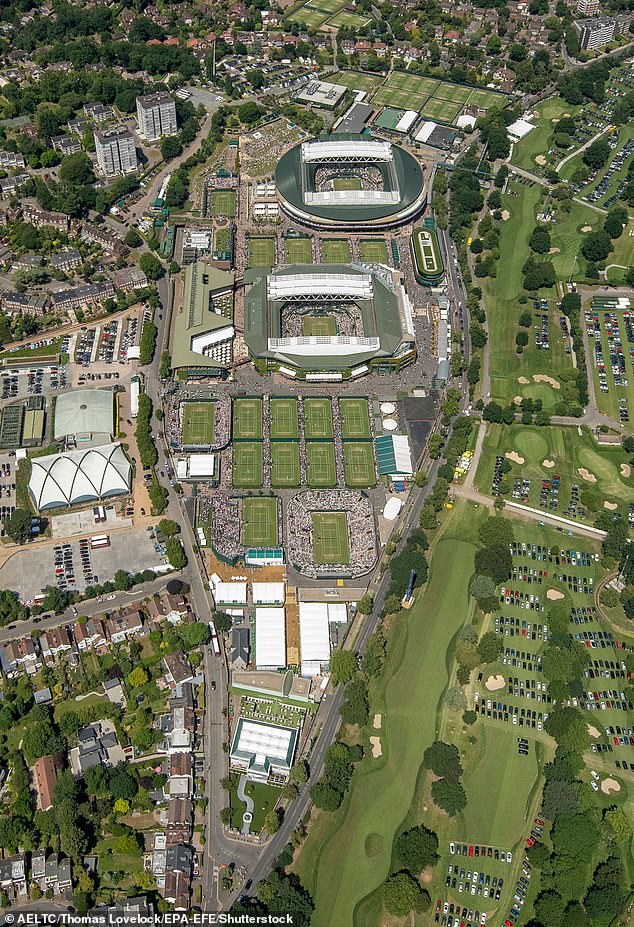 Today there are 18 active competitive courts at Wimbledon. But also included in the data was two former courts – Court 19, which was situated right next to Court 1, and Court 13, which was where Court 2 is now

For example, Centre Court only has a win percentage of 23.1 for female players.

Meanwhile, Court 19 has an 100 per cent win rate for the British Ladies, although it has only hosted two matches.

For the British Gentlemen, Centre Court has a decent win rate of 65.8 per cent, while Court 5, Court 7, Court 11 and Court 19 all have win rates of zero.

Researchers at IBM Match Insights team said that some of the courts have moved or changed names since the records began in 2000, while others no longer exist.

For example, the old number 2 Court, also known as the Graveyard of Champions as many former champions fell to defeats there, used to be where Court 3 now is.

IBM’s AI system, Watson, is used every year at Wimbledon to give visitors match insights – including who is most likely to win upcoming matches, based on factors like past performance.

Watson is also being used to sift through audio and video of Wimbledon matches to decide which points were worthy of inclusion in a highlights package, based on factors like crowd noise and player expressions.