By Ian Hebert For Mailonline

Ons Jabeur’s description of being invited to become Serena Williams’ doubles partner sounded like a personal struggle with imposter syndrome.

‘If she had asked me the same thing two or three years ago, I would have played horribly and not handled the pressure,’ the No 3 seed related on Monday. ‘Tennis is a tricky sport. You can lose every week, which is not fine. I know about struggling with confidence.’

The Tunisian’s emphatic first round win over Swede Mirjam Bjorkland, which offered hints that she may play a memorable part in the next two weeks, suggests the worst of those doubts are in the past.

Becoming the first African and Arab woman to reach the last eight here, last year, and subsequently the first to make the world top 10, have both helped. Last week she became the new world No 2.

But it is clear that partnering Williams on her return to tennis at Eastbourne last week has been significant. ‘She picked me to be her partner and playing alongside Serena, you’re gainlng a lot of confidence.’ the 27-year-old said. ‘Being a leader on court is what I want to be.’

She was against Bjorkland, the world number 125, mixing punched forehands on a minimal back-lift – a big part of her game – with her trademark drop shots. No-one on the women’s tour executes those to better effect. 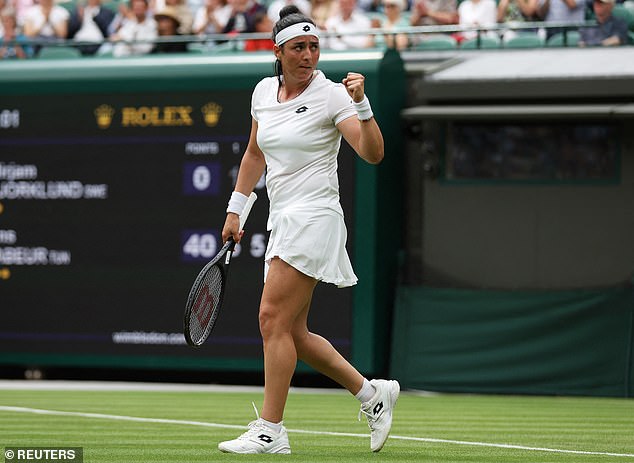 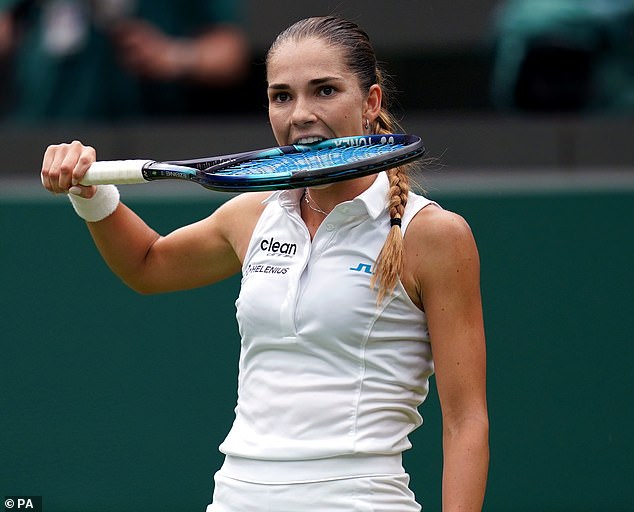 Her distinctive crowd-pleasing slice, which has the hallmarks of a squash shot and earned the nickname ‘Roger Federer’ in her junior days, was also in evidence.

A drop shot sealed the first set before Bjorkland could register a punch. A string of unforced Jabeur errors towards the end of the second handed the Swede a break-point.

She was unfortunate to be on the wrong end of a faulty line call at 30-40, with the replayed point allowing Jabeur to rescue herself. The diminutive North African ran out a comfortable winner in just 54 minutes.

A small Tunisian flag was waved on Number One court and there is certainly pressure attached to carrying the hopes of a nation and a continent. She blazes a trail for both. 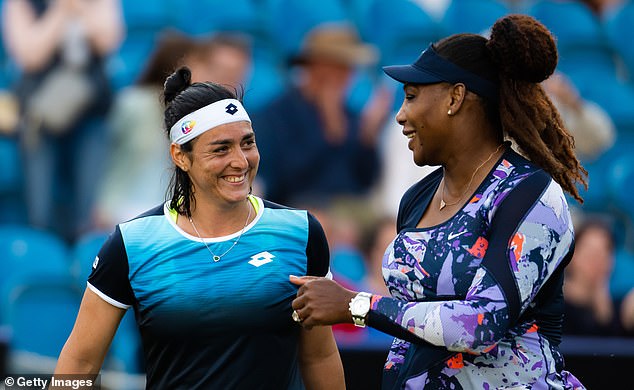 The weight of that revealed itself when she lost in the first round at the French Open, having been tipped for the title. ‘I don’t like to make the same mistake twice,’ she said after navigating this first round.

The expectations that Jabeur can take her unique set of skills deep into the tournament are in part borne of the fact that she beat top seed Iga Swiatek here, last year. But having struggled for so long to be a challenger, she is not afraid of discussing overhauling the Pole to become the world No 1.

‘It’s going to be difficult, if not impossible, obviously,’ said Jabeur, who will play either big-serving Canadian Rebecca Marino or qualifier Katarzyna Kawa next. ‘But you never know. The most important thing I want to have is the level of No 1,’ though. ‘I don’t just want to be the No 1.’