Willie Nelson’s Tennessee home, which was listed four months ago, has officially been taken off the market after selling for $2.14 million.

The 89-year-old country star, who recently made a guest appearance alongside Dolly Parton during her recent Christmas special, drew inspirations for his hit song, Shotgun Willie, from a fire that occurred at the cabin.

The three bedroom house that is surrounded by a scenic landscape was hand-built by the Country Music Hall of Fame singer himself, and is situated just 30 minutes outside of the bustling city of Nashville.

Sold! Willie Nelson’s, 89, Tennessee country home has officially been taken off the market after being sold for $2.14 million; the singer seen in September 2022 in North Carolina

The inviting home was initially listed in October 2022 for $2.5 million, and officially sold for around $2.1 million.

Since building the rustic getaway with his own hands, ‘the only individuals that have ever lived in the cabin include the country legend himself, and the current tenants,’ according to People.

Nelson’s former home sits on a whopping 150 acres of land, and is surrounded by lush greenery, trees, a barn, and a few ponds.

The exterior of the cabin is comprised of both crafted, log pieces and stone details on the steps, the base of the porch and also the chimney.

The stairs lead up to a large, wooden porch that can easily fit chairs to give residents the perfect opportunity to relax and look out at the surrounding, naturistic views. For a unique touch, a red roof could be seen on top of the home.

Upon entering, a comforting and cheerful living room directly connected to a kitchen could be seen, with the walls made of log details. Exposed wooden beams and a vaulted ceiling offer a warm feeling for residents.

Off the market: The log cabin, that was built by the country icon himself, was put on the market in October 2022 for $2.5 million 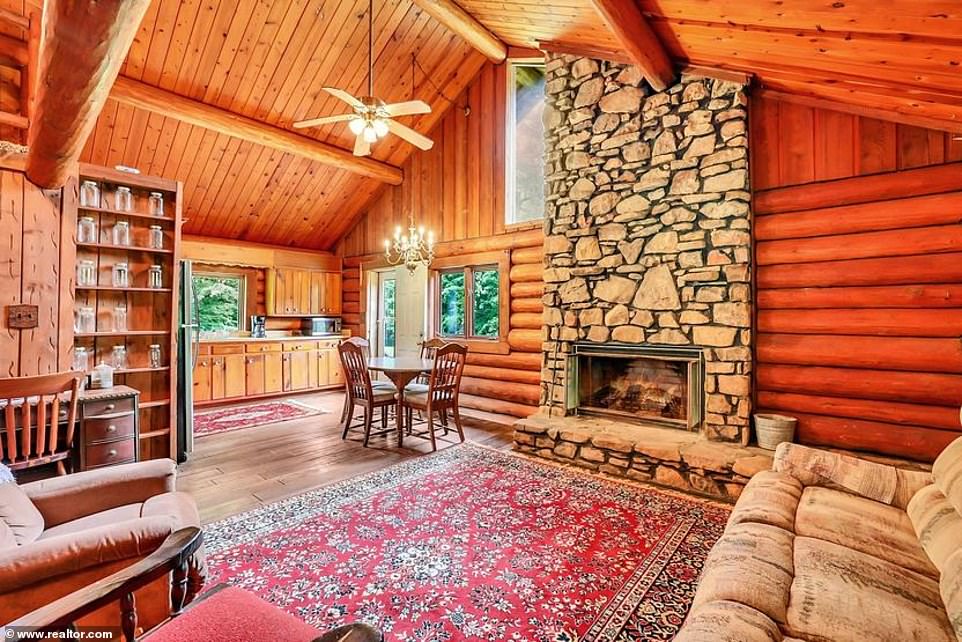 Inviting: Upon entering the home, residents are welcomed by a warm and bright living room which is directly connected to a kitchen 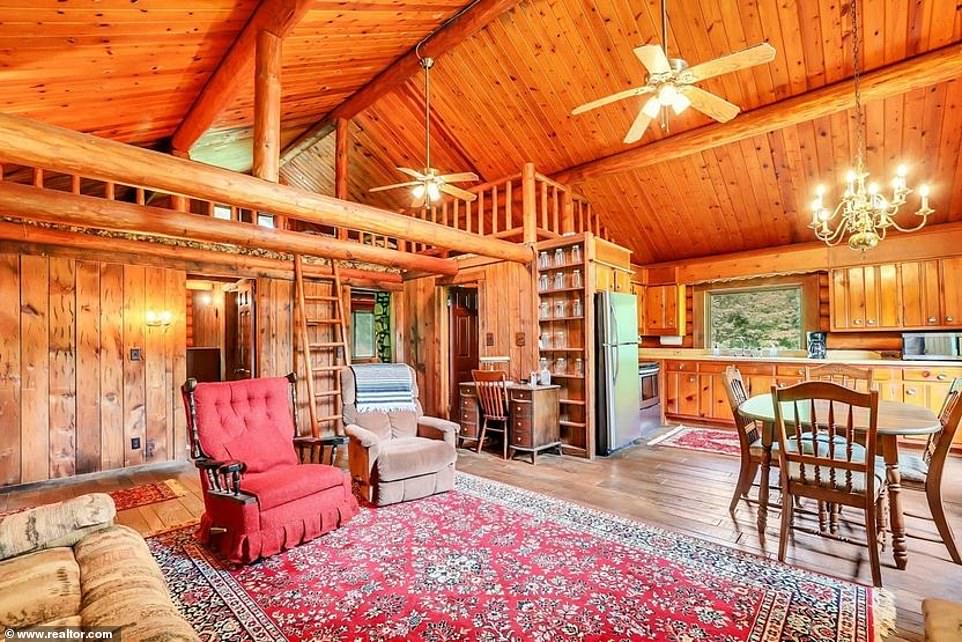 Details: The wooden ceiling and exposed wooden beams after a homey, country feel to the cabin

The kitchen cabinets and storage are also made of classic wood, with numerous windows offering plenty of natural light to flow inside.

Light fixtures on the ceiling include a retro-inspired, gold chandelier situated over the kitchen table. Two separate ceiling fans were also added, with wooden blades to coincide with the theme of the home.

A large Persian red rug is placed in the middle of the living space, along with a smaller, rectangular matching rug near the entryway.

A ladder could be seen placed on the wall, leading up to a loft area on the second level that currently acts as a third bedroom. The interior also contains one bathroom.

The fireplace is a main focal point in the cabin, and is made entirely out of stone, providing a 1970s feel to the room. 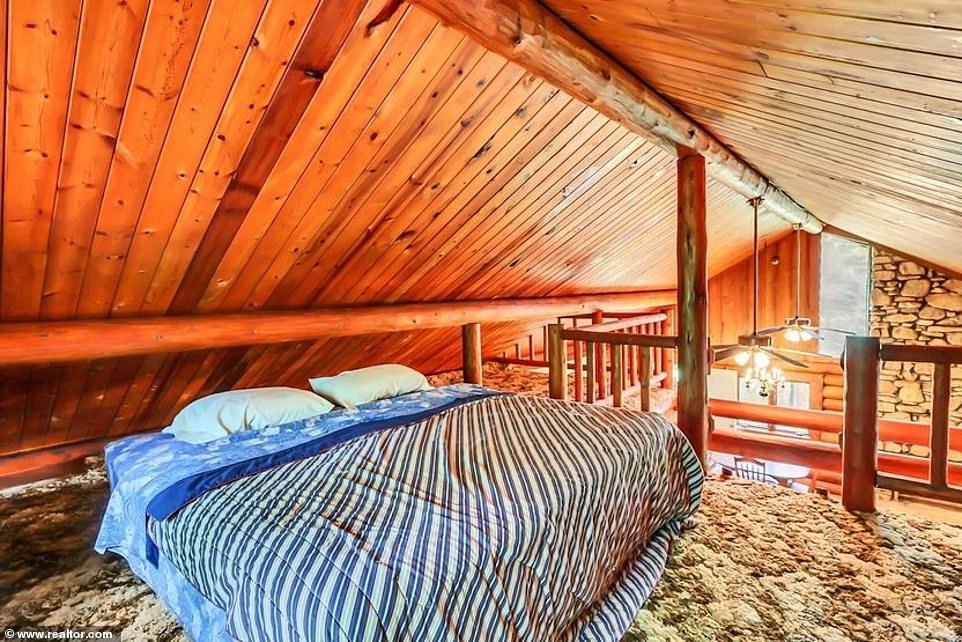 Loft: The second floor loft, which can be reached with a wooden ladder, currently acts as a bedroom in the house 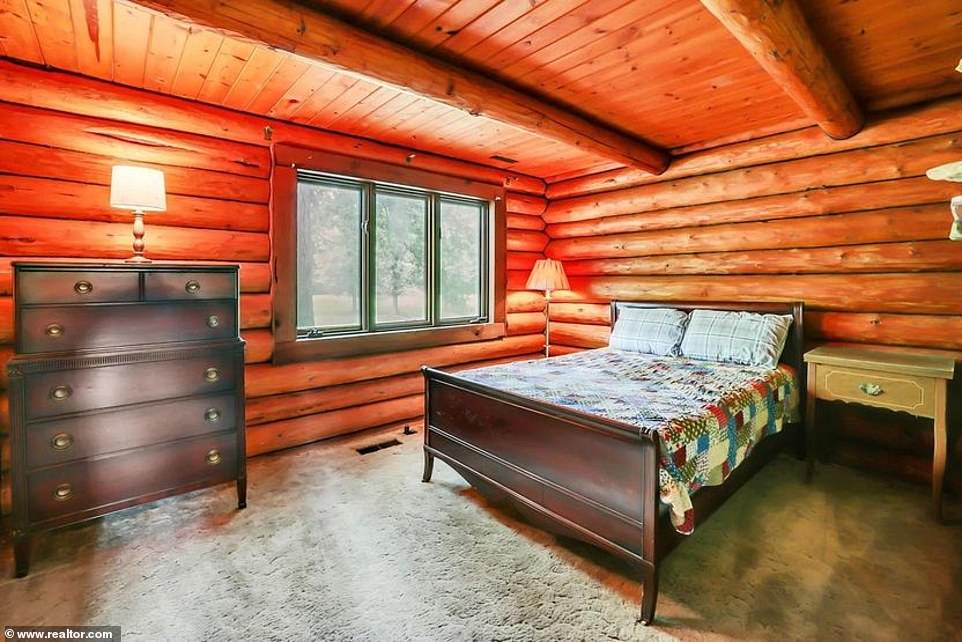 Spacious: The interior of the home contains a total of three spacious bedroom and also one bathroom 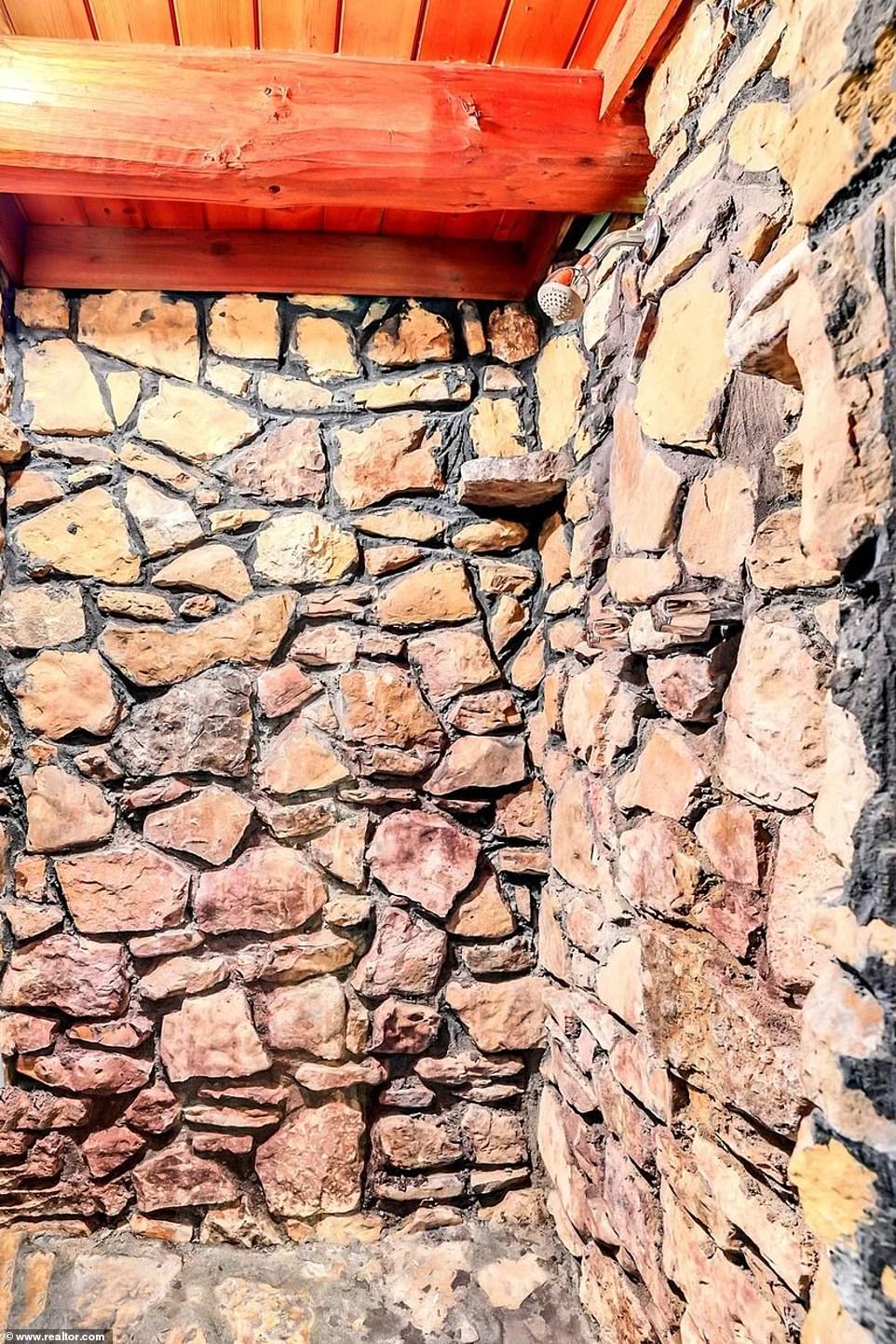 Retro details: Along with wooden details, the cabin also is made of stone details, including the stone fireplace located in the living room

The land surrounding the home also contains a wooden barn that is surrounded by shady trees and fields of grass with rolling hills in the distance.

An aerial view better showcases the amount of land offered to the new residents of the iconic home, which offers a peaceful and secluded getaway from city life.

A fire notably occurred at the home in 1970, and upon returning to see the cabin engulfed, Willie braved the flames to retrieve his guitar named Trigger, along with a pound of marijuana.

Following the incident, the country singer was later given the nickname of Shotgun Willie, which became the inspiration behind the hit track and studio album of the same name that was released in 1973. 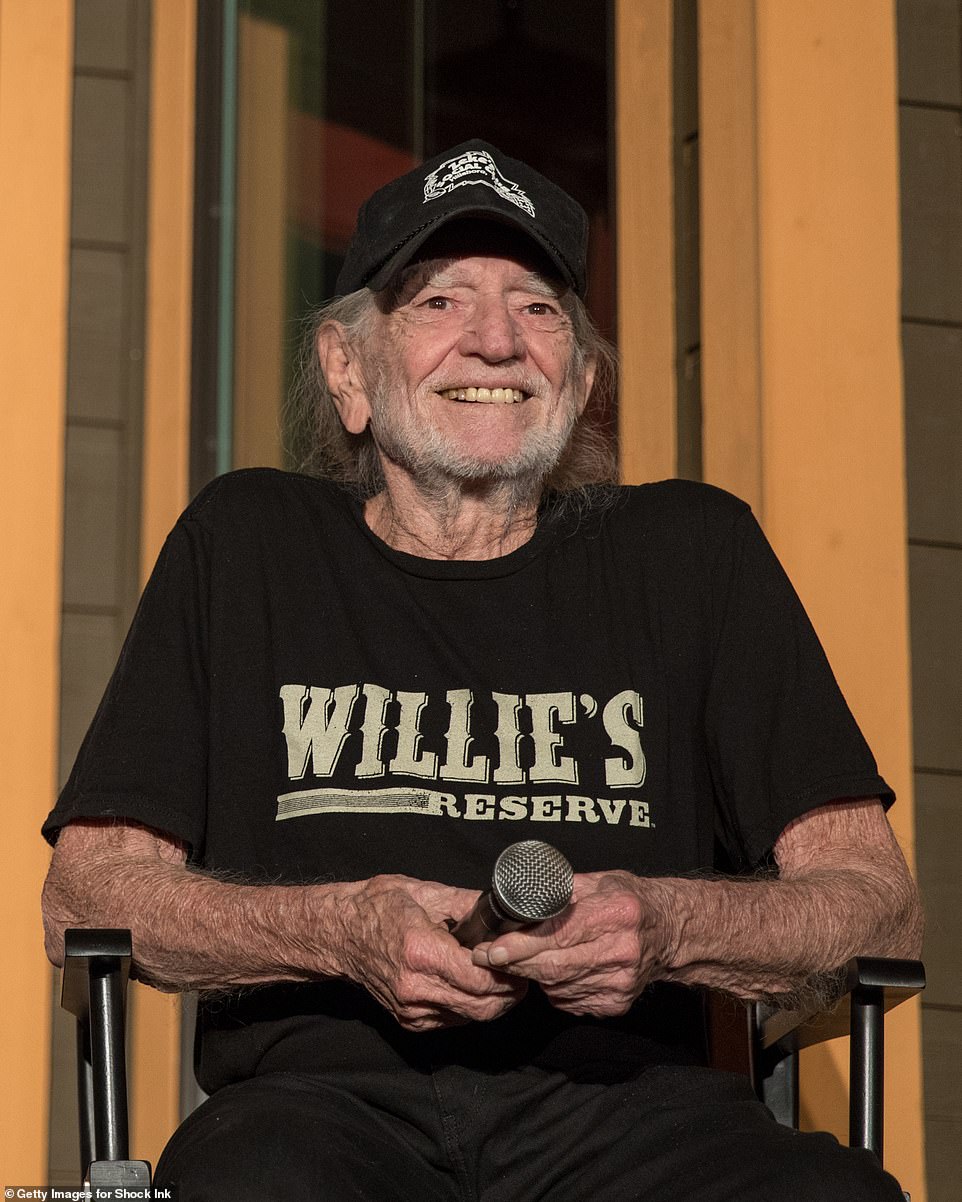 Original inspirations: A fire that occurred at the singer’s former home in 1970 inspired Willie’s hit track, Shotgun Willie, and an album of the same name; seen in 2019 in Texas 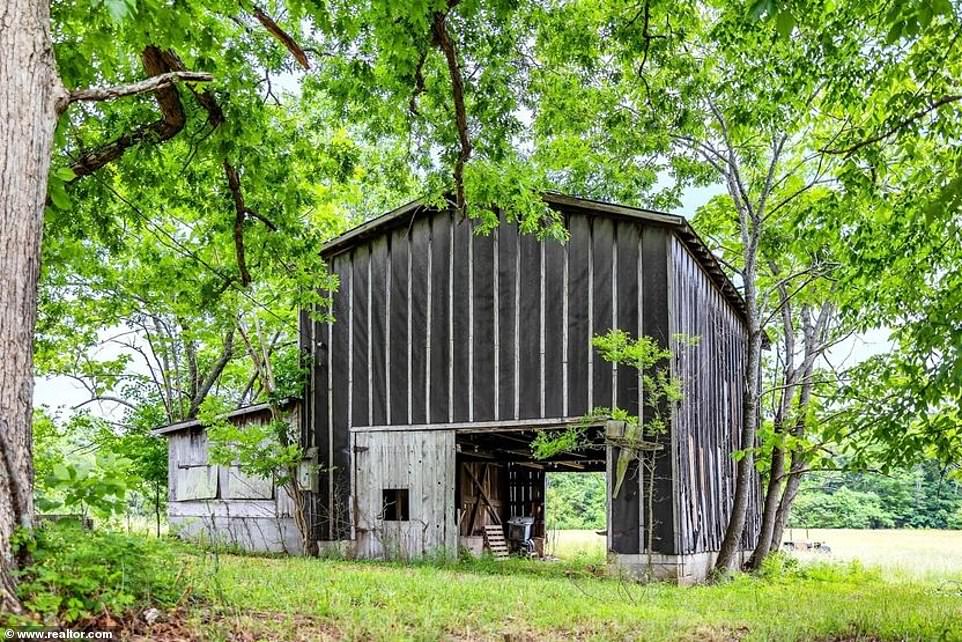 Near the cabin: The exterior area surrounding the house also contains a wooden barn that is surrounded by shady trees and fields of grass and rolling hills in the distance 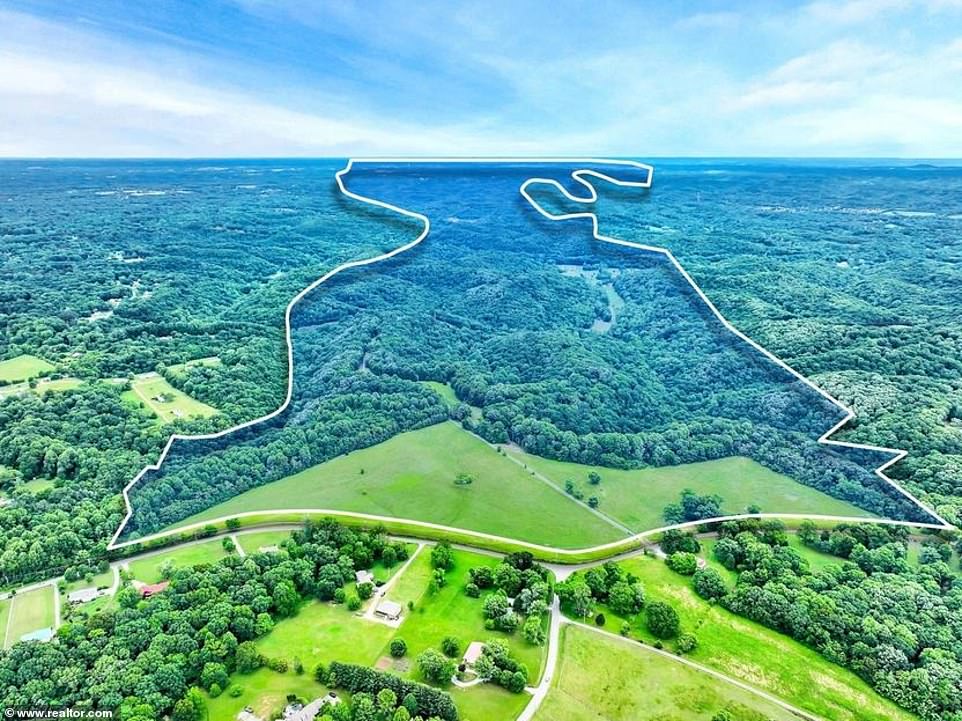 The land: Willie’s former home sits on a whopping 150 acres of land and is located just 30 minutes outside of Nashville

Willie, who will celebrate a milestone by turning 90-years-old this year in April, will soon be seen on the big screen.

A five part documentary titled, Willie Nelson And Family, will officially premiere at the 2023 Sundance Film Festival later this month on January 20.

According to the festival’s website, the documentary which was made by award-winning filmmakers, Thom Zimny and Oren Moverman follows, ‘the highs, lows, and in-betweens of Willie’s personal life and professional career.

A press release for the film stated that ‘alongside close friends and family who have accompanied him on a remarkable journey, Willie tells his story in his own voice’ in the film, billed as the ‘first authorized work exploring the life’ of Nelson. 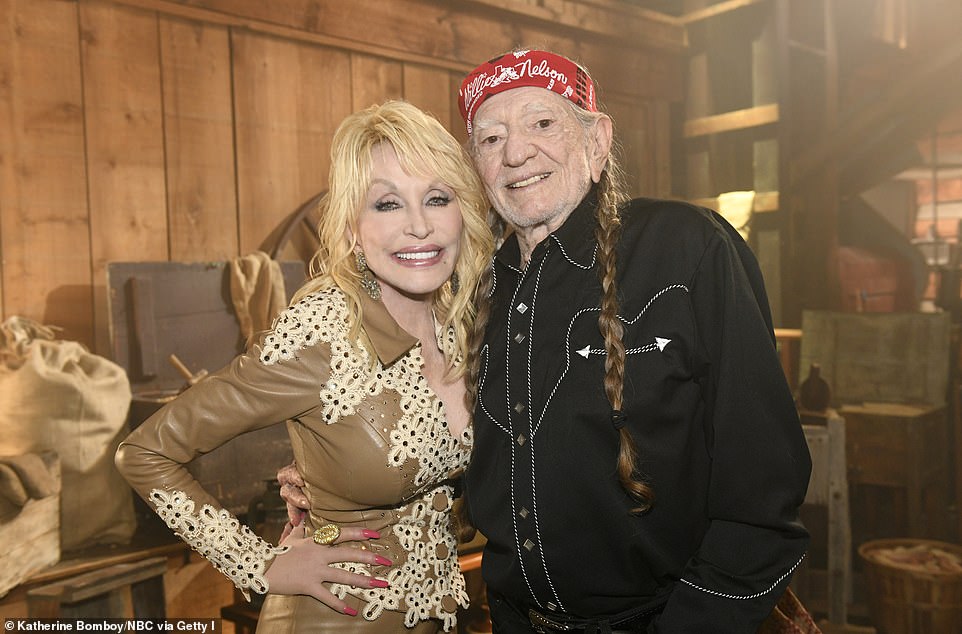 Hard-working: The Grammy winner has been keeping to a busy schedule, and recently joined fellow country icon, Dolly Parton, during her Christmas special last month in December