Police may have to rethink the timeline of William Tyrrell’s disappearance after CCTV photos of a local man leaving the Kendall tennis club suggest the boy may have gone missing up to an hour earlier than originally thought.

Time stamps on the photos show Richard Donoghue – who lived 270m from William’s foster grandmother – left the tennis club after overhearing a call to a local policewoman at the club.

Mr Donoghue later told police the call, which came in  just before he left the club at 9.43am on Friday, September 12, 2014, made him ‘think there was a  child missing’.

‘I cannot recall if she said where the child was missing from,’ he said in one of three interviews with police after William Tyrrell vanished.

The call to policewoman Wendy Hudson and Mr Donoghue’s departure from the club, which was caught on CCTV, happened around 45 minutes before William’s foster mother states William disappeared.

And it was also more than an hour before the foster mother made the Triple-0 call to report that the three-year-old had vanished.

‘I am not here to accuse anybody,’ she said, ‘I am here going over the things I think have not been and should be looked at’.

She said the William Tyrrell inquest ‘needed to recall’ witnesses, including the policewoman Mr Donoghue spoke to that morning.

Mr Donoghue was interviewed three times by police, but never called on to give evidence before NSW State Coroner Harriet Grahame.

(Richard Donoghue should not be confused with Robert Donohoe, of Taree, a convicted paedophile who did testify.)

Richard Donoghue’s BMW was still at the tennis club at 9.42am, which police say is the real time and the CCTV was set nine minutes early

In an interview with a detective at Laurieton police station in February 2017, his third police interview, Richard Donoghue says he arrived at Kendall Tennis Club around 8.10am on the morning in question.

In that interview, he was shown CCTV images of himself and his car at the Kendall Tennis Club that same morning.

The interview, a second re-canvass of his original police statement in September 2014, includes a statement about why he left the tennis club that morning.

‘The reason I came to leave the tennis club what that Wendy Hudson, who I knew was a police officer, received a telephone call on her mobile telephone,’ Mr Donoghue said in the statement.

Ms Hudson did not play tennis with Mr Donoghue at the club that morning and was not on duty at the time.

‘I saw her using the telephone. I do not know where we were standing other than being somewhere within the precinct of the tennis courts.

‘After Wendy finished the call I heard her say something to make me think there was a child missing.

‘I cannot recall if she said where the child was missing from.

‘Wendy said she was going. I cannot recall if I left before or after her, however left shortly after that call.’ 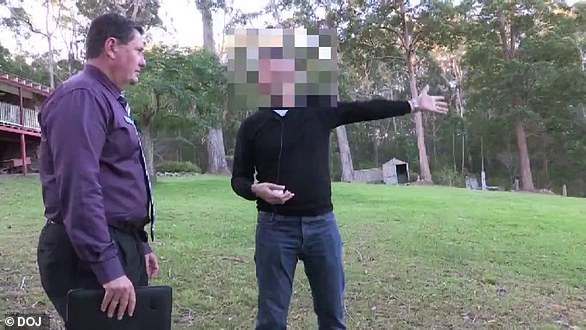 The neighbour told police the foster father (above, in a police walk through at Kendall) came into his yard to search for William and seemed ‘agitated’

Mr Donoghue said that in his original statement he said he left the tennis club ‘about  10.15am’, but that he now accepted CCTV images of him show him leaving about half an hour earlier.

‘Detective Senior Constable Roberts has told me that the camera time is incorrect and is 9 minutes slow,’ his statement says.

‘Detective Roberts has shown me eight images from the CCTV system at Kendall Tennis Club time stamped between 9:32:32am and 9:34:30 on the 12th September 2014.

‘I agree that it is me in the images and that my vehicle, the stone coloured BMW, leaves the tennis club.

‘If what Detective Roberts has told me about the time difference is correct, I agree these indicate I left the tennis club about 9.43am.’

Mr Donoghue later saw a man in his yard on Benaroon Drive – who was William’s foster father – and that had influenced his belief that he had left the tennis club later than the time recorded on the CCTV cameras.

After returning home and having a cup of tea or coffee with his wife, he saw a man enter their yard.

In their police statements, the foster mother said William disappearance around 10.30am, the foster father arrived back from his trip to Lakewood shortly afterward and before she called emergency services. 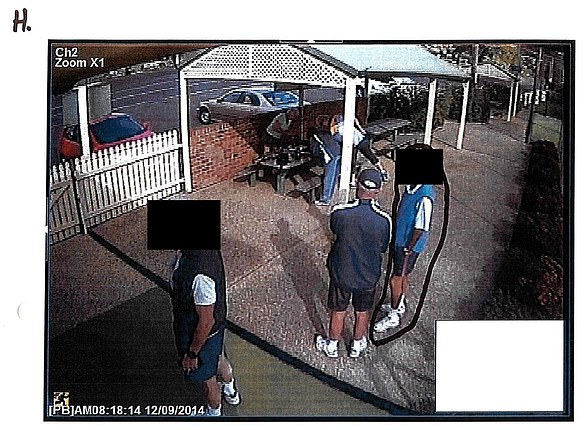 In Mr Donoghue’s September 2014 police statement he described the encounter.

‘The man was agitated. The man was saying, “my boy is missing. I can’t find my boy”.’

‘I heard him constantly calling out the name “William”. He was on his own.

‘I believe this man was the father of the missing child.

‘Before lunchtime on either Saturday 13th or Sunday 14th of September 2014 the man who I believe was the father of the missing child came back to my property.

‘He seemed agitated. He didn’t ask my permission and opened my roller door to my she and went inside.

‘He went through all the bins and cupboards throughout my belongings in the shed.

‘At the time there were a number of SES officers on my property.

‘I saw a photograph of the missing boy William Tyrrell on the news. I did not recognise this boy and have not seen him before.’

Detective Roberts also asked Mr Donoghue if I he was aware of two vehicles, a white station wagon and a grey sedan, parked unusually close together in Benaroon Drive in the days before William vanished.

Details of the cars, were revealed in September 2015 on a 60 Minutes special featuring then strike force commander Gary Jubelin and William’s foster parents.

‘I have no knowledge of those cars at all,’ Mr Donoghue told Det. Roberts. ‘ At the time I watched the program I knew that I had not seen those two cars.’ 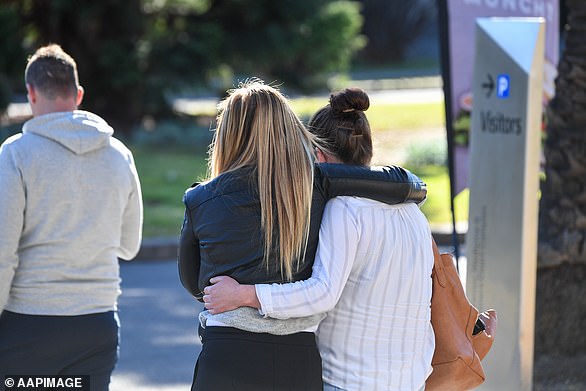 The inquest (above, in 2019 as William’s biological mother, right, attended) will not resume until the current search for William’s remains continues in bushland

Allanna Smith is the person who took on NSW child protection laws so as to be able to reveal that William Tyrrell was a fostered child when he disappeared.

In 2016 Ms Smith, herself a victim in the NSW foster system, fought a legal battle against then then Family and Community Services (FACS) Department backed by Mr Jubelin and the foster parents .

NSW Supreme Court Justice Paul Brereton ruled William’s disappearance ‘while he was in the parental responsibility of the minister, and in the care of departmentally approved carers’ was a matter of legitimate public interest.

Justice Brereton also said at the time William was probably already dead. FACS appealed the ruling, but it was upheld by three judges in the NSW Court of Appeal.

Ms Smith said that while police were operating a high-intensity search at Kendall to find William’s remains, she believed aspects of the case needed to be cleared up by Coroner Grahame and detectives.

Another timeline aspect which she did not believe had been fully explained was the time stamp on the final photos of William.

The images of William Tyrrell in his Spider-Man suit on  his foster grandmother’s verandah underwent forensic examination due to a ‘created’ time with a two-hour discrepancy from a ‘corrected time’.

The iconic photo of William emitting a playful roar photo was used as crucial ‘proof of life’ evidence by investigators to establish a time frame for his disappearance. 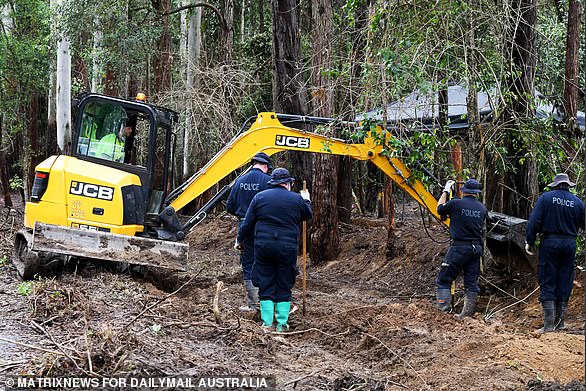 As the latest, high intensity search for William Tyrrell continues at Kendall on the NSW Mid North Coast (above), Allanna Smith said issues need to be resolved back in Sydney

The ‘proof of life’ timeframe was based on when the image was taken (9.37am) and when his foster mother called the police (10.57am).

However, that timeline was thrown into doubt by the photo’s metadata, known as EXIF data,which suggested the picture may have been taken earlier.

EXIF data is a kind of digital fingerprint imprinting the date and time the photograph was created.

The image has a ‘created time’ of 7.39am and a ‘corrected time’ of 9.37am, a new document from the 2000-page evidence brief obtained by The Australian shows.

Police have now been ordered an urgent probe into the 118 unexplained minutes between the time of the photo and when William vanished.

After Coroner Grahame in 2019 ordered a digital forensic expert urgently resolve the time stamp issue, it was determined EXIF data could be displayed incorrectly for a variety of reasons. 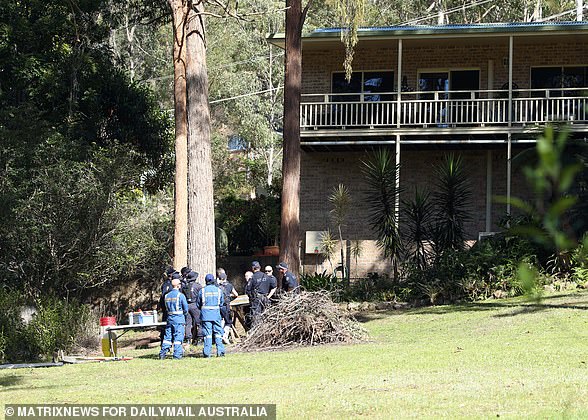 This included the camera’s time and date settings being set up incorrectly, or not changed from the factory settings to real time.

Ms Smith said the community needed answers about that and the scenario suggested by Richard Donoghue’s police statement.

‘It could be put to bed so easily. But it needs to be investigated.

The NSW Department of Communities and Justice, which responds to questions about investigations by the State Coroner, said a new date for the delivery of the Coroner’s findings is ‘yet to be set’.

The inquest was due to conclude in mid-2021, but further submissions and then the new search by Strike Force Rosann have not yet been finalised,