The body finder who helped to locate Daniel Morcombe eight years after he was murdered has led detectives to an entirely new site as they continue to search for little William Tyrrell.

An hour into the search, Professor Jon Olley directed a select team of officers to switch focus across the street from the dig site at Batar Creek Road, at Kendall on the NSW mid-north coast, that they have focused on for nine days.

Officers grimly joked the dense bushland was ‘where they’ve been dumping the snakes’ encountered so far as they prepare to potentially expand the scope of the scope.

Prof. Olley was seen pointing into the thick shrubs as the eight-strong team of officers and rural fire service members circled around him, listening intently.

The ground is still soaked through from a two-day deluge, but the rain eased by Tuesday morning.

An officer at the scene said detectives would begin clearing the dense bushland ‘at some stage’ to prepare for an expanded search area.

He said the task of finding William’s remains was more difficult because it was over ‘a bigger area’.

In 2011, the Griffith University emeritus hydrology professor spent two months with a team of hydrologists and archaeologists searching on a steep swampy site near the Glasshouse Mountains on Queensland’s Sunshine Coast.

They found two shoes and three bones belonging to Daniel Morcombe, 13 years old at the time of his murder, whose body had been discarded by killer Brett Peter Cowan at the site in December 2003.

William Tyrrell’s foster grandmother’s home is now owned by a very private man who has nothing to do with the case or the family, and is now forced to have the national media parked on his lawn and police digging up his property.

William’s foster grandmother offloaded her two-storey, three-bedroom home on Benaroon Drive in Kendall, on the NSW mid north coast, within six weeks of the three-year-old in the Spider-Man suit disappearing from her front porch.

The boy’s foster parents had travelled to Kendall to visit his grandmother, then aged 81, who was in the process of selling her house at the time.

She was under no legal obligation to declare the grim recent history of the home to the new owner and her identity, like those of William’s foster parents, was suppressed.

The deal with the new owners and William’s foster grandmother, who has since died age in her 80s, was quietly completed by October 31, 2014, property records show, just weeks after he went missing on September 12.

William Tyrrell (pictured) vanished from his foster grandmother’s house in Kendall, on the NSW mid north coast in 2014 sparking an enduring police investigation 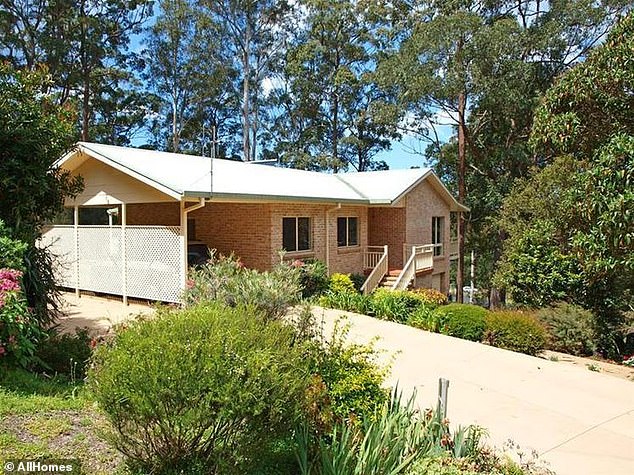 It is unclear whether the foster grandmother remained in Kendall after the sale of her house.

Less than 12 months after the new owners settled, they listed the home again. This time, it was sold through a local real estate agent.

The property was advertised as a ‘great home that needs to sell’ equipped with a master with walk-in wardrobe, ensuite and large workshop and storage area under the house with a full length verandah.

‘A no-through road makes this a very private property indeed… The owners would like to move in the New Year so inspect and make an offer,’ the description read.

The owners, who were looking to offload the property were not interested in making a profit, and sold the three bed, two bath brick home for $430,000, which is the same price they paid for it. 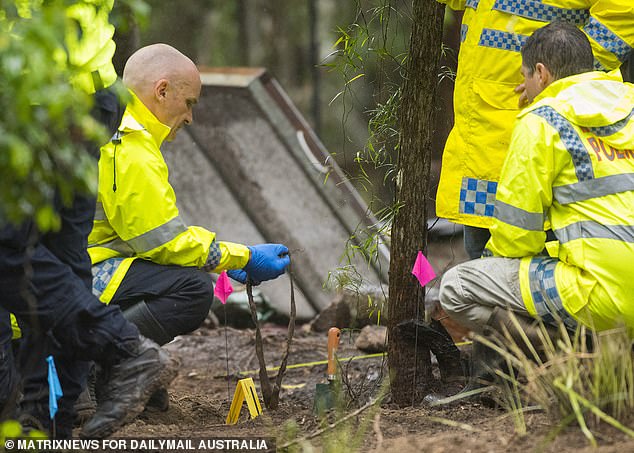 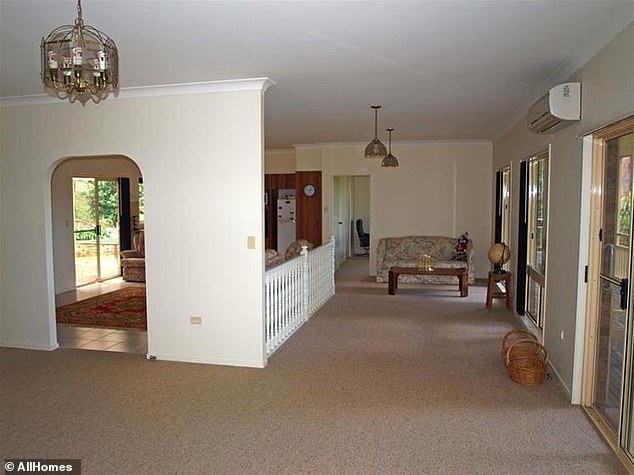 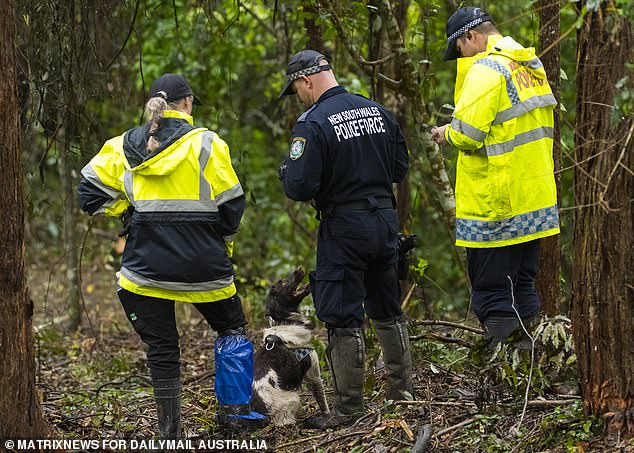 Officers, including members of the dog squad, scoured the area on Monday (pictured)

While there was no requirement to divulge William’s connection to the home, Daily Mail Australia understands the agent opted to share a detailed history of the police operation before the new buyer settled.

The buyer reportedly went ahead with the sale knowing it was where William was last seen.

At the time, the home was not considered part of the investigation and the foster family had been ruled out as persons of interest.

Last Monday, dozens of officers descended on the new owner’s home and told him they were investigating whether William’s remains could be on or near the property.

For the second time since moving into his quiet, peaceful dead-end road toward the back of Kendall, the man – who Daily Mail Australia has chosen not to name – found himself at the mercy of detectives simply doing their jobs.

‘I feel really, really sympathetic for him,’ one local who has lived in town all his life said. ‘I just am really sorry for him.’ 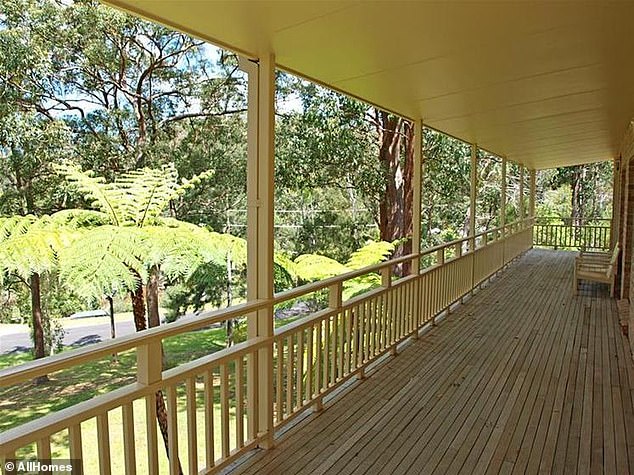 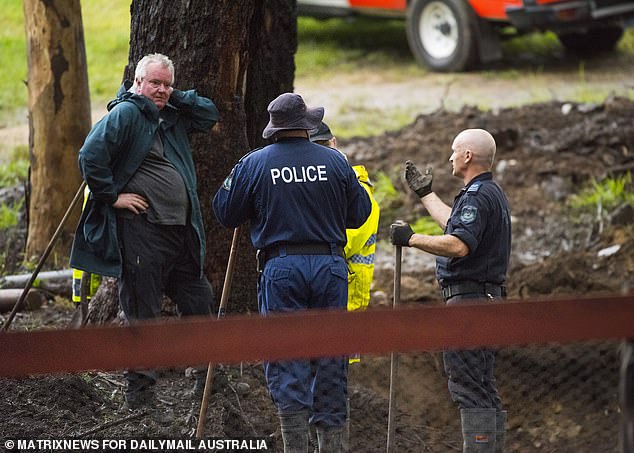 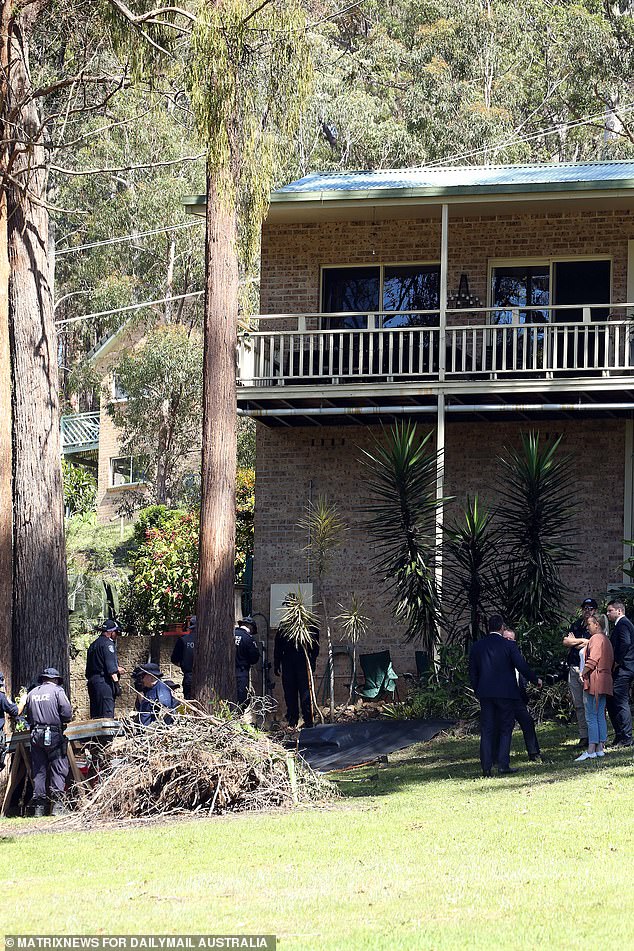 He’s spent the last eight days holed up inside with only the company of his pet Rottweiler, occasionally stepping out to run errands.

The man has tried to keep a low profile as reporters camp out the front and police traipse through his property hunting for clues.

A specially trained cadaver dog was brought in to scour underneath his home for evidence, his garden bed has been dug up and a concrete slab laid in the garage of the home was scrutinised by the Australian Federal Police using a ground penetrating scanner.

The AFP’s Forensic Imagery and Geometrics team looked into any abnormalities under the slab by bouncing an image off the machine’s radar. 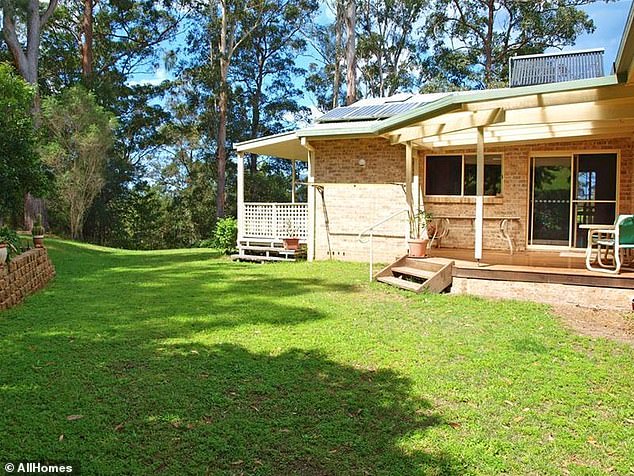 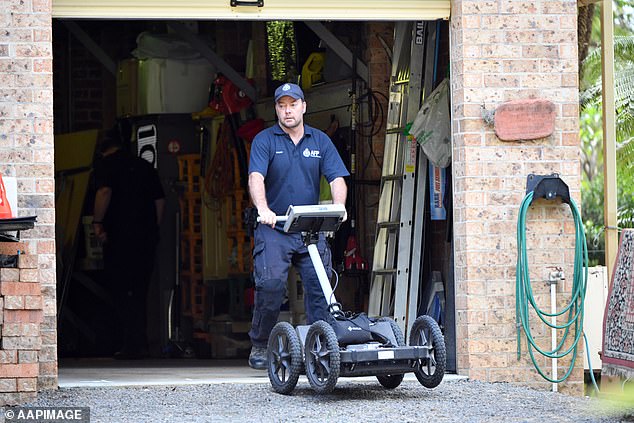 Despite the inconvenience of the search, police sources said the resident has been nothing but helpful and accommodating with officers and scientific experts.

He, like his neighbours and the wider community, are said to be hopeful that this search will yield a different result than in the past.

‘This is the single worst thing that’s ever happened to us here,’ a neighbour said. ‘We all want William found and to put him to rest if that’s what it’s come to.’

But this reinvigorated search has others on edge. It’s not the first time they’ve heard whispers of a breakthrough in the case, and many are wary of getting their hopes up again.

Police revealed new information had led them back to Kendall, and three dig sites in particular identified as potential covert burial sites have become the focus of their efforts. 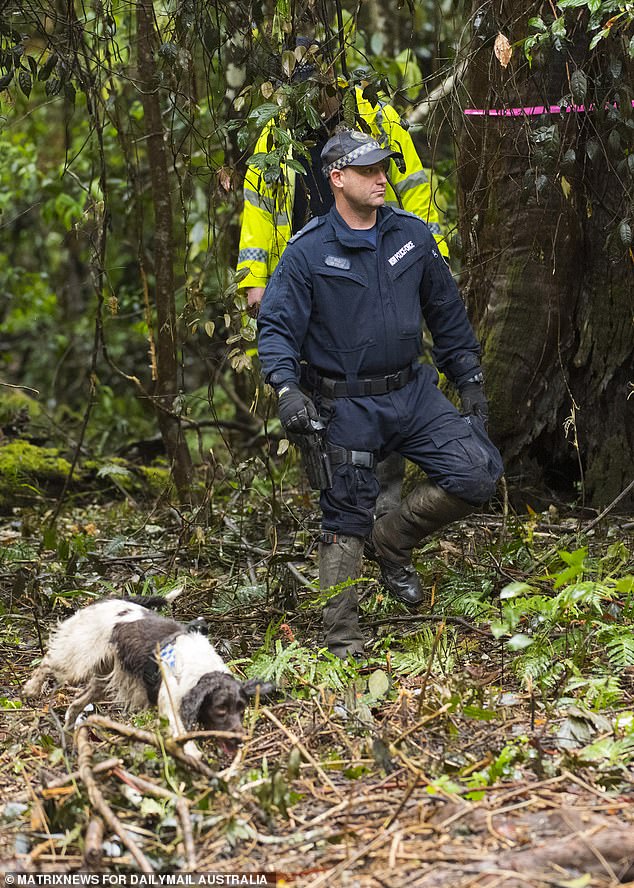 Detectives are prepared to scour up to one square kilometre of bushland near the home, certain that in doing so they’ll find William.

Given the meticulous nature of the search, such a large area could take months to thoroughly examine.

On Monday, the dig was slow moving and tedious as detectives battled grim weather conditions, but three more items of note were found in the soil by late morning.

Evidence markers ‘H’, ‘I’ and ‘J’ were placed at Area 1 of the three-pronged search, marking the eighth, ninth and tenth items taken for further forensic testing.

Daily Mail Australia understands the items were unusual and ‘not supposed to be there,’ but police are yet to determine whether they’re relevant to the search. 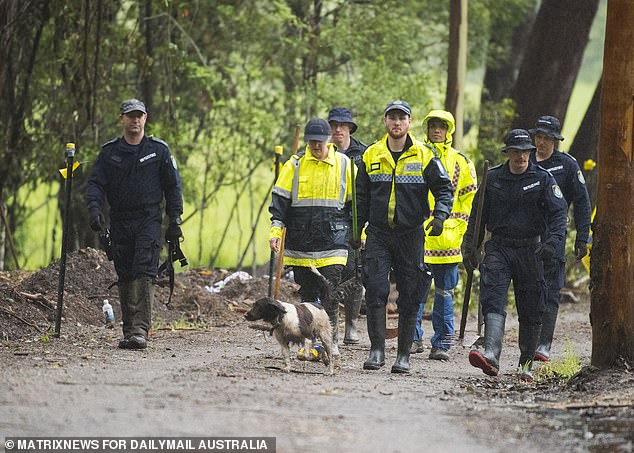 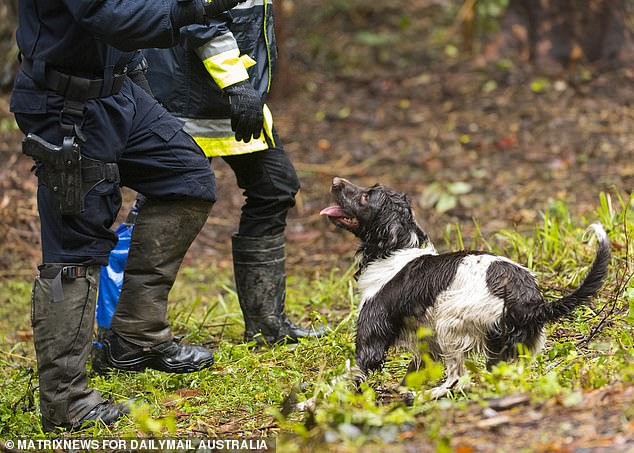 Officers have been digging up pieces of fabric and comparing them to a laminated picture of the Spider-Man suit William was wearing when he disappeared for a week.

Shortly before the team broke for lunch on Monday, one officer dug up a piece of torn cloth covered in mud.

The frayed fabric appeared similar to a hessian bag police pulled from the same area on Saturday.

A police spokesman downplayed the find, noting it would be sent to forensic analysis along with eight other samples collected in the week since the renewed search began. 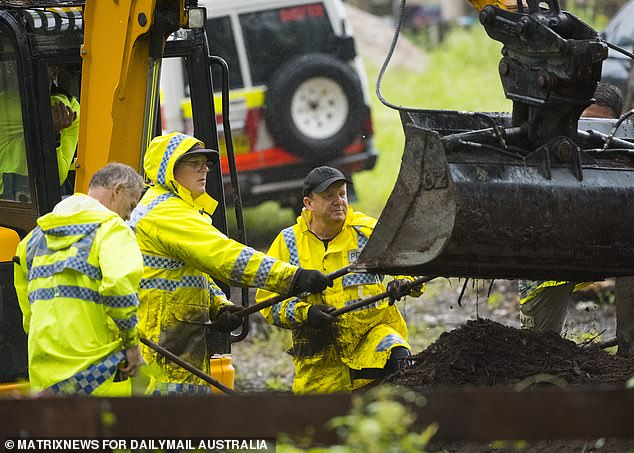 What William Tyrrell’s foster grandmother told police: ‘I can’t think of anyone who would want to harm him’

Before she died at the beginning of 2021, a statement from William Tyrrell’s foster grandmother about the boy’s disappearance was tendered at a coronial inquest.

In the statement the foster grandmother said she had two theories about the boy’s disappearance, but added: ‘I can’t think of anyone who would want to harm William.’

The first theory she shared by police was a man who lived alone on her street, Benaroon Drive, Kendall. Her second was that William may have walked down a nearby highway with ‘lots of traffic moving back and forth’.

On the morning he vanished, September 12, 2014, the foster grandmother recalled William was ‘full of beans … jumping out of his skin with energy’.

‘William was dressed in his ‘Spiderman’ costume … While he was playing out the back patio he started roaring like a tiger and told us he was the ‘daddy tiger’.

She said her daughter took the famous last photos of William on the property’s balcony and had been contemplating feeding him morning tea. It was about 10.30am.

‘William lost interest in drawing pictures and rolling dice and he ran down the two small stairs of the back patio, onto the grass and he ran around the right hand side of the house (to the front).

‘That is the last time I saw William.’

‘About five minutes had passed and the female foster carer said: ”Mum, he’s a little bit quiet’ and she walked off the back patio in the direction of where we’d last seen William.’

She next saw the foster mum standing out the front of the house speaking to a neighbour and calling out William’s name.

‘The female foster carer walked back to the house and told me she was calling the because she couldn’t find William.

‘The police didn’t take long to get there and I remember the officer saying he wasn’t far away when the call came in.’

She recalled how the foster carers had travelled up as she was in the process of selling her house as she needed something smaller.

She said William’s foster parents were concerned ‘that I was going to do the wrong thing, so they decided to come up to Kendall’.