By Inderdeep Bains Deputy Chief Reporter For The Daily Mail

The trove of leaked data, hacked from the authorities, reveals a sickening shoot-to-kill policy for those trying to escape while horrific pictures appear to show shackled prisoners being tortured.

The leak exposes how thousands of Uighurs have been detained on trumped-up ‘terrorism’ charges and given long sentences.

It provides an unprecedented insight into the camps built since 2017 across Xinjiang in northwest China. Critics say ‘the Chinese propaganda veneer’ has been blown apart. 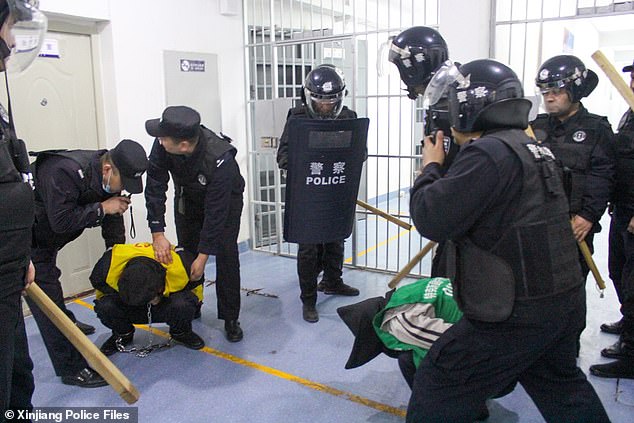 Repression: Police carry out an exercise at a Uighur detention centre in Xinjiang

In one particularly disturbing image, two young men are shackled and hooded as they are held in stress positions at gunpoint.

It is not clear whether the pictures are of actual detainees or a training exercise but is evidence of the brutality believed to be being meted out by guards.

The classified haul, dubbed the Xinjiang Police Files, lays bare how more than 20,000 Uighurs were held between 2017 and 2018.

The images show they are far from the willing ‘students’ China has long claimed.

The police protocols describe routine use of armed officers in all areas and the positioning of machine guns and sniper rifles in watchtowers. In many of the images the threat of physical force is visible, with guards brandishing rifles and batons. 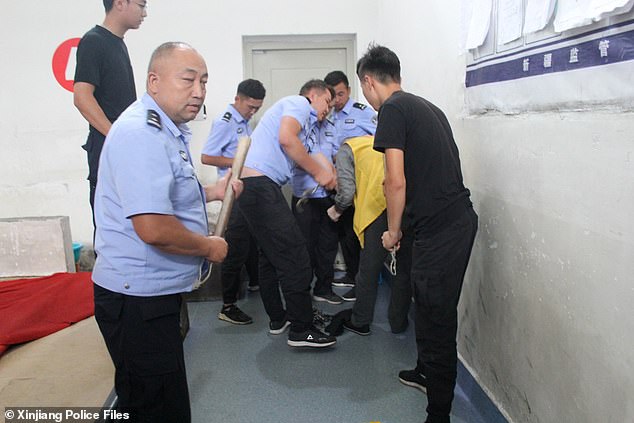 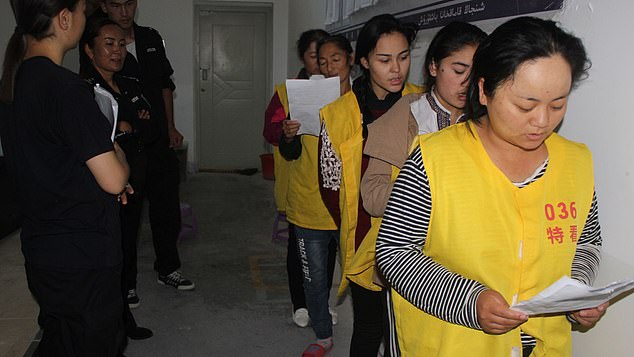 Blindfolds, handcuffs and shackles are mandatory when any ‘student’ is transferred between facilities. The files revealed the terrified faces of nearly 3,000 detainees.

Many have been jailed for ordinary signs of the Islamic faith including a man given ten years on terrorism charges for ‘not smoking or drinking’. His mother was targeted by the authorities for ‘guilt by association’.

A list of ‘relatives of the detained’ show that thousands were placed under suspicion by the authorities. Others were punished for visiting Muslim countries or, in the case of a man, jailed for nearly 17 years for growing a beard. He was said to be ‘under the influence of religious extremism’.

Many are punished retrospectively for supposed crimes carried out well before China launched its crackdown on the region in 2014 following two terror attacks blamed on Islamic extremists from Xinjiang. 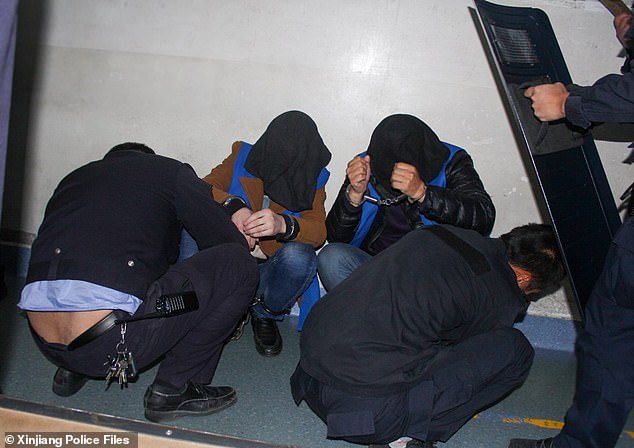 Hooded prisoners cower during a supposed drill at the camp

Examples include a man jailed for ten years for studying ‘Islamic scripture with his grandmother’ for a few days in 2010. Hundreds are targeted for using mobile phones to listen to ‘illegal lectures’.

Dr Adrian Zenz, a scholar at the US-based Victims of Communism Memorial Foundation, received the cache from a source who claims to have decrypted them from police computer servers. He said: ‘We have everything – we have confidential documents. We have speech transcripts where leaders freely talk about that they really think.

Beijing officials including foreign minister Wang Yi have claimed the camps are ‘schools that help people free themselves from extremism’.

And in a written response to the leak, the Chinese embassy in Washington DC said: ‘Xinjiang-related issues are in essence about countering violent terrorism, radicalisation and separatism, not about human rights or religion.’ 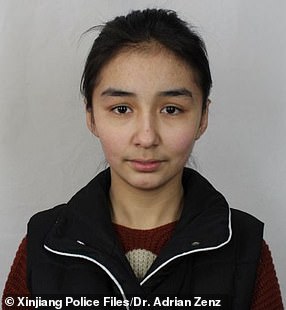 The youngest Uighur detainee was just 15 when she was held by the Chinese authorities over a family connection.

Rahile Omer was targeted because her Muslim mother was serving six years in prison for allegedly disturbing ‘the social order’ by following ‘extreme religious practices’.

Her father had already been sent to a ‘re-education camp’. 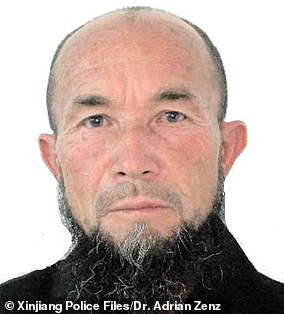 16 years for beard: Tursun Kadir was made to shave 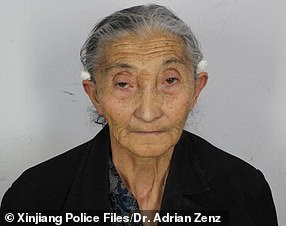 Rahile’s mugshot is in a data leak of thousands of Uighurs targeted on trumped-up terror charges. They include the oldest detainee, 73-year-old Anihan Hamit, who was held on unknown charges.

Tursun Kadir, 58, was charged with the crime of ‘growing a beard under the influence of religious extremism’.

Also accused of preaching and studying Islamic scripture dating back to the 1980s, he was sentenced to 16 years and 11 months in jail.

Photographs show him both before and after the Chinese determined his expression of Uighur identity as illegal and ordered him clean shaven.

He was locked up alongside Yusup Ismayil, 35, who was punished for travelling to a ‘sensitive country’ – believed to be any nation with a large Muslim population.

Tajigul Tahir, 60, was put under suspicion because her son was jailed for ten years for ‘strong religious leanings’ – the evidence being that he didn’t drink or smoke. She was also accused of illegal preaching